I am just going through my spare parts and I am gathering a lot items I won’t ever use again. If you have any interest let me know and/or make an offer.

Here are the pictures! 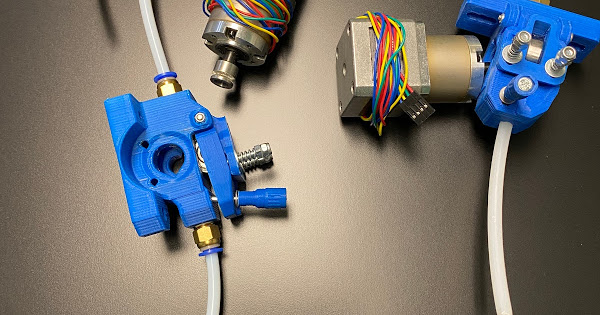 3 or 4x genuine E3D V6 (Bowden) hot end extruders with .4 mm nozzles 12 or 24 volt heater blocks and 30mm cooling fans (I have some of each). At least one is new and unassembled some are VERY lightly used. $5 each plus shipping.

2x Wade style hobbed bolt extruder drive assemblies. I’ll give these away to anyone willing to pay for the shipping.

2x Bowden style extruder assemblies. (Blue in the pictures) The kind that need a stepper motor with planetary gear step down. One is made for a side mount the other is made for Pass through mount. meaning they will bolt to the side of a wall or pass through the wall. I would prefer to sell these with the motors.

2x steppers with enclosed greased planetary drive gears (14 to 1 step down gearing)
with 3 mm drive … I forget what it’s called… (Hobbed Pulley Drive gear?) the metal thing that touches the filament and gets locked onto the motor with a grub screw. Specs for the Stepper motors. http://www.kysanelectronics.com/graphics/1040220.pdf
I will sell each motor with a bowden extruder assembly for $20 plus shipping from Colorado.

A full V3 dual extruder toolhead for a Lulzbot TAZ 3D printer. I may just list this one on Amazon as used since it should be used with a Lulzbot TAZ printer.

I’m definitely interested, I’ve actually been printing the parts for the V1 printer because someone gifted me a few rolls of brand new 3mm PETG.

I figured that I would pick away at slowly assembling something that would work. So I don’t know what I need, but I’ll definitely buy some parts off you!

Sounds good. I’ll make sure I get pictures available tomorrow. Too busy today. The MP3DP. I never built that printer my self but I am sure someone has posted a mod for an E3D V6 Bowden extruder for it.

I have a V6 on mine, but it isn’t a bowden and I mounted it by the motor. I like it and the mount seems quite robust.

Yeah… yours is a great printer. Great work on that. Beautiful build. but I am pretty sure your uses a 1.75 mm filament hot end.

If he uses my 3 mm filament hot ends he will need to either use a Bowden system or some sort step down direct drive. That’s just the way it is with 3 mm filament. The pressure required for 3 mm filament needs to be stronger to get it through a nozzle. That is why most people (Like me) are moving away from 3 mm to 1.75 mm filaments on their machines. I know you know that already. I say it here so others know it as well. In any case I found this on thingiverse so it would not involve CAD work to get running with a Bowden setup. 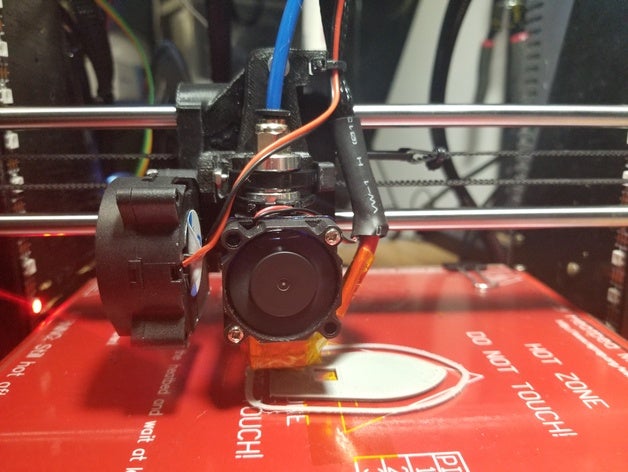 I wanted to create the simplest possible E3D V6 bowden mount as possible for the MP3DP. This mount uses 3 zip ties to mount the bowden to the frame, one large one and two small ones. The large one goes on the top acrossed the 5mm gap and does most of...

Well I appreciate any of the info that I can get, as I know very little on the subject.

I also don’t have a plan!

So I’ve been basically spinning my wheels trying to think of an offer but I’m totally clueless! Can you give me a ballpark of what you’re hoping for?

Hello Hidyn,
Sorry for the long post. I have added a lot of info to the original post including pictures, specs and requested prices.

Since you are relatively new to 3D printing I feel that I should make sure you know a little more about your options before you make any choices. 1.75 mm filament has become more common so most stores and vendors have more options for brands, colors and material in 1.75 mm. The 3 mm may also sell less often so your spools that you buy from a store “New” may be older than the 1.75 that was next to it on the shelf. Also 3 mm filament needs more force and pressure to smash it through a hot end nozzle. That is why the extruder motor must use a gear down system so the motor spins several times for each turn of the Drive gear. The MP3DP was designed to use 1.75 mm filaments. Finding a mod that uses a gear down Direct drive extruder may be difficult.

I converted all of my printers over to use 1.75 mm filament. Mainly I was tired of stocking both 3 mm and 1.75 mm inventory. With that said. There are still some advantages to using 3 mm filament. Specifically when used with a Bowden setup. First I will suggest you watch this video so you know the difference between Bowden and Direct Drive as well as some of the Pros/Cons.

Cons:
Harder to load the filament into the printer. By hand you have get the filament to the motor. After that you need to use some sort of Controls to have the motor load the filament the rest of the way to the nozzle.
There is enough wiggle room in the Bowden tube from the motor to the Nozzle that the filament can squish and rub against the sides of the tube. That means the longer the tube the more motor force will be needed to push the filament. This usually isn’t a problem unless you want to use flexible filaments like TPU or Ninjaflex. That can be VERY difficult to use with a bowden setup.
Need to use longer retraction settings to prevent filament from oozing out of the nozzle.

Back to the advantages of 3 mm filament. It is easier to reliably use a bowden setup with 3 mm filament. Because the filament itself is stronger and will hold its shape in the tube better. It is also a LOT easier to print using flexible filaments that are 3 mm vs 1.75 mm. When printing NinjaFlex in bowden setups I was able to use 3mm filament but could not get the 1.75 mm to work.

Can you use 3 mm filament in a Direct Drive setup? Yes. That would be easier to do with a Wade gear extruder. Like the two I have listed for free. You would just need a nema 17 motor. The other difficult thing would be finding parts that would make it so you could mount a Wade extruder onto the MP3DP. They may exist on thingiverse but I am not sure.

If you are up to the challenge of implementing a bowden system then you might as well go the extra mile and consider this mod for the MP3DP.

Think about it. Let me know if you have questions or are still interested.

Aaryn is a super nice guy!

Well I’ve done a little bit of thinking, and I think that you’re right about attempting a dual Bowden set up.

I’d be willing to take the whole parts box, honestly. Well outside of the tazbot extruder, it looks like you could make a fair bit on that one to a tazbot owner! I fell out of my chair when I saw the price on that!

Anyways that gets me a lot closer to one very slick printer, and an excuse to build a direct drive printer #3, which should be even more custom-er!

I’ll PM you my address, so you can figure out what shipping will be and I’ll send you an e-transfer for the total?

Also, I’m in no rush at all, not even a little bit. This is one machine that doesn’t have a deadline, and no purpose outside of experimenting. So please don’t be rushing to the post office when it’s not conveniant!

Edit: Hold that thought, I just realised that I need to think a little harder about payment! I’m up in Canada and I’ve never sent money to a private citizen in the states before. I’ll hopefully update shortly here when I sort this out!

Sounds good. That gives me a little time to make sure I have every scrap of 3 mm hardware included. Things like PTFE tubes fittings.

Wonderful! We’ll get you free and clear of those pesky 3mm parts!

Pretty happy to be able to source parts from the forums!