So the reason im on this forum at all was because I felt the need to make an MPCNC to keep my 3d printed chess set dream alive.
Buying a board or having someone else cut it just wasnt going to pass mustard for me.
So after
80 hours of 3d printing chess pieces.
130 hours of 3d printing MPCNC parts.
25 hours putting together the MPCNC (testing, etc etc etc)
10 hours testing cuts, fixing crap i broke etc
2 hours final cutting.
2 hours staining etc.
5 hours editing

It has been completed Nice, Congratulations on finishing it. Long project for sure.

So, you can always slap an extruder on the cnc and fully print your board. Or, just throwing this out there, 2 heads, to print multi-color…

Great video I watched most of it, while prepping extruders. Sounds like you learned a lot can’t wait to see you next project.

Yeah i know i could have technically printed the board… Although I wanted the utmost quality. a light, 3d printed board just wouldnt have done it.
Even with a metal filament, or 100% infil or anything like that it just wasnt what i was going for.

This was the perfect solution. And Im super stoked I built the MPCNC anyway. i am going to order a laser (i think, i should right?) to do some stuff too. however im sure ill own a glowforge later this year.

Not sure whats next, thinking about that

Very nice, Ryan LB! Definitely get a laser - I’m having a blast (and making some money) with mine!

im working on another project quickly before that… but a pressing question… when you turn on the laser, how do you prevent it from just burning through whatever you are pointing it at? it is a freakin laser :)like if i want 1/4" cut, how does it know to stop, since again, its a freaking laser

Very nice project, it turned out great. I also enjoyed your video!

Dave
PS. I also think it would look good in Cardinal and White (ON WISCONSIN)

Hi Ryan LB, the laser burns a certain depth based on the power and the speed. You just need to experiment a little with whatever you’re burning on. Jtechphotonics’ website has some recommended speeds for various materials, too. I mostly just use mine at full power and adjust the speed for what I’m doing, unless I’m doing burning a greyscale image, a la image2gcode.

For example, when I’m burning pine plaques/signs, I use full power at 800 mm/min. It burns about 1/16 inch deep and looks great. If I were to try lasing oak, I might slow it down to 300 mm/min and see how that looks. I’ve cut vinyl and felt at about 1200 mm/min. I’ve etched letters in acrylic at 800 mm/min.

If you’re going to cut something thicker than paper or heavy cardboard, you’ll probably need to make several slow passes, lowering the laser a little each time. Jtechphotonics says that the 2.8w laser can cut 3mm plywood in 3 passes. I haven’t tried that, but I tried 5mm (1/4 inch) plywood, and it did cut through eventually (in like 8 passes), but the edge was a smoking ruin. Haven’t had another chance to try cutting again.

I’m assuming you got the 2.8w laser from jtechphotonics, or used Leo’s instructions to build a similar setup. If you have a 40w CO2 laser set up on your MPCNC, forget my advice - you’re on your own! But I want to see pictures LOL!

And since you just got your laser, don’t forget: Always wear the correct laser eye protection!

wee bit larger focal point so not quite as good at engraving as the 2.8w, but close… Kind of the best of both worlds for cutting and engraving.
I have it mounted to the universal mount, but my laser sights i ordered are too wide, so I either need a new print (with larger holes) or buy different lasers.
so do we know who ductsoup is on thingiverse? id love to have the cad file, so i dont have to wait 2 days for lasers, instead i can just edit those openings 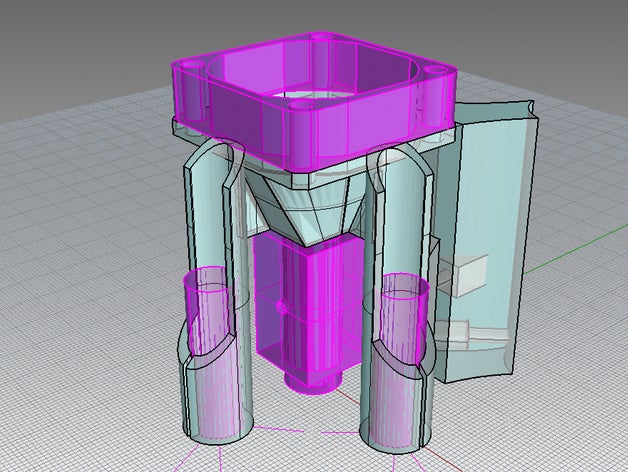 No cover so there's potentially some additional ambient cooling benefit (it also looks cool with the danger sticker visible). At very least without the cover it's less to print. Added a duct to better direct the air flow over and around the heat...

Wow, that was great, wish my interest in normal printing turns and evolve in an idea of 3D.