Howdy!
Have most of the parts done for a lowrider2 and will be starting the build there shortly but having a hell of a time printing multiple objects at once for some reason. Reddit hasn’t been much help and I’ve exhausted every way of describing this to google for searching with no real answers so hoping y’all can help. 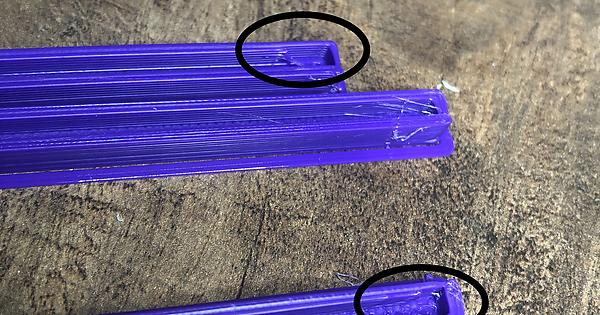 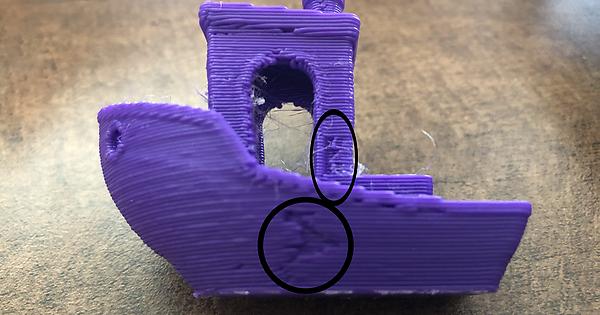 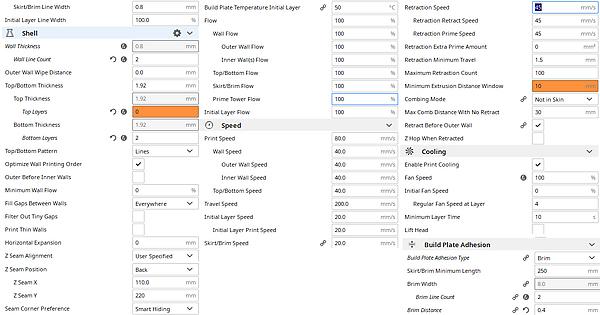 It seems to be retracting before it moves from one object to another on the bed but I can’t for the life of me figure out the setting to adjust.

Any help is greatly appreciated!

All your numbers seem pretty crazy to me, 200mm/s travel 45mm/s retract? Those would not cause it though.

I suspect the 10mm extrusion distance window is the problem, try 1mm. If that is what I think it is that means it will not extrude anything less than 10mm…there are a lot of small under 10mm lines in a print. I have not used cura in 6years or so though.

If you still have issues try another slicer, none of those numbers seem right to me. 0.8mm width and .48mm height, what size nozzle are you running, can your extruder handle that?

i have to disagree Ryan, the extrusion distance window is the distance that the maximum retraction count is enforced in. so based on the settings shown it will retract 100 times within a 10mm distance. pretty standard really. but 1.5mm retraction for a Bowden extruder with that long of a PTFE tube seems short to me, i run 5mm on my ender 3 and from the looks of it the ender 5 has a longer tube.

edits because i cant spell at midnight after 3 drinks

also apparently i cant read, disregard the part about the retraction distance, i missed that you have upgraded to a direct drive extruder on my first read.

another thought, have you calibrated your E steps? i have seen that sort of issue when the E steps are off by 5% or more.

the extrusion distance window is the distance that the maximum retraction count is enforced in. so based on the settings shown it will retract 100 times within a 10mm distance. pretty standard really.

Interesting, Still not understanding it but s3d and prusa/slic3r don’t have that setting. I agree, though that is not the issue here then. All the rest seem odd to both of us now. I would try another slicer or double check everything you have there. if you have a .4mm nozzle than a 0.48mm layer height will not work. Depending on your extruder like I said before 48 is fast, I have one that can not handle more than 24mm/s but it is geared. I believe 30 is a common number.

printing at 80mm/s with huge width and thickness is probably a major factor here. unless you are using a 0.6mm even then you are probably in volcano territory with that sort of setup. 45mm/s with a 0.5mm (110%width infill) nozzle is about where I start to run into some issues with heat on a standard v6 heat block.

Since when did I stop capitalizing things…efficiency? Less keystrokes?? Lazy???

Interesting, Still not understanding it

I don’t think that Atom’s desciption is correct, I’m pretty sure this minimum extrusion distance window is there to avoid small infills, meaning it will not extrude stuff if said stuff’s path is shorter than 10mm in this case.
I think this number is a bit too high, usually I’d use 3 mm or less, but the bigger the print the bigger it should be, to avoid losing lots of time to tiny useless stuff.

From my point of view, the print issues are linked to the retraction part of the process, and more specifically to the prime part.
Basically, what I think is happening is that the printer retracts the filament, moves, but some plastic oozes. Then it starts printing again but since some plastic is missing it will take a little bit of time to reach the operating pressure in the nozzle, hence it won’t extrude for a few millimeters.

So, try to put something like 1 mm in the “retraction prime extra amount”. It should solve the root cause of the issue, maybe try some different values until you find the best one.*
Also, and this is an important one too, do not use the “retract before outer wall” feature. My guess: just unticking this box will solve 90% of your problems. So start by doing this.

*It is to be noted that this way of doing it isn’t the best one. Nowadays there are some better ways to do it, so if you want to do things right then you should look at the feature called linear advance (it’s a feature of Marlin firmware, it’s not in the slicer). Linear advance will give you the best results by controling actively the pressure in the nozzle.

Actually no because it will never reach that speed.
All slicers have a maximum flow parameter, which usually depends on the path thickness, width and speed. It is a fixed value in mm3 per sec that most people won’t ever fiddle with, because it’s usually hidden in the advanced parameters.

The printer will always stick to this maximum limit, and it does that by lowering the speed. The ultimate goal is to avoid skipping steps on the extruder side, because it can only deliver so much plastic with a given nozzle diameter.

So my guess here is that, given the height and thickness of the paths, the printer will never be able to actually get to 80mm/sec, it will slow down because of the maximum allowed nozzle flow. Otherwise it’ll start skipping steps on the extruder side, but from what I see on the print’s picture it looks like its extruding fine (aside from the beginning of each path, obviously).

Interestingly enough you can print at almost any path width and height with any nozzle size, so if you want you could print a 1.2mm width, 0.6mm height path with a 0.4mm nozzle. It will take forever to print because of the maximum flow, but it would work just fine.

Just for reference here is the retraction window setting as described by all3dp:

Here is the full article:
https://m.all3dp.com/2/ender-3-retraction-settings-all-you-need-to-know/#:~:text=Maximum%20Retraction%20Count,-The%20Maximum%20Retraction&text=The%20original%20setting%20in%20Cura,slicer%20won’t%20enforce%20it.

keep this number close to your Retraction Distance, then work with your Maximum Retraction Count to ensure you don’t damage your filament.

This makes much more sense. If you are retracting 5mm, and you retract 10 times on that same filament, you might destroy that chunk of filament. By restricting it on that particular 5mm of filament, you can avoid that problem.

Ok. I didn’t make that any clearer.

Also, the name for that setting is awful.

Yes that is All3dp’s recommendation, though the cura default is 10mm. And I agree it is a horrible name, I have a plug-in for cura that gives details on each setting, with explanations on how it is used and examples. It is probably one of the most useful plug-ins I have XD

Thanks for the thorough replies! My base profile was CHEP’s On an ender 3 but that was for a .4mm nozzle and I’m running .8mm. I’ve used it pre-direct drive with a lot of success at the listed speeds but since putting the direct drive on I haven’t been able to get it behaving properly.

Will run through recommendations above and post results this afternoon. I have tweaked extra prime amount and that reduces the issue but doesn’t eliminate so I think that masks the root cause.

Thanks again for the input!

if your still having issues, i will get with a friend of mine, he uses the micro Swiss on a CR-10s i will see if you cant shoot me the cura profile he usses, maybe that will help.

Ah ok, my bad!
I’m using a different slicer and this parameter looked a lot like something I had in mine.

So quick update. I’ve dropped speed to 40 mm/s & 20 mm/s on walls, increased temp to 205 and run the minimum extrusion distance window from 1, 3, 5 & 10 mm. There is essentially no change except for the location of the error. Running at 80mm/s it was a little more exaggerated than at 40 mm/s especially when I dropped retraction to 0. I have a final test running now with 1 mm^3 in extra prime as I think that’ll address some of the issue but already have compiled the firmware with linear advance enabled as I believe that to be the root of the issue after @forcerouge’s recommendation.

More to come and will post pics before I call it a night.

Do not forget this one, it’s arguably the most important in your case, this should at least make all the weird defects on the benchy’s hull disappear:

Also, and this is an important one too, do not use the “retract before outer wall” feature. My guess: just unticking this box will solve 90% of your problems. So start by doing this.

Yeah, I disabled that in the last run after running through extrusion distance window. I didn’t see any improvement over the version where it was enabled. Only difference from yesterday was I dropped the walls of the print to 1 which shows up on pictures a little better compared to running at 2 walls yesterday.

You can see in image below no real improvement after disabling retraction at wall where extra prime helps but I really think the right solution is linear advance at this point. 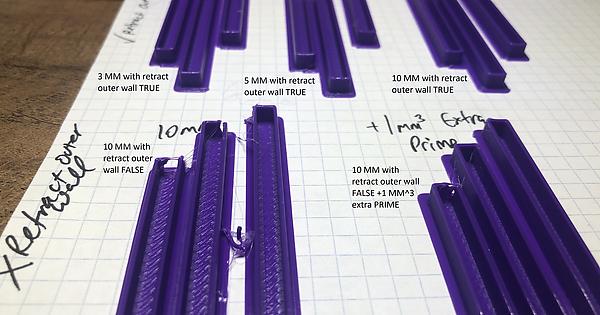 Of course you cannot see any improvement with this parameter if you only run one loop. It will only be effective if you run at least 2! The purpose is to make the outside perimeter look good, it will have no impact whatsoever on the start of any other path, so if you have just one path then you’ll still end up with a hole.

Try the benchy with this parameter turned off + extra prime, no need to finish the whole benchy, just print half of it with at least two walls, just like you did before. It should end up much better. I expect in particular that it will get rid of the defects in the red circle, maybe also those in the black circle: 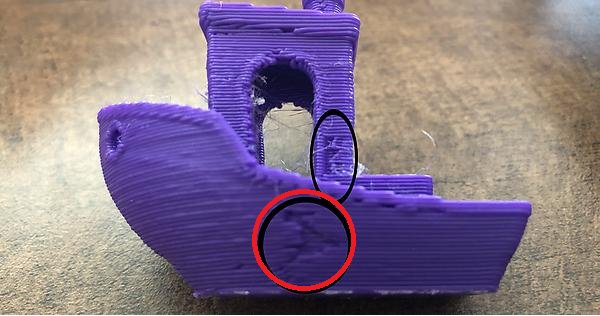 But yes, linear advance should hopefully fix that, though it is not 100% guaranteed, I had a printer which had the same defect and linear advance didn’t fix it, I had to go with extra prime because I couldn’t completely stop the oozing no matter what I tried. Might be the case for you too, because you try to extrude a lot of material through a tiny nozzle, so it needs to build a lot of pressure.

I guess I should have mentioned my initial use case was a 1 walled box I want to batch out with 7 to 9 at a time. The 0.8mm nozzle is better for my attention span since I’m mostly doing garage/shop organization items. Running linear advance tuning now.

I guess I should have mentioned my initial use case was a 1 walled box I want to batch out with 7 to 9 at a time.

Ah ok, in this case then yes, the retract before outer wall parameter won’t make any difference indeed.