Hello! I’m Patrick. I’ve been thinking for awhile about building a full 4’x8’ lowrider2. I figured if I’m going to do it, I might as well go big. The only thing is that I work out of a 2 car garage (that my wife would rather like to keep parking in) so I don’t have space to dedicate to a table full time. So I designed a flip up version.

I’ve currently assemble the gantry. Next I need to assemble my dust boot, attach the router, and do all of the electronics.

One question I do have, are the end caps on the z rails (I think they’re called the xz parts) supposed to fit flush with the Z rail? I think my rails aren’t quite parallel, but I’m not sure how to actually adjust it to get them parallel and allow those parts to sit flush. Does it matter to much? The whole axis can move up and down quite easily by twisting the lead screw, so it can’t be too out of square, but I’m worried it’ll affect cut accuracy.

I’d like to upload more details, but as I’m a new user, I can only do one link and no files for the designs. I’ll work on commenting more, so I can hopefully get it all uploaded.

Here, I think I can upload one picture at a time.

Here’s my first page of drawings: 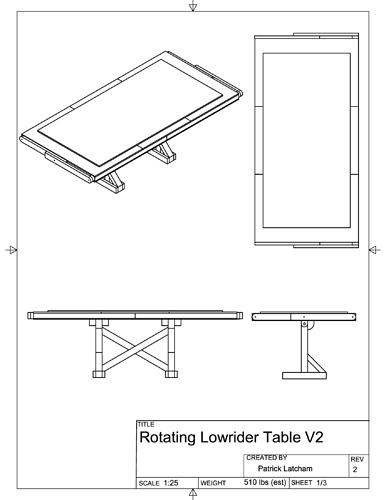 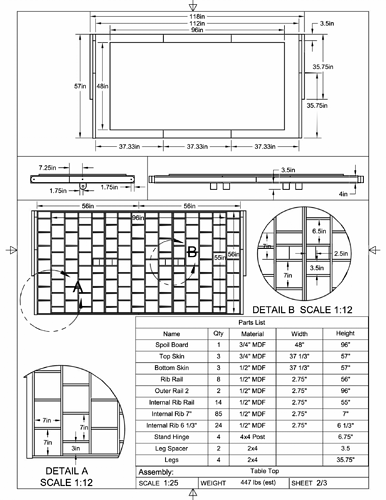 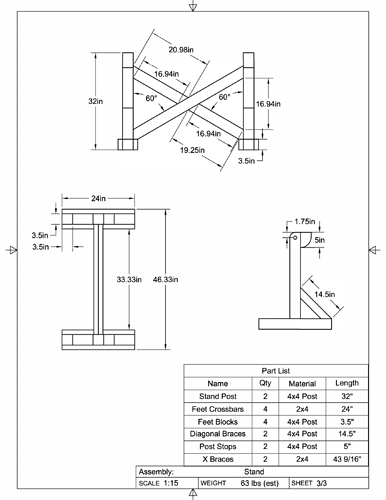 I have bookmarked this page!

It looks terrific, I’d really love a report on how the folding/flip up goes after a few months of operation - will you actually fold it away and bring it out for each project? I know myself too well, which is why I built a small version until I iron the bugs out.

Sorry I can’t answer your question, because I’m about half a week behind you I suspect, but someone will be along shortly!

Folding it up between projects is the plan, but for the next few months All my projects will probably use it since it’s a new toy.

So it’ll probably be out for a while at least. I also don’t have an assembly table, so it does double duty for that. But I’ll definitely try and keep it updated in the future!

Actually building this beast was a task, as I don’t have a flat surface that big. I ended up putting the 3/4" 4’x8’ sheet of MDF I’m going to use a spoil board on my garage floor and shimming it with scraps until it was as flat as I could get it. This worked reasonably well. After cutting all my MDF sheets to size (which took a couple weekends), I started assembly.

I started with laying the skins down and framing the outside to make sure it was square, then worked on the internal webbing, which took a few days of gluing and brad nailing. I used the 4x4 post to position the hinge posts, which are 1/2" off center to let the table hang a little more positively. Probably unnecessary, but doesn’t hurt.

Got the bottom skins on after cutting some holes for the hinge posts. I didn’t cut some of the holes big enough, which resulted in a lot of clamping and hitting with a mallet to try to get the skins in place.

Built the stand and attached to the posts. This used two 1" diameter 12" long tubes, same as my z axis. Getting them through the hinge posts and the stand posts was a chore, as I didn’t get them perfectly lined up. Ended up using a parallel clamp and a lot of elbow grease to slowly force it into place. Luckily, the legs fold smoothly.

The cross members were actually fitted after I had the stand attached, as I didn’t trust that my distances would be exact. This worked out pretty well.

Attached the outer legs with some carriage bolts, drilling a hole and filing a bit to get my wrench in. when these are folded down I can shim them to make sure the top is as flat as possible. I also added retractable casters to the base to allow me to move the table easily.

20210908_1934511908×4032 590 KB
Got the table flipped up! luckily my wife and I were able to manage. The retractable casters work quite nicely, and the whole table is very stable with all of the legs deployed, yet easy to move with the casters up. I can deploy and retract the casters with no difficulty, which was something I worried about.

20210916_2013521908×4032 307 KB
This is where the lowrider2 currently is at. All my parts were printed myself with black carbon fiber polycarbonate or yellow PETG for some of the less structural parts. I also printed an adjustable tension block for the Y axis.

So that’s where I’m currently at. Next I need to assemble my dust boot, attach the router, and do all of the electronics.

This shows more clearly my question, are the end caps on the z rails (I think they’re called the xz parts) supposed to fit flush with the Z rail? I think my rails aren’t quite parallel, but I’m not sure how to actually adjust it to get them parallel and allow those parts to sit flush. Does it matter to much? The whole axis can move up and down quite easily by twisting the lead screw, so it can’t be too out of square, but I’m worried it’ll affect cut accuracy.

Which controller box are you using (yellow box on the Y axis)?

Which controller are you using? Rambo, SKR, …?

I am in the process of designing a box for my LOWRIDER2 and Rambo 1.4 because I had not found anything I was to excited about.

Nice work! @platcham
I think if your whole gantry can rest at the bottom you should be good. The z-bars are parallel enough to pass through the two bearing holders in the y bracket.
If one side of the xy piece doesn’t sit on the y-bracket at rest then some adjustment is needed. I’ve found I needed to square the whole setup by resting the x bars on supports that were of equal height from the spoilboard and loosening/tightening the nuts and bolts on the xz parts until the bars were aligned correctly.
Hope this helps.

Which controller box are you using (yellow box on the Y axis)?

Which controller are you using? Rambo, SKR, …?

I’m using the SKR 1.2 Pro, with this case from thingiverse.

@Darwin Thanks for the advice! I’ll try to square that all up this weekend. I won’t fret as much if the xz parts aren’t all the way tightened then.

Mine isn’t quite that big but it’s heavy. I bought an 800 lb capacity electric winch from Harbor Freight. Some cables and pulleys. I just attached the pulleys to the ceiling joists and I lift the table straight up. High enough to walk under.

Got a good crown in the center of the build area. I also added a dust shoe and printed an adapter to fit my vacuum hose.

Pretty much ready to make some chips! Related, does anyone have advice on how to calculate feeds and speeds? Particularly for surfacing? I have a 1" surfacing bit that I’d like to go over the entire build area with. Right now I have it pretty slow at 480mm/min with 1mm depth of cut. Estlcam predicts that will take over 9 hours to get the board finished though, which feels like a lot. Is that way to slow? Should I just start slow, then use cnc.js to increase the speed if it looks good?

That’s an awfully big bit to turn but you can always try a test run on a scrap piece to start. I’m speculating that you could push the feedrate a little and take a smaller bite for doc. A big factor in the time for this will be the overlap between passes. You have a very large table so anything is going to take quite a while. With a small depth of cut you can move these things along faster than you think.

Also a word of wisdom from experience is to tram the router as best you can before surfacing otherwise you can end up chasing lines between passes. With a 1" bit it will show up if it’s not perpendicular to the spoilboard.

The table and setup looks quite impressive, well done so far and good luck moving forward.