Hi everyone! Long time lurker, finally getting around to building one, got a lot of questions (especially now that Fusion is changing), but my main one is this: Is there anything wrong with using my Dewalt 611 on a Primo, 1" OD SS, trying to get ~24"x24" usable space? I know that router’s going to take up a lot of room, and probably heavier than a 660. If it’s feasible, has anyone made a mount for it? I wasn’t sure, I think there are mounts that have been made for the 611 on previous versions, but I’m not sure yet if those can mount to a Primo. Sorry for the newbieness, I didn’t see anything using the search function. Thanks! Can’t wait to finish these prints and start assembling.

If you already own it, try it out and see if you like it. The biggest issue I see is weight. Here are the spec weights of three spindles:

As for mounting it, I don’t know of a Primo tool mount for the 611. But you can print out a Burly mounting plate and use it on your primo machine. Download a set of files for the Burly and print out “Tool_Mount_C” and two “Nut_Trap_Burly.STL”. With this mounting plate installed, any Burly tool mounts you find on Thingiverse (or elsewhere) will fit your machine. Note the price you pay for this solution is 1) a bit more weight on the Z axis, and 2) the router will sit a bit further out from the Z axis then it would with a Primo-specific mount.

Edit: Did a quick search on Thingiverse and found a “work-in-progress” Primo tool mount for the DWP611: https://www.thingiverse.com/thing:4592523

Wow! How did you find that and I didn’t? I used “Primo 611” no quotes and got nothing. Anyways, thanks! I’ll check both of these solutions out.

I use one and I like it. You missed that it also sticks out a little farther, and that will impact rigidity. Probably much outweighed by the speed control, though, at imo.
So I agree, if you already own one, use it. If not, it’s really tough (nearly impossible?) to beat a 660 with an actual speed control.

That Makita weight includes the router base which is almost a pound. I measured about 3.1 pounds not counting the cable, 3.5 pounds with the cable. The other two values are probably overstated as well.

Been thinking about getting a postage scale, I’ll weigh it if someone else doesn’t beat me to it

I’ve been using a 611 with my Primo and its been great!. no issues so far.!
For a mount I used the one listed above from thingiverse. This thing feel super rigid. 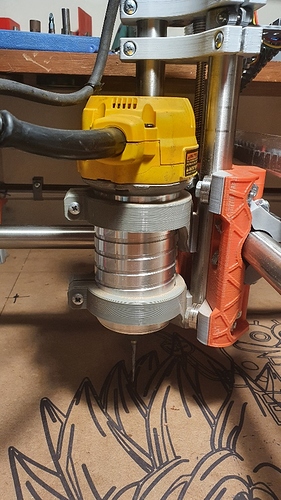 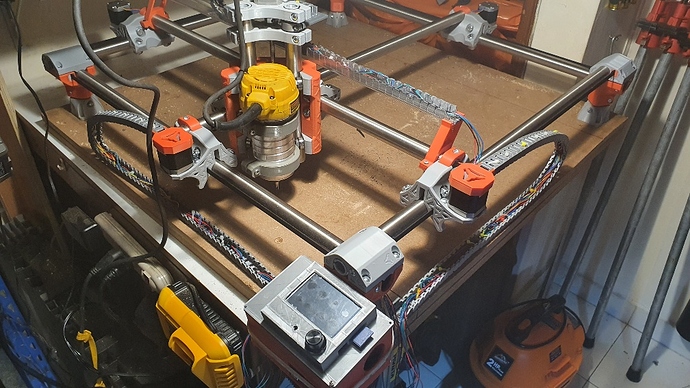 @robertbu looks like 3.5 without the base. 'scuse the mess.
Edit: I just realized that’s lbs and oz, not simply lbs. So basically it’s no cord, and a hair under 3.5lbs? 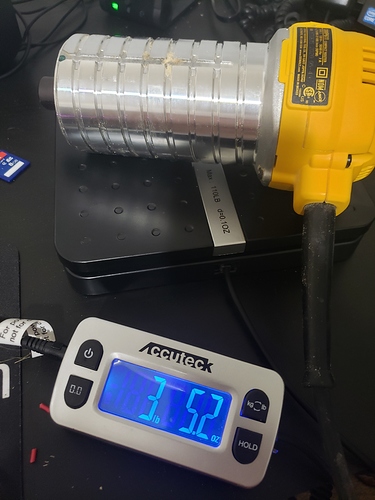 Cool. So we have actual weight without the cord:

So the Dewalt DWP611 is only a couple of ounces more than the Makita.

Yay!!! That mount is my remix of Ryan’s Makita mount. So glad it’s working. My MPCNC build has been paused due to life so I haven’t been able to test it.

That mount is my remix of Ryan’s Makita mount.

Hey Lara, thank you for the mount. I was initually worried it may need some tweaking since you stated in thingiverse that you had not tested it. Well I am happy to report that it works like a charm. The only thing I did was that I used only the lower part of the mount for both top and bottom. I printed both rings and tried them out, felt that by using the lower mount also on top, the router was more stable.
As shown in the picture, the top mount would fit lower on the router so I assumed that by spreading them apart I would have a better grip. 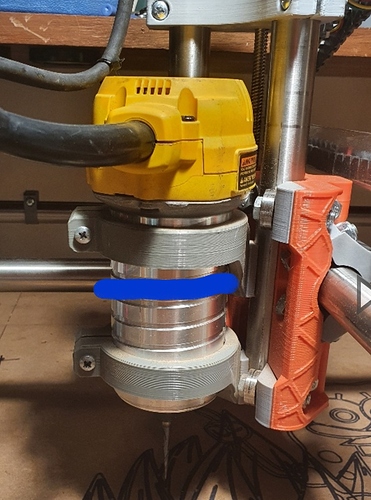 That’s all good to hear. I’m using a burly mount on mine right now, and it’s got some flex. Now that the core is so awesome, I can tell. I tried to make one from the 660 mount, and then from the blank. Hard fail both times.
An espresso machine on sale caught my eye, so I had to push off the 660 speed controller project, lol.

What kinda speeds are you all using on the 611 and/or mpcnc and what are you cutting?

Speeds are a funny thing. I’ve set up jobs that go 100ipm, but Adaptive paths with 10% stepover. I pushed another job 80 ipm full slot, but it was 1/4 mdf and dimensions weren’t important.
I’ve seen in different places how fast people cut aluminum then find out its 0.1mm deep.
This is why you’ll sometimes see people reference the material removal rate (MRR) because at the end of the day, for a given job you need to remove a certain amount of stuff (ok, it’s somewhat variable with the endmill diameter on contour/cutouts).
I’ve been wrong plenty, so I expect someone to contradict me here, but the 611 and 660 have overlapping rpm ranges and the 660 has more than enough power, which means the extra power from the 611 goes unused. So, the performance is still dependent on machine rigidity (which is more dependent on the build than the router, although the mpcnc is more rigid with the 660) with one contributing factor: speed control. Some of us are more comfortable pushing the 611 because it doesn’t bog down. Plenty of people are ok pushing the 660 the same way and adjusting speed on the fly with a router speed controller.
Short answer: I think about the same speeds we get on the 660, lol, with varying impacts on the length of the job.
Please don’t think I’m assuming any particular knowledge level for you, I just like to be thorough because I never know WHO will end up reading this. Plus, when I lay out all out, it’s easier to point out where I’m wrong

Yeah, sorry about all that. I was up late, having a little trouble sleeping, lol.

Plus, when I lay out all out, it’s easier to point out where I’m wrong

To point out where I’m wrong?

No, you’re wrong there… To point out where @jeffeb3 is wrong…