I thought that I kick off my first posted topic with a “Things You’ve made” post.

All projects have been created using my MPCNC. All future projects will be on my newly fabricated LowRider2.

A set of signs for each office for the non-profit my wife works for. This was my first project and sold my wife on the idea of the MPCNC build 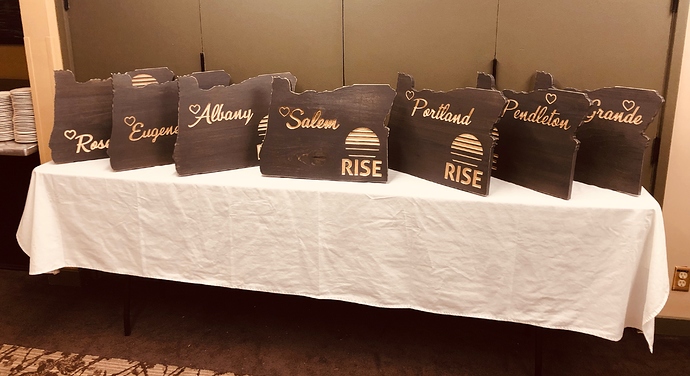 This is a simple “Home” sign for our travel trailer. 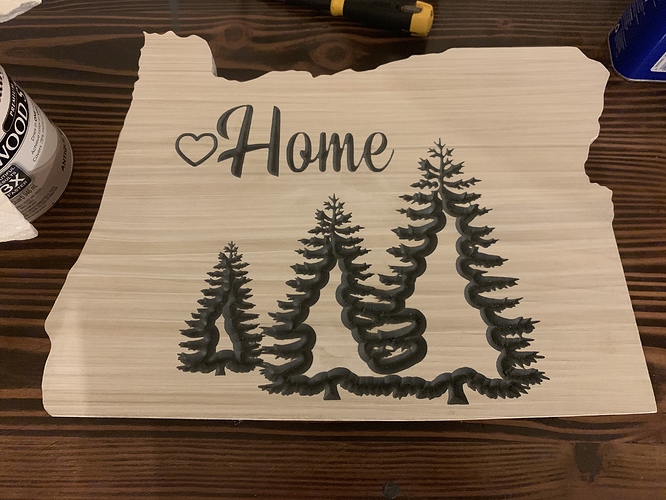 Here are some name sign for various friends and family. 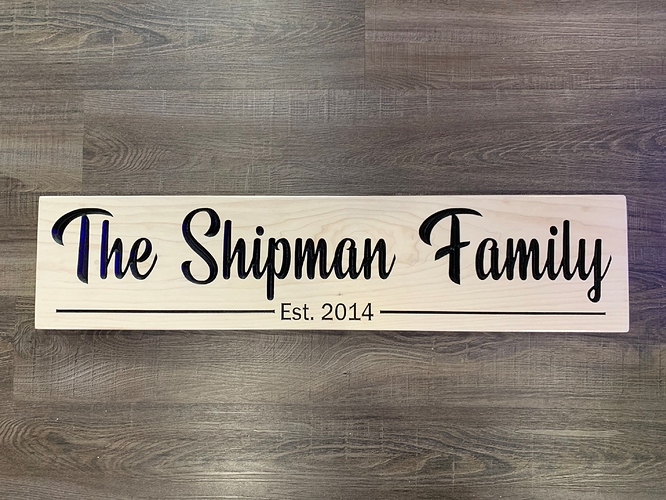 This is a sign for our friends who have nicknamed their kids Grace and truth.

Custom back lit acrylic panel for a crypto mining rig. 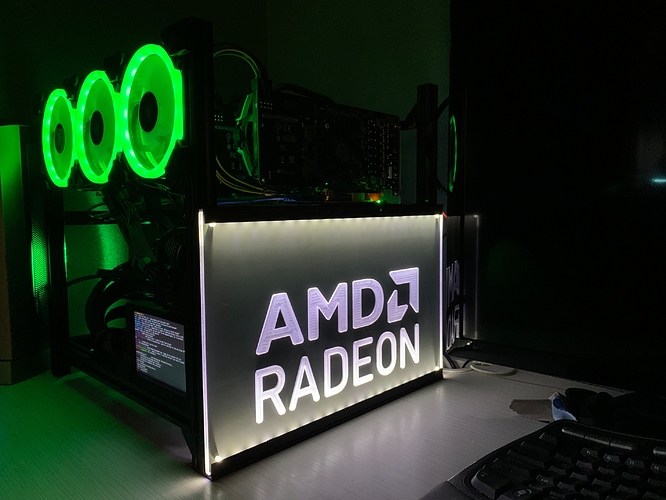 A growth chart for my two daughters

I machined the back to hold 3d printed keyhole hangers. This was a 3 step carve due to the length. I designed it in Fusion 360 and added an index mark that I could line up 0,0 to. 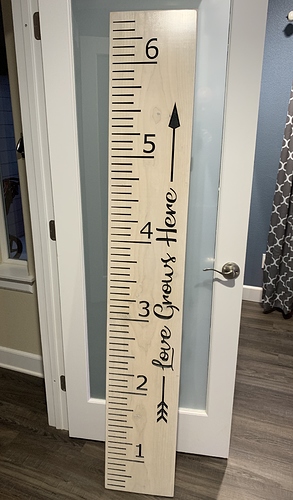 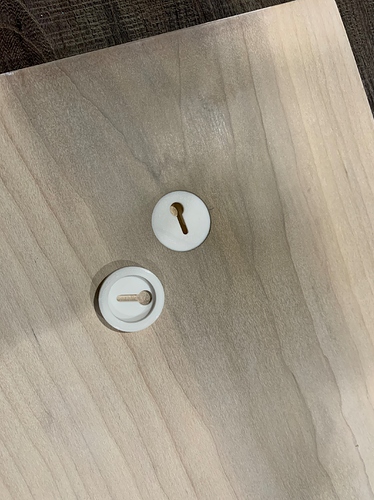 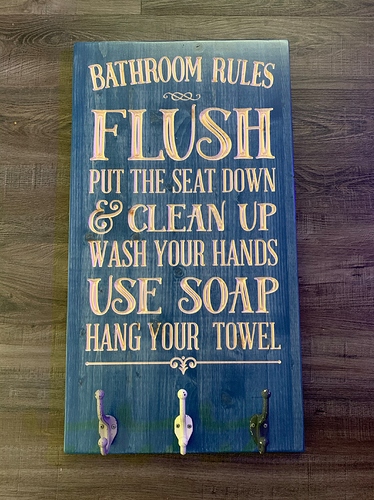 So far my machine has made no money, but a lot of happy people, and a few bottles of scotch!

That is a lot of carving!!! Nice work and very high quality finishes.

Very nice carving and excellent finishing of your projects.

What? No sign for The Dalles? Aren’t we important enough to be involved in her charity?

Seriously, it looks like an interesting organization, though if you are not careful you’ll end up doing a batch of signs for Texas, Utah and Arizona too.

Of course I can google and experiment, but could you post the names of the fonts you used on your signs.

The finish is the only hard part! Software makes the design easy, and your machine design makes the carve easy! I can’t wait to fire up the LR2!

The name sign font is “Beauty Mountains” which is a purchased font or free for personal use. The grace and truth sign, as well as the bathroom sign were purchased SVG files from Etsy so the font type is unknown. The growth chart font is on my laptop at home so I will have to get back to you on that one.

Seriously, super thanks! Why?

Man am I clueless. I had NO idea that you can buy SVG’s on Etsy!

I thought I was going to have to re-create from scratch. Meaning, if I saw something a family member wanted that was kinda common, I would be searching for fonts, or tracing bitmaps, etc.

Game changer for me. I guess I should stop living under a rock.

I didn’t know either until I started google searching all the things my wife wanted to buy that I told her I could make. The svg’s from etsy usually are multi-format, as in they come as .svg, .dxf, .png etc. They are also what I condsider in-expensive. Then I use inkscape to manipulate to whatever we are going for.

I really should get in the business of selling SVGs. I’m amazed that in the laser Facebook group I slum in from time to time folks will pay good money for a circle. I usually give them away for free.

There was an artist that thought all the facebook games were nonsense, and a waste of money. So he made a game where a cow would show up each day, and you could click on it for points.

If you wanted more points, he released new cows every once in a while that you could buy, so you could get more clicks and more points.

He thought this was an obviously stupid game, and it would be obvious to anyone who played it. The most rediculous cow was just the original cow, mirrored, and it was like $20.

But it backfired. He got a ton of people playing it. He made a ton of money, and people played it all the time. He felt so guilty about it, he shut it down, and donated at least a bunch of the money to charity.

I am not at all saying that buying svgs from etc is as stupid as clicking a cow. I am jist saying, be careful ironically selling circles. You might just end up successful, with more irony than you can handle.

What are you using to create SVG’s? I find that inkscape is cumbersome for anything aside from text or manipulating existing designs. I come from an autocad / Revit background and have since learned Fusion 360 for 3d print design so that may be skewing my view.

I read your post while watching an episode of Duck Dynasty. I almosted blew scotch out of my nose due to the random nature of the circumstances…

Here is my MPCNC, and the table for the LR2. 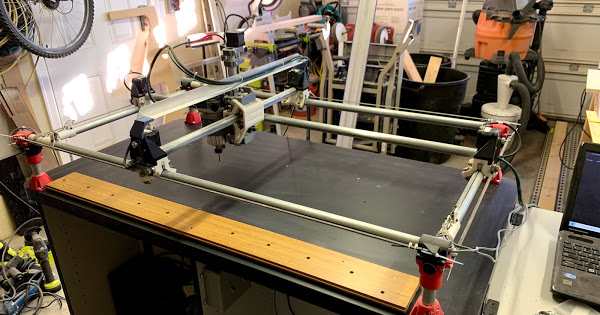 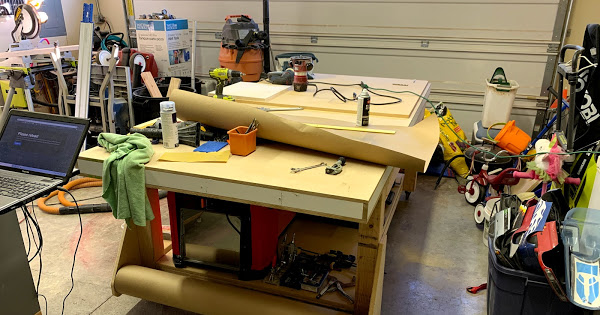 What are you using to create SVG’s?

I do most of it in Inkscape, but I also use Onshape and Kiri:Moto to get SVGs.

I did a lot of graphic design stuff for newsletters and yearbooks, so I was used to 2D vector stuff. It’s all the color and gradient stuff that makes a difference there. the extensions are good and so many features make it pretty powerful. I have a laser so the 3D stuff isn’t quite as necessary. And the laser needs colored vectors, both lines and fills for settings.

Inkscape is free. I didn’t encounter free 3D design stuff until Sketchup. I like Onshape but I expect one day to switch to Fusion to access the CAM. 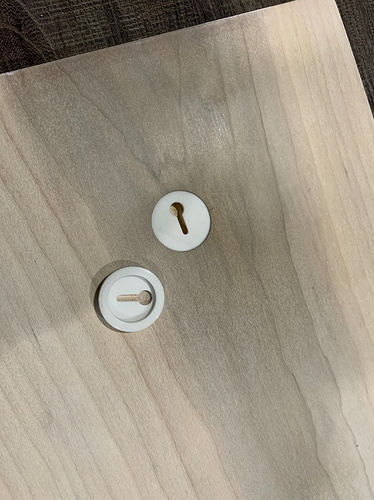 All of my carving has been done with a 90 degree v bit. This was due to the fact that they are readily available at the big box stores and I had one on the shelf in the garage.

I didn’t have a bit to do a keyhole pocket but I do have a 3d printer and the ability to design it. At first I designed it for a forstner bit but had this keen idea that it would be more precise to use my cnc to machine it to the correct depth. The insert is glued into the pocket.

The consequence of a sharp bit is that it needs to cut so much deeper to cut wider, so if you are making very wide letters, you need to cut deeper (which could mean more passes, or more load) or have to pocket out the middle (which can leave a bad finish, or take forever to pocket with a tiny bit).

I really like the 45 degree bit Ryan sells, but I pay attention to only do small things with it. Larger text, I would do with a flat bit. I am not selling anything though, so I am ok with the imperfections.