So ive wanted to do some kind of edge lit acrylic sign for a while. I love the light up stuff and I wanted to try to make it all myself (engrave/enclosure). The other goal was to hide the wires/control boxes as much as possible and maybe even run a battery pack but this attempt was made with a powered 12 volt led strip.

I bought a diamond drag bit off ebay a 90 Deg 1/4 spring loaded. This was my 1st attempt with some really really thin material off amazon that ended being PETG not even acrylic. It was so thin it was flexing while I was engraving it. I carved this with vectors flipped on the back as I read if you do it this way it looks better. I had a cheapo remote controlled led strip that had a smaller inline controller/driver from amazon. Did my best to pocket it and stuff everything in the frame. The wood was edge glued nothing fancy but big/flat. The results were not totally horrible. 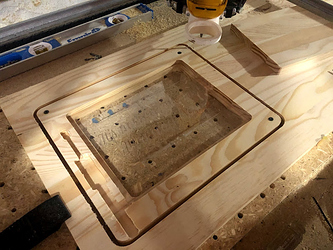 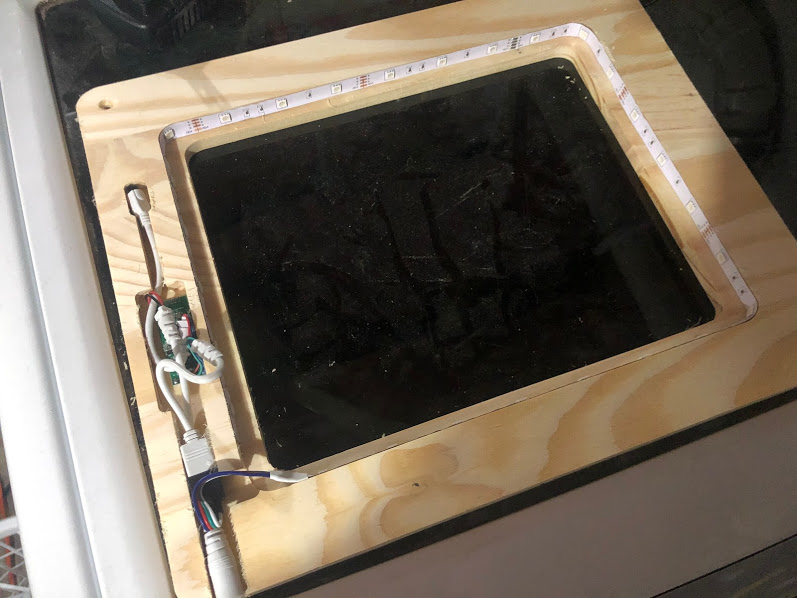 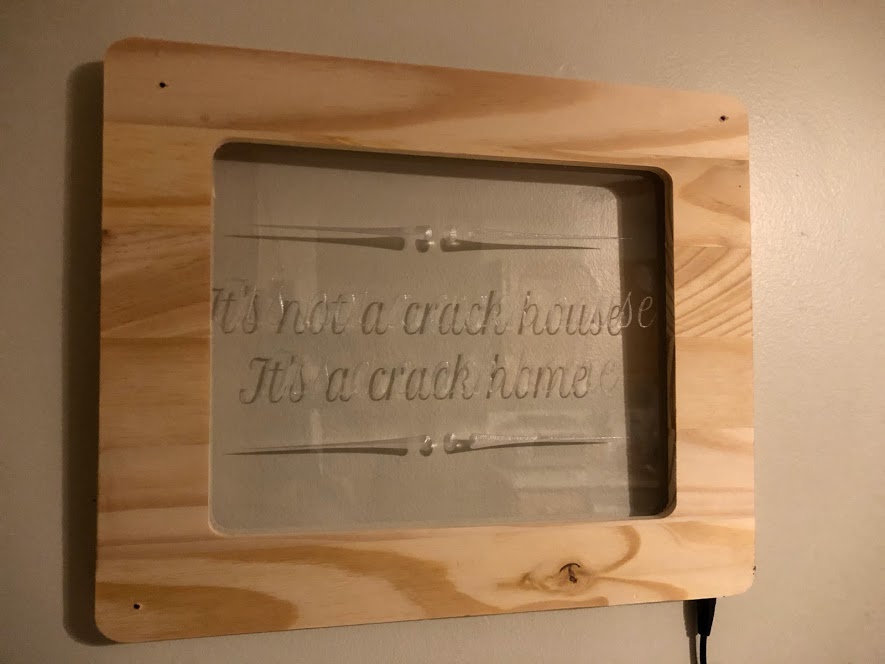 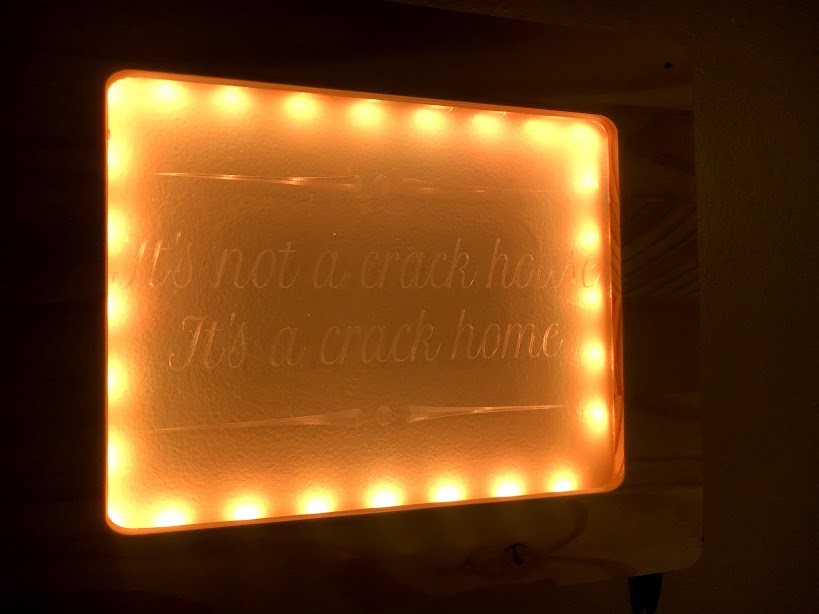 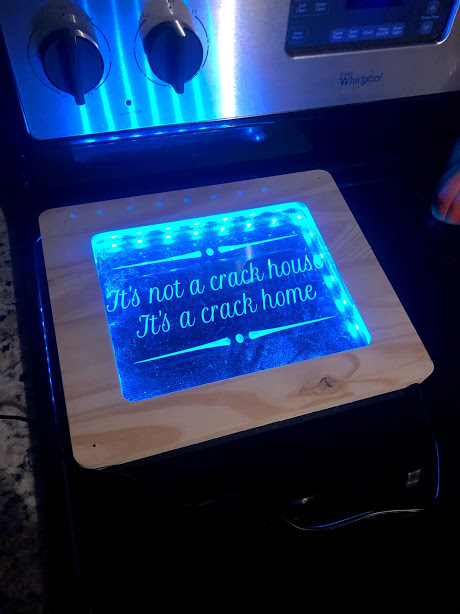 Just for the hell of it I tried spray painting the back of the thin acrylic black in hopes the engraved image would be more obvious but it backfired. Maybe it was because the image was engraved on the back or that it was too thin. But that ended up in a failure and ruined the whole thin petg anyways…

I grabbed some new 1/8 thick acrylic from Home Depot as I didnt want to wait to have something shipped, I believe this was a mistake as its always Extruded from the big box stores. I tried re using the same frame and just rattle canned it black because idk I felt like it lol. I went with a simple silhouette from a certain movie about Stepbrothers. This time I used my black wasted PETG piece as a background and it seemed to help. Its was still wicked bridge so I cut all but one LED strip on the bottom and then it was a bit too dark (My 2nd mistake not using some kind of diffuser instead). 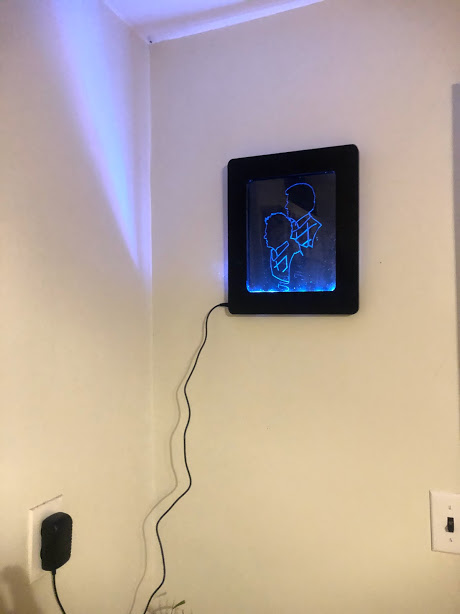 Its not bad but a few things:

I can’t tell if you are already doing this but you should use spacers to align the edge of the acrylic as perfectly as you can with the LEDs. The effect depends on total internal reflection and this requires that the light enters on the edge, not from the front or back near the edge.

So I tried to make something on my 3d printer kinda like a channel that would serve that purpose. I think the glass was simply way too thin and also I needed to go thinner on the 3d printed part for light to shine through or cut down the infill to 0. Im not giving up on that idea just need more free time. 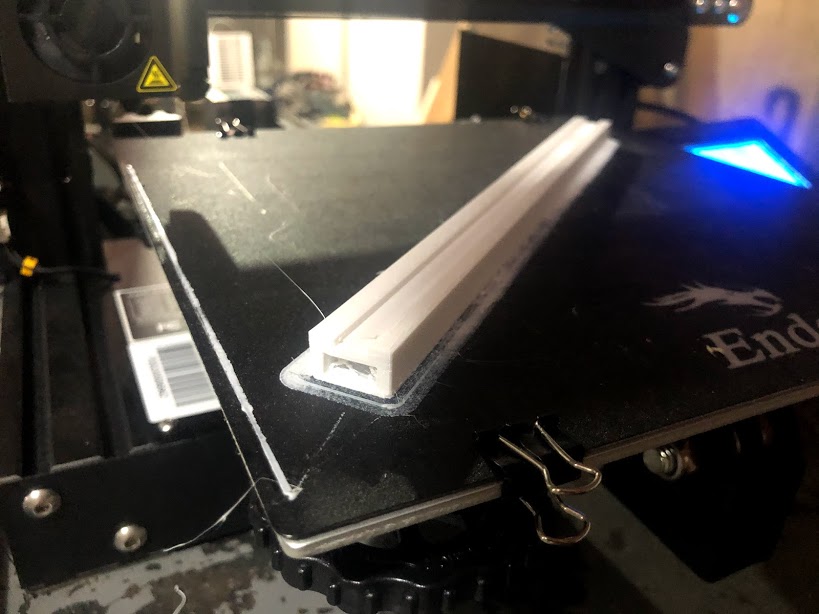 For hiding the wires, I make lithopane boxes that run off of a 9V battery for months. They use small sections of the rolls of single color LEDS with a switch to turn them off when not used.

Do you happen to have a link for what LEDs/controller/setup you have been using? I would love to run something that small. I wonder if the single colored LEDs draw way less than the multi colored ones

You don’t need a controller for the single color led’s unless you wanted them to flash or maybe fade in & out. The ones I have are all rated for 12 volts but work fine on 9V. I just bought a bunch of 9v battery leads and add a switch on the positive. Then solder to the LED strips. For the size of my panes I’m using one group of 3 leds on 3 or 4 sides of the inside of the box.

These are the materials I ordered. I also have the led’s in 3 colors.

Thanks for that I was wondering if the 9 Volts would hang with a short length of leds. Im gonna experiment with them as they take up way less space than a stack of AA’s.

Thanks for that I was wondering if the 9 Volts would hang with a short length of leds.

I have a string of ~25 LEDS meant for holiday decorating that do quite well with 3 AAs in series. They have a control box with multiple flashing/fading/steady on functions and will go about 7 days for 6 hours a day on a single battery charge.

EDIT: We’re coming into the time of year you can find things like this at WallyWorld to play with.

A new battery would last longer, but I usually use the old 9v from out the smoke detectors for home use. These LED’s don’t take much power in the small strings I use.

A 3d printed diffuser from white pla would really help. Also an led strip dimmer too. Although if you want the engraving only to pop, your acrylic needs to be as thick as the led strip.

Although if you want the engraving only to pop, your acrylic needs to be as thick as the led strip.

That right there is key advice. I gotta source some wayyyy thicker stuff.

I made couple very large edge lit signs all with 3/4" acrylic, For the CVS sign I used a Double row LED 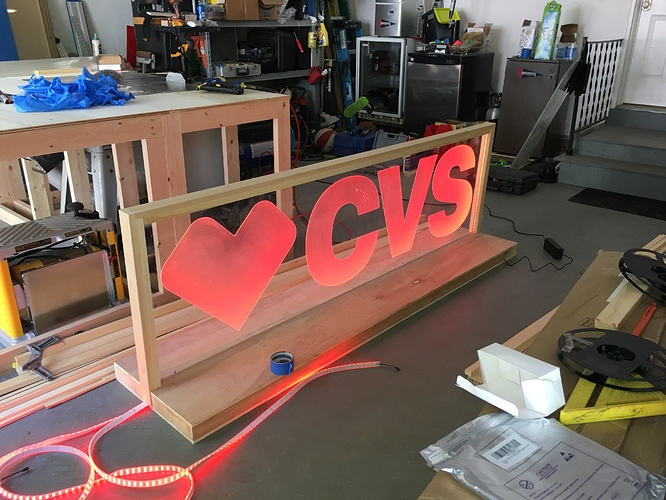 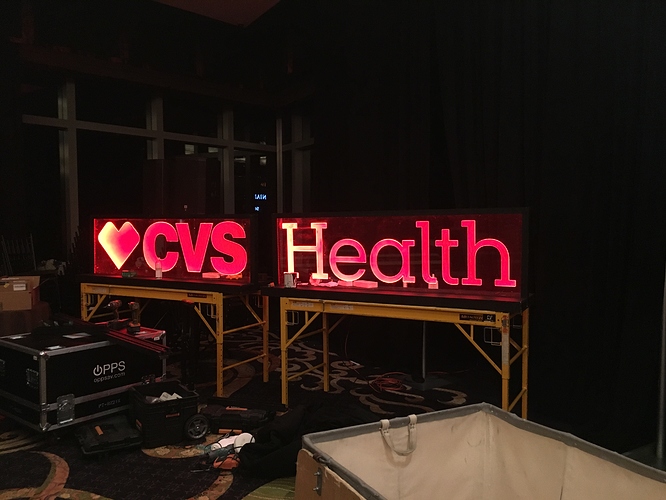 The DBDC sign was a single LED rope like the one listed above, The difference between the 2 signs is that I mill the acrylic down to 1/4" and glue the led strip inside of the letters 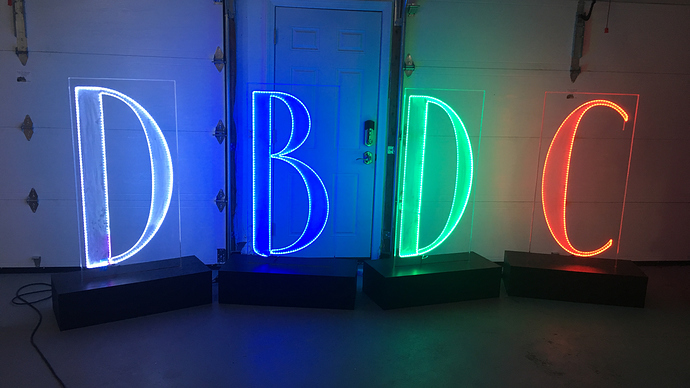 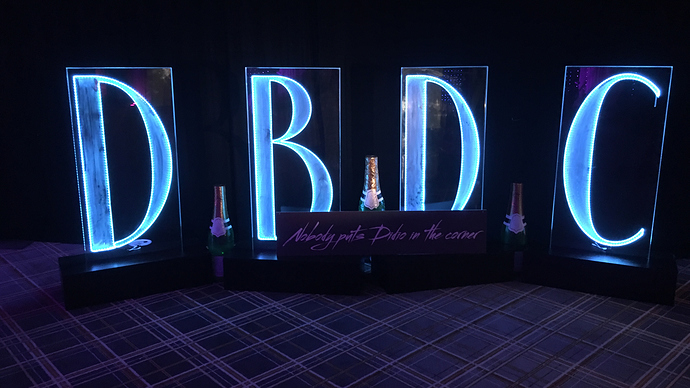 You have some pretty creative awesome ideas there. To do those larger signs what bits did you use? Looks great and they are huge lol!

For the 3/4 is that cast im guessing? How much does it run you for something that big? Sucks cause I want to practice but im learning quickly theres little room for error with plexi.

Hey Joe,
Yes all cast acrylic, each sheet ( 5’x10’) from my local sign supply is not cheap …$975 each before taxes.
For both signs I used Bosh85611 for the rough pass and Amana 51404-K for the finishing pass
The CVS Health sign, each section is 6.5 ft wide by 2 ft tall and the DBDC is 2 ft wide by 4.5 ft tall plus the base.
To get that Frosty look and make the light pop I used Frosted Glass Spray Paint from the big orange store.
I also made some small sign out of 1/4" acrylic for my brother, but I can’t find the pictures…
If you wanna practice I would look at a surplus store near you. You can find some cheap 1/4" and 1/2" acrylic there.

Yeah you really need a diffuser to get rid of the point sources of the LED strips, otherwise good job!