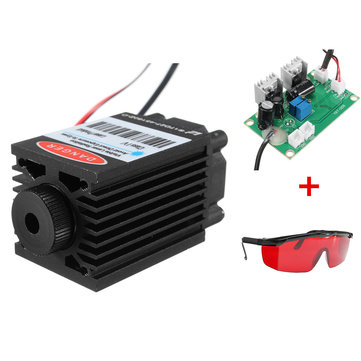 So I snatched one up.

I followed the instructions for the 2.8watt laser and they apply to this as far as Marlin and hooking up to the RAMPS. The pots were apparently pre-adjusted because they were glued. Figured I’d give it a try as is. Works just fine. Fan speeds control the power of the laser. Laser starts to fire at fan speed 3 and full power at 255 as you’d expect.

Just wanted to share if anyone wanted to try out a $65 laser… Came with everything including the glasses.

The transistors did get a bit toasty on the driver board but the laser module itself seemed to barely get warm. I will come up with something to work on those heat sinks. Also need to come up with a mounting solution for the CNC or find a workable one on Thingiverse. 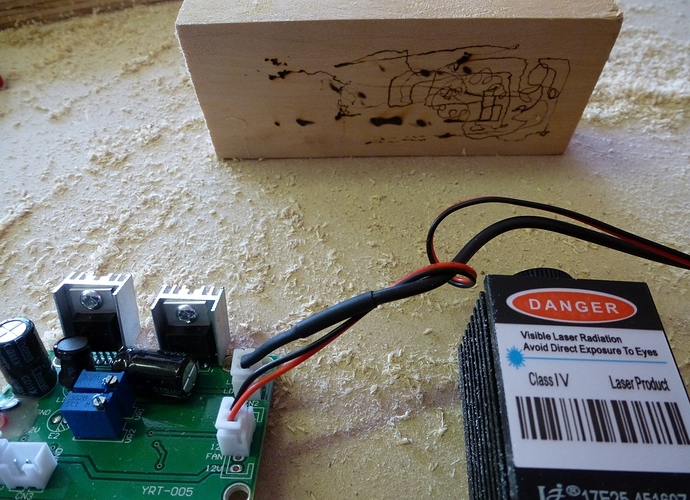 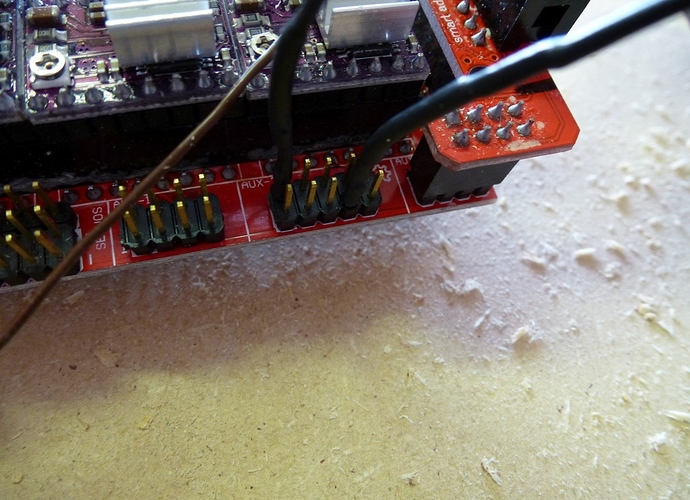 Alright purchased. I’ll let you know if I like it in a few weeks.

Kit is in the mail, started printing parts today, so of course I bought one too. I mean it’s a freakin’ laser!

Will someone please design a mount for it that’s in the shape of a shark’s head!?!?!?!?

GremlinRC, over on my FliteTest needle-cutter thread, shared his design for a shroud to enclose a similar 3.5 watt laser head from Banggood. I think it’s a little larger than the one you are looking at, and it’s not a shark, but it may give you ideas… 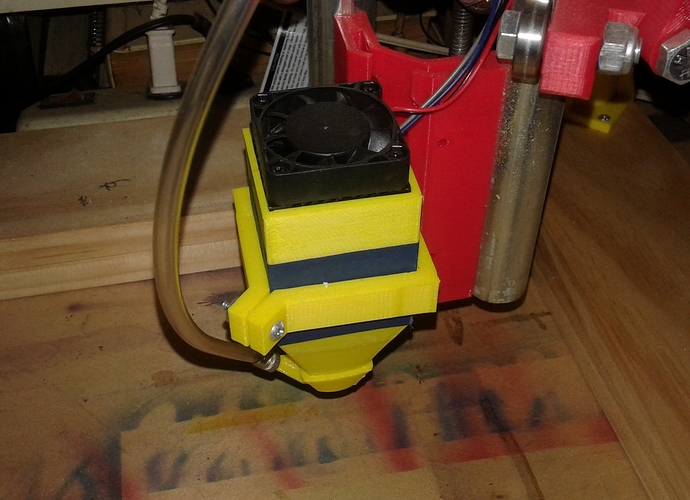 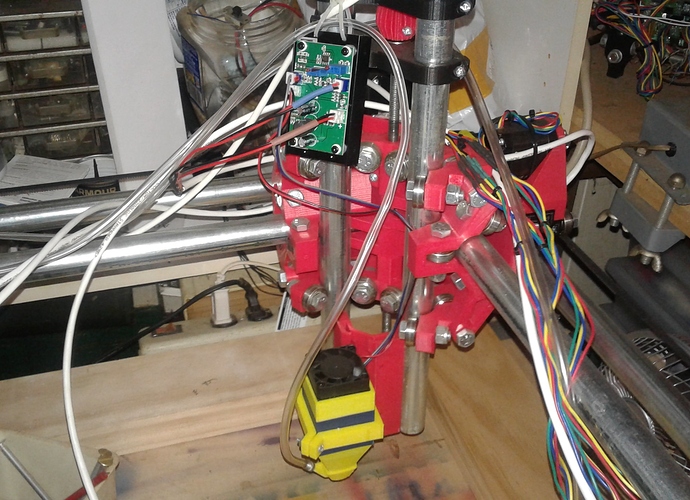 GremlinRC, over on my FliteTest needle-cutter thread, shared his design for a shroud to enclose a similar 3.5 watt laser head from Banggood. I think it’s a little larger than the one you are looking at, and it’s not a shark, but it may give you ideas…

I kind-of glossed through a most of that thread, a lot of great information there, will go back and read the whole think when I have a chance, but I have a question. I think I saw you post that you felt the 3.5W banggood wasn’t any better than the Leo69 2.8W laser that you already had? Was I correct in that conclusion? Did you ever tweak on it to get a better output? Thanks!

In setting up my 2.8 watt DTR laser, I followed Leo69’s fantastic instructions… and since I was using “components” purchased separately, that was a necessity (for me) to get a functional system. The 3.5 watt Banggood laser, however, came as a “system” (laser and driver) and required no setup at all… I just plugged it in and it worked.

That said, there are a couple of pots on the Banggood driver that I’m sure are for setting the laser voltage and current… and though I’ve threatened to, I’ve not messed with them at all. They’ve been “pookied” in place (the adjustment screws spotted “at the factory” with a glob of something to keep it from inadvertently moving) so I just assumed (I know, I know…) someone, somewhere was probably measuring the voltage and current levels at the time they “pookied” it.

Honestly – had I not already had the 2.8 watt laser to compare it with – I’d have never “suspicioned” that I was getting less than the advertised power from the Banggood laser. So, while not any more powerful AFAICT… I can’t tell that it’s any less powerful either. I figure that just means that the laser is running at more conservative voltage and current levels and should hopefully last longer. And it does pretty much what I need it to… so I can live with that for now. If I ever get to feeling “froggy” and just have to have more power… the pots are still there to start messing with. =8^)

We need some kind of power measurement, like time to boil a thimble of water or something.

Nothing rigorous, I based my power observations on the testing I was doing at the time… i.e. cutting 4.75mm plywood with, and without, air-assist. With the 2.8 watt laser, I was cutting completely through the plywood in 5 passes at 100 mm/min feed, full-power, focus at top of the material, and no air-assist. With “strong” air-assist from my 3-gallon compressor – and lots of noise – I could cut fairly well in 4 passes.

Then my 3.5 watt Banggood laser arrived in the mail. I set it up in the same machine and conditions… and saw virtually the same performance as I had with the 2.8 watt laser. So, where I had hoped to cut in 3-4 passes with the new laser, it took the same 4-5 passes I saw with the smaller… and I judged the two lasers roughly equivalent in power.

Lasers are pretty tricky. I have been learning a ton from https://www.youtube.com/user/SarbarMultimedia on youtube.

He even made his own laser strength tester. Smart dude, love the way he approaches problems.

He even made his own laser strength tester. Smart dude, love the way he approaches problems.

Saw the following description of testing laser power from reddit. Original link at the end of this post.

Measure 1g of water, which is a volume of quite exactly 1cm³. Mix the charcoal powder into the water so that you get a nicely opaque density, but it should not absorb all the light right at the surface. Put the thermometer into the water. Then shine the laser into the water (mind the specular reflection). About 4% of the power will be reflected off the surface, the rest gets absorbed by the charcoal, which heats up and dissipates the heat to the water. Measure the time it takes to heat up the water by 10K (=10°C). The heat capacity of water is about 4.2J/(g·K), so to heat up 1g of water by 10K it takes 42J. So if it took your laser t seconds to heat up that beam dump by 10K the power is 42J/t. Now remember that about 4% get reflected and don’t contribute to the heat, so 42J/t = P · 0.96 thus P = 42J/(0.96·t)

Assuming a 1W output power of your laser, if we put the numbers in:

So it would take a 1W laser about 45 seconds to heat up blackened water by 10K.

Math works out about the same. Wonder if the charcoal really makes any difference…

r/lasers - How to measure the wattage of a laser?

Had to go ahead and jump in on ordering one of the 2.5W models, FYI coupon code “laser” gets you 8% off.

Also, coupon code “weaponized laser” gets you on the no fly list.

Came with everything including the glasses.

Any idea what the OD rating is on those included glasses?

Came with everything including the glasses.
<span class="et_quote_sign"></span>
Any idea what the OD rating is on those included glasses?

No clue. I know when you have them on it filters out this beam entirely and you can barely see the point of the laser on the target and I suspect that is only because its burning and you are seeing more fire than laser.

If the temperature can relax for a little bit I can get in the garage and play with this some more. Its been 102 - 107 out there…

I think I only paid $51 when I got it. I was looking at 3D printer stuff and it popped up as a banner and had some kind of deal going on so I snatched it up. I’d still pay $65 for it. When the beam is focused its pinhead tiny. Dunno how that compares to other lasers. The only other ones Ive ever messed with were laser pointers and the ones attached to my rifles or pistols and this focus point is way way smaller.

Just saw this topic, and took a look the laser, wondering how simple it would be to set up with the mpcnc (mini Rambo version). Would this be easier to set up than the $100 laser that most of us are using?

Hey guys, I have a MPCNC and have benefited greatly from dkj4linux’s posts on the flitetest forums concerning the needle cutter (thank you!). My brother and I have built a needle cutter and vacuum table of our own and used it extensively. I have done a bit of v-carving with a dewault router on the machine. I now have a 3.5w laser & driver combo on the way from banggood: 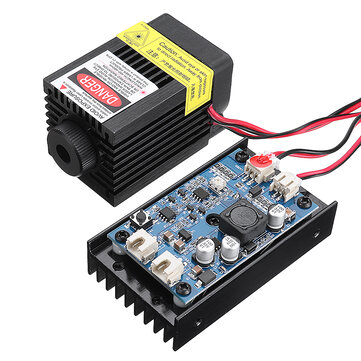 I’m hoping to use the same driver mod to control the laser through the board that runs my mpcnc (purchased here from vicious).

I’m looking for any ideas concerning eye protection. I don’t want to build an enclosure for my mpcnc (it’s huge). I would like to avoid having to wear goggles the entire time the laser is running, but I obviously would if it is unsafe not to. What are the “must-haves” for eye protection with a laser setup like this? Does anyone have a more compact and convenient solution?