Bed too hot or cold or something else??

The printer is working great, but I’m not. Lol. Whenever I try to print something with a large flat surface, the first layer looks like this:

Notice the strange “waves” about every 5 lines or so? Looks like ripples in the sand with the one edge pulling up. This leads to the next pass over it, actually having the extruder tip catching and moving the part. I’m guessing it’s a bed heat issue but I’m at a loss. With flat sections smaller then about 5mm wide (without the section contacting another extruded layer) this doesn’t happen. It only is happening during “long” runs like in the pic. I’m running my bed at 65c for the first layer. Gonna try another print at 70 and see what happens. Any advice?

Back in the day, we used to call failed CD/DVD burns “coasters”, what do we call failed prints? Lol. 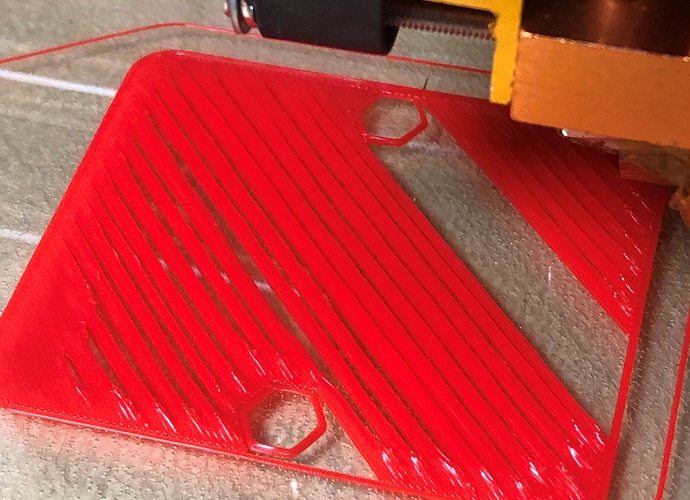 It is either too close or too far from the bed.

From what I can see it might be a smidge too far, turn the Z stop screw in 1/4 turn and try again. if it gets worse, wrong way.

Holy Fast Answer Batman!! Thanks Ryan. I’ve actually been leaving my Z end stop screw alone and been messing with the Z Offset in slic3r. I figure once I get everything dialed in and reliably printing then I will work on adjusting the stop screw. Probably an ass-backwards way of doing it though…

Back in the day, we used to call failed CD/DVD burns “coasters”, what do we call failed prints? Lol.

Then we are eating good tonight! Lol. I’m making lots of it!!

BTW - how long should it take to print out the miniRambo Case? Not the top piece, just the Gnarly_Plain_MR? It took me over 5 hours to print; that seems kinda long. I wonder if I should speed up my printing or is that normal?

5 hours for the body sounds about right. My slic3r calculates 4:10 for 30mm/second for the perimeters and 0.2mm per layer.

Thanks BT. Being so new to this I wasn’t sure if I was doing something wrong or had some settings in slic3r wrong or something. Having someone else corroborate what I was seeing definitely helps!

I’m never trying to print as fast as I can. I don’t run my printers 24/7 and I usually am not ready to use the parts when they come off anyway. If it takes 30mins or 5 hours, it’s basically the same to me.

However, if you want to go faster, layer height and nozzle diameter are really effective. You can push the limits on nozzle speed too, but if your print fails or is unusable and it took 8 hours, you just lost 8 hours, which is tough to make up.

As other parts of the printer get more and more precise, and you start to understand which parts are easy and which are hard, then you can start going through and changing the speeds and looking for speed related issues. The problems with speed are:

Thanks for the info Jeff. I’m not looking for more speed - quality is more my goal, I just wanted to make sure I wasn’t missing something or doing something wrong…