Is there a good way to fix the wider first layer? I’ve had it with each way I’ve tried to level the bed, get adhesion, every print has it, really. Some are worse that others. I wonder if maybe there’s a slicer setting that I can use to adjust it? Maybe reduce the first layer’s flow by a few %? I have always printed with a heated bed, so I guess it’s possible that is making it worse.

I usually just trim it off with a knife, but with my MP3DP, I’m getting more into finer tuning.

Iv’e customized an extruder and just added a ring fan around the hotend but discovered that the extra weight has a tendency to rotate the mount about the y axis. This in turn affects the nominal Z height of the hotend and there is some variability there. The height can vary by about 0.5mm which affects bed adhesion. I added a screw to tighten the mount to the carriage but there is still a fair amount of play. Are you seeing Z height variation when you print? 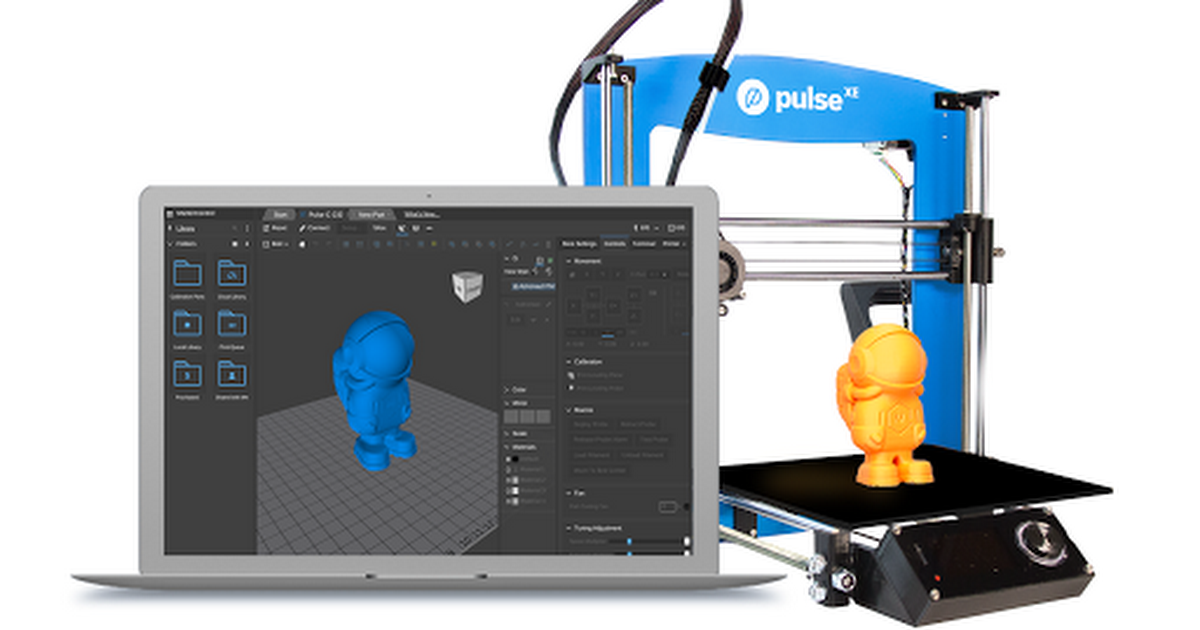 MatterControl is a free, open-source, all-in-one software package that lets you design, slice, organize, and manage your 3D prints. With MatterControl, you can design your parts from scratch using the Design Tools, or visit the Design Apps to browse...

I’m using MatterControl and I haven’t looked for this feature on other software. When it starts doing rings, I make 0.1mm adjustments until I like the way the squish looks. After several prints, I can just set the Z Offset to the value that looks the best.

It just means your first layer is too close. Back the screw off a tiny bit. No software fixes required.

Hmmm. Just an initial height problem, huh? I get better adhesion with the Z height a little lower, but I guess that’s at a cost of the bell bottoms. I tried moving it up 0.1mm and it’s working fine for the Low Rider parts I’m making. They don’t have much trouble sticking at any rate. Thanks for the help.

My print bed rises a little in the middle, about 0.3mm, so for the piece of paper I use to level it, I added 0.25mm as an initial offset in slic3r. I could have used the adjustment screw, but then I would have the offset again next time I changed the corner set screws.

I have an inductive sensor, and I just got the mount figured out, so as soon as I get it exactly where I want it, I’m going to screw everything up again and adjust it with the inductive sensor. I can tell just from moving it around that it’s pretty consistent left to right, there’s just a bulge in the middle, like I said about 0.3mm. But I’m mixing the topics now, you are all right, this can be solved with an adjustment to the z height for the first layer.

I found this in the Configuration_adv.h:

It puts a babystep z in your LCD “tune” menu, which is pretty useful for adjusting it. I tried it, and it defaults to 0.001 steps, which is more than a little annoying. So you might try to increase the multiplier to 10, or 25 maybe, but I used it to adjust the final height after installing the auto level sensor (I hope to post something about that soon).

You should just sped the time to calibrate your first layer. You do not want to start, pause , and adjust every print. Spend the time to do it right once then you will almost never have to touch it again.

I think you will find the mechanical way is much easier than the “auto level” with sensors. The best prints are done with auto level off. Auto level drives your z axis continuously, with a non-autolevel printer it just moves up one time for each layer, The less axis moving at the same time the more precise your parts will be.

That’s an interesting perspective. You do a lot of printing, so I’m sure you’re right. There are two reasons why I went with the autoleveling instead of not:

I don’t personally want to adjust the endstop screw to do fine adjustments, although I can see why you would. I have always used the paper test, at a place near each scew to level the bed. Now, I’m also doing some adjustment to the overall height, but I’m doing it with the babystepping, and the slicer, because if I ever need to relevel the bed, if I had adjusted the endstop screw, then the paper test would undo my fine tuning. If I adjust it with the babystepping, I can get a number, and put that in my slicer settings, and that tuning will still be there, based off of the height from the paper leveling. If I had multiple printers, and they were all printing 100 parts in between leveling, then it would make a lot more sense to use the endstop screw, but I have 1 printer now, and move it, add something to it, remove something from it, frequently, so I’ve been doing lots of leveling.

Also, the babystepping doesn’t pause the print, it will keep running. Barry mentioned it, so I thought people would want to know that it’s possible to add it to the menu, you don’t have to use matterhorn :).

2)This part I understand, Completely understandable.

There are different ways to do the leveling in the marlin firmware. If you just do the 3 point method, then no, it won’t fix it, but I’m doing the bilinear grid, which samples 9 points, and fits 4 planes to the surface, so it should actually account for some bowing. If I had an s curve in the bed, I could have it sample at 25 points, or something, and get a ton of little interconnected planes and compensate. If it was that bad, I’d probably just get a new bed though :).

If you used bilinear you are saying it would print a part warped to match your bed? That kinda sucks? I have not looked at the equations for that but if that is true that would kinda suck for accuracy sakes.

Ah, you are just too picky…

My carpenter friend just made fun of a shelf I built. Every component has a 1/2" gap around it exactly. I thought it was a bit excessive and he felt the exact opposite, hahah, I’m used to dealing with much much smaller tolerances. It’s hard to let go of the quest for accuracy…

Well, if the bed is warped, there’s nothing you can do to print it straight, unless you printed a raft, or something, but I have other problems with rafts. But really, we are talking about 0.3mm over the span of 200mm. I don’t mind that it’s off a little, I just want a good first layer.

There’s also an option, which I didn’t read the details about, that would squish the first few layers to get them even with the bed, but by the end, the layers would be “flat”. I’m not sure how that would work. By the time it flattens out, I would hope it’s just moving along the normal of the plane, and not printing parallelograms.

How much wider is the first layer? Can you upload a pic?

I have a printrbot play with the heated bed, I print PLA on kapton with purple glue (not really needed), when the heated bed temp is raised enough, the PLA will ‘relax’ and widen on the bottom layers and add a burr like sharp edge to the print. I’ve never measured it but it is <1mm per edge. I checked the actual temp vs my set temp with an infrared thermometer and the temp varies more than I thought it would across an aluminum bed. It runs about 65-67C near the edges (where the thermistor is) and up to 80C near the center. It doesn’t happen all the time but when I do get a sharp edge a deburring tool is handy.

The printer runs an autoleveling procedure and you adjust the Z offset to adjust the print height. Too high and your layer will be kind of stringy (round lines instead of flat) and has poor adhesion. Too low and the first layer will either bubble up or be an uneven height (rough looking) due to the plastic not having room to lay flat when it comes out of the nozzle so it pushes out and up onto the other lines in the same layer. If you haven’t seen it, watch this https://www.youtube.com/watch?v=jpmgI4OGldw for a good example on setting print height.

What did you use to measure the flatness of your bed?

Also, check that your sensor isn’t slipping. The holder that came on my printer was junk. I printed a new one and have been getting consistent reliable prints ever since.

I don’t have a pic, but They guys here were right, the bell bottoms were from being too close on the first layer. It really helps adhesion to have it smashed, but there is a sweet spot with no bell bottoms, and good adhesion. I have blue tape on aluminum now.

Adjusting the sensor height is the only difficult part now that I have autolevel. I need to stop changing the nozzle around so much, because I have to take the sensor off to get at any of the parts, which means redoing that leveling, which includes test prints.

I came up with the 0.3mm number by adjusting the z height with a piece of paper at each corner, and then using pronterface to adjust the z height in the middle of the bed, and it was touching the paper at 0.3mm high, meaning it’s 0.3mm higher in the middle. Doing it at some other places, I can tell that most of the bow is from front to back, and not as much left to right.

But since I added the sensor, I don’t really care, 0.3mm over that distance is no big deal.

In reference to auto level…I installed the inductive sensor on mine and never looked back. My printer (Prusa i3) would vary the first layer day to day. I assume due to temperature and humidity.

I still check / set my first layer often even with auto level so the z axis is not having to move hardly at all.