Building an MPCNC and a lowrider 2 in Sydney Australia

I have been building MPCNC’s for years now (first one was 3 years ago)
Finally got around to upgrading it to a Primo so i figured i should get around to documenting my adventures here in case it helps anyone out.

By the way, Ryan’s documentation is fantastic, it saves you hours.

First in order of my machines designed by Ryan . 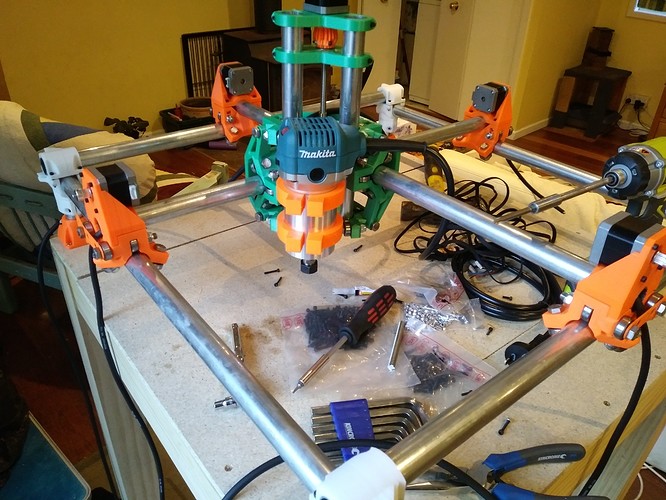 This machine did not get much use due to time constraints, and it lacked some of the things i wanted
For one thing, the home built controller was awful.
(exhibit A) 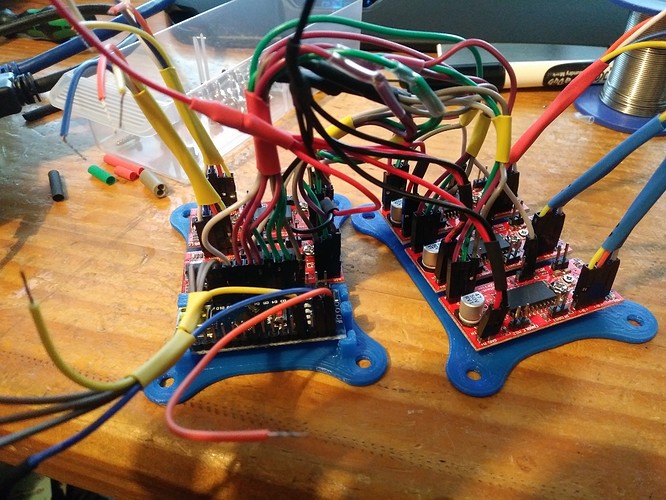 So I decided after I moved house to just rebuild it with a decent controller, self squaring end stops, and GRBL (cause I like it, nothing against ramps, i just like GRBL)

So this is the new machine (nice new primo) doing its bed leveling pass. 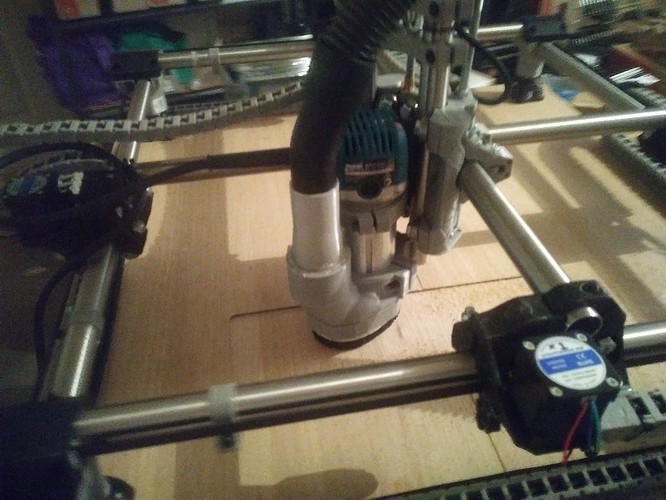 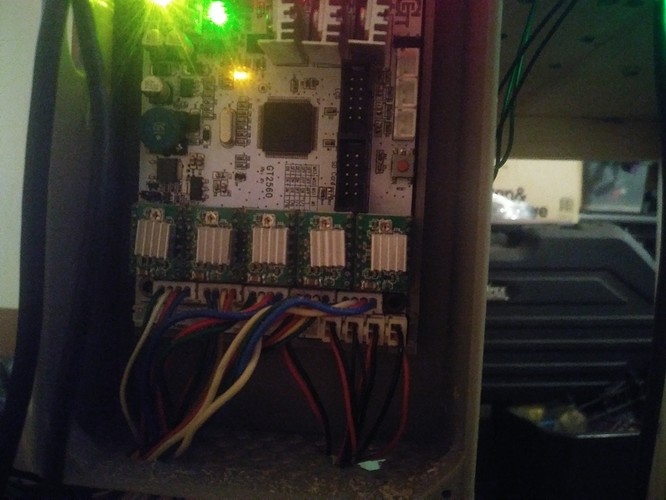 Self squaring once its all dialed in is amazing (i used a pair of calipers to position the stops, and many many square cuts to slowly dial it in) 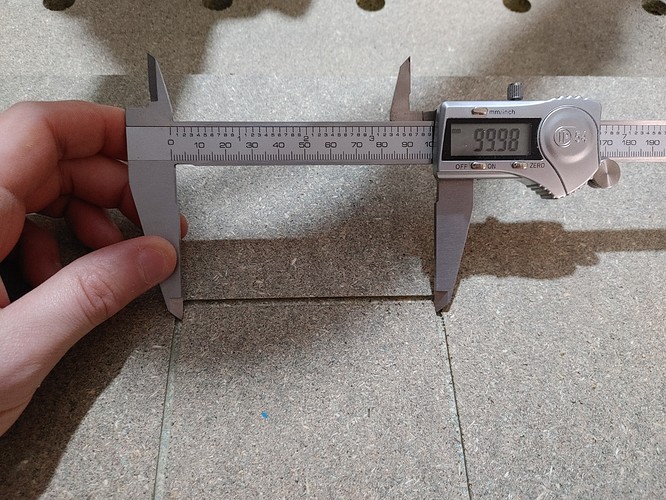 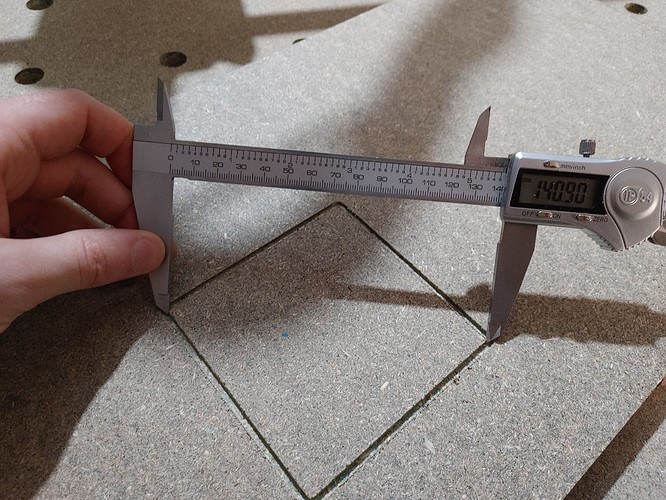 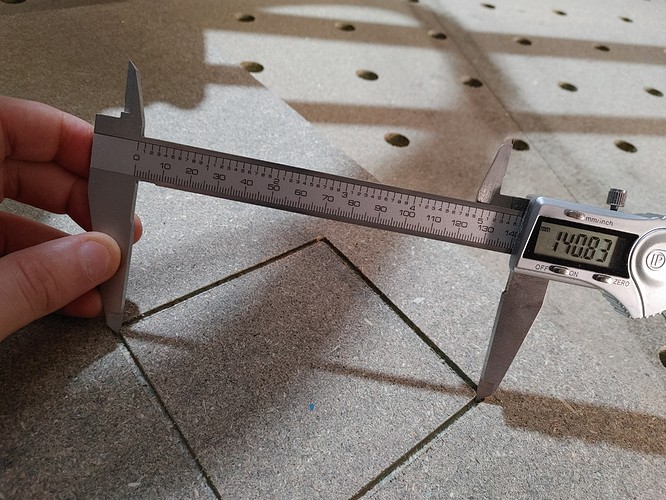 Couple of notes, cable management is a pain, i still don’t really have a solution i am fully happy with, but the 3d printed cable chains work ok.
Second, this machine has TONS of torque, I am running 2 amp nema 17’s and i can turn the machine on and use the steppers to brace the gantry while I undo the collet nut on the router.
Be aware of this when cutting things like aluminum, if you bog the end mill down, at least with my setup, you will break the end mill before it skips steps. (not that I mind of course, just don’t bog it

then of course I wanted something larger.

So umm, lowrider 2 (much to the wife’s irritation) but I am using it to make stuff for her, so that’s slowly fading.

Cutting the router plate for the lowrider on the MPCNC 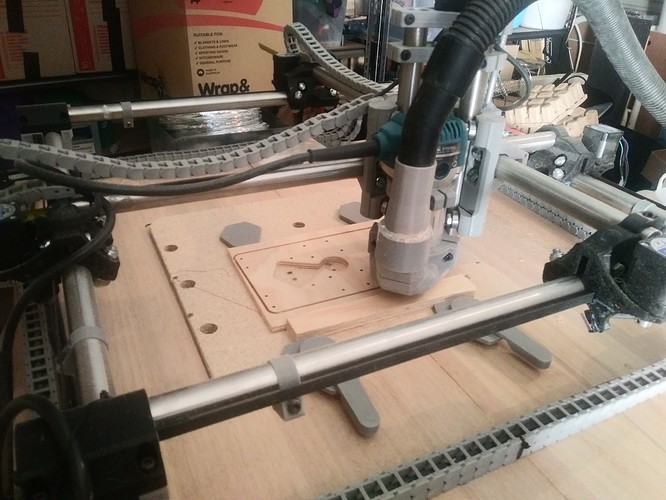 Lowrider assembled and cutting dog holes in its spoil board 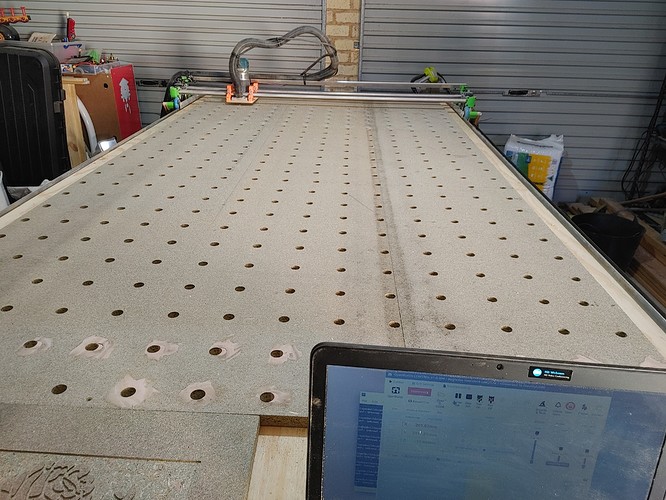 Then decided that I wanted to do Aluminum on the MPCNC, cause you know, why not

So first things first, air blast
so, using the lowrider to cut a nice box for the MPCNC so I have something to stop Al chips getting blown all over the shop 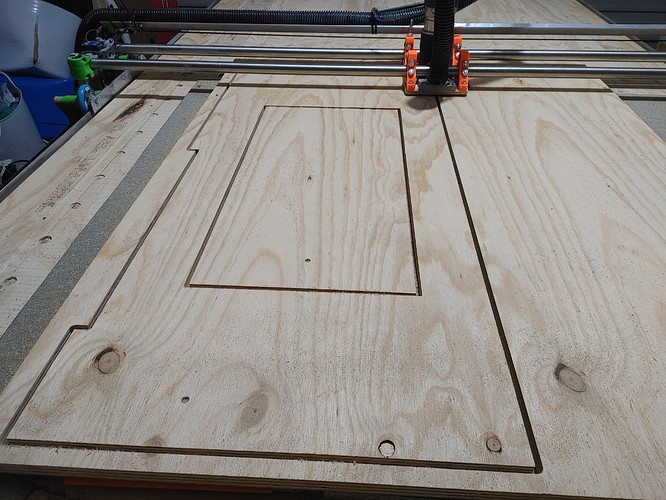 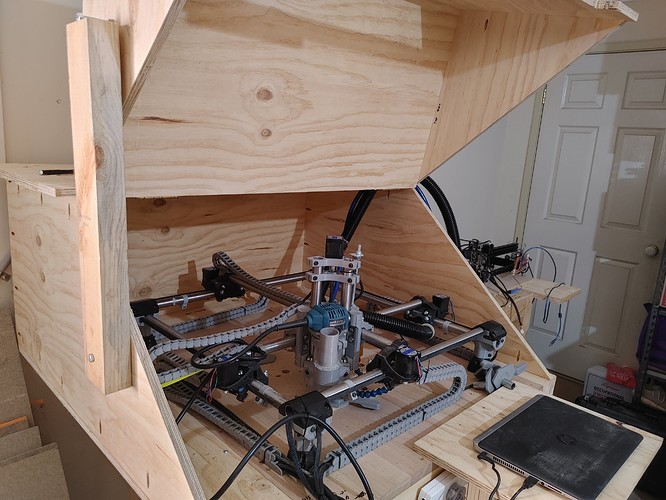 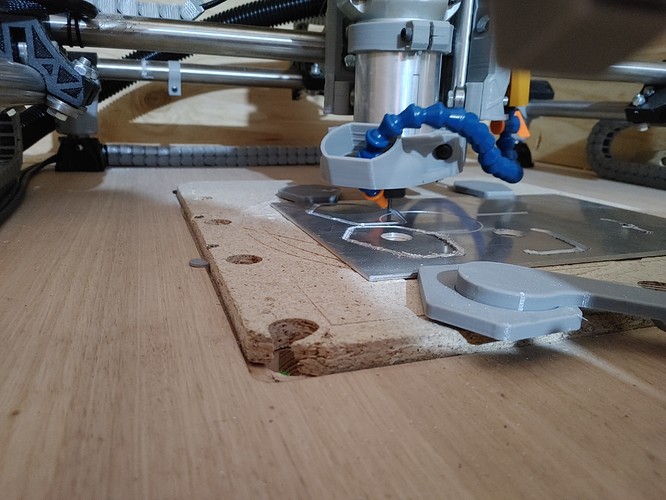 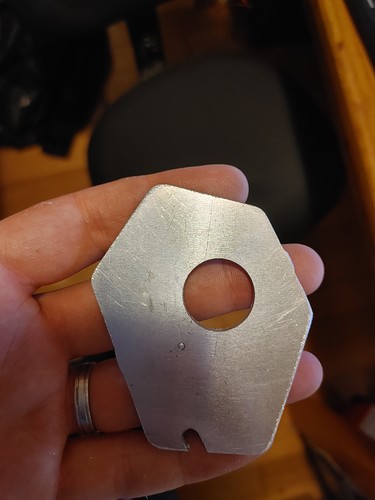 Next project is to nick Matticustard 's idea for Aluminum brackets on the lowrider, and remaking the side plates and router plate in acrylic while I am it it.

Couple of other random things I have done with the MPCNC

Cutting really thin steel plate (cause I was lazy and cutting circles by hand is hard)
Don’t try this unless you have an endmill you want to trash, they don’t last long doing this. 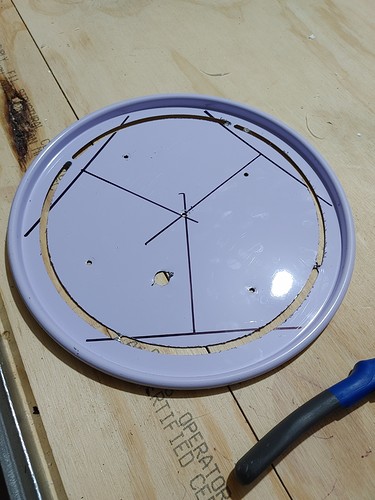 machining blackbutt on the MPCNC 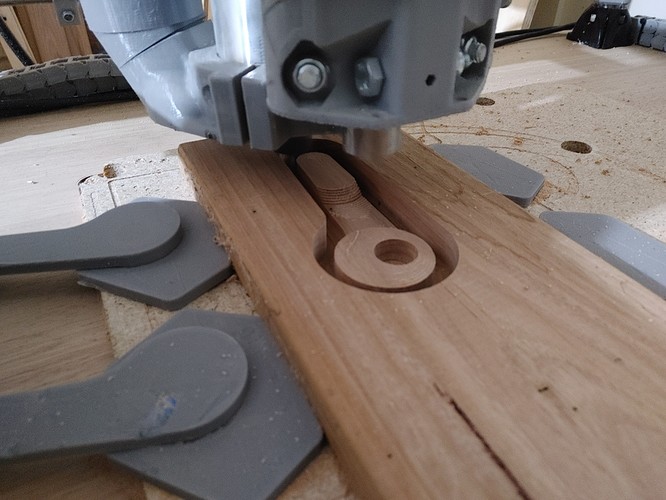 and the final results of that run 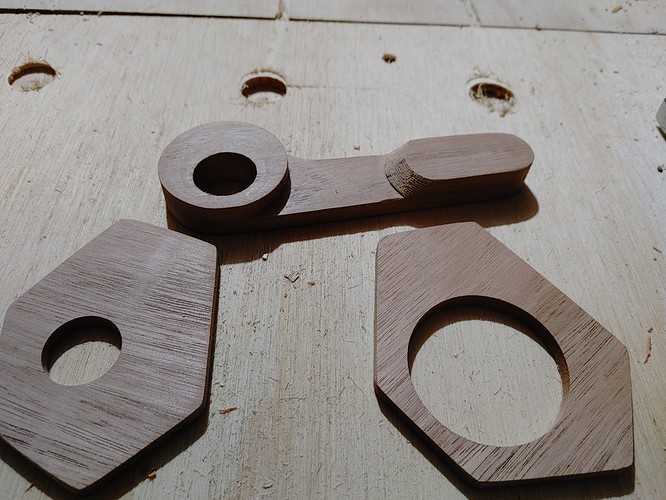 Finally, i have used MPCNC parts for things they were not really designed for.
I had a film shoot late last year and needed a camera slider for it.
So ummm, sorry Ryan 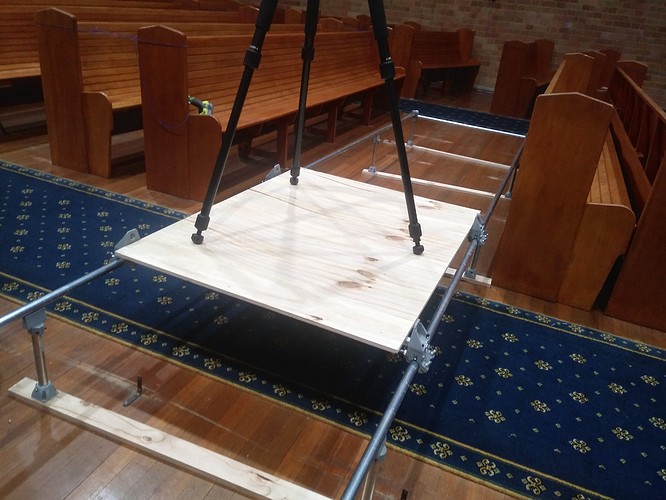 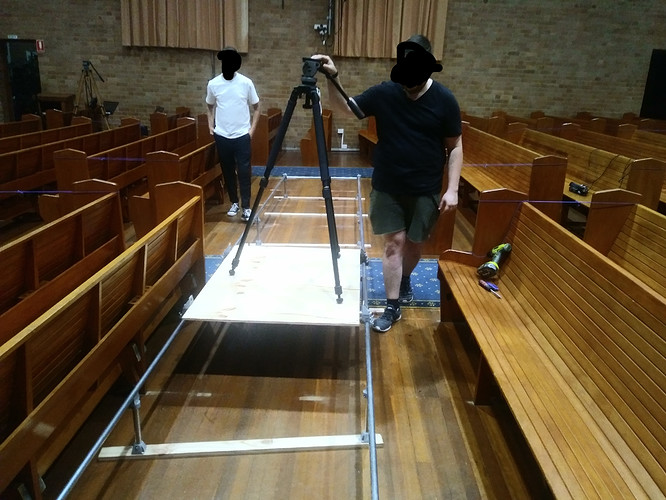 by the way, it was really smooth and quiet, so it worked, as much as these parts were not designed for this.

Anyway, thats me done, at least until I get started on the next thing.

i have been running some aluminum in the MPCNC, will post some photos when I get some good ones