This is still very much a work in progress, and I’m eagerly waiting on the new middle that Ryan is working on before doing any reprinting.

But here’s some quick and dirty shots:
One nearly full view, one of the gantry, one showing my lashed in Marker pen and one of an initial 100mm square drawn.

The good news is that the square appears to be dead on 100mm at least within the limits of a squished magic marker pen. And I did another couple of runs that showed perfect repeatability. Even with some remaining bearing clearance on part of the middle assy due to some warping of a couple of the printed parts.

Also I did one square with diagonals drawn from corner to corner and they appear to cross at the exact center, so I think I have things pretty well squared up.

I still have a lot of cleanup, need to print a box for the controller, mount the controller and power supply, add the emergency stop button, and add some legs to the frame. Then move the CNC to where I can run it and of course get my router on its way so I can try some more serious tests.

But I’m happy to see that it is appearing to be pretty darn accurate at this point.

I have hard end stops in place so it runs the homing cycle with no problems, and I set soft limits in GRBL v 0.9 so it should never hit the hard stops, but if it does they are there. I know that the machine won’t tear itself apart if it didn’t have the hard stops in place but I just like the fact that it won’t be banging against the frame if I screw up. Maybe eventually I’ll take the stops off, but for now they are working well.

Also after I get some experience with this size I plan on building a slightly larger one in the near future. 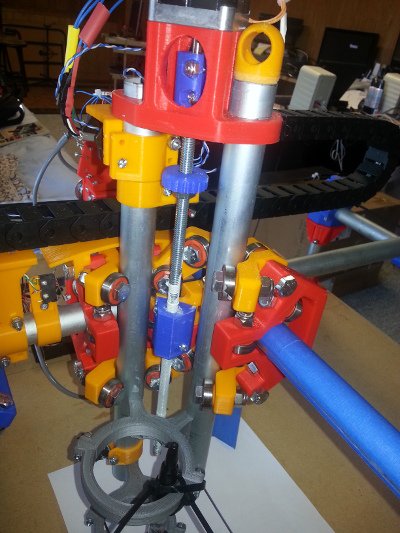 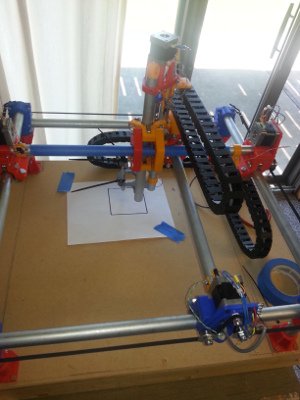 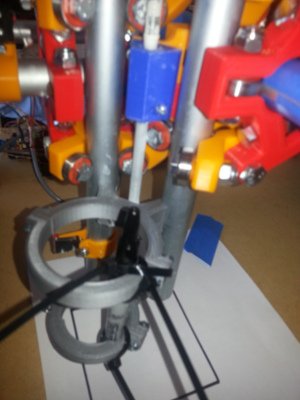 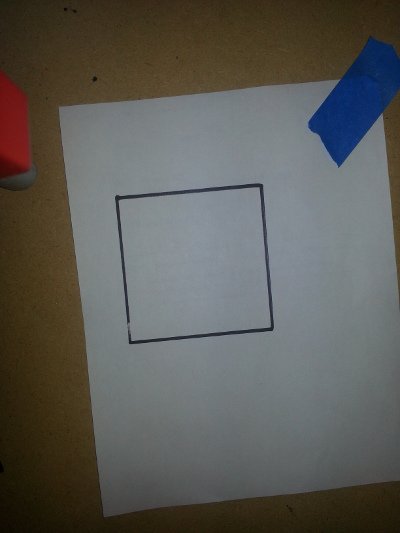 Nice, glad you are happy with it. Hopefully I get the next parts off to beta release soon.

Now quit screwing around and get it dirty…

Yes, it is working quite well with my blue tape hack on the Y axis conduit. So I’ll be interested in taking a pass at the beta version of the new middle, in fact I’ll probably print up a second set of parts planning on making a slightly larger version soon.

I did another test where I plotted the 100mm square and then drew a 100mm circle centered on the square and it printed a perfect circle perfectly centered in the square. So I think that confirms that things are nice an square and no significant slop at least when drawing with the felt tip. And I have the felt tip pretty well mashed down so it there was some slop I would expect to see it. Of course the wider lines might still mask some issues at finer resolution.

It will be about a week before the router arrives, no one had it in stock nearby but HD says that they can get it to my by the 22 to the 25th. Then I can start to get it “dirty”.

I do have a question on coordinates.

Right now I home it to the lower left corner with the homing command. But all my movements onto the work area are negative from that origin point.

I seem to recall a posting somewhere in the forums that talked about coordinates and origins but I was trying to find that earlier on my tablet and didn’t have much luck. Most of the example G code that I’ve seen is working with positive coordinates so I figure that there must be something that I’m missing.

One of the first things I’m going to try (after some initial routing tests) is to design a custom transition for a curved area of our tile and hardwood floors. I’ve never been able to find something suitable and have a pieced together bit of transition that is OK but with the CNC router I should be able to perfectly make the custom curve that I need. I even have an idea on how I might be able to actually do the entire length even on the smaller format machine as currently built. But I’ll have to do some experimentation first.

Well I can give you all the center files to start printing, but I don’t have any tool holders yet. I hope to work on that today actually. I also just finished a new corner assembly last night and tried the test prints just now, I think they are much better. If you really want to try them I am willing but a small warning, If I have to change even the smallest thing on the center assembly it usually causes the whole thing to need a reprint, I do think it is final though.

The corner needs a slight tweak but it will be done after I pack today’s orders.

As for your homing. The lower left corner is typically 0,0. if from there you need to move in the negative direction you just have to flip the stepper plugs. This would be clear if you plotter some words the would be backwards and upside down.
https://www.v1engineering.com/reversing-the-axis-direction/

I’m still a bit confused. Maybe it’s something to do with bCNC and how I’ve got things set up.

When I do a $H home the gantry moves to what would be the upper right of the photo, but should be the lower left of the workspace. If I set WPos in bCNC to 0 for XY at that point then all movements within the workspace are negative, positive movements will take you off the reservation.

If I reverse the X and Y plugs so the motors move in the opposite direction that moves the $H home corner to what would be the bottom but the problem remains, if I set the WPos in bCNC to 0 XY then all movements into the workspace are negative.

I’ve added some annotation but it may not be totally clear.

I must be missing something simple, or not explaining what I’m seeing well enough.

PS I also added the results of drawing a 100mm circle inside of the 100mm square that I had previous drawn, that looks pretty good. This is with 8x micro stepping BTW. 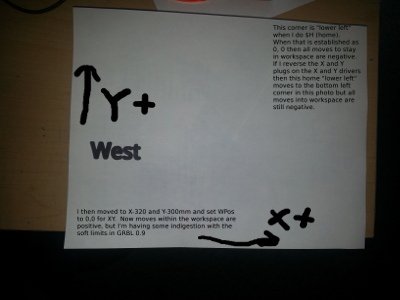 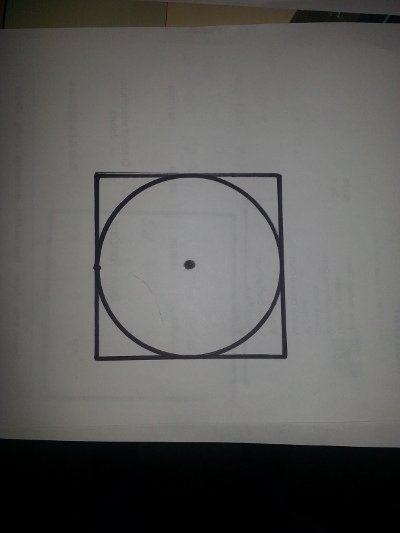 I know nothing about bcnc.

8th micro stepping should be tested in a circle the full size of your work space with a fine tip pen. I saw lots of jaggies had to move up to 16th.

Thanks, I think that it’s just getting an understanding of the Workplace and Machine Position relationships, which technically isn’t really bCNC but rather what it is reporting from GRBL.

So I’m going down that path at the moment.

I was planning on doing a circle that fits the entire work area, but got sidetracked with working though the coordinate system(s). I may have a chance to try that tonight if I have a fine tip marker, or can make a ballpoint work and see how it goes. And I may try going up to 16 microsteps now that I have things generally dialed in.

I just did a quick test with a ball point pen drawing a 300mm circle (which is the limit of my work area just before the hard limit switches would trip.

I don’t see any jaggies. It looks like a perfect circle as near as I can tell. I’ve ever so slightly out of level, probably a bit of a low spot in the MDF base, but it is on the order of maybe half a mm. Once I get the router I plan on letting it smooth out the base for me, but I’ll double check to make sure nothing shifted from when I set the legs initially.

I may try kicking it up to 16 micro steps tomorrow and rerun the circle draw just to see if there is any difference that I can see. And I’ll also try kicking up the feed rate, since that may have an impact as well.

I’ll check the updates topic to see when the beta middle parts show up, then I can get the printing started on those.I actually have enough extra bearings so that I can build another full middle section and test initially with some scrap conduit to make sure that everything is nice and tight. Also have my enclosure ready for my 3D printer, and have a Zebra plate coming tomorrow that should significantly reduce any warping as well.

If you didn’t see any issues with 8th stepping keep it, there is some evidence that the larger steps equal more power. I didn’t notice anything but I plan on trying this all again in the next few days and the next firmware will probably be 16th stepping.

I’m sketching tool mounts now so we’ll see if I can come up with something so I can let you animals try out the new middle.

For one last test tonight I kicked the feed rate up to 20000 mm/minute for XY and that didn’t appear to introduce any jaggies but it did draw the circle a lot faster:)

Next time you decide to drag race it again please get a little video!

Actually my wife wants me to do a couple of videos to post on Facebook. I’ll grab some videos tomorrow and put them where than can be seen.

Right now the 8 microsteps are looking good with GRBL v 0.9 so you are probably right, I should just stick with it for the time being.