Hey everyone! Figured it was time for me to get more active in the forum I’ve been lurking in for so long.

Right now I only have the guts built and they’re being held up by random extra junk right now. Wanted to be sure I could manage the mechanics of it before I went into the table build. I’m building a table from scratch rather than modifying an existing table so that I can add all the extra dohickies I want to.

Table will be 3x5 feet with the visible area being 2x4 feet. I’ll have LED strips recessed into the inside of the table on all sides, each independently controllable. I’m also trying to figure out if/how to put in a semi-translucent work surface that I can light from the bottom. I was thinking maybe some sort of acrylic with something like this between the magnet and the underside of the acrylic. Not sure if I’d be able to get away with that or not and can’t decide if it would work to have the underside lights a few inches below the rails. I’d expect the x-rail shadow to be kind of distracting.

I’ve never used a CNC, 3D printer, etc, so the world of g-code and controllers is pretty new to me. I’m a videographer by trade and I worked out a way to design in After Effects, where I can create patterns by playing with expressions (basically a modified version of javascript). From there is a long journey through Illustrator, Inkscape and Estlcam. At this point, I can get the patterns to work in the Zen but am having trouble with centering and scaling. Probably just need to learn Inkscape and Estlcam a little better to get that worked out.

Sandify is an awesome tool, thanks for working on that Jeff and anyone else who contributed. Was excited to see the updates that came through in the last few months.

Here’s a timelapse of the build as it exists now.

Progress will probably be slow as this is a complicated build (at least for me) with somewhat limited time to spend on it, but I’m excited to push forward.

I’ve never used a CNC, 3D printer, etc, so the world of g-code and controllers is pretty new to me. I’m a videographer by trade and I worked out a way to design in After Effects, where I can create patterns by playing with expressions (basically a modified version of javascript). From there is a long journey through Illustrator, Inkscape and Estlcam. At this point, I can get the patterns to work in the Zen but am having trouble with centering and scaling. Probably just need to learn Inkscape and Estlcam a little better to get that worked out.

Can I say, we have far too many 3D printer and CNC enthusiasts in the mix. Sorry guys, but we need more diverse perspectives in the ZXY camp! Welcome, and please keep sharing your work!

That table is awesome. I really love the fact that the sand is in no way “trapped” or anything. I know that’s your prototype, but something about the thought of my kids sneezing on it and ruining everything makes it so dangerous (and cool). Thank you for sharing your sandify designs.

I’m not too mechanical, and I’m having trouble with the design of the table myself (don’t get me started), but I think the trouble with the underlit surface is the thickness. I’m not sure how you’d get enough light through without interfering with the mechanisms. You could dump a ton of light underneath the whole thing, but like you said, the gantry would have a shadow. I’m also not sure how much will show through the baking soda/sand. I have a dark surface (it’s hardboard, or dark MDF) and I rarely see it. I only see it when there is very little soda in a spot, and the ball just barely scrubs through. I would think the acrylic would otherwise be a good choice. I’m sure the amount of droop would be dependent on the thickness.

Oh, and BTW, would it help if sandify could read in your coordinates (like from gcode) and do the limits and centering? It’s a feature that’s been requested. I want it to learn gcode anyway, but this is a bigger problem than it seems on the surface.

Thanks! This is going to be a dining room table, so it’ll be encased eventually with a glass top. I’m getting spoiled though, being able to pick up and reset the bearing to the center is something I’ll probably miss a lot when I put the glass on.

I’m surprised you don’t see much of your dark MDF. I thought I could see some of my surface through the patterns but then again, I’m using a whiteboard so maybe I only thought I was seeing some.

I’m hoping to make it over to a plastics supplier here in town and grab some samples. That way I’ll be able to at least get some idea if this is feasible or not. The whiteboard is pretty thin and sags - you can see it flexing in the video, but it hasn’t really seemed to be a problem yet.

That would be super helpful if Sandify could read in g-code make it ZenXY friendly. I’ve been surprised that I can’t find something out there that does that, though I haven’t made an exhaustive search. I have no doubt it’s a lot more complicated than it seems. My first thought was that it would be fairly straight forward, just a lot of math once you define how you want to scale or offset it. But then I realized there are so many things that have to happen before the math…

Here you can see the hardboard color sticking out past the bottom.

Gcode is pretty flexible, so it’s tough to support it completely. If I could force every line to have an X and a Y and always be in absolute, and never use arcs, then it wouldn’t be too hard. I think I have a good solution that Bill found, but I haven’t started it.

I’ve been to our plastic supplier. They have a remnant large percent off sale once per month. There were quite a few hobbyist cnc folks there too. They would definitely be able to find the right plastic if you were paying full price. What about white light and white opaque plastic, with colored sand? 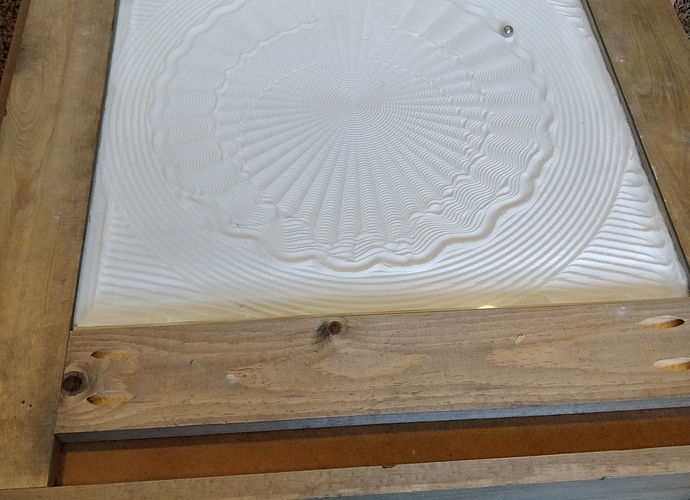 Now I want a time lapse of my table running. That looks too cool. To me it looks really impressive not being in a confined box…but the box is a lot more user friendly.

Can’t wait to see where this big big ends up!

Man, I didn’t even think about how you’d go about modifying the arc commands. Geez…

I think I’d rather have colored light through the white opaque plastic and keep the baking soda. I have some flat-panel LED lights I use for video work and could probably get a good feel for how much light would transmit through the bottom of a groove in the Zen if I simulated a pattern on top of the light. No sense barking up this tree if you can’t see anything through the baking soda.

If you are planning on mounting that light above the mechanism your magnet won’t be strong enough, 10mm is way too much space with reasonably priced magnets. If you mount it under the mechanism you’ll get the shadows others were talking about.

Not entirely sure if it would work well on practice, but I have an idea for lighting:

-Get a piece of transparent acrylic, about 3-4mm thick.

-Put some LED strips all around it, so that the LED face the thickness of the acrylic plate, not the bottom.

-Sand the whole sheet with rough sandpaper (or maybe enven get a frosted panel in the first place, probably easier and the result might be more consistent). I’d also suggest adding some aluminum tape on the bottom face of it, so that it’d reflect the light up instead of losing it on the bottom.

Light will reflect inside the sheet and get out of it, because of the surface roughness. It won’t be very efficient, so I have no idea if it will be enough light to be visible through the sand under daylight, but I think it might work well enough in a dark environment. That’s basically how any flat screen works so if it is well optimized it might do the trick.

Maybe you can try that, hopefully it may work. You could have some awesome effects with RGB leds.

Thats a good idea - I have some acrylic samples now for testing and I’ll try that out too. Trouble is the samples are, well, sample size. Haha.

I think the light is going to drop intensity pretty fast with distance from the edge. It’s worth trying though. I think it should drop proportional to 1/r^2.