I thought about upgrading the control board for my MPCNC Primo, because so far I only had an Arduino with a cnc-shield. Said and done, I bought the SKR Pro v1.2 with TMC2209 and the TFT35 E3 V3.0.1 .

There comes my problem, flashing the V1 firmware onto the screen. Because I bought the V3.0.1 and not the V3.0, I cannot just flash the firmware for the V3.0.
I tried many .bin files for other screens, because there is no preconfigured V1 firmware for the V3.0.1 yet. But every time I put the files on the sd-card, inserted it into the screen, flashed the firmware of the screen and put the sd-card back into my computer, there was a .CUR file extension on every file except the .bin file. That means that the board just ignored that file.

Then I saw a post of an user where I saw, that he also used the TFT35 E3 V3.0.1 and I wrote him a message. Long story short, he was able to flash the screen with the firmware from GitHub, which I also tried, unsuccessfully.

I just don’t know what to do, and I would be so happy if anyone could help me.

If you need more information or something like that, just tell me : ) 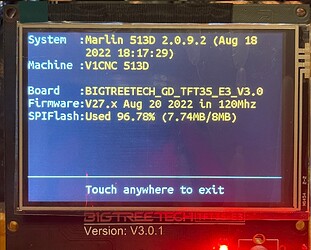 Our preconfigured files will work you just need to open them up further and get the files for your board, NOT the bin files we have up front. You will need to unzip it and get the bin for your exact board.