Man I’m so excited for this project! I just stumbled across a reference to MPCNC on a 3D Printing Redit post a couple of weeks ago. I don’t know how it wasn’t on my radar earlier. I’ve been doing heavy research ever since. I’ve been wanting to print a big project and this is the one!

I’ve messed around with the x-carve in my hacker space a few times to sort of understand it or at least I accumulated enough knowledge to start me on a path to building a MPCNC. I was going to upgrade it’s underpowered stock spindle to make it useful but now I’ve decided to just build my own MPCNC instead. I’ve had a PowerSpec 3D Pro Printer (MicroCenter’s branded FlashForge) for about 2 years and I know it pretty well for consistant PLA printing so I was ready. I just received a new roll of Inland grey for a mini Nintendo RetroPie build that I didn’t need so it went to use in printing all the grey parts. My machine has never ran so long! It normally sits on my work desk and prints a few things here and there, usually weeks in-between. I took it home last weekend and printed 24 hours a day all weekend long. Those big XY parts took over 13 hours each. Perfect for overnight printing. I just finished up all the “grey” parts today. Burned through pretty much that entire spool of plastic. I have a mostly fresh spool of the neon green so that will be used for the “red” parts. It’s humming away on my desk right now with the tool mount.

I’ve made a lot of eBay and amazon orders on Monday for electronics and parts so they should be coming in shortly. The goal is to assemble over winter break. I’ve got a couple of pieces of EMT but I don’t know what size I’m going to build yet. I hope to get a table design put together first.

I plan to use it for a few wood projects via router. Add the drag knife for sure added shortly so I can stop using my wife’s Silhouette. And probably a cheap laser engraver not too far off. I like to make wood boardgame organizer inserts so I would love laser cut 3mm plywood. I know that is probably not going to happen. Past experience with laser cutter in the hacker space has told me you need a lot of power to do that job in a reasonable amount of time without burning. I also have access to lots of foam core board so I’ll experiment with that too.

It was great to read through the Fusion 360 post. I’ve been trying to learn it as well. I have extra incentive now!

Sorry for the long post and thanks Vicious and the community for a great design and support!

Make sure that you are aware of this machine’s limitations. It is an incredible machine, but is limited by the rigidity of the design geometry. The XCarve will likely be a superior machine for certain milling and routing operations. The MPCNC will outshine the Xcarve in most everything else.

You can’t say something like that without being specific.

Exactly what do you you think each machine would do best and what size for each? What spindles on them? Have you used them both? I have not and I have no idea how rigid any of the x carves are.

A blanket statement like that benefits no one. I feel if you need ultimate rigidity mine can very easy just be built small. If you want to compare these two machines at the exact same size I would be very interested to try them out.

In all honesty I doubt there is ever much difference, They are built with different geometries in mind. I have a 5" one sided gantry and I have a full understanding of its flaws, one in which the 2 sided gantry of the mpcnc does not have, twist.

It’s specifically better at carving anything in the X-Z parts of the alphabet.

I’m getting closer and closer for all the printed parts to be complete! Only about 10 parts left or about 24 hours of printing

I finished up a spreadsheet to keep track of the BOM and where they stand. NEMA’s are on a slow boat it seems… Most everything else should be here on time for the buildup next week (I think).

That’s all for now…

Chris I have a bit of advice… Be aware that building/owning one MPCNC is never enough… Be prepared to have an addiction to the build/machine itself that you will ultimately need more than one. One for the dirty work of milling and another for laser work… Oh and then possibly another with a print head attached…

I am in the middle of my second build while printing parts for a third (no idea if I will ever build the third but at least ill have the parts lol).

No but seriously its an amazing machine. Ryan’s design is brilliant! Never get frustrated with the build or the electronics. There is always plenty of help around here… Main thing is take your time, enjoy the build, keep things squared and you will have an excellent machine for years to come.

did you check fastenal for your hardware by chance? I was able to source all the hardware from fastenal and picked up everything for around $50 per machine.

Snap some pics of your progress!

That’s a great perspective Neil. I suspect I will also build more than one at some point. I’ve ordered a few extra parts here and there, like bearings, with this in mind. I’m sure there is lots of great help and experience locked up in this forum, I just need to dig it out.

I have not checked Fastenal for hardware, I know we do have a Grainger in town as well. I was really disappointed in Home Depot and Lowe’s last night looking for the rest of my hardware. Neither had everything so two stops on a VERY cold night. And neither had #6 Lock Nuts so back to Amazon. I suspect the Menards has more selection but it is all the way across town in the really busy holiday shopping district. No thanks. Plus the the 11% rebate promo is off again.

Sorry no pics yet, it’s just a box of parts right now. I’m going to work on my torsion table design today and finalize dimensions. I would really like to cut a full 36" x 24" but I know that is probably pushing the design past it’s limits. The Y would be almost 48" long to have that much usable cutting space.

Actually that is about the size of my first build and it works beautifully. I am going a bit smaller for my second build (only to save space as it will be inside).
Neil

I have about 24"x36" cutting area, with no mid supports, and it works well. I haven’t had as much time to put into it as I’d like, so it could be better. I have the old version (not the 525) and it tends to be out of square, but I don’t think that’s a problem with the new ones. You can always cut the pipes smaller…

I don’t know if you have Ace hardware where you live, but they have the best selection of small screws, even metric for a local store.

But also, vicious has a store for the kits, and it’s a really good way to everything you need. No need to find strange parts at home depot. If you didn’t buy the parts from him, you should really give him a donation. He’s working full time for us.

omg… I didn’t know of ‘Fastenal’, and there’s apparently 3 here in town.
Thank’s for mentioning them, I’ll def. be checking that place out in person for a lot of things soon.

Great to hear the size I want is achievable! I will continue that route.

Oh yes I have an Ace. It was my local store for many years before I moved last fall. It was only a few blocks from home which was wonderful. And they have a great staff. It’s not that far away now but the big boxes are between work and home so they are now much more convenient.

I ordered a few things from Vicious to show my support.

Ok, one pic because I felt guilty. Inland (eSun?) brand PLA in Peak Green. .4mm nozzle running 200C nozzle on a 60C Glass bed with purple gluestick. Sliced in Simplify3D. 3 shells and .2mm layers. 50mm/s speed. I still have both extruders on my FlashForge clone so it could be better but I’m happy with the quality. 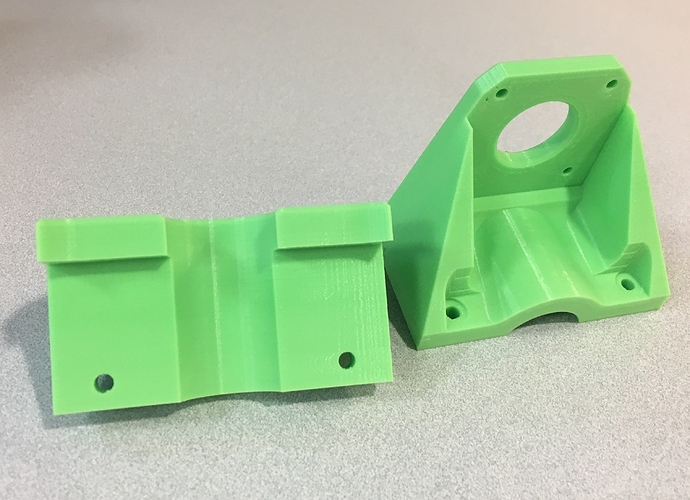 This project and the 3D printer was the hit of Christmas Eve party today. The extended family kept heading down to the basement workshop to see it go. They were amazed (as they should be).

I got a ton of work done the last couple of days. All parts printed (huge accomplishment!) and bolts and bearings installed. I even got the software and LCD working. The RC8 firmware link seems to be missing so I’m running RC7. I’m going to post a stepper driver vref question up in the Assembly thread.

I’m currently printing out the “minion” controller/LCD hinged case. I had a few issues with not adding supports on some of the parts. I just wasn’t careful enough slicing it and should have noticed the hinges need support.

I still need to cut conduit. Print out some drag chain. Get the HF router speed control. Build the table. And a few more things I’m sure. 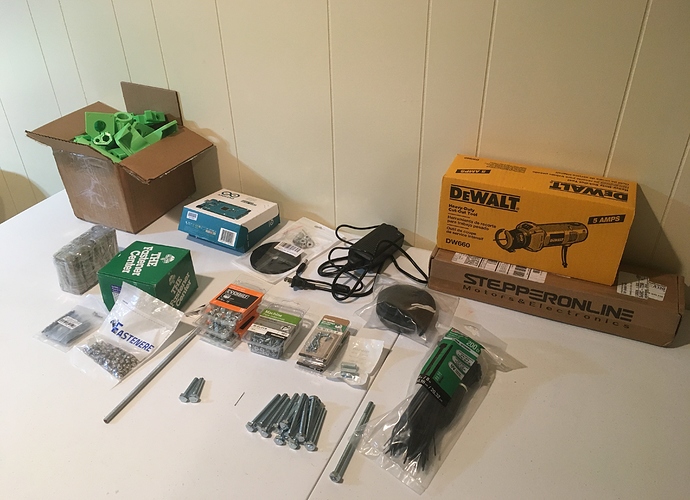 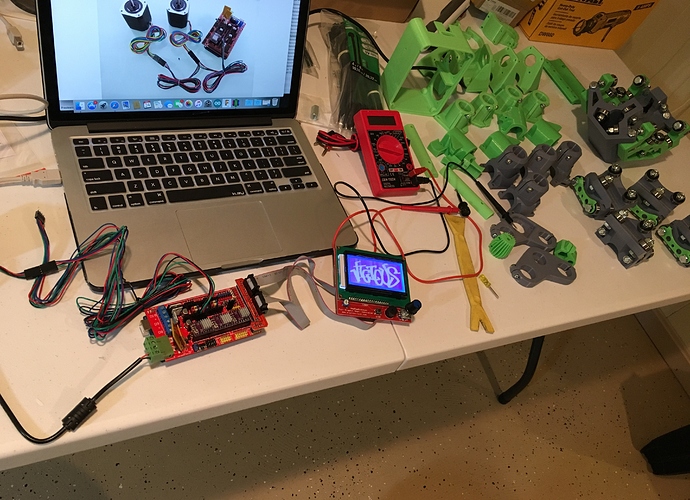 Fastenal is a good source…but if you’re in AZ or certain parts of NM, TX, and NV then it’s well worth seeing if you have a local Copper State Nut and Bolt. I got all the hardware for my build except for 5/16" coupling nut at my local store for about $26. Just gave them a list of what I needed, wandered around the showroom for about 20 minutes while they gathered it all was all set. Super easy and way cheaper than buying at a normal hardware store or even fastenal 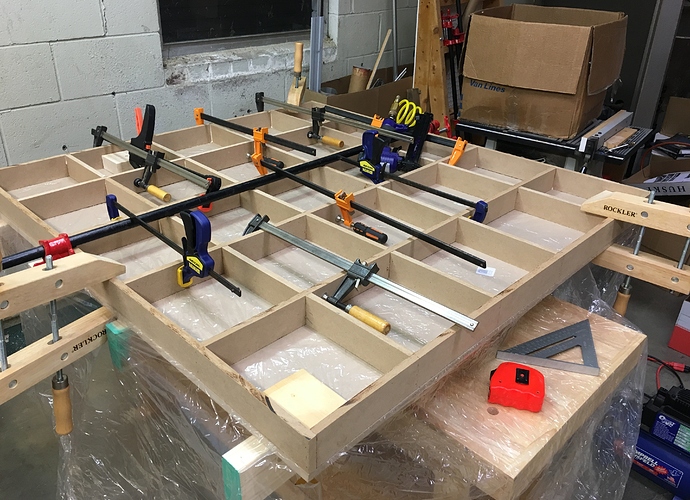 Yeah, looks like he got himself new clamps every time the color changed.

I picked up a nice set of six clamps (two each in three sizes) from Goodwill earlier this year… $2.99 each.

I do need to get some of those big wooden ones though.

Lol. Most of those are Harbor Freight sale clamps picked up over a few years. I used most all had on this project. I could have used a couple more! I had so many I made a rolling clamp rack. It is peaking out behind the cardboard box.

Today I plan to finish the table so assembly can finally begin!

I printed out a bunch of drag chain yesterday. 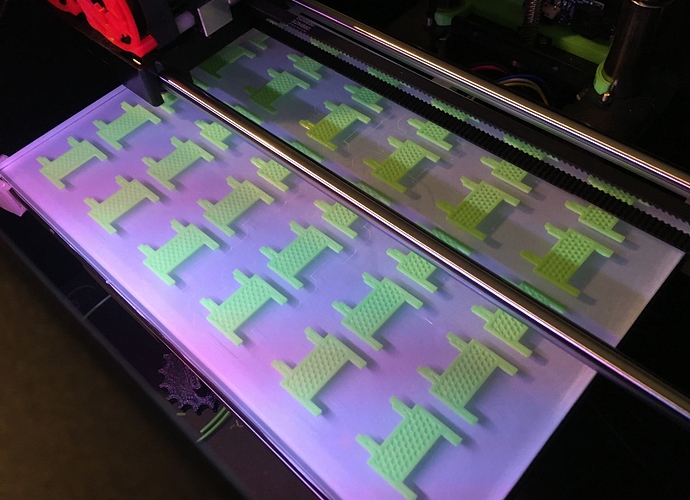 I might have overbuilt this table. It’s taken me three times longer than I expected. At least if I get tired of the CNC it will be one hell of a nice assembly table. It has a removable hardboard surface and the base is removable. I just need a coat or two more of poly and it will be done. It is drying so slow in this weather. Well I might add some drawers later. 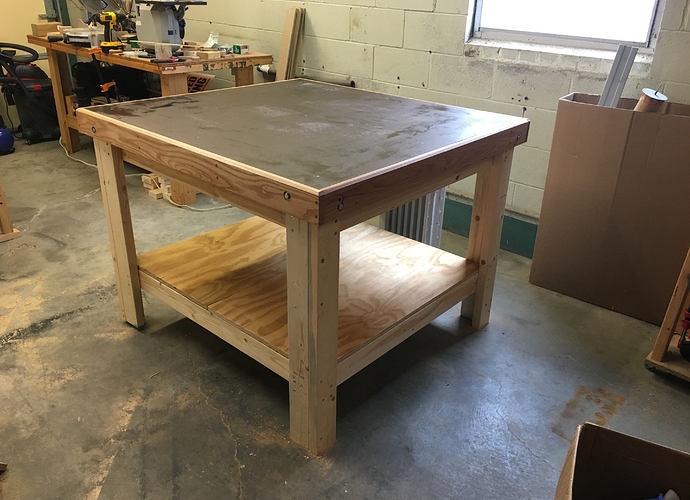