Okay, so I have Estlcam.

I don’t think it did this before the last time I updated, but maybe I just never noticed…

I recently cut a projecte that had some long movements at the clearance plane, and I noted that the movement from one cut to the next would be at whatever feed rate the last cut was done at. For a regular motion, this isn’t a problem.

After a finish pass (Which I have set to 1/2 the regular motion rate,) it’s a little annoying, but the job last night had a very long motion after finishing a drill operation. 180mm/minute for a 750mm movement was … painful.

I see references all over the place to being able to specify the feed rate on every line, but I can’t find such a setting anywhere. Or if there’s a setting for movement speed at the clearance plane, which should be able to be much faster. I might want that about half again the regular cutting speed. Not fast enough to be dangerous or unpredictable, but fast enough to shave some time off of the total processing time.

The feed rates at the start of each operation seem to work okay.

Hmmm. Does this mean that lifting the Z axis is happening at the same feed rate as the cuts? I’ll have to try observing…

Edit: Looked through the Gcode files and this is precisely what is happening. After every operation, it lifts Z to the clearance plane at the same feed rate as the last operation, then on to the X/Y of the next cut, then slows to the plunge rate after dropping back to 0.5mm (Presumably this is a cut depth parameter somewhere)

The setting used to be here: 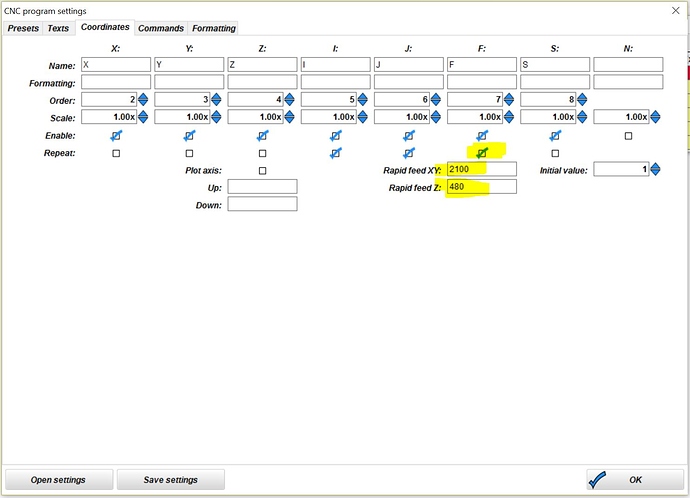 Your Z is probably doing ok, because the max feedrate in marlin is set to 10mm/s or so.

I’m sure that I had that filled in before the last update… Thanks!