Ok, well a very roundabout way to get here, but here I am.

Edit: Even more roundabout the HBot wasn’t quite stable enough, so I’m back to CoreXY

Originally, this was supposed to be a coreXY printer project. Then I got tangled in the staggering number of options, and the project stalled. And again. And again.

Then I got the laser, and intended to put it on a LowRider2. Seemed like a good fit.

Then I came across a cantilevered coreXY laser on thingiverse which happened to use a large number of parts I already owned, and practically nothing I didn’t, save the 3D printed parts… so I got printing. Unfortunately, the prints had huge overhangs and super finicky tolerances, and needed a lot of editing, or supports, which my printer is bad at, and I am too. Sadly, I put that aside.

Then I came across a cantilevered HBot design. Looked good, but wobbly. I could see it having stability issues, and it was difficult to adapt for the stability I wanted. The trade-off was that it was able to get the laser close to a wall, which is nice. If I need that, maybe I’ll get back to those designs.

The Hbot design is more straightforward than coreXY, with similar characteristics. Both motors turning for X or Y movement. Same direction moves in X, opposite moves in Y. 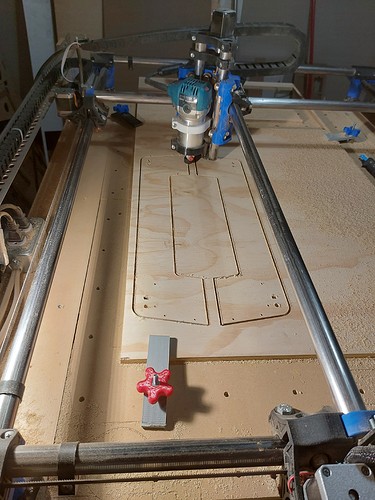 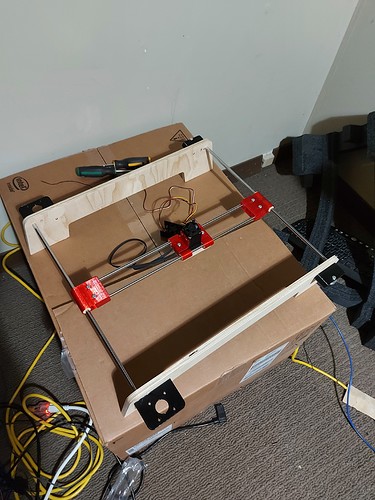 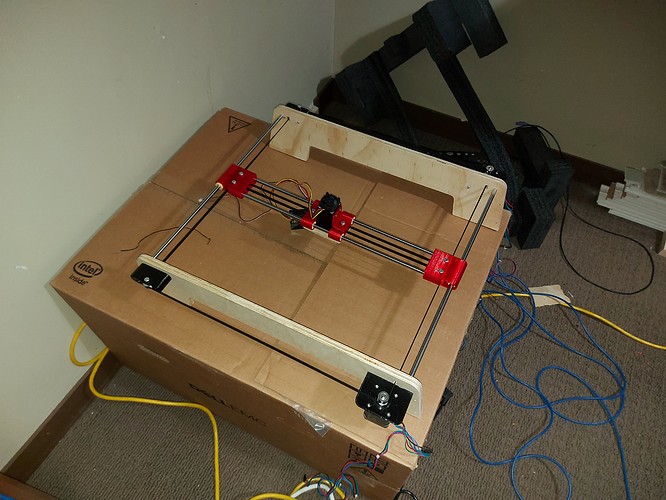 The legs need cross supports, which I will add soon, they’ll be simple plywood rectangles, nothing too fancy, I think.

Endstops are still to come, haven’t decided on stuff. Might try sensorless homing, the Bart Dring ESP32 laser/pen controller says it supports it.

Oh, I assembled with Drylin LM8UU bushings, but they’re super draggy. Might try a little lube, but I think I’ll need to sub in regular bearings. These are just too much resistance.

That looks really good. Is that your design or can you share a kink to the original?

It is a nice lean frame. Not too many prints. A lot like the zenxy, I think.

This is entirely my design. I’ll probably put it up on Thingiverse after I get the endstops sorted out.

The sliders on the X rail are 2 pieces each. One part just holds the LM8UU bearings, and the other has the holes for the rod holders and holds the 2 toothed pulleys.

I was looking at this and wondering how well it would work if it used the belt routing from the cantilever corexy. The far side would still be supported by the linear rail, but fewer parts and belt (I think). The plus side of doing the belts on all sides is the far end is less likely to bind. Just thinking about i over my coffee.

This H-Bot was what I found. Then I changed… Well everything. I looked up a bunch more H-Bot designs, and once I had wrapped my head around the belt routing, this is what I’d come up with.

The design goals for printed parts were to have zero supports needed and as few as possible overhangs,

The kinematics were to have everything all on one level, so no angular strain on rods or the laser shuttle from belt tension.

Nevermind. Found some problems that are going to need a major relook. Basically the idler side of things just doesn’t get any sideways power. It will follow the motor side, so it sort of works, but accuracy isn’t good. Looks like it’s back to CoreXY decision Hell for me.

Okay, so full speed ahead and damn the torpedoes!

Redesigned as CoreXY. Changed what I had to kept what I could, which was precious little.

You’re watching the tool, and think: “Is it going to clear that clamp?” 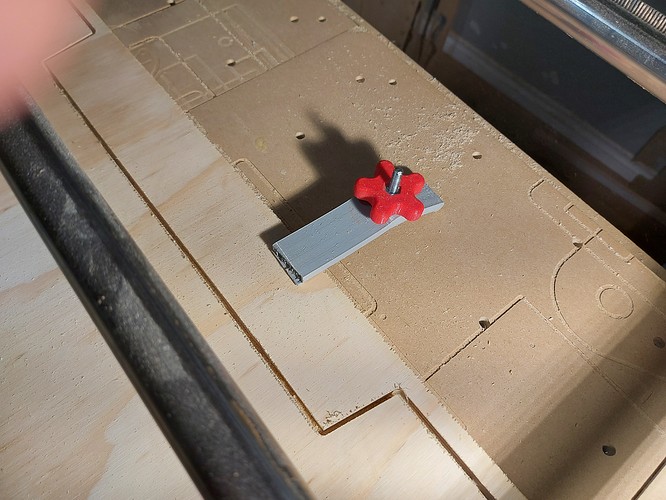 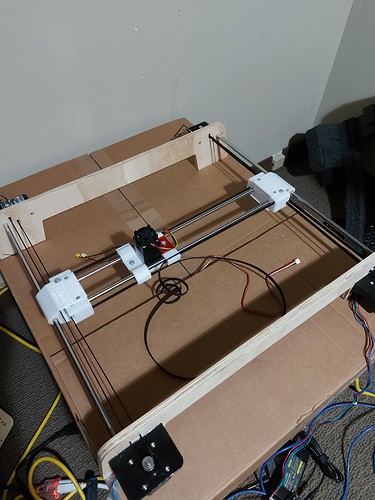 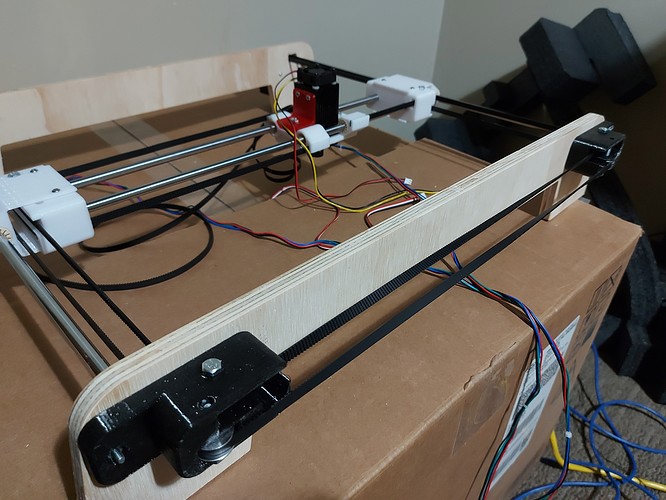 look at the pieces, and they just did not line up. No good to swap sides either.

I put a half twist in each belt between the corners, because it was either that, or make the belt clamps at the centre unique parts with many wrong ways to install them. As is, they are identical parts that only need to be the right way out. They work on either side, and either way up. The twist was way easier to keep straight in my head.

I tried reaming the drylin bearings a little to see if I could make them slide easier. They’re a little better, but still awful. Almost acceptable, but way too much resistance, the motors will skip instead of moving in the Y axis. X is ok, if I don’t tighten the belts. Probably would need belt tension exactly matching, not just close. I suppose I can crank the current.

One issue is that the drylin bearings are a bit bigger than the rollers at 16mm diameter, as opposed to 15mm diameter. Of course I designed for the parts in hand. Not really looking forward to altering the design. I might just wrap the bearings in tape for now. I still need to do an endstop solution, and make the side skirt pieces.

So I decided not to do the tape wrap, and edit the parts for 15mm diameter linear bearings. Reprinted in what I shall now forever call “Jolly Rancher Red” (thanks, @jeffeb3 )

Twizzler red is the colour my MP3DP parts are printed in. Twizzlers don’t have the transparency to them. 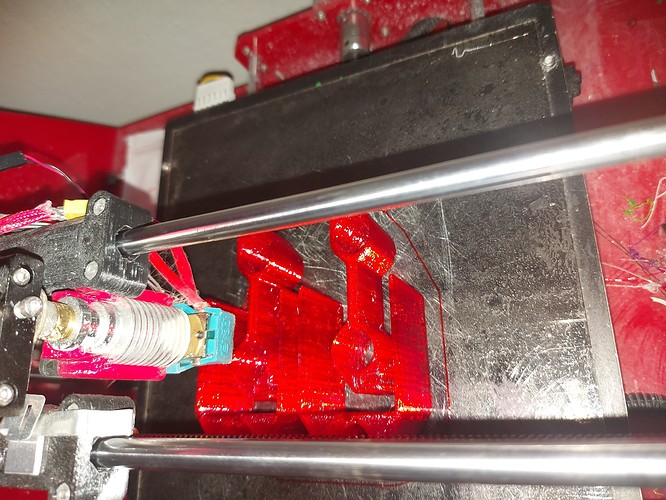 The MP3DP needs some tweaking. Dimensional accuracy is still a bit off.

Getting this debugged was a pain. Apparently one of my 2209 pen controllers is buggered. The other one works, but now I have no zen table. I’ll put the RAMPS back in that until I am sure it wasn’t just a bad motor connection.

I tested movement, and it was all good, then installed light burn, and it did something weird. 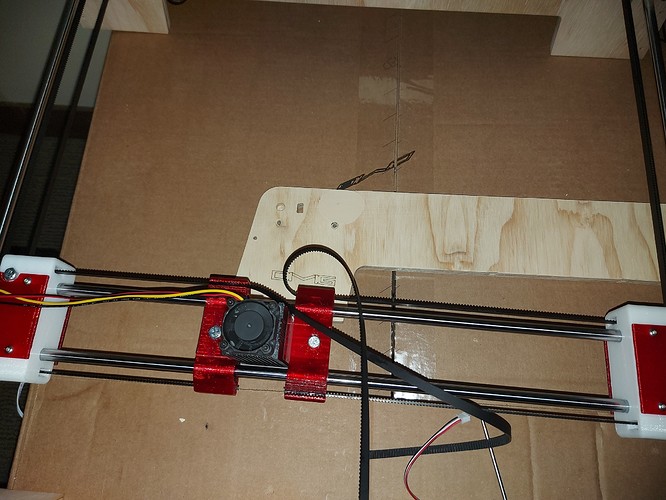 You see on the box, the distorted image burned… dunno what caused it, but after that, X and Y moved at what appears to be 22.5° towards top right, and persisted through resets and reflashing the firmware, until I found the

Anyway, I don’t know what I did wrong with Lightburn, not sure I want to troubleshoot it, bit not sure what else to use, since I haven’t got other CAM software for the laser. I can’t find what light burn set either, it’s like it reset either microstepping on one motor, or steps/mm, but both of those looked right when I checked

The second burn on the plywood looks right, and is as close as I can see to the target width of 55mm, so probably is ok. I reran the laserburn gcode after resetting the board and turning laser mode on again with

I just found this topic, and this is impressive work in such a short time frame. I really like it though, it looks simple yet effective. I too would be highly interested in all of the part files to try and make one myself (once you spend all of your time working out the bugs

).
What laser are you using? I know very little about the lasers for a DIY engraver, I never really cared to build one, but I’m starting to think it may be fun to build one for other projects I’ve had in mind.
I’m also going to need a source for that Jolly Rancher Red filament. Its beautiful.

Well hello hello! Look at this! I’m planning to make a pen plotter, and this is certainly up my alley. I’ve been meaning to make an h-bot, but I wonder if it’s too unstable. I think that axidraw and these professional machines with aluminium rails are precise enough, but if I’m supposed to print the parts myself and use steel rods, an corexy option like you are going for - is perhaps better. Thanks a lot for the inspiration.

Would you say an corexy frame is overkill for a pen plotter? I might use it for laser later on, but now I just want to make a dedicated plotter. 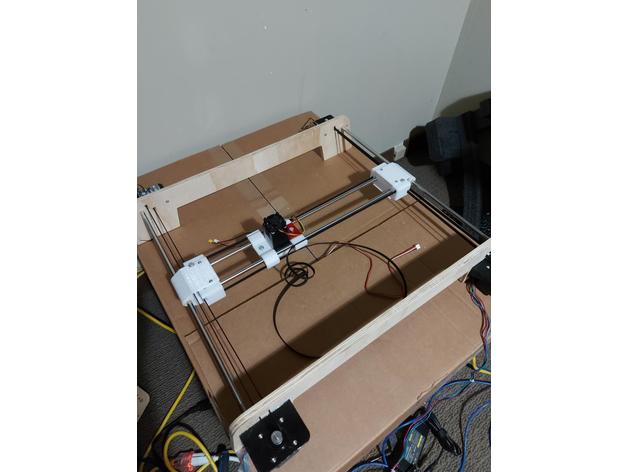 My take on a CoreXY laser engraver. This is still in progress. I haven't got endstops figured out yet but I've got it working for now. Note that the LM8UU bearings are pretty much press-fit as I printed them. I used a clamp to press them into the...

Funny thing, I was googling corexy plotter/engraver machines, and yours showed up on google, but gave a 404 error. Perhaps I’ll just go for this then!

Would you say an corexy frame is overkill for a pen plotter? I might use it for laser later on, but now I just want to make a dedicated plotter.

IMO, a CoreXY mechanism is better for a pen plotter. Because the pen is lightweight, use a 7g servo to give it the Z lift, a mechanism that doesn’t have to sling a motor around gets even better. The pen can move quite rapidly and still print perfectly.

What do you think about size? I’m considering a 50x70cm area, to have plenty of room for a2 sizes. The 8mm steel rods are quite stiff, and the short side will use 10mm rods.

Probably wouldn’t hurt to try 600 and 800mm length rods, the laser shouldn’t put much stress 9n them, and with all 4 sides on the frame, it’s pretty solid. Maybe it would need corner supports to provide a bit more.

The DXF files should be easy to extend for longer rods, and I cut the sides on the tablesaw anyway. I’d love to see you build it! 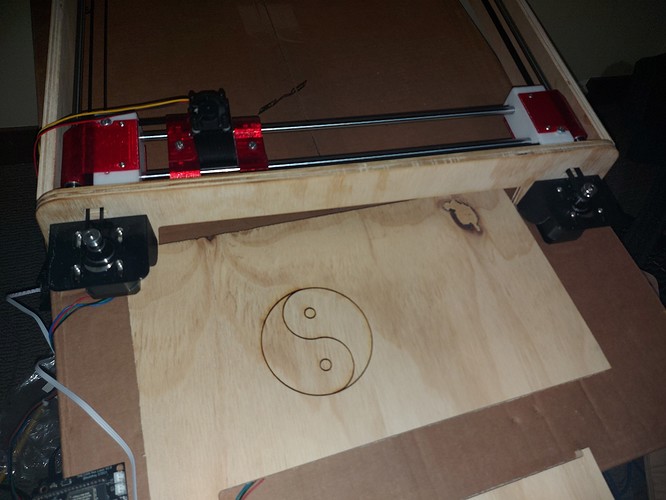 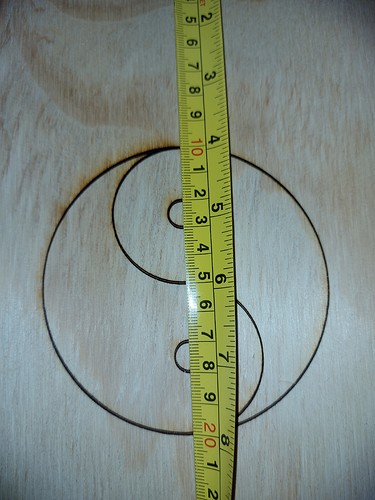 Yes, that’s what I’m thinking as well. On the other hand, a servo with a spring holding a pen should be much more forgiving on z accuracy. My only worry is sideways wobble.

What do you think about mm/s, would a bigger work area impact speed when working in a corner??