I bought a 90’s Craftsman table saw from Craigslist. They made a ton of these saws, and there were literally 7 I found in my first search for them. I bought one, and I’m cleaning it up. Not really a rebuild, because it’s in great shape. But it will be in much better shape by the time I’m done with it. 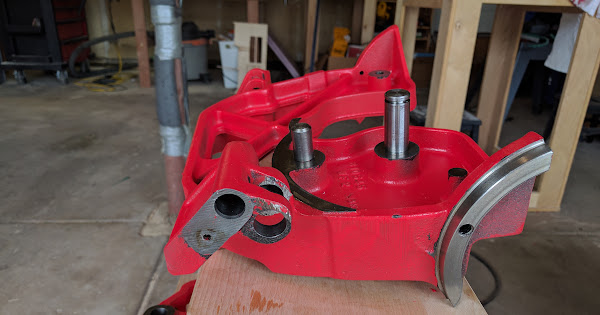 I bought it for $160, and I also got a harbor freight drill press, which I gave to my dad. Motor seems great. The angle adjustment was stuck, but after taking it apart, the reunions were just pinching together.

I’ve cleaned the top, first with a steel brush, and then I let it soak in vinegar for 24 hours, and then I attacked with a scotch bright pad and an orbital sander (at the same time, not sand paper). There’s still a little rust, but I don’t want to change the flatness of the top but being too abrasive.

Try milkstone remover (phosphoric acid) on the rust. Clears it right up and leaves a protective finish (iron phosphate) that does a good job of keeping more away.

I used 220 grit sandpaper and an orbital sander on my saw top. When we moved to this place I told the movers to just dump all my tools in the middle of the barn and I’d figure out where stuff would go from there. Week later when I got around to the barn I found they put the saw under the only leak in the middle of the barn… Wd-40 and a rag to remove the crusty stuff, then sanded the whole top to get the little pits out. It’s cast iron, so wasn’t too worried, I wouldn’t do that to one of the cheapo contractor saws. I’ve seen saws with granite tops as well, that would be cool.

I love old(er) tools. They work amazingly well and were built before the pansies needed warnings about not cutting your finger off. I find restoring tools is a lot of fun, but really old ones sometimes require custom made parts.

I have a Craftsman Lathe from the 1950’s that I restored and got working again. Paid $50 for it. I also picked up a 8" table-saw/jointer combo that I still need to restore from the 1950’s too. I’ve been lucky in that most of the ones I’ve worked on have just needed new belts and bearings re-packed.

I don’t even know how old my air compressor is. My grandfather bought it used for my dad before I was born.

Unfortunately my table saw is a cheap Craftsman ‘hobby’ saw the wife bought for me our first year together. The gear for the arbor no longer works so you have to pull up on the saw blade to raise it… not exactly safe. I’m thinking I’ll probably replace it later this year, but I need to clean out more of the garage first.

@Bill, I haven’t seen MSR before. It looks like that’s the same stuff as naval jelly, which seems a bit more available. I really want to put it back together, but there is a voice in my head saying, “do it right, or do it again”. I should probably try again to get those last few speckles of rust.

@Barry, I’m glad it worked for you. 220 probably isn’t that dangerous, but I was worried I would sand it out of flat.

@David, There’s something about the way engineering was done before CAD. The machines are just simple, and overdone. Mine isn’t that old, but the design is, mostly. I found some even older ones, but they had so much rust, I’m sure they would be more money in materials just to clean them. And the motors would need more work. Buying an old lathe is a good idea. I don’t “need” a lathe, but I sure would like having one, so it would be a good refurb. I will need to learn something about lathes.

I also kind of want to paint the underside, but with my schedule that could add weeks to the build…

Yes, Naval Jelly has the same acid in it, but costs many multiples higher. But it might not be as easy to find if you’re not near some dairies, where it’s typically used.

They sell MSR at tractor supply. I think the closest one is 45 mins away. Home Depot had a pint of naval jelly for $6. I tried it. It seems to do a good job, but not a silver bullet. Maybe I need to soak it longer. Anyway, I have it in good shape, I put some wax on the top, and I could be ready to reassemble it, but I think I am going to try to paint it. I’m going to try petroleum jelly as a paint mask. Wdyt?

The paint might do weird things with the petro jelly. Might run. If you’re painting the bottom, just shoot the whole thing. Foam ear plugs work to mask out bolt holes.

I was thinking more for the gear parts of the “chassis”. I have it completely disassembled. I’m going to test the jelly on some carboard or something first to see how well it works. But for these curvy goofy parts, rubbing on something, then removing it with something seems easier.

It worked out fine. The only trouble is you have to be really careful applying it. Because the paint just won’t stick to it. The edge was a little jagged, but I think that was because I was a little crazy with applying the jelly. I’ll post a pick of what I’m trying to paint, and maybe I’ll get more sympathy.

It worked out fine. The only trouble is you have to be really careful applying it. Because the paint just won’t stick to it. The edge was a little jagged, but I think that was because I was a little crazy with applying the jelly. I’ll post a pick of what I’m trying to paint, and [color color=red]maybe I’ll get more sympathy.[/color]

Or we’ll just make fun of you…

As long as you do it in a sarcastic way, so I can’t tell the difference.

Shouldn’t be a problem! 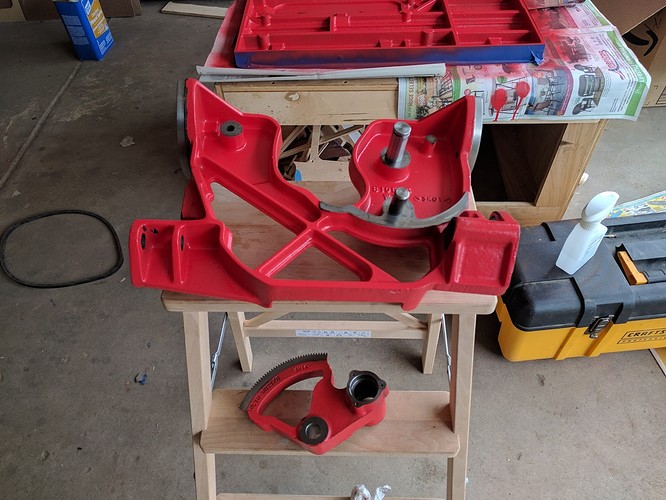 There are a few more photos in the album, but this one shows the parts after the painting.

Now that I’ve done all the parts, and removed the jelly, here are some notes:

In the end, a crappy tape job might have been just as good, and faster, but The jelly has the advantage of failing in a way that leaves less paint, whereas tape fails leaving more paint. But I have it done, and at least it was a good learning experience. If I ever think, “I wonder how I’m gonna mask this”, at least I know of one more way.

Nice! Next time I’m in the barn, I’ll take a photo of the “paint station” I set up. There’s purple overspray all over the place!

My miter slot to saw blade is off by 0.010". Working on that now. Then I should be able to cut something. 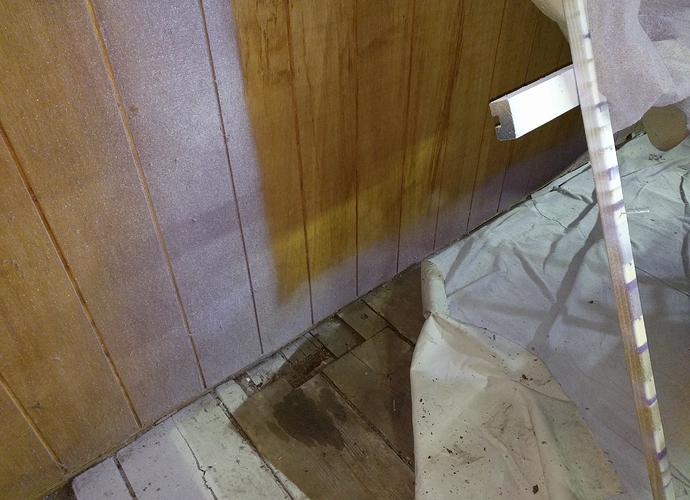 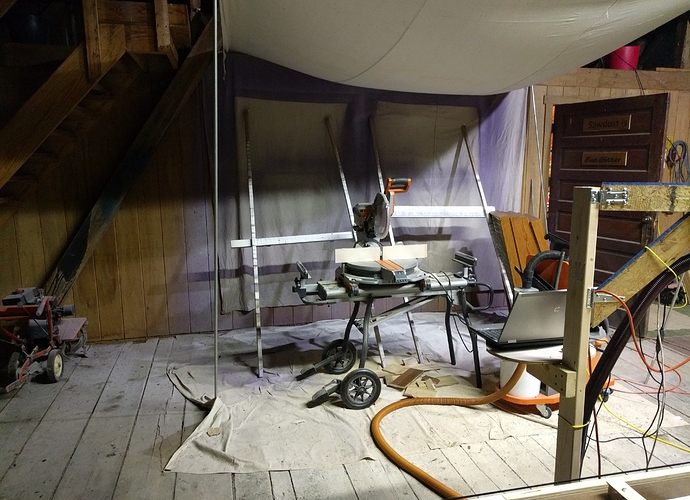