Nothing fancy, but used the mpcnc to face a cutting board I’m working on. The plan is to burn an image in the middle with my laser.

I also think I’m going to face the second side cutting in only one direction. I’m still getting a little flex in the Z axis that caused the bit to cut deeper in one direction vs the other. 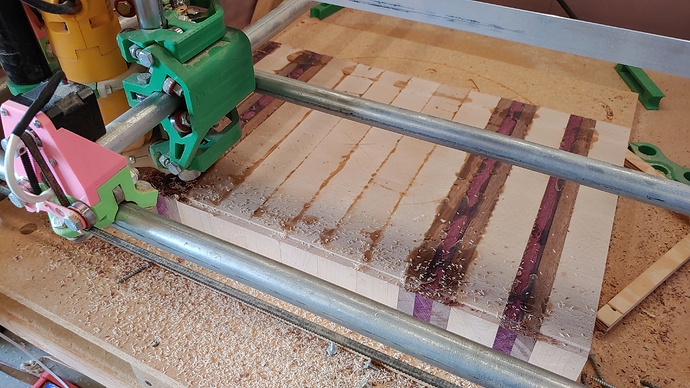 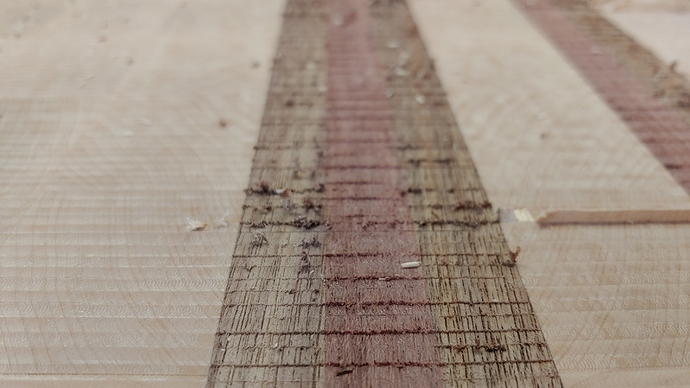 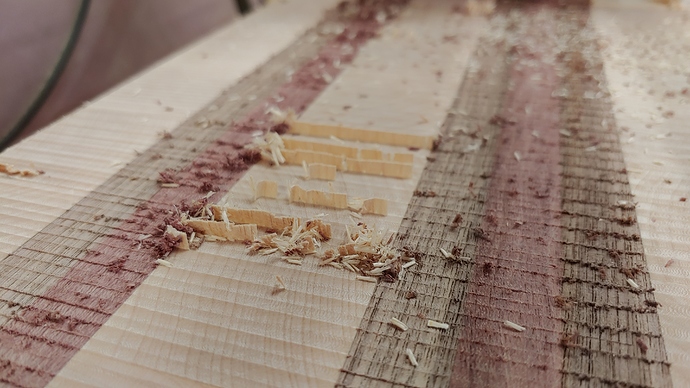 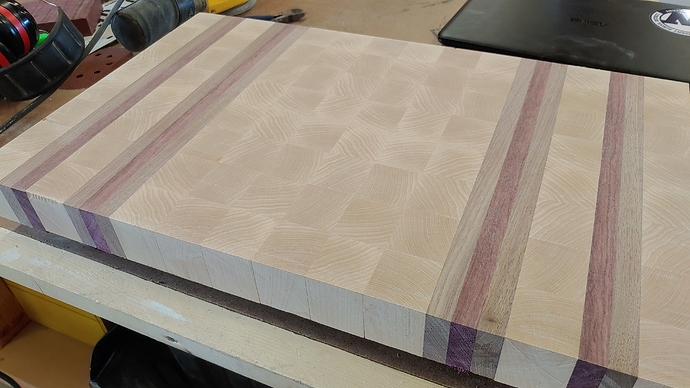 Are you concerned about the cross-grain vs. long grain expansion with humidity? A wax or oil coating will help but I have no experience so I am paranoid about whether it would be enough.

Well… Ignorance was bliss. Now I probably won’t sleep tonight reading about it.

Honestly, this is my first board, so I’m kinda learning as I go. The original plan was to do solid maple without any of the other wood, but I ran out of stock before getting the size I wanted. The other wood was added as an after thought.

The one use case I intended for my MPCNC was to make a big cutting board. I finally got the surfacing bit, but haven’t had time to glue up the board. Maybe later this summer.

It’s a nice looking board.

If it is a problem, it would be the maple growing, and the walnut not. Then the joint between them would crack, or the board would cup.

It is a real problem, but I also know it is frequently way oversold. I have no idea if it will really be a problem in your case. It will take the better part of a year to find out.

Nice looking cutting board!
Also I’m glad that I’m not the only one with PINK parts on my MPCNC!

My original build was nicknamed Miami Vice by some of the forum members at the time.

I’m surfacing with a 1/8" bit. I have a much larger bit, but didn’t feel like swapping it out. You should see less “stair step” effect with a larger bit, but any canter in the Z axis will end up with grooves. 60 grit in a random orbital fixed mine.

I will add that right now it’s cutting the second side and cutting in only one direction is leaving a much better surface finish.

This is where the board sits now minus some additional sanding.

I’m working on sanding out the rest of the burn marks at this point. I cut the groove by hand using a palm router. The hard maple burns really easy if you go to slow even with the router set on it’s slowest speed, slowing down for the corners allowed it to burn

I also put a 1/8" round-over on all of the edges using the palm router too.

The board is currently in my wife’s hands at this point. She’s going to be making me a design that. I will burn into the center of the board using my laser. More pictures to come. 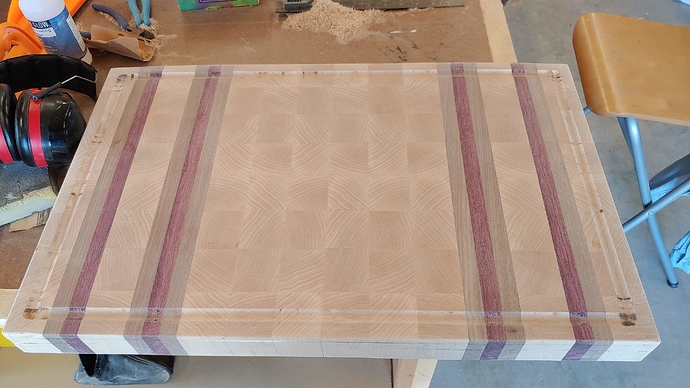 If the wood is properly stabilized then it should be ok. I tried to build one like that and the maple wasnt stabilized and shrunk almost 1/2 inch across the whole thing which of course cracked.

I will start off saying, I’m sorry if this is stupid question!
What do you mean by stabilized?
Seasoned wood? dry wood? Wood kept in a Humidity control environment?

What about inserting some bow ties??

As wood changes in moisture content, it will grow and shrink. But not uniformly. It grows more across the grain (the width of the tree trunk, not the height). So generally, you want to avoid a pattern like this because the hard maple is going to grow left, right, close and far. But the bands are going to grow left, right, up, down. If the maple grows too much in the close to far dimension, and the bands don’t, then it might break the glue joint, or even the wood and crack right next to the bands.

If the wood starts out at a stable moisture content, and then stays at that moisture content forever, it won’t change shape. But generally, even indoors, winters are dryer and summers are wetter.

The “stabilized” Kurt is talking about is making sure there isn’t too much moisture in the wood when you start. Most wood is kiln dried, so I think it is all pretty much stabilized. But if not, you need to let it dry out first in the shop to get to the indoor moisture content. If you mill a piece of wood that hasn’t dried out, it can twist and turn when it dries, which really sucks.

All of this I have read about. Many times. All over. It is common to take it into consideration when designing with real wood. But I also haven’t seen many examples of failures. I wonder if the fear is overblown. I am certain a wet piece of wood will change shape but I’m not sure what humidity extremes are needed to make a cutting board like this buckle enough to break. I have had chair seats on cheap furniture buckle, because they were firmly attached to cross grain aprons.

Plywood has grain going in opposite directions. It does change thickness, but the glue and relative dimensions are enough to keep it generally steady. Maybe the geometry here is strong enough to resist the same forces. If it holds up for a year, it is probably fine.

I don’t think bow ties would help. I don’t think they would have an affect if they were just on the surface, and going through the whole thing would make the bands weaker.

@jeffeb3 has a lot of good information.

I think I have a few good things going for me in this regard.

Walnut and maple are both pretty hard woods. Harder woods tend to shrink and swell less as it’s harder for moisture to get into them.

The walnut has also been 4s and sitting on my shop floor for 6 months at this point. Including through the winter. It’s pretty dry at this point.

The maple is only a few months old. I cut to length, 2s, and ripped it a week before doing the first glue-up. This would have given the wood a chance to shrink/swell as faces that used to be inside the board are now outside. When I went to re-check square after that week, the boards were still straight. This leads me to believe the boards were pretty dry when I started.

The only wood in the board I question is the purple heart. It was a last-minute idea and was given the least amount of time to shift.

The board will also have cutting board oil soaked into it. It should help to keep moisture out of the board. Being thicker, it shouldn’t cause much swelling on it’s own.

I’ve had a few cases where boards moved on me. It’s usually rough cut lumber that I’m jointing and planing down to my useable boards. I was taught that anytime you’re surfacing all 4 sides, that after each process, you should wait 24 hours. Then double check the board before moving on. This is because each time you open up a new face on the board, you risk it warping in that direction as that part of the board now dries out.

The Iroko I had a bunch of was pretty bad at this and the Ash I had was REALLY bad at this. The Ash was where I really learned how bad warping can be. I had laid up a little board I was going to use for a sign. I didn’t know about letting it rest after each step. I came in the day after removing the clamps to start cutting it to final dimension and the board looked like a see-saw. I still have the board just cause it makes me laugh when I see it.

A friend of mine does high-end furniture. He built an entertainment cabinet out of solid walnut for a client. When he delivered it, he told them that he’d come back in a few months to adjust the doors as the cabinet finished settling. 3 months later, the client calls complaining about the doors not closing. He had to re-explain everything he said the first time and then the next day he drove over and fixed the doors.

I have a small aquarium stand in my office that I made out of solid Oak. I used Oak plywood for the horizontal pieces, but the doors are rail and stile type from the solid oak. I had to adjust the hinges on them a few months after finishing too as the door gaps were no longer the same on both doors.

Those are just a few examples of it happening. I think it happens a lot more than we know, just not in ways we ever see it. If you ever build anything with in-set doors where you’re trying to maintain a tight gap, you’ll see it there.

The cutting board may end up having issues. It is my first cutting board. If you look close, you’ll see my squares don’t all make perfect corners either. If this one cracks mid-summer it won’t upset me. I’ll just go pick up more wood and make another one. This one already isn’t really the size I was shooting for, so I’ll probably redo it anyways. It’s all a part of learning.

My wife is working on the design for the laser engraving today. I’m hoping I can get it burned this weekend and finish it up.

A lot (probably most) traditional wood working methodology is predicated on accommodating the movement of wood.

Frame and panel doors exist primarily to give the panel room to move.

Tongue and groove paneling does the same, and was often used for the backs of cabinets (before sheet goods were invented). It allows the wood to move without opening gaps, where a solid panel would be guaranteed to crack.

Been ruminating on this topic a bit more…I think the cutting board is almost a worst case scenario (sorry…).

Because the maple is all exposed end grain, it’s going to respond to humidity changes relatively quickly, while the stripes aren’t going to move appreciably along their length at all. Other species would be worse, I’m sure…

It is interesting (to me at least) to note the impact of “materials science” on design. A lot of “Mid-Century Modern” design, for instance, was all about showcasing the possibilities of “new” materials like plywood. Some of this is blatantly obvious and intentional (think Eames chair), but I think a lot of Mid Mod designs would have self destructed if built with solid wood…

I did a test burn last night of the image going onto the cutting board. The burn shaded in some of the design that was supposed to be an outline. This morning I figured out why, so the final burn will look better.

I used a cutting board from Ikea that was similar in size to my burn area. When it was done, I gave it a light sanding with 220, oiled it with some butcher block oil, then gave it to my neighbor in thanks for watching our house last weekend.

This was burned at 10mm/sec 90% power with a .3mm stepover at 45*.
The final burn will be the same speed and stepover, but I’m going to do a crosshatch so that it burns at 45* from both sides. 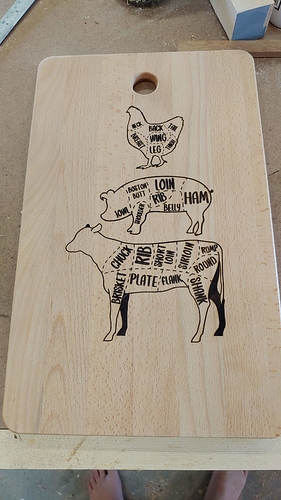 Couple more coats of oil and this is done. 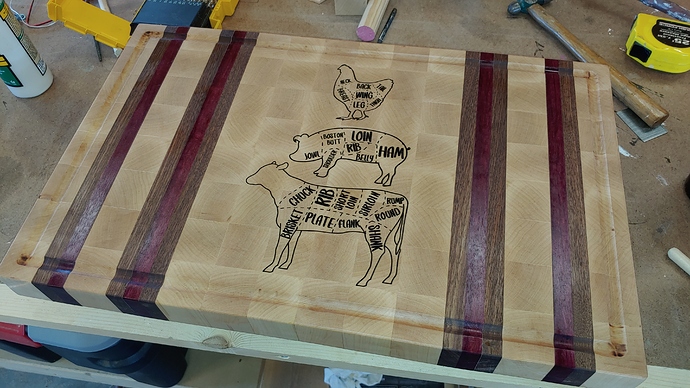