I have this machine 99% done, and have few a while now. As I keep test fitting and minor tweaking the parts I can’t help but hate how the fasteners looks. The rest of the non-fastener hardware parts are silver mostly.

-Seems like black cap screws wouldn’t do much but camouflage them a bit. Although red anodized would be killer.

-Make a 3D printed cover for the screw heads that gets stuck on? 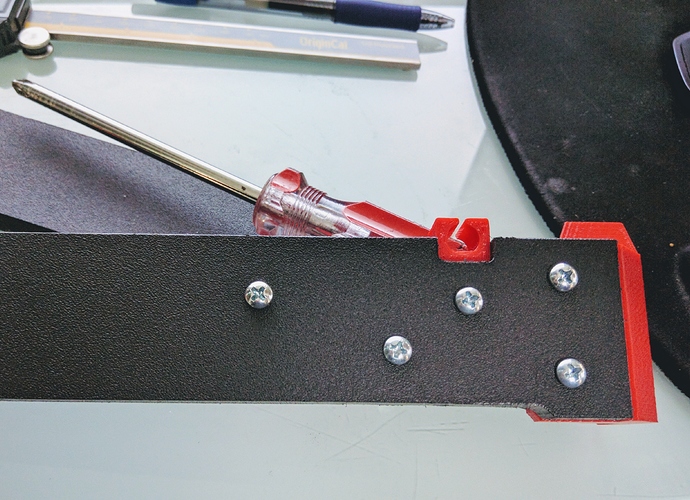 I think you covered the options… My first thought was countersink. It’s not as strong though.

What about just a different screw? Something in a harder stainless? Maybe the ones that have cylinders for heads, but still Phillips? I think I got some good looking screws at Ace.

Cam you twist them so they are all an ‘x’?

What about adding a bunch more screws so they spell out your name? It kind of looks close to the big Dipper. I’m out of ideas.

I still think countersunk, at least for the show version. Mine is still unpainted MDF…

Such little details I just want to use it already.

I really wanted 3/8" MDF but there is not any to be found in my neck of the woods, 3/8" StarBoard really isn’t much more rigid than 1/4" MDF. The design will allow for 1/2" though, but dang that would be a beefy monster. 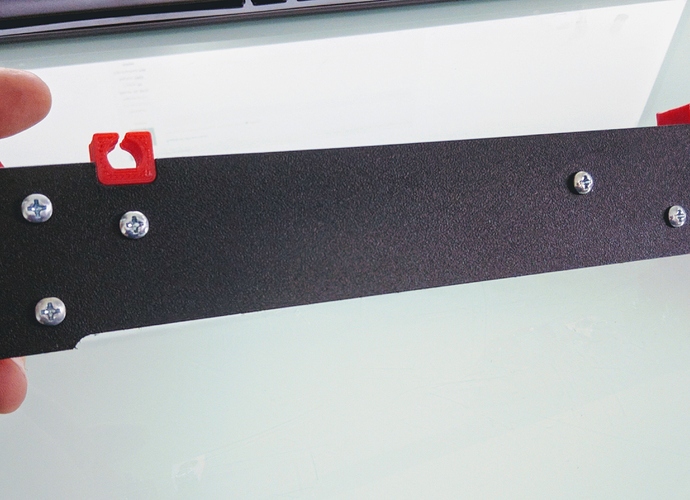 Is there a woodworking store near you? There are many more choices at Austin Hardwoods in Denver vs. Lowes Depot.

I switched that piece specifically out for 1/2" and I think it’s much more rigid. The Y is much quieter with that, at least.

I have checked two lumber suppliers and 3 different hardware stores, no 3/8".

I did get some other screws though, and will try counter sinking them as soon as the orders go out I will put up a pic I have a test piece I can screw up. I do think it looks a little better in the most recent pic with all the red on it. Maybe when the silver goes on it will be a little better still.

The new design deals with the Y axis Flex by fliping all the mounts so it can be made of material even thicker than before, offsetting the Y belt to the edge to minimize even more flex, and it can use the Y rods as a support if they are dimensioned well enough. Every single part has been tweaked, some a little and some a lot. I also swapped out the 608’s for toothed idlers.

Sounds very cool. I haven’t built a (whatever that is) since last Christmas.

What about a 3D printed part. Like a washer that connects the screws on each side. Some sort of abstract thing…Hmm. I will put it in CAD and see what it looks like.

I think counter sinking and flatheads would look better.

I was going to check but it got too late. I will though.

Well, I don’t like this either. Hexagons might be a bit better than circles but not enough.

It sucks it is only the front panel, all the rest are on printed parts and do not bug me at all. I think I am just being over sensitive. I will try the counter sink and move on one way or another.

Nice find Andy, I do like them but DANG $7.17 Each (plus shipping). My closest hardware store has regular black hex heads for $0.69 each but I would have to get a ton to get them from my supplier. Regular screws are only like $0.02 from them but at about 5k qty per box.

are you looking at 1" 6-32? That’s for a 10 pack…about .72 each. I bet they can be found elsewhere online, mcmaster is just where i order a lot from for convenience.

Socket caps are much sexier than button head Phillips. Countersink would be great but extra work and not “practical” in any means besides aesthetics.

I have this machine 99% done, and have few a while now. As I keep test fitting and minor tweaking the parts I can’t help but hate how the fasteners looks. The rest of the non-fastener hardware parts are silver mostly. -Seems like black cap screws wouldn’t do much but camouflage them a bit. Although red anodized would be killer. -A complete design change sounds like a bummer. -Maybe counter sink the screw heads? -Make a 3D printed cover for the screw heads that gets stuck on? Any ideas?

Somewhat related - If you’re not familiar with them, you might want to check out Bowlin Equipment Supply on 10th near Harrison in Berkeley. Years ago when I worked at the then nearby North Face Factory they were the only game in town for metric or unusual hardware. I found them very helpful back then - I hear they still are.

Sweet I will go check them out, I was over there twice last month, North Face clearance and a friend was getting restaurant equipment.

These kind of screws usually look nice. I tend to use them whenever I cannot countersink:

If you can countersink them, then don’t use the washer and only use these screws, they look great on all projects. Phillips head always look kinda cheap.

Dang it I forgot to look at the counter sink While I was getting dirty earlier… Shoot. Busy days.