Different problems on the three axes (including the Z buzz / dive)

Sigh. X/Y movements work great now that all motors are actually running. But I still have a Z problem, it turns out. I edited my gcode so that the Z movements are always at speed 180 (3 mm/s), so everything was nice and slow. It worked well at first, but eventually it wasn’t able to move up from the piece to the clearance plane, so it was moving around very close to the piece, then it missed another upward motion, and started going deeper into the piece as a result. I stopped it and tried to use manual control to bring it up, and it wouldn’t move - it just did more of the buzzing. I took a video of trying it a few times:

Toward the end of the video I move it downward a small amount, then try to move it up again. It goes back to the stuck position and resumes the buzzing.

After I stopped taking video, I lifted the spindle manually while I did the Z-up command in RepetierHost. Finally it did move, and then was able to move up and down freely.

Has anyone seen this? Anything I’m missing that would cause it?

Have you tried to move the Z motor with it removed from the machine? I would guess there is binding somewhere. I had Z issues at first until I put a bunch of grease on the threaded rod.

Thanks Matt, I’ll try that.

I’ll still try adding grease to the threaded rod, but as a first step I tried loosening my anti-backlash nut. At least, I think that’s what I loosened - the one on the bottom of the 5" bolt in the middle assembly? That seemed to work, and I did a successful carve of a design from Vectorink.com.

P.S. @vicious1 I just noticed you revamped the assembly instructions. They look awesome!

Thanks I’m finally have most of the info now, I just try in fill in any missing details when I get questions about a step.

As for your z axis, 3 things to try. It really sounds like you have some binding, double check the rod, maybe clean and re lube it. You can flash my new firmware it has a slower z acceleration (same max speed for now), and you can also turn up the z driver to .7V.

Hey, just wanted to say thanks. I had the exact same problem with my Z. Changed the voltage to 0.7 and it works fine now !
Just a quick question which I couldn’t find an answer to. Is there a way to make the auto home command go to the home that is set when pressing set home offsets ? Is there a way to hard code 0,0,0 to a particular position without end stops (Im guessing no here)?

Not easily from the screen. You can send a command from repetier or another software to go to position, 0,0,0…

Just wanted to say thanks again to everyone. I think my Z problem was indeed the anti-backlash nut being too tight, but I lubed the threaded rod anyway and another test carve went perfectly.

I’m having some similar Z problems and I’m trying to follow your suggestions:

I’ve flashed my firmware to drop the Z acceleration value from 55 to 35. I have also reduced the Z speed for the tools in Estlcam to 1mm/s. There are a few places in Estlcam’s generated g-code that ignore this value, so I’ve manually edited the g-code to reduce F values even further where necessary to not exceed 1mm/s Z axis travel. Given the max value you suggest at 6.7mm/s I am assuming this is slow enough. These have improved my results, but not eliminated the issue.

“double check the rod, maybe clean and re lube it.”

I have completed this step. As far as I can tell the rod is straight, the coupling appears to be fine, and without power to the motor it turns very freely. I’ve had to leave the nut assembly fairly loose which I’m hoping won’t cause its own issues. I have not tested this to see if it resolves the issue because I would like to also attempt the third suggestion:

Here I have run into problems. Following the Pololu video linked in the RAMPS instruction page I have attempted to determine the currently selected voltage. However, my multimeter is reading 4.3v between the pot and the vref pin, which is very far away from 0.7v. Advice on this point would be much appreciated. Thanks!

So this happened after upping the voltage to 0.7 on the Z axis !
CNC was running fine then there was a big pop and the cable going in to the power supply was on fire !

Coincidence that Id upped the voltage ? It seems like such a small increase in power, surely it wouldnt cause this ?

Any thoughts welcome. Ive since replaced the cable and run the CNC briefly without issue. 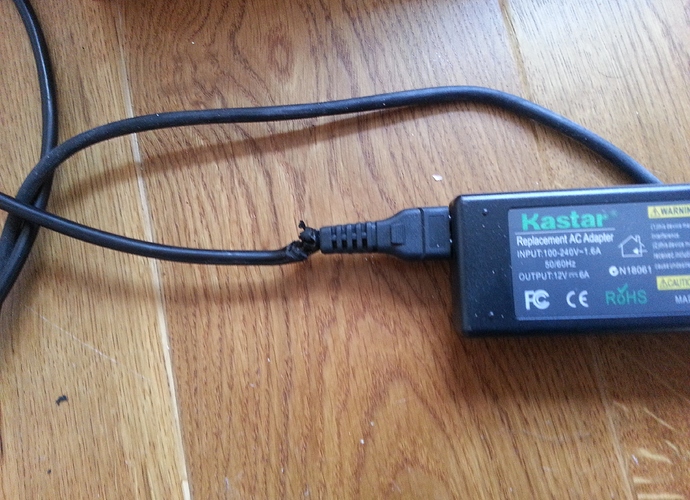 No there must have been a crappy connection right there, bent to many times, something. That had to scare you a bit.

@John How tight is your anti-backlash nut (this one that goes into the middle of the bottom of the middle assembly https://www.v1engineering.com/wp-content/uploads/2015/07/IMG_20160527_12563801.jpg )? Is that what you’re talking about when you say “I’ve had to leave the nut assembly fairly loose”?

My Z buzz stopped after I loosened it. At that point I had tried the firmware flash, but I hadn’t yet tried lubing the rod and I never adjusted the Z voltage.

@Bradley thanks for the reply. That’s unfortunately the newer middle assembly than the one I’ve got. Mine is the original modified with “better middle Z” as I recall. All of the z nut stuff is in a single piece with a spring in the middle.

Is your threaded rod centered in the hole all the way down? the spacer and the nut lock can get off center and pinch the rod?

Centered in the z nut assembly thing? As far as I can tell yes. I only put one screw in it so it could pivot if it wasn’t perfectly straight. During z travel it doesn’t visibly move around.

My test cuts today seemed to work out ok but they weren’t very involved. I’d still like some clarification on how to adjust the voltage for the z stepper. 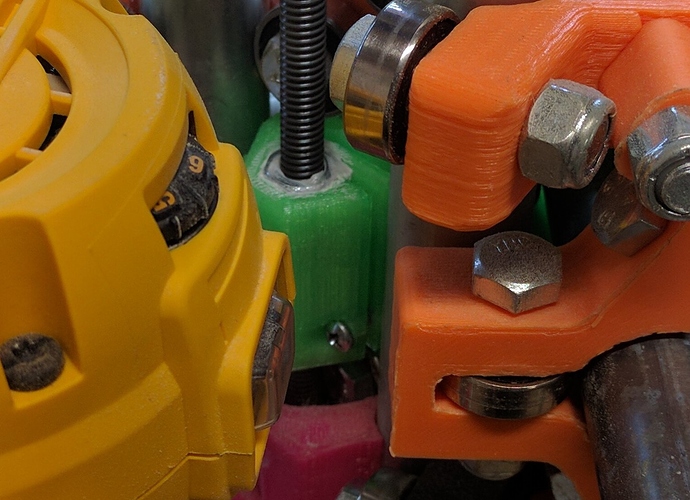 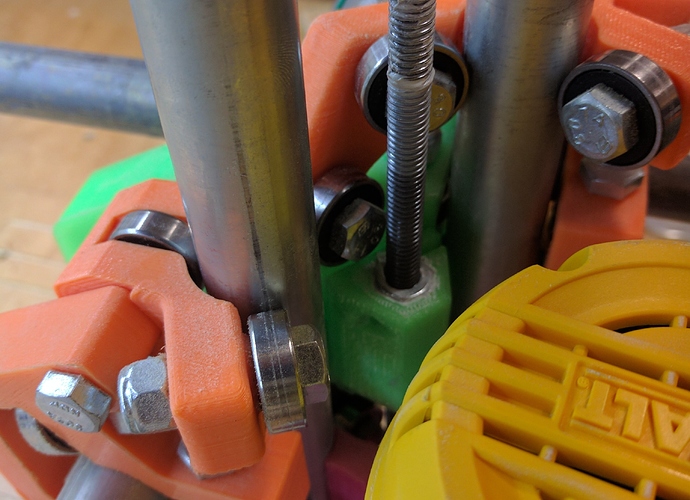 Oh the old style. Take off the spring and small nut, That tends to be everyone issue. If you don’t have them in there you do not have the coupler seated all the way. You are also using a larger spindle than most of us so you will need to turn your acceleration down on your z axis in the firmware, try 30.

How to adjust your drivers from the instructions page, https://www.v1engineering.com/assembly/ramps-wiring/

If you are using the drv8825 you want to set them no higher than .7v unless you have a fan on them, and set the voltage at 90% of half the steppers rated amps. If you are using all my stuff .7 on all of them is good.

I am using everything from you, but when I try to follow the instructions in the video the voltage reading on my multimeter is 4.3v before I’ve modified anything. That’s what I’m stuck on. My acceleration is currently down to 35; I’ll further decrease it to 30. Taking out the smaller nut and the spring seems like an odd thing to do, but if you think it’ll help I’ll give it a shot.

Not many people seemed to be able to get the adjustment right so I took the anti backlash out of the new design.

You are not reading the voltage right. Measure from the metal pot itself to the ground, it cannot go over 1.6v so you are on the wrong thing. This could be your problem, to much and it will over heat, to little and no power. Very precise adjustment.

> Measure from the metal pot itself to the ground

I am measuring from the pot itself to the vref pin described in the video, labelled on the board as M3. I will try measuring to GND instead. Thanks for the clarification.