drills cut only orizontally...how set them?

Hi everyone,
I saw that commercially sell the drills that can not mill the material vertically, but only horizontally …
In that case, how and where should I set this detail in ESTLcam?

(I’m performing various tests before you buy it, so I also wanted to understand this peculiarity)

This is an example to explain

If I wanted to cut a square panel with all the beveled sides … I can not sink into the panel with the router directly … but I have to get in the side … I would like to understand this: D

You’re saying you want to cut with something like a dovetail bit and control where the MPCNC does its plunge. I’m not sure how to do that in EstlCAM.

I think I could get it to do a through dovetail, exactly the size of the bit. I would set the max tool depth per pass to be the depth of the dovetail, and then set up a line that didn’t start or stop in the material, and then I would choose an engrave path. That would be a tough operation, so you’d have to get the speed just right, to not burn the material, and not get stuck in it either. Also, any variation in z is going to be a bigger mistake than on most cuts.

Having a dovetail that is larger than the bit has its own challenges, because the pocketing is done along x, and if the pocket is in a non-standard orientation, then estlcam could decide to do it in pieces, each piece requiring another plunge.

Having a blind dovetail would also be a challenge, because it would have to retract along the same path that it just cut.

Hopefully, there’s a feature I just don’t know about that would make all this easier. If I needed something like that, I would consider just making a square cut, and following it up with a handheld router with a dovetail bit in it. I wouldn’t want to do that for 100x for something, but I’ll probably only need to do that once.

edited cause I thought of how it could be done…

You can set where you want a cut to start (i saw it when doing engraving for the vinyl cutter), with a lead in.

tell it that you want an engraving that is the depth you want your cut to be, with that as the stepdown as well so it would just straight to it.
engraving has the option for a lead-in, so you could tell it to start at the end, and lead-into the start from outside the workpiece.

In fusion you can do a ‘slot cut’ and/or tell it the entry points and predrill points. (this is how I’m cutting my t-slots in my spoil board tomorrow)

it is possible with the “lead in” function. 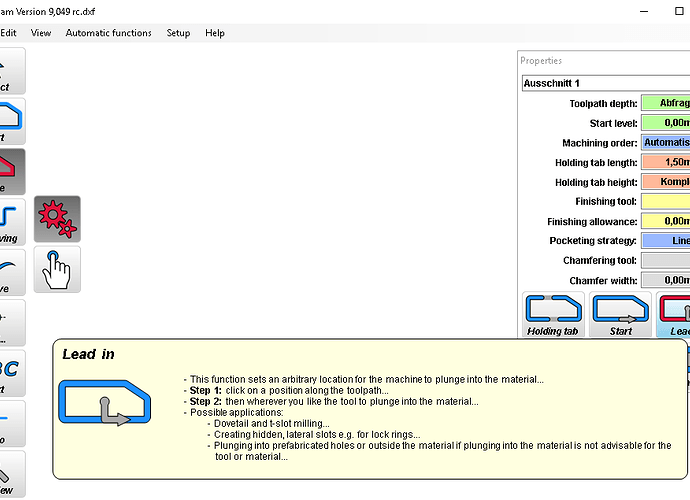