Wanting to build a drop table and was wondering if anyone could point me in the right direction. I found an old table saw on the side of the road and was going to use the motor for a diy lathe. Wanted to maybe use the rest of the assembly to build some kind of simple drop table, but cant really visualize making a 2’x2’ table drop evenly with the table saw parts. Anyone have any pointers or even just an “it won’t work”?

Dui’s build is the one that comes to mind. There was another one with a slide out slot for doing CNC on the end of a board. Those are the two examples I remember from here. Dui’s was basically 4 posts, with a shelf that attached to each post with a bolt. There were several heights drilled for the bolts so you could raise or lower the shelf.

I’m not sure how the table saw helps, except giving you a flat (if not too tall) surface to start on. I guess maybe I’m in the same boat as you, I can’t see it.

I want to see your progress on the DIY lathe though, please share that when you get to it.

Stepper motors driving screws on the four corners to raise or lower it ought to work.

Stepper motors driving screws on the four corners to raise or lower it ought to work.

Was looking for something a little more “manual”. Going to try and finish the lathe portion of my project this weekend and then move on to the drop table.

At the and if the day, I’m not trying to buy more parts of I can make things work with what I have

@jeffeb3 I brainstormed this contraption while bouncing around airports this last week, so I haven’t had time to actually build it. I got the unistrut idea from suggesting it to someone else to use as a frame for their mpcnc.

The only thing that scares me is jamming a chisel into material that is going to be spinning REALLY fast. I don’t know all of the terminology for parts of a lathe hence “shackle” in my drawing, but hope to round up the parts this week and have it built by Sunday…

Edit: forget to spell check before I hit submit 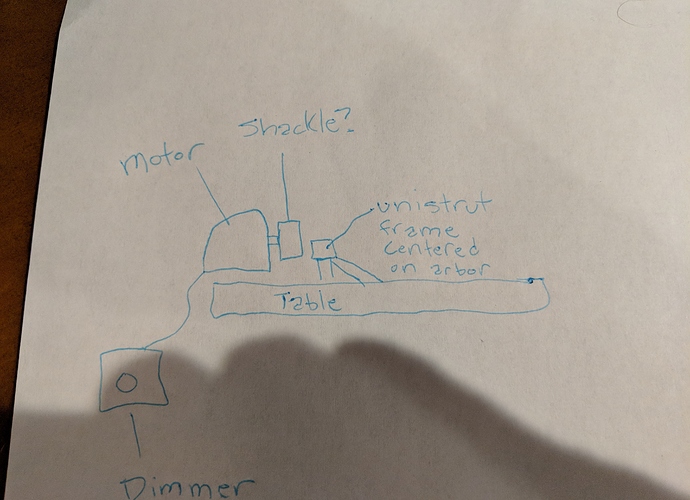 Bring able to really slow it down would be nice. So you could give it a try without 1750rpms.

I think the shackle is called a chuck. I think you also need a tool rest, so if the chisel bites, you’ll have enough strength to break the material instead of throwing your arm into the spinning thing.

Is the unistrut the tool rest or the “dead end” to support the work?

I am not 100%, but I think the reason they usually use belts is to have somewhere that it can slip, in case it binds. Or maybe it gives you a ratio.

I don’t know much and I’m totally jealous. I’ve wanted a turning lathe for a while, but I haven’t been able to justify the cost without some kind of project. I’ve been thinking I should try converting my drill press into a mini lathe.

The unistrut was going to be the tool rest, the belt comment really has me rethinking my project though. I’m wondering if I could get the clutch/chuck out of the pile of burnt out cordless drills that I have. I’m also wondering if I could 3D print something that could hold up to the forces involved, my neighbor has a bunch of old trucks on his property…maybe he’ll let me pilfer a belt.

The only reason I’m even attempting this is because I found an old table saw on the side of the road, the only thing it was missing was an arbor nut which was an easy fix lol.

The “dead end” was going to be the shackle/chuck. I’m going down the rabbit hole now though…

the belt comment really has me rethinking my project though

I was afraid of that. Don’t listen to me. I don’t know what I’m talking about.

Mathias wandel has a homemade lathe. I don’t remember what kind of chuck he used.

Didn’t the table saw have a belt?

Use EMT conduit on the 4 corners in a vertical orientation. 3d print 4 of the x or y rollers from the MPCNC kit. Find some way of mounting the 4 corners of the table to the rollers (maybe something with conduit going from corner to corner and mount the table top to the conduit. Now you have the table so it can roll up and down.

My idea for adjusting the height was to use a lead screw with it bolted to the table top. Make/3d print a handle for the top of the lead screw to manually turn it. You could use 4 leadscrews one on each side and a big belt under the table to turn them all at the same time.

I think I have enough leftover parts to actually make one. My problem is I invested a lot of time into my MPCNC table and don’t really want to redo it.

I’ve been working on an MPCNC lathe (in my head since I can’t actually get into the garage to muck with hardware) for a while now. My plans involve a 12"x48" MPCNC frame to give the X Axis, a Z axis that sits sideways to hold the tool and move it in and out and an extruder axis that moves the live center in and out. Designs are created to do 2.5D with no Y (1.5D?) and the live center is positioned ‘manually’ through Repetier-Host. Motor needs speed control and a set of step down pulleys to provide as slow as possible speed while still able to spin at 2k RPM or so. Chuck needs to be mounted on a shaft that has the largest pulley balanced on the other side. Motor needs to be mounted either on a pivot or with a belt tensioner. Nice to have is stepper control of the motor to allow for tapping interior threads on a piece.

My hope is to be able to work on pool cues…

This is a bottom the table saw guts that I plan on using for my projects.

At the top of the picture(the threaded rod and sqaure that the motor is mounted to) are the pieces I want to try and use for the drop table. It looks like I might be able to either bolt or weld arms to in order to mount a table/spoil board to. The raising and lowering looks pretty straight forward. I’m going to try and disassemble the part that makes the blade tilt as it won’t be needed.

As far as the lathe parts. I’ve looked at some pictures of diy ones and some of them are belt driven so like still going to look into that. I’m also worried that a dimmer switch won’t be able to handle the draw of the motor 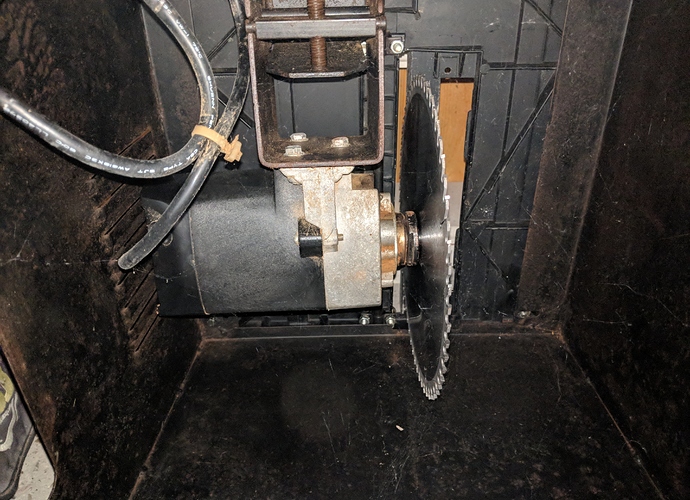 I’ve been trying to upload the picture, but can’t. I’ll try again later.

You can check here my drop table solution if you want:

It works well, I just wish I’d have some kind of pulley system to adjust it faster than having to set all four corners to the exact height each time. I have a plan for doing that but I keep procrastinating…

It works well, I just wish I’d have some kind of pulley system to adjust it faster than having to set all four corners to the exact height each time. I have a plan for doing that but I keep procrastinating…

I’m definitely going to integrate your design into what I’m trying. I built my table out of steel stud, so I should be able just use a unibit to punch holes and run longer legs. I’m going to see if I can Mickey mouse some arms out of more stud to attach the legs to the crank from the table saw.

Hoping to have it done by Sunday, but we’ll see how the weekend treats me…

rwallace (Ryan) September 2, 2018, 8:15am #15
Hi guys, this thread gave me an idea for a for a simple Z height adjustment mechanism. I haven't actually built this yet so I have no idea if it would really work or not.
You would extend the Z tubes down through the bottom of the table (like Dui's design) and put a pulley on the bottom of each tube. You could then Loop clothesline cable down around the the pulley on the bottom of the tubes, up through another pulley and over to a spindle in the center of the table. A crank would be attached to the spindle so you could wind in the cable which would push the Z tubes up. It would not be very accurate, but the idea is you would loosen the Z supports, crank everything up past the height you want, then lower it back down to rest on height guides to give a accurate height. Then you tighten the z supports back down at the new height.
What do you think? crazy or workable? 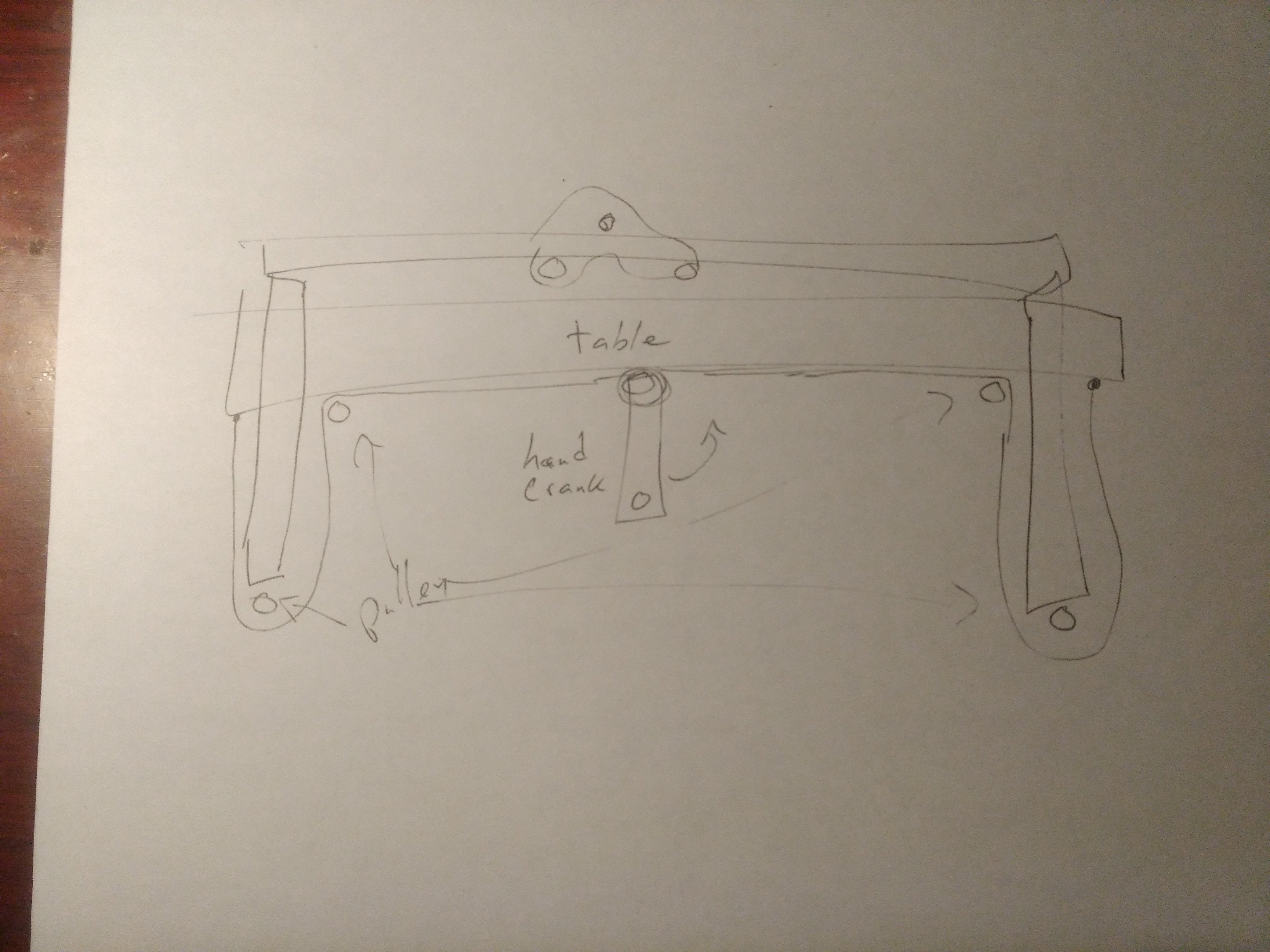 Back to the tablesaw/lathe. Are you building it to use as a wood lathe? If so, go to a Woodcraft or Rockler and examine one first hand. You can also ask the people that work there for advice although I imagine they would steer you away from building your own. Barring that, research wood lathes online. That being said, important things to remember are

NEVER stand in line with the stock when you first start it up. If the stock comes loose you dont want it coming at you.

Start with the low speed until you have trued up your stock, then you can increase your speed.

keep a low speed grinder next to the lathe to sharpen your tools. I usually leave mine running when I amusing my lathe. Your tools will get dulled quickly.

What do you think? crazy or workable?

You’d really have to tune it to get it to pull on each corner the same. If you had too much difference, it would rack. You’re right too that it wouldn’t be accurate enough to leave as the only support, but if you had pins or clamps after you moved it to actuaoly keep things in place, then you’re looking at this just to move the table up or down between pins. I guess then the question is about value. If it helps you enough to do just lift and lower the whole thing, then it might be worth it.

I heard homemade lathe… Has yous guys looked at the concrete lathe? Its really powerful and pretty cheap. Also really heavy, but it’s a good thing…

Mpcnc or lowrider would really be useful here in making the forms. Hopefully some one finds this important enough and makes there forms available to all.