So, this seems to actually work ok. I’m doing my thing again, duct taping stuff I have laying around, lol.
I’m using smaller hoses and positioning them off to the side where I have some space that I’ve already given up. The combined cross sectional area is smaller than the 3 inch duct I’ve got there, so I’m thinking of adding a 3rd in front of the router, which might only cost me another 1/4 inch. I’ve already given that up for homing, and usually set my origin to (1/4, 1/4) anyway, so I’ll just have to move the hose while homing.
Right now, you can see it zipped to the bottom of the core and around the z tubes right at the top of the core, where there won’t be any significant leverage (just testing, anyway). The main hose is zipped to a truck. I was thinking this would be temporary, and eventually suspended from the ceiling. I’m in a short term rental right now though and trying to create as few holes to fix when we move out as possible. This worked well enough that I might just move it to the rear of the table, though.
The main idea is to cut a plate the shape of the core and screw it to the bottom through the provided holes (thanks for those @vicious1) . It would have holes for the hoses to drop through, so I could easily pull them out when i need access to the router. The upper zip ties will be replaced by brackets that screw to the core clamps. 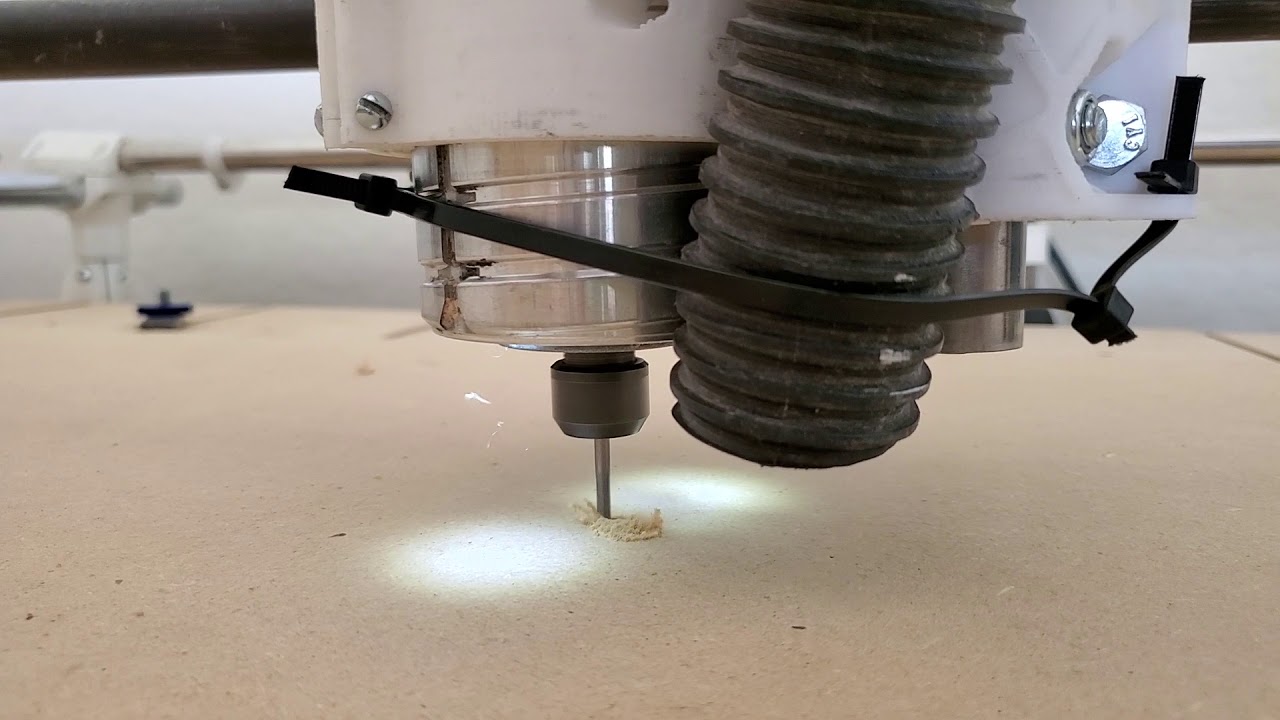 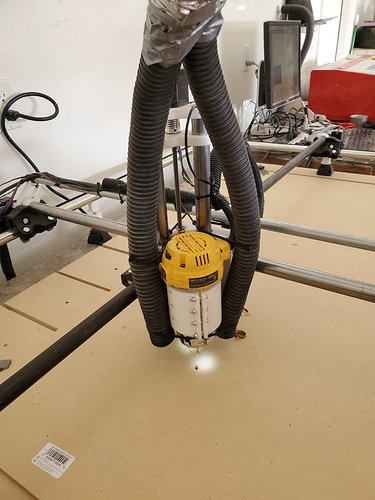 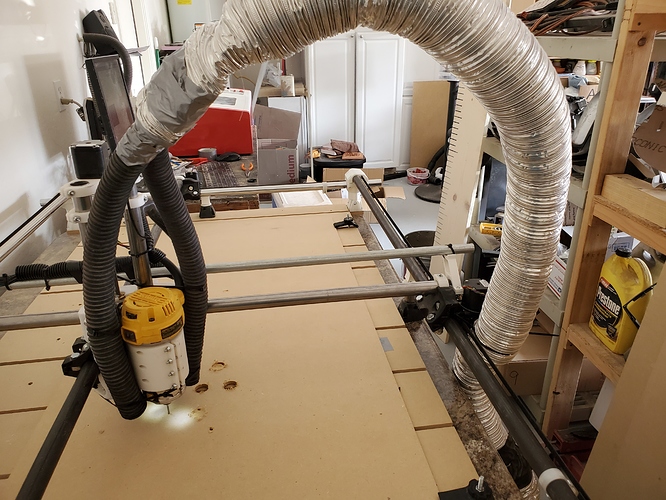 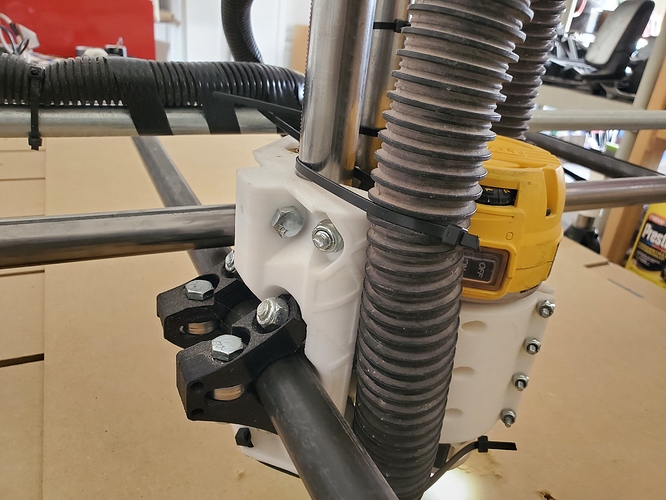 And here is the result. You can see the larger particles escaped to some extent (a lot of them would get picked up on a subsequent pass), but looking to the edge of the table at the right, there is practically no new dust. Most of the light stuff is getting picked up. You can see a streak of mixed dust, and that was actually blown under the stock and out the t track by the dewalt. I’d really like to send that air somewhere else, but I’m just not comfortable redirecting it. The 611 is relatively short term, anyway, and the 660 will be back at some point.
I think a lot of the heavier stuff that escaped would be picked up by a 3rd hose. 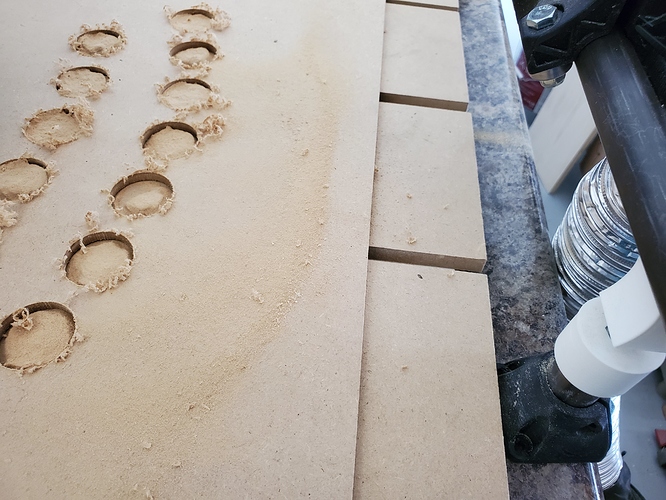 Lots of smart people here, and I’m sure I’ve missed or not considered something, so feel free to chime in. I probably won’t start sketching anything up until next weekend.

I just watched Apollo 13 the other day. Your fix looks similar to the Carbon block issue

Love me some duct tape!

No shoes, we be barefootin’!


I’ve been playing around with a core mounted dust solution. Feel free to modify it to suit your needs. The step file is on thingiverse. If you do come up with something, please remix it on thingiverse / add it to the post.
turbomacncheese (Tony) November 19, 2020, 8:48pm #6 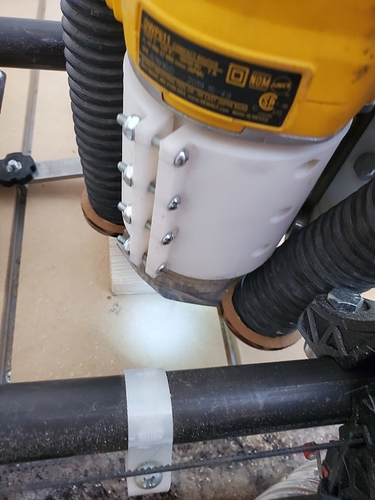 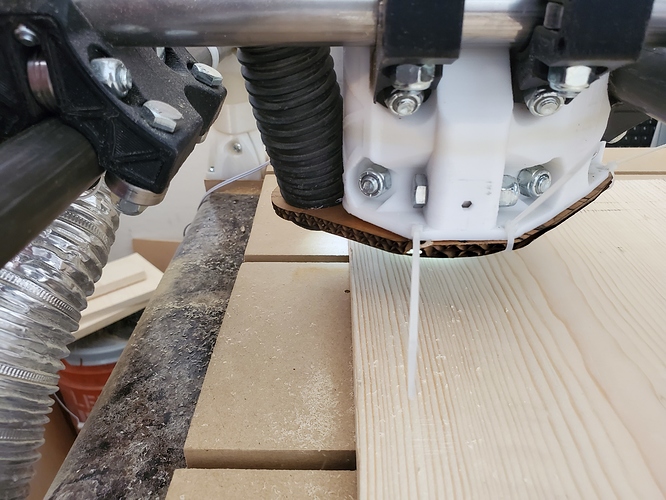 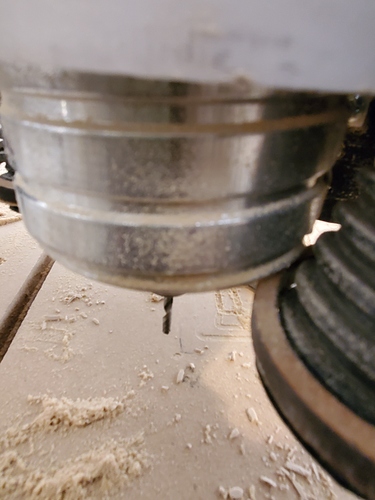 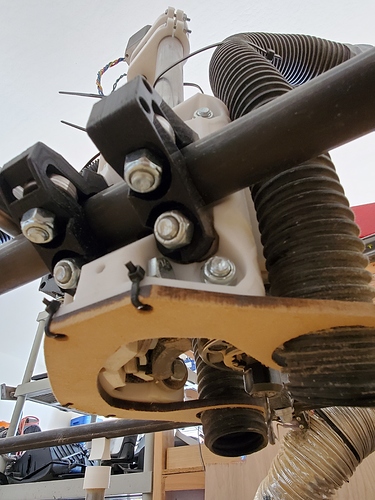 I’ve been working on this, on my machine. Similar design, but with straight tubes instead of flexible. 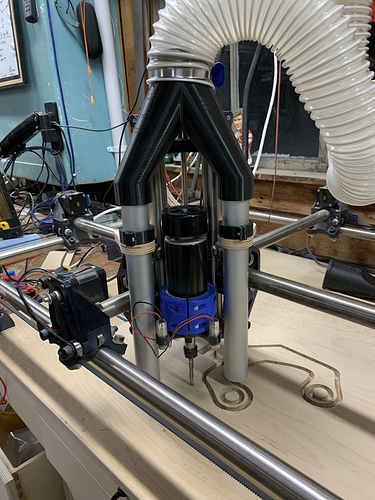 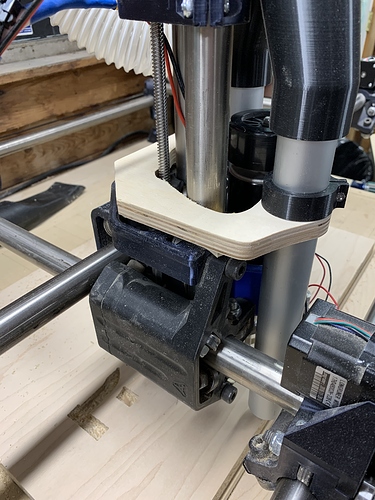 Even without any kind of boot at the bottom, it does a pretty good job of cleaning up on plywood cuts. Haven’t tried MDF yet. But working on the boot design as well.

Great minds and all that! I cut a bunch of mdf and a little plywood with my cardboard piece and I’m pretty pleased with it.