I’m teaching my wife some of the steps for making boards like these. (About 20 minutes to flatten each side.)

After trimming but without oil: 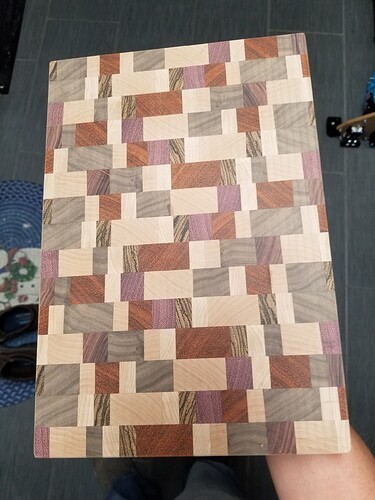 I still love the dovetail bit.

I wish I was able to buy that many different woods in Germany.

I’d give a lot for maple, purple heart and walnut.

Nice, I like how you acheived a random look using only 3 glue up patterns. It went together nicely too. My table saw is too cheap old and janky to get good joints like that. Did you use the cnc for all of the cuts, or did you use a table saw for some of it?

My table saw is also relatively poor at creating straight, square cuts, and my thickness planer was essential to get smooth surfaces for gluing. The downsides are snipe, and it only makes consistent thickness, not flatness, and I had some curved segments that I had to decide what to do with.

I would like to figure out how to get something that performs like a jointer, without having to get a nicer table saw. I’ve seen a couple builds using a hand planer, which look promising. Specifically, this is for the strips prior to the first glue-up, to clean up the surfaces to be glued.

After the first glue-up, the thickness planer cleans up the faces. The table-saw cross-cuts prior to the second glue-up don’t have to be great because the final CNC surfacing cleans up any unevenness and burn marks.

After the second glue-up, I used a band saw in this case because it was too long for my table saw sled, and the long edges were too uneven to use the table saw fence. The band saw also avoided the burn marks that I would have gotten, but it was hard to keep those long edges straight. Again a jointer would be nice for cleaning up after the band saw cut.