i am confused about marlin and estlcam. I can generate a marlin gcode file and send it to my mpcnc with pronterface. it seems i can also connect the Mpcnc directly to eastlcam. However that warns me about possible damage etc. Which way is it meant to be used?

thanks, and apologies if it is obvious, I am a real newbie in this space.

If it can’t restore the original firmware what is this button for Jeff? 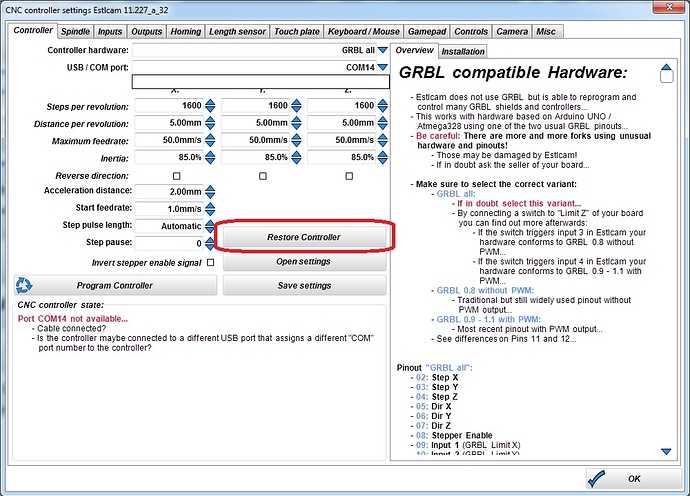 Fact is it can restore the original firmware, at least it claims it can. I must admit it didn’t work for me ages ago when I tried it, but that is obviously meant to be the function of that button.

So David, most people on this site only use EstlCam to generate the gcode into a file, they then use a different CAM program to send that file to the CNC. EstlCam has the ability to control the 328p processor in your RAMPS/Arduino directly but it has to reprogram your Arduino in order to do so. EstlCam has two different pinouts for the Arduino also which allows you to use either a CNCshield/Uno OR any 328p board that is specifically built for use with EstlCam… like the ones from Arduinoclub.
If you decide to go down the ‘using EstlCam as the CAM software’ route carefully check the pinouts that EstlCam give you are correct for your RAMPS board (look under Arduino Mega in CNC Controller Settings).
If EstlCam has re-programmed your Mega you can simply re-flash it with whatever flavour of Marlin (or GRBL) that you like…it’s no biggie!

EDIT… Ahh…maybe EstlCam can’t restore Marlin, only GRBL…is that what you meant Jeff?

That seems promising. It is certainly possible, but I don’t see anywhere that you save the controller firmware, just the settings. I would be careful attributing what you expect to happen to an undocumented button. It may do what you say, but when does it store the firmware for later restoring? When you hit the program button? What if you program it twice? What if it only saves and restores the settings and not the firmware itself?

You may be right. But it is far from a sure thing.

The ‘Restore Controller’ button that I high lighted “Restores the controller to the state before being used by EstlCam” - it says that in the help file for that button, there are two other buttons for saving and loading the settings you have made within EstlCam. Surely any settings you have saved (except eeprom settings) within Marlin will be written to the firmware and therefore saved when the Program controller’ is pressed and restored to your controller board with the ‘Restore Controller’ button.
But yes…I agree…some un-answered questions, however, not exactly a deal stopper if you have to re-program your controller outside of EstlCam is it…you wont get far in this game without having to re flash something!

anyway…has any of this helped you David?

many thanks, i now understand the choices but need to decide on trade offs. I like the VI modified marlin double end stops to square things and not sure estlcam has this, on the other side i like the estlcam sensing to locate origin and alignment and integration.