1.) I bought everything from here, but my issue is a change I attempted to make that altered firmware.
MPCNC kit with a mini Rambo added on
2.) No end stops
3.) PC
4.) Picture here

So, I built my machine and got it up and working. After which, I attempted to use Estlcam as a control software. I wound up reprogramming the board under Estlcam. After I did this, the motors began whining and heating up. Also, the board itself heated up so it burned slightly when touched. The red LED light came on as well. I disconnected everything and attempted to refresh the board with Marlin firmware according to the process Ryan listed out on the website. However, I have been having some issues.

Any thoughts fellas? It looks like I wiped the board, but by all appearances in Repetier I was able to reflash the board ( when reading printer info within Repetier Host it reads the board as having Marlin firmware). Is it possible I fried the board?

Does anyone else who has encountered this issue with Estlcam have any advice?

Cheers and thanks in advance for your advice and patience. 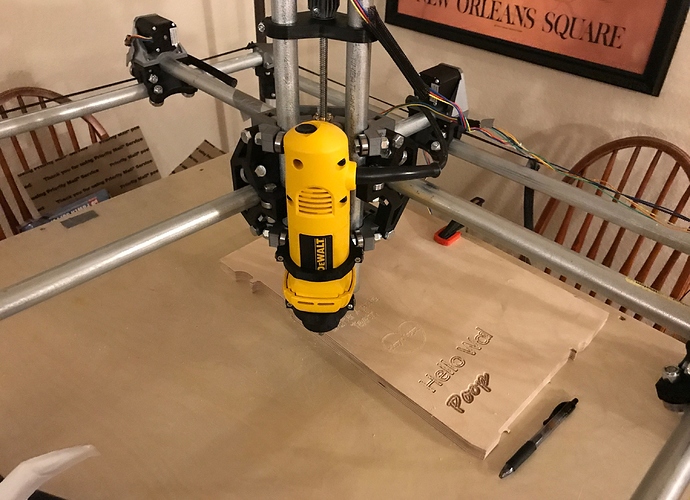 Now that I have seen the pictures, This is the file you should have flashed, https://www.v1engineering.com/wp-content/uploads/2017/05/MPCNC511MRAmbo_GLCD_T8.zip , and you made it pretty tall rember to lower your feedrates acrodigly when it gets to that point.

Are your certain this is the one you flashed, with the usb plugged in and the power cord while flashing? If you got any errors other than the bootloader errors chances are really good it did not flash.

It is pretty hard to kill a rambo, no one has done it yet on this site, but…

You flashed it through estlcam? Does EstlCAM support the rambo? I know it supported the ramps, but…

It is pretty hard to kill a rambo

I don’t think the Estlcam firmware thing does any sanity checks, I think it might just push the code to any arduino. I get a bunch of emails about this sort of thing. First with a rambo though.

Alright, sweet; I am away for a couple of days, so I’ll try it when I get back. Post an update of what happens. Thanks!

Update: Ryan’s solution worked exactly as intended. Everything is back to normal, and red LED is off. Thanks!

Sweet, So you’re up and running now?