I’m running a Primo 25mm with a 580x550mm bed. My first project (to learn fusion 360 and how to machine, etc) is a storage box made of 15mm plywood with finger joints all-round.

I put pockets in the inside of the box to reduce weight, but mainly because I can and hadn’t done it before.

However, I’ve had some electrical issues and during the pocket clearing my z-stepper motor disengaged and the spindle plowed through making a large (80mm) round hole. To give symmetry to the side, I made 2 inlays and the first thing that came to mind for a circular plug was a planet. Tried to match the colours a little with the wood stock I have - Mars is Jarrah and Saturn is New Guinea rosewood with pine rings.

The perspective distorts the shape and I still have to sand them flush, but it came out well.

Software used was Fusion 360 which is not as intuitive as Estlcam but worked well. 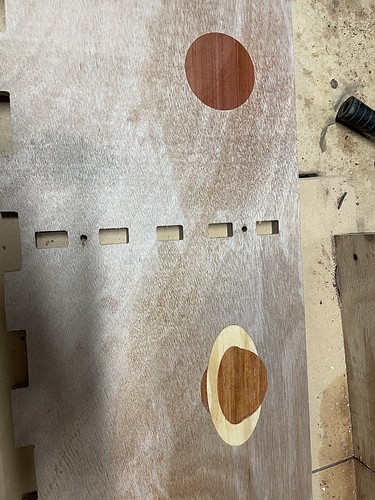 If you haven’t said it was a malfunction I would have never known. Nice work and good thinking!

My first project (to learn fusion 360 and how to machine, etc)

Well learn it you have! I think inlays are about as hard as machining gets, Everything has to be very precise. Your CAD, your build, and your cam, and your mistake recovery all seem perfect. Nice work.

Thank you all. The learning curve is steep, but climbing it gives a better view of the possibilities.