… and other innuendos to make people laugh …

Anyone following my other posts know that I finally acquired a planer. I started a new project over the weekend and decided I’d try my hand and finishing my own lumber. I bought a piece of padauk that was 8/4 x 8.34" x 13’ long. I only need about 6’ of it, but the price was right.

This post is going to be pretty detailed. I really hope someone new to using rough lumber can learn from at least one of my many, many, mistakes. In the end, I ended up with a really nice sanded product.

A few notes about the project

I started the project Friday night with cutting the board into workable lengths and then ripping the 8/4 lumber in half, giving me two 1" think rough-sawn boards... This was not an easy task. The first mistake I made was I didn't support the board properly when cutting the lengths. My circular saw kept binding at the end of the cut. It wasn't until the third cut that I realized what I was doing wrong. I simply put a piece of scrap under the board on each side of the cut. This allowed the cut piece to slightly fall away from the main board.

Next I took the 3 boards over to the bandsaw to rip in half. This is where I kicked myself… I forgot that my bandsaw only has a 6.25" throat. Makes it hard to cut a 8.75" wide board. Over to the table saw I go. I should have stopped at this point. The rough stock is rough on all 4 sides. I should have waited until after I built a jointer sled for the table saw, but I wasn’t thinking… I started to chop off one side of a board and the table saw is having the hardest time cutting through the 2" thick board. Smoke is billowing out the bottom of the board… horrible smells. I’m thinking I’m going to burn up the motor. So I lower the blade and cut half way through. Flip the board and cut the other side. That’s when it dawned on me that I still had a fine-tooth cross cut blade on the saw. Dummy. Grab the coarse blade for rip cuts and put it on the saw. Next two cuts just chewed through like butter. Then I cut them to width at just a hair under 6.25". The good news is, I was only wanting to get a 6" wide final board size, so this should still work. Take my now 6.25" boards back to the bandsaw, set it up for the first cut… and halfway through the cut the belt on the saw breaks. It’s an old saw, with a very old belt.

Walk inside the house and the wife (really have to love her sometimes) goes, “Done already?”… “Nope! Get the kids dressed, we’re going out to dinner.” Her: “oh, where?”. Me: “Someplace near harborfreight so I can buy a linked belt for the bandsaw.” Her: “o.O… oh.”

Get back from dinner… time to replace the belt. Use some penetrating fluid to loosen the tensioning bolt on the motor. Get the belt to the right length (took 3 tries)… go to tighten the tensioning bolt and find out it had stripped the threads when loosening it. Probably something to do with the 30 years of rust on the machine. Scratch my head for a few minutes… then I grab a clamp that has the ability to flip the one end into a spreader… throw it on the machine and spread the clamp until the belt is in tension. Finally get the three boards ripped in half, and that’s where I left the work Friday night. 6 boards sitting on the bench to air out until morning.

Saturday! This is the big day. Going to spend the day working on the desk.

But first I need to make some fixtures. I need two. I need a jointer sled for the planer as my jointer is only a 4". Then I need to make a tapering jig for the table saw so I can use it to make a jointed edge on long boards that are too long for the little 4" jointer… or so I thought. I later found out that my jointer does just fine with 26" long boards, but oh well. The jointer sled ended up being used to square up the laid up board later.

Building the two fixtures takes me over an hour. I’ve never used a wobble-blade on the table saw before. I used it to cut a groove in the tapering jig to embed T-slots into it. There is probably nothing more scary than running a wobble dado blade on a table saw, but I got my three grooves cut (after about 8 test cuts getting the blade set right).

I get the two fixtures built and start planing boards. I get two boards done and I’m not happy with the amount of snipe I’m getting, so I try to adjust the planer to reduce the snipe. I use a test piece of pine out of the scrap bucket and I’m happy with the snipe. I take my third board and run it through the planer… and there’s a weird groove running down the board. Huh… wonder what’s causing that. Pull the back off the planer and the blades are chipped… the silly test board I was using had a nail in it… grrrr… Off to the store I go… again. Bought new blades and back home I go.

Spend the next few hours planing and jointing boards until I ended up with 6 really nice boards… Ok… 5 really nice boards and 1 that was useable. I ran out of thickness before I could get one side perfectly smooth. For some reason out of all my band-saw rips, this board came out slightly off center with one board thicker than the other. The thinner one didn’t have enough thickness to make it perfectly flat AND smooth on both sides. I ended up with one very nice side and one side that will go on the bottom

Also, at some point during this process, I noticed one of the freshly planed and jointed boards had a nice twist to it when placed on the flat workbench. While reducing the snipe, I had someone introduced a twist. I adjust the planer again and the last two boards where flat again. Ugh. That will take more sanding later…

Pull out the router table to start cutting tongue and grooves (wife’s request) to lay up the panel. I mount the bit and cut a few test passes. Everything looks good, so I start cutting my boards. First board goes well… second board goes OK, but looks a little weird. Third board… and somethings wrong… The bit is somehow raising up in the chuck and isn’t cutting in the center anymore. Adjust the router table a bit and mess with it. Looks like the bit wasn’t firmly seated in the chuck so it wasn’t being gripped properly. Great. Set everything back up and cut the last two boards again. The groove is a little larger than the tongue, but these are the middle boards and you won’t be able to see the final joints. Might be a little less sturdy, but the two side pieces will tie everything together and help add strength.

Laid up the center pieces with some glue and that’s where I left it for the second day. Spent the next hour cleaning up because the wife wants her car in the garage… I ended up with more saw dust than my little shop vac could hold… really need to invest in a dust collector so I don’t have to sweep as much. And let’s not discuss the fine layer of dust on everything in the garage now…

Sunday rolls around and it’s out to the garage again.

First order of business is to sand down the panel to get rid of the small ridges do to the twist in some of the boards. Grab the random orbital and some 60 grit and go to down… A lot of sanding later and I have a smooth panel… on one side. Just do some rough sanding on the bottom, because, well, it’s the bottom. Was very happy I made an adapter to hook the shop vac up to the dust port on the RO.

Use the tapering jig to cut one side of the laid up panel and then use the table saw to cut it to width. Fire up the router table to cut the grooves on both sides for the side pieces… and I start pushing the panel through on the wrong side… Darn. I guess that’s now the back

Cut the two grooves on the RIGHT sides and then lay up the final panel.

Go swimming with the kids… take a nap… watch a little tv… and then head back out to the garage for more sanding on the final panel… 60 grit, 80 grit, 120 grit, and finally 220 grit… I think I ended up with a pretty nice panel. There’s a very small crack where one of the two panels came together, but I’ll just fill that with a touch of epoxy. The yellowish tint of the epoxy should blend in ok with the rest of the wood, but I’ll test it on some scrap.

I’m trying out tung oil for the first time, so I currently have 4 pieces of scrap going through the finishing process while my final panel sits elevated to air out some more. Next weekend I’ll sand it with the 220 again and then start applying finish.

And that was my weekend.

Here’s pictures I took as I went through the process. I was going to try to make a video, but dealing with a camera while going through all this just wasn’t working out… Plus, I tend to do a lot of work in the garage in just shorts, and no one wants to see that on youtube. 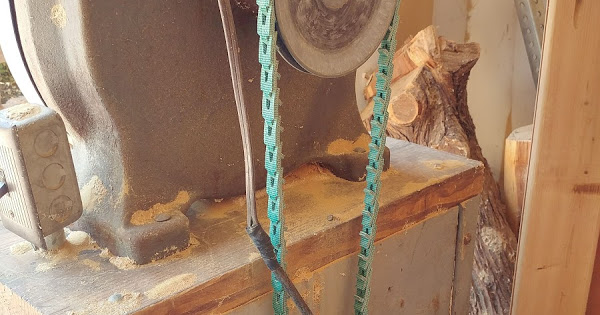