I’m looking for some advice here. My Primo has developed some floppiness in the gantry. I’ve tried snugging-up all the bolts to the point where the bearings don’t spin. I’ve since backed them back out. I can’t seem to solve this. Is this a case of the PLA stretching over time? Do I need new printed parts?

Here’s a video of the problem.

My deep cuts are garbage.

Oh my, been there, done that. In my case(s)… happend several times on me, found bearings in the core were loose. A gentle snug here and there and slop went away. It took a little trial and error checking the bearings after each adjustment. Recently, changed spoil board and milled it flat to find every other pass was leaving a ridge. Core bearings were good , but the bearings for the z axis were sloppy… I adjusted those bearings carefully and next pass left a smooth surface on the new spoil board. Also check the bearings in the trucks. I’ve had similar issues there. Finally, check your belt tension.

Figured I’d pass on my lessons learned. I’ve just made checking the bearings as part of a preflight before running each time. 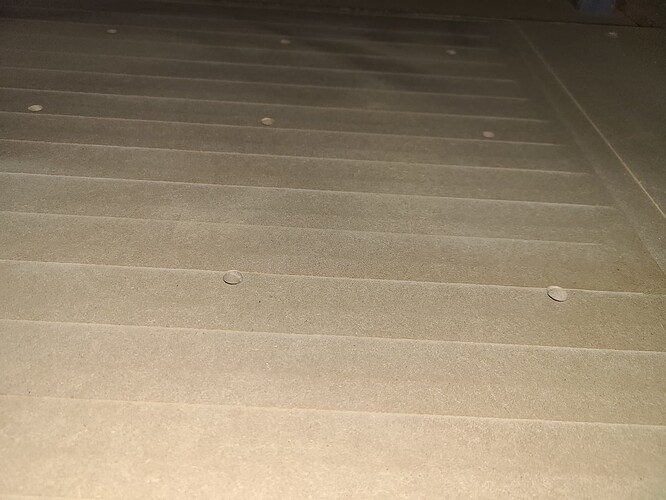 Thanks Matt. I’m struggling with the idea of adjustments. If I tighten everything to the point that the bearings don’t spin anymore, yet the gantry still flops-around, is there any adjustments that I can possibly do? I feel like I’m missing something, or my parts of simply worn out. I may tear the thing down completely and rebuild it as per this.

I just ordered the LRv3, but I plan to keep the Primo for smaller projects, or even mobile projects.

Also check for cracked clamps, particularly core clamps and z motor. All 3 times mine has gone wonky I’ve found a cracked part. Sometimes it happens during an operation, sometimes during storage (temp fluctuations probably). Checking for cracks is on my preflight list these days.

Also, yes PLA does creep. So it is very possible you may have to reprint certain parts that have creeped beyond spec. This is specially true if it has been stored in a hot area without first loosening key parts (core clamps, z bearings, etc). During summer when my garage often goes above 100F, and I’m not planning to use it for a while, I like to back some nuts off a tad to reduce creep.

Lastly… if the router mount flops around a lot, sometimes it’s possible to get a visual on where it’s moving. Look for relative movement between the core and z tubes, also between the x-y cross tubes and core clamps. Those are the 2 most common areas to see movement. Sometimes seeing it isn’t enough… put a finger between the parts and see if you can feel the movement as you force the router mount around. If you feel any “clicking” or “detent like” action, that’s no good… feeling gradual movement is probably fine.

That makes a lot of sense. I’ll take it apart and look for cracks. Also, I do not loosen anything, ever. It is frequently over 100F where I live.

Where do you live? If you don’t mind me asking. I’m in Florida where it gets very hot in my garage too.

Try snugging up the vertical bolts. Those are where i saw the biggest improvement. Small increments at a time

I took it apart and found this. I’ll print four new ones. 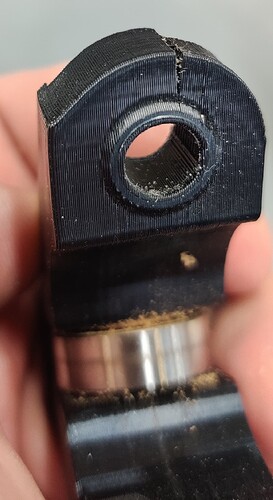 After I took all this one off, I loosened all the other bolts, tightened the vertical ones first. I snugged them until the bearing stopped, then backed it off slowly until they turned freely again. Then snugged-up all the bolts. Even with this one piece cracked, the gantry is pretty snug, and I’m ripping through a carve right now. It still flops on this one bracket, but it’s working pretty good now. Thanks for the hints! I’ll reprint all four of these and replace them later.

This was helpful a read. Perfect timing, too! Thank you, gentlemen.

100% agree!! Any tightening should be done in very small increments

The design is such that the nuts should basically be there to hold the bolts in place, not to exert much, if any clamping force. If you do have to clamp anything, it’s overcoming the vagaries of printing imperfections and/or plastic being, well, plastic. Oh, and the fact that you were using crayons, three different yardsticks, and an old shelf support as a square when you were laying out and constructing your MPCNC, so it’s not quite up to NASA/ESA/SpaceX/ROSCOSMOS standards…

Did you check your grub screws?

Heh, made me think of this pic my wife sent me the other day. 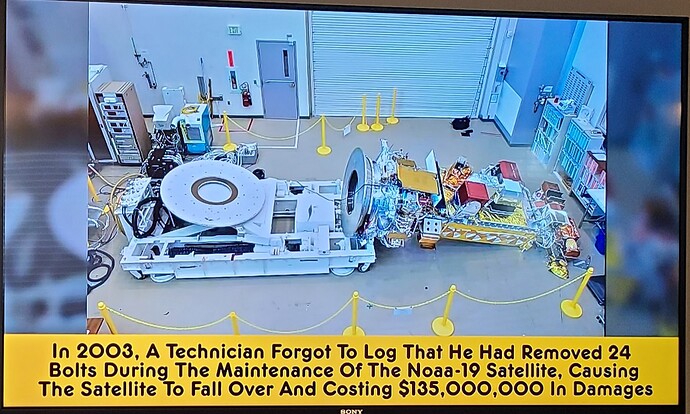 At my company, the guy who forgot to log the bolt removal would probably be promoted to a manager…

“Can’t fire him, he’s vested, hey, promote him! That’ll get him off the floor.”

Those who can’t do, manage.