I bought the kit quite a while back, it was shipped on 5/16/2016 and I have movement today… so, a very slow build. Family and health problems intervened.

I have a question about running the setup solely from the SD card… can a file be dumped onto a card and CNC routines be run from it or is it necessary to use a laptop/computer?

I was also surprised to see all the menus for a 3D printer come up on the screen as I have no intention to run this as a 3d Printer. What’s with that?

Anyway, I can manually move the x,y, and z axis with the knob on the control display so I guess it works.

Anyone have a link to running CNC router jobs off a card with this setup? 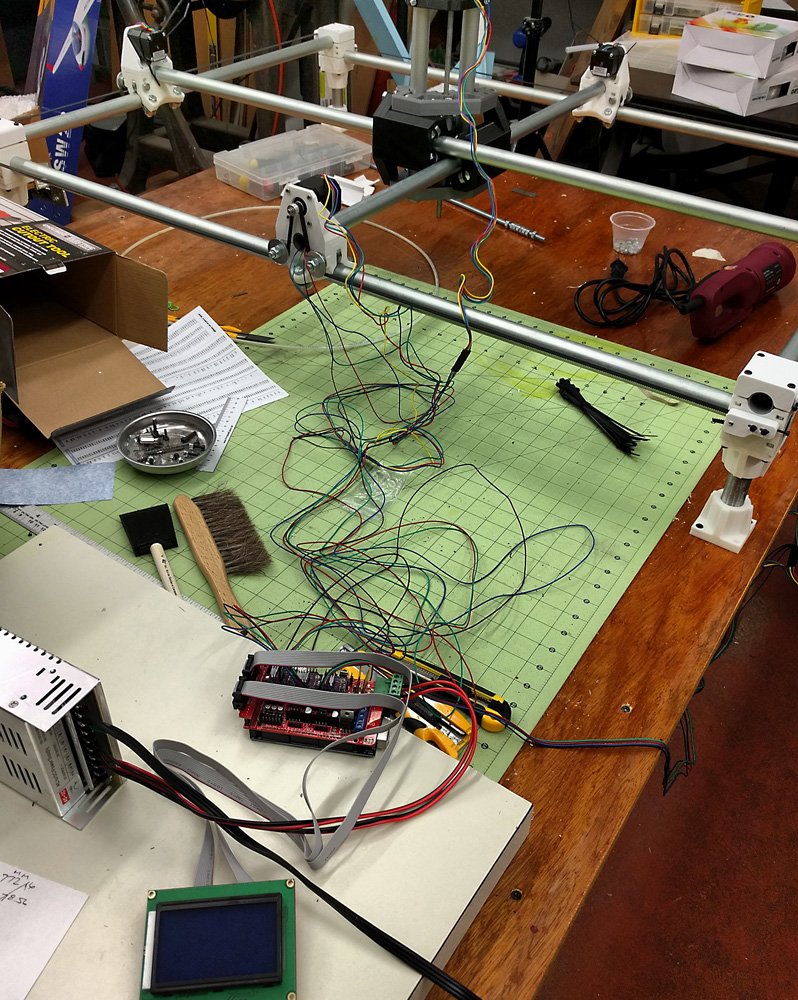 Yes, you can run the gcode off of the SD card. When you insert an SD card, there will be a “Print from SD card” option at the bottom of the menu. It’s basically doing a 3D print job, but there is no heater and no extruder motor. Just travel moves.

I highly recommend starting with the vicious1 tutorials, especially the EstlCAM basics one.

Thanks, I will look at that again. I am brand new at this CNC stuff and need a step-by-step from drawing to running the file on the machine. If anyone has a good link/tutorial on the full Monty, it would be appreciated.

That would be about 100 steps. I’ll give you the overview:

You'll have to build these skills independently. There is a ton of (well curated) info here:

Start with the EstlCAM Basics tutorial though, if you have specific questions or places you’re getting stuck, you can ask here in the forums. If you follow this tutorial to the letter first, then make your deviations, you’ll be less frustrated. Also, since you are a beginner, don’t start with spinning bits and wood. Do a drawing first, then move on to spinning bits in foam, then try wood. If you’re seeing machine problems in the interim, investigate and diagnose those before moving on.

There is no autopilot in CNC.

But this is how newbie I am.

) I am looking to do 3D CNC routing in wood and foam. Foam is for RC model aircraft and will be forming half-shell fuselage sides, etc. But you only mention 2.5D Am I missing something here or will 3D file be exported as .stl also?

Step 2. Very clear except that I thought Fusion 360 had a CAM output already from what I read after you posted it in Step 1. Is EstlCAM still needed?

Step 4. Running from the SD card is what I want so as not tie up my workshop laptop unless you think buying another laptop would be a better way to run the machine.

Thank you again for a very well laid-out procedure.

Step 1. (That’s right, confusion on step 1 already ? ) I am looking to do 3D CNC routing in wood and foam.  Foam is for RC model aircraft and will be forming half-shell fuselage sides, etc. But you only mention 2.5D  Am I missing something here or will 3D file be exported as .stl also?

I’m not sure where the terms come from, but when you see 2.5D that’s what you’re talking about doing. Since the bit can only get to the workpiece from one direction, it can’t really do 3D milling. If the bit is always coming into the workpiece from the top, it can’t get around a corner and cut material underneath material that you want to keep. That’s 2.5D. So the output of your aircraft modeling will be an STL file, which you will CAM only the top surface of.

Step 2.  Very clear except that I thought Fusion 360 had a CAM output already from what I read after you posted it in Step 1.  Is EstlCAM still needed?

Using fusion 360 for CAM is fine. But I would recommend getting a simpler, 2D project done first in EstlCAM. Even if all you do is make a coaster with your name on it. It’s a very simple program, and there aren’t any extra features. The tutorials here on vicious1 and on youtube take you step by step, and you can figure out what milling will look like. It’s free, but it has an annoying wait box until you pay for it. I think you should test it out, learn it a little, and then when you get to fusion 360 and it’s asking for the value of a setting, you’ll have a simpler reference to understand what it’s doing. Or, if you get into fusion 360’s CAM stuff and it’s not working, you have a backup procedure. If you open the STL into EstlCAM, it will change to 2.5D CAM. I still suggest starting with something in 2D first. If nothing else, following the EstlCAM basics tutorial will let you check out your machine, and troubleshoot anything weird that happened during setup.

Step 4.  Running from the SD card is what I want so as not tie up my workshop laptop unless you think buying another laptop would be a better way to run the machine.

Either way is fine. Just know you have both options available, in case you get stuck with one or the other. The software is nice because it gives you some visual feedback before you cut. The LCD is nice because it’s fewer parts to figure out. I’m often in the garage with my laptop anyway, because I never let it run on its own, and I need something to do.

As for the 3D thing, here are examples of exactly what I want to do. Is this 2.5D?

The finished product seems to be 3D to me unless I am misusing the term??? Or is cutting a “half-shell” considered 2.5D?

I may have the terms wrong, but the CAM I’ve seen calls that 2.5D. I think of 3D as the milling where the workpiece or the router can rotate in a 4th and 5th axis.

What you’re showing in those videos is what I’m calling 2.5D.

Hmm, correct me if I am wrong but that is not 2.5D milling. That is 3D milling because in those cuts, all axis are moving simultaneously. 2.5D is where XY can move but then Z must retract and drill down to get varying depths. 3D milling requires tougher gcode but fusion360 has something for that, not so sure about estlcam.

Edit: Upon looking, the human face cut is 2.5D but it uses a ballnose style endmill to finish the edges and make them smooth.

“…all axis are moving simultaneously. …”

Right. That is what I thought 3D printing was called too.

So, will estlcam do that or not?

But like I said, start simple, with 2D, at least until you’ve made sure you machine is in fine working order.

Semantics. Of course we can cut on all 3 axis at the same time. This is commonly referred to as 2.5D, I think once you make some cuts you will realized why we don’t say 3D. On any 3 axis mill you are extremely limited on what your Z axis can do, if it was 3D you could mill a pair of dice without 6 flips or a mushroom without a rotary axis.

That came out wrong. We have a 3D machine, not 2.5D cause we can move all axis at once at any rates. Though our actual milling processes are 2.5D of course cause we can’t make true 3D featured parts unless you reorientation the work piece. Ok i’ll stop talking now.