Well… it worked! came out to 150 pounds and can be easily folded up when not in use with two hands.

After mounting on the wall it had no measurable sag or twist at all… that may change with time though. 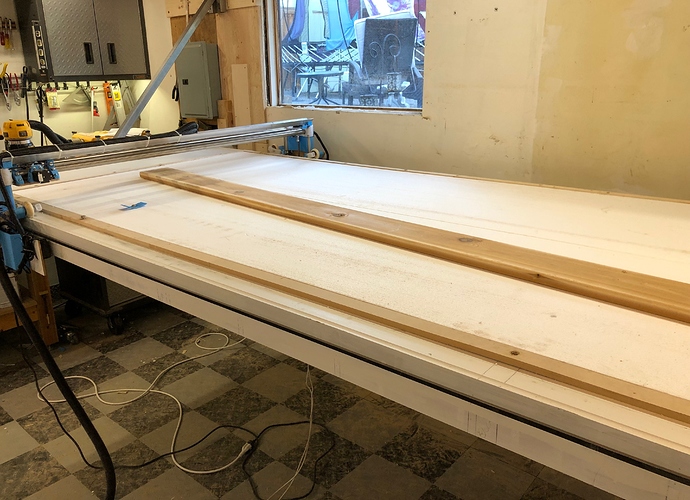 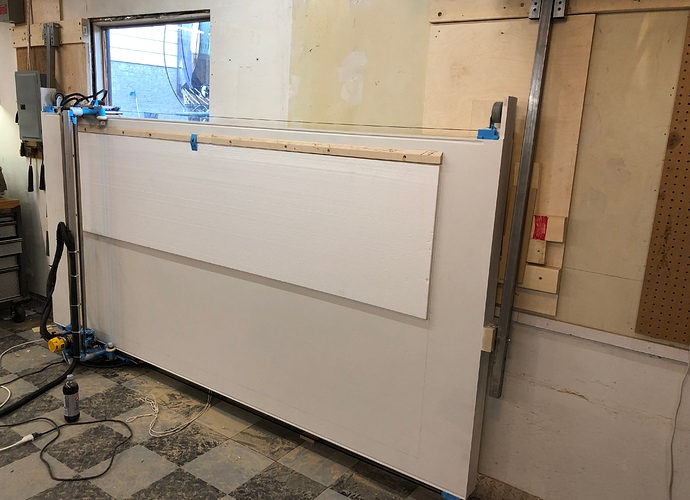 That is epic. I would love to see more details and have some annotations to the build images. The torsion box looks very stiff. That strip with the threaded inserts, is thay just for clamping? How is it attached to the wall behind the table? How do you keep the gantry from falling off?

That is the first complete folding table? Awesome!

That is epic. I would love to see more details and have some annotations to the build images. The torsion box looks very stiff. That strip with the threaded inserts, is thay just for clamping? How is it attached to the wall behind the table? How do you keep the gantry from falling off?

I’ll go through and annotate some of them now. The design on this was like 10x the work of actually building it. I’ll attach my cutlist too. I used ultralight MDF for everything but the front and back strip since it wasn’t available in 10 feet but I think I would probably just end glue 8 foot ultralight if I did it again. Ultralight MDF is awesome stuff.

The strip with the threaded inserts is just for clamping. It’s 3/4" baltic birch. I’m not too confident this is what I want for a permanent solution so I just glued them on temporarily with contact cement. So far it seems good… I used my dewalt pen holder design to have the carriage draw a box around the cuttable area of the table and glued the strips along x=0 and then placed the top piece to accommodate an 8 foot sheet. The spoil board is only 1/2" foam so it makes a natural registration lip for what I’m cutting. I also have softwood blocks glued to the webbing strategically under the top skin so I can have some very strong threaded inserts directly in the table too. I’m wishing I had gone metric… finding 3/8" nylon threaded thumbscrews is a lot harder than getting metric ones.

Attaching to the wall… here is the disclaimer. I’m not an engineer and don’t follow my example thinking I know what I’m doing… I don’t. Hanging hundreds of pounds on a wall can be dangerous if done improperly and you should run your design by an actual engineer to make sure it’s safe. I chose to attach two three feet sections of 2x6 to the wall using six long structural screws in each side… two per stud, each into three studs. I just found out about structural screws and I’m never using lag bolts again. Then I bought some box steel and drilled it out and attached that to the 2x6’s with more structural screws (six per side). Everything is bolted together with grade 5 bolts 3/8" diameter. I doubled up on the 3/4" MDF where the bolt goes into the table and used a T-nut inside the table. There is also a 2x4 ‘cradle’ held together with framing angles and structural screws that goes under the bottom and up both sides that the bolt goes through. The idea being I can add a shim between the 2x4 and table to compensate for sag or worst case add a hinged adjustable height support leg. The swing arms should be as long as possible… mine would have been high up the wall near the ceiling but I just didn’t have the energy to move that huge heavy air cleaner mounted to the ceiling. The secret sauce is attaching rigid casters to the back and mounting a track on the wall for them to run on.

Not sure how the gantry could fall off… on a 4" table there is almost no wiggle room. The bottom pipe clamps have about 1/8" of clearance. There is only 1/4" gap on the sides and the carriage just slides to one side as you lower the table. I have a 1/4" spacer I can slide between the pipes and the table on the top side but I usually forget to with no ill effect. The one thing I do is raise up the carriage all the way and clip on some clamps to the pipes to keep it there so the lead screw and pipes clear the back wall. I posted this clamp on thingiverse.

Here is an interesting article on structural screws: 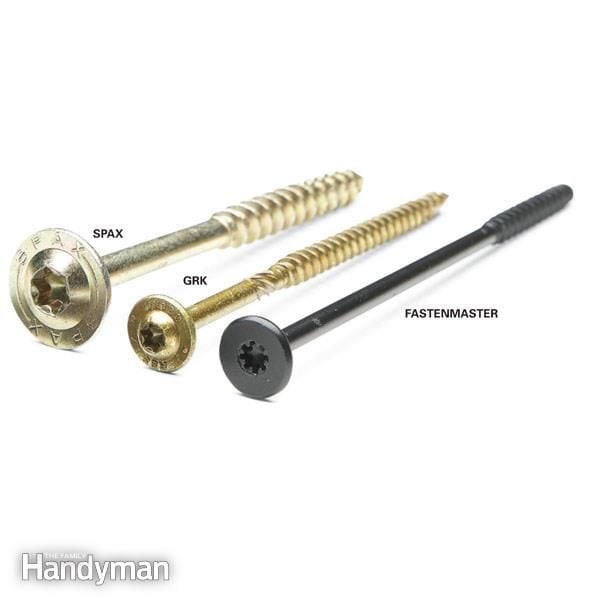 High-strength structural screws are beginning to displace traditional lag screws as the fastener of choice for structural applications. Here's how they compare.

I didn’t notice the casters or the mdf extensions to hold it away from the wall. I suppose you could also put it on saw horses when using it to avoid the chances of it folding back up.

Wow, that’s awesome. More pictures around the sides would be good to see. I want to keep my big table but haven’t solved my storage question yet either Greg. I was thinking of a “simple” hoist it to the ceiling solution but I’m always open to smarter ideas.

Brent, I added some more side photos to the link at the top.

After doing a project on this new setup I’m pretty happy with the clamping system so I’m permanently attaching them to the table with wood glue and some 5 " bolts through the table. Putting the table away and taking it out is super easy… like a 2 minute operation.

I am starting to see some sag… 1mm in the center. I might be able to correct it with some shims under the table and above the cradle but my next project will be a pressure disc that mounts in the router like a bit so I can do a bed levelling map of the whole table with a sheet of stock on it. Marlin lets you make a map of the bed, save it in memory and then just offset it by the z homing height. It should make for some crazy accurate cut depths.

I added some gas springs to the arms but still not at one handed operation yet going to order some bigger springs. It was quite usable without any springs though.

Biggest drawback so far is just the lack of access to the back of the table.

That’s awesome thanks for the additional photos, it is quite a setup and your torsion box looked great after all that care getting it right. I’m jealous that you’ve found a way to get it out of the way.

Did you consider putting posts or supports under the table when it’s folded down just to reduce that levered force? It’s probably not necessary but it may help with sagging as well as with reducing the pull on those studs and bolt/anchors.

That’s one of the reasons I ran the 2X4 along the bottom… I can attach a post with a swing down leg and adjustable foot to it. I hate to give up the quick access though. I made a little test table first out a sheet of mdf and when it sagged a single support in the center was able to completely flatten it out.

Honestly I thought the sag would be worse… according to the ‘sagulator’ calculator it should have been a 5mm dip in the center increasing 50% over time. Maybe it’s just pessimistic. I think a y plate and box 6” high would be much more rigid if someone were going for zero sag.

Adding up the specs on all the connectors I used they should be good for 6000 pounds and the weight of the table per stud should only be 35 pounds or so but again I’m no engineer I might have missed something.