I want to build something of an appropriate height for my diode laser that I can pick up and set on top of large things to engrave. I haven’t decided on a size yet, but I’m thinking that I might be able to get this done with the zenxy platform.
I thought about scavenging the burley parts from my teeny tiny because I had to put it away since I moved into the rental, but I have two spare nemas anyway, and I’m petty sure that the MOMENT I get the last part disassembled, I’ll need to cut some metal in a serious way.
Any thoughts?

It won’t work out of the box, but you might be able to mount a laser to the top of the main gantry piece. It still has quite a lot of moving mass though and if you were going to custom build a laser machine like that and wanted corexy, I would guess there are better approaches. The cantilevered plotter design is one example.

I’m just looking at the box of stuff I have and this looks like a cheap way to get into it. I think I have everything on hand except the emt, including the diode. Well, printed parts, but I have plastic.

I’m not terribly concerned about moving mass, since this would be a slower machine anyway, just for engraving lines, no raster.

Biggest “want” is something I can move to a bench or the floor on top of something to burn, plug it in, and go, then put it away on a shelf.

It can’t be upside down (it depends on gravity to hold it down). It also is designed to bolt to the bottom of the table. It also isn’t rigid on its own. I think an mpcnc would be a better choice.

Ahhhh. I thought I’d be able to screw the corners to something and point the gantry down instead of up. Sounds like it’s going to be more work than I want to do for this.
Thanks for saving me!

I have drawn the 4 corners in a way to mount them down instead of up. They aren’t as pretty, but I could share them if you’re convinced.

There also isn’t a laser mount. So you’d have to figure that out as well.

I’m not convinced. Corexy is attractive because I’ve got 2 motors in the drawer. I did find the cantilevered design you mentioned and that might do the trick, too. I guess I just need to noodle on it some more.

We did manage to sell a bunch of stuff over the last month, so a jointer is coming to the collection. That’s gonna take up some of my time, too, because I’ve got a few projects I’ve been putting off on account of not being able to properly square board.

And I still need to build that dang speed controller!

Hey @dkj4linux I just came across your build here: 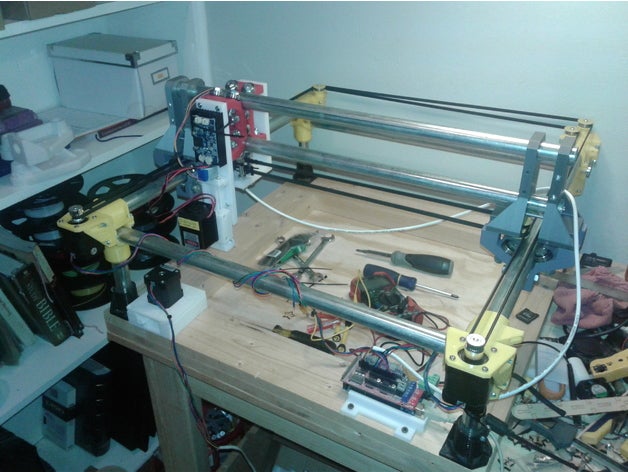 An MPCNC-inspired CoreXY Laser Engraver... Please recognize that this machine is too large/heavy/clunky for best corexy operation and is NOT a general-purpose CNC machine -- but as a dedicated laser-toting machine, with no real tool-forces to deal...


I like that it’s built with tubes and plastic, and only needs 2 motors, which I already have. Fair chance I have all/most of the bolts/bearings to get it done, too. After Jeff’s messages above, I’m seriously considering taking apart my teeny tiny burly MPCNC and repurposing it, but it’s the only think I have that cuts shapes out of metal so even though I haven’t used it since I moved, it’s nice to know it’s there.
Did you use this machine for a while, and did it make the list of machines you really enjoy or end up in the category “fun to build, but less useful than anticipated”?
Thanks.
Edit: Wifey just confirmed that she probably won’t need anything from the teeny tiny, so I’m gonna slap some longer tubes in it and get started that way. It makes me sad, because I really wanted to push it a bit in some steel, but until I get my welder back in action I can’t think of anything useful coming out of it. Besides, that concept really needs to be a primo anyway, and a few extra inches in xy. So, better to do it all in one shot. When I get that far, I’ll scavenge the electronics/motors back from the laser and build your coreXY if you recommend it.
dkj4linux (dkj4linux) January 16, 2021, 9:28pm #9

I wouldn’t recommend it. Having built and rebuilt several MPCNCs by that time, I had a box full of previously-used plastic parts, bearings, and hardware – and wanted to play with CoreXY – so I whipped up a quick frame, adapted a few parts to make the motor mounts and gantry bits, and used TinkerCad to create a few others to get an operational machine. Though it worked pretty well as a laser engraver and I engraved a few fairly accurate rulers and made a couple of videos… it was IMHO just “too large/heavy/clunky” to be a general-purpose CNC machine. I dismantled it a long time ago but it was fun to build and allowed me to “scratch an itch” at the time.

Thanks. I’m not looking for a general purpose CNC, just something for my diode and I know you’re THE GUY in that arena. I’m feeling better about repurposing the burly right now, though, so thanks for that. Let me know if you come across an OK cheap-to-build-2-motor-solution-with-tubes for a laser!

I suspect if you flip it upside-down, rework the corners, and add short legs to ZenXY, you could pretty easily come up with a CoreXY machine using tubes and bearings? I’ve thought about it a few times but just never gotten motivated enough to do it.

EDIT: Just looked back a few posts and saw that a modified ZenXY had already been mentioned. Oh, well…

I’m glad to know you thought of that, too.