While the Blackstripes stylized svg stuff I’ve done in the past is both fun and fast, it isn’t suitable for showing the detail of real photos, of course. Grayscale and various dithering methods are normally used to handle photo images… and recently, inspired by Jim Williamson (aka Bulldog) over on the Lightburn forum, I’ve been playing again with Lightburn and my 2.5 watt Eleksmaker lasers and I am starting to see some pretty encouraging results… though my efforts still pale in comparison to the stunning results @Bulldog is getting. 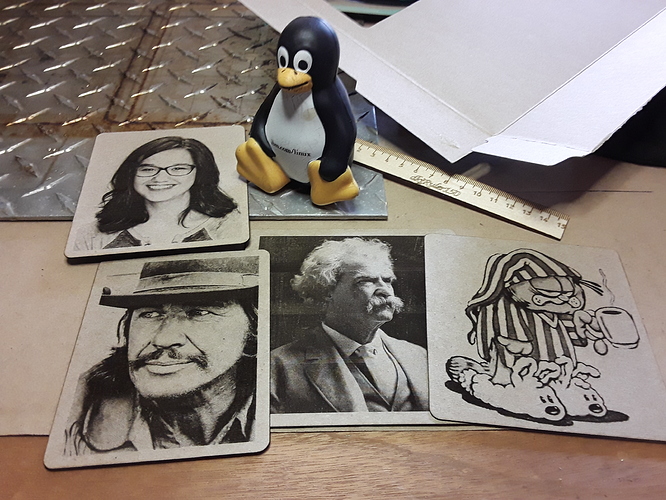 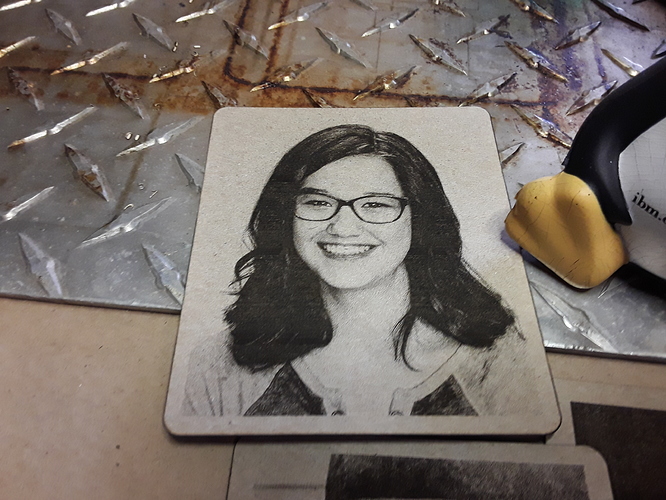 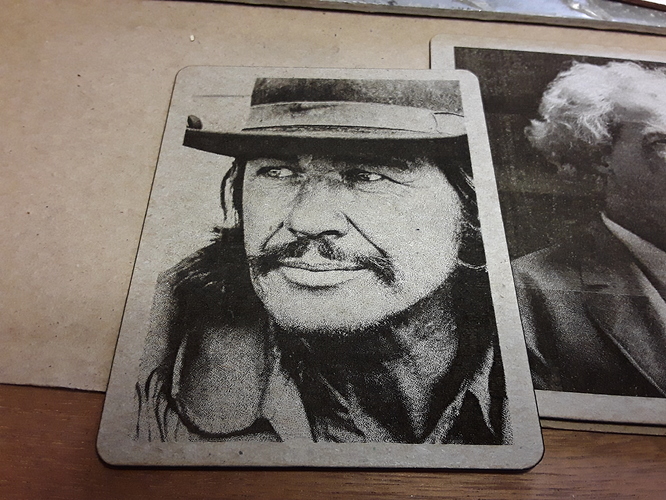 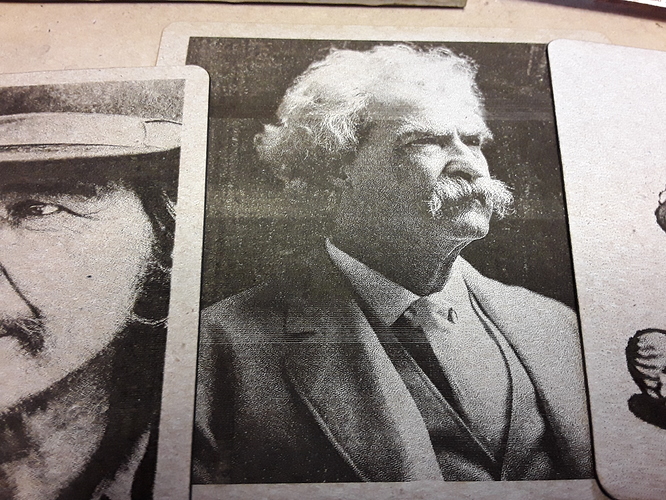 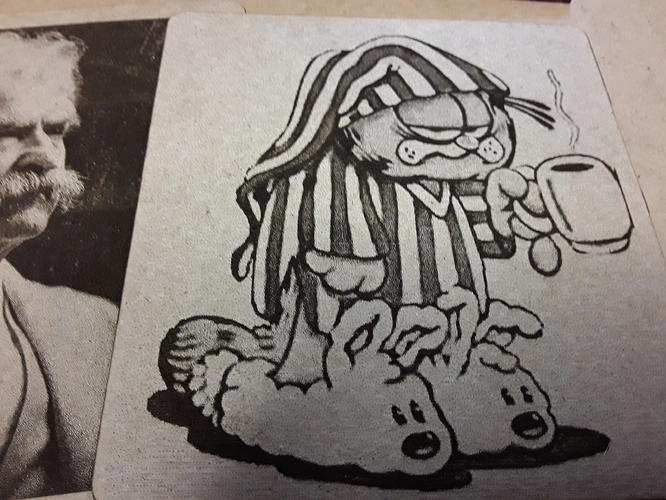 Scarier, I wanted to see what I could get out of my very poor avatar pic… 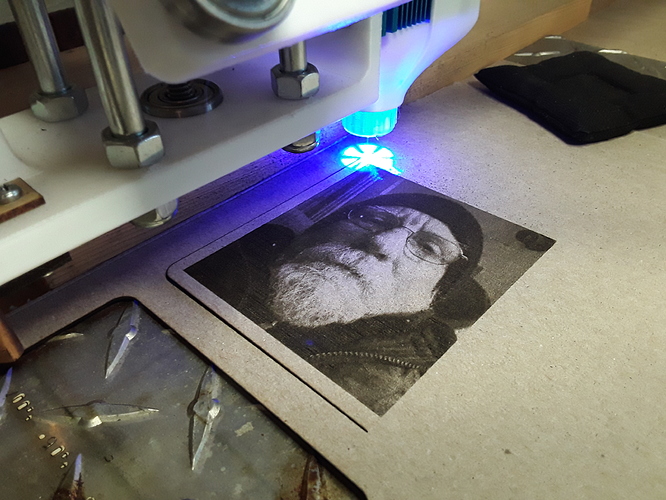 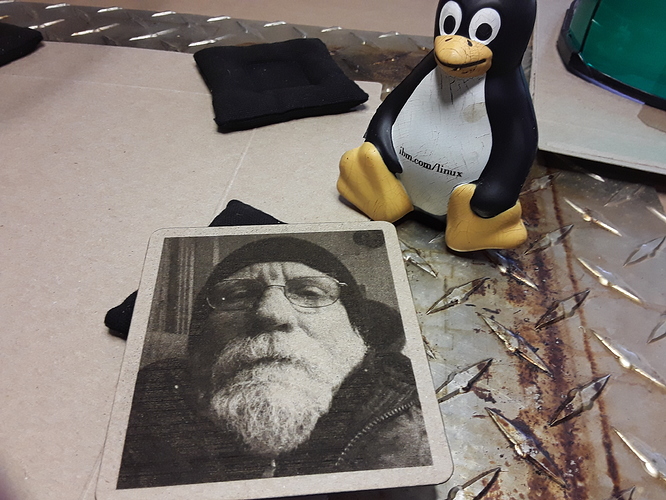 Here are a few craft-stick images that take only about 10 minutes to do. Still have a long way to go learning to get photos ready for engraving… 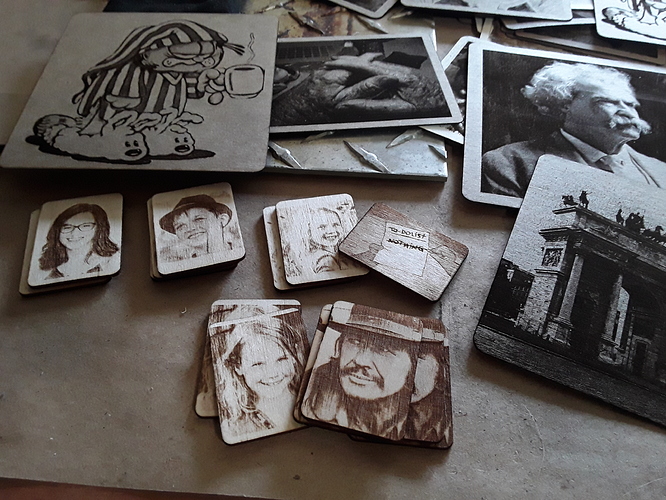 Even R&P MPCNC is getting in on the act… 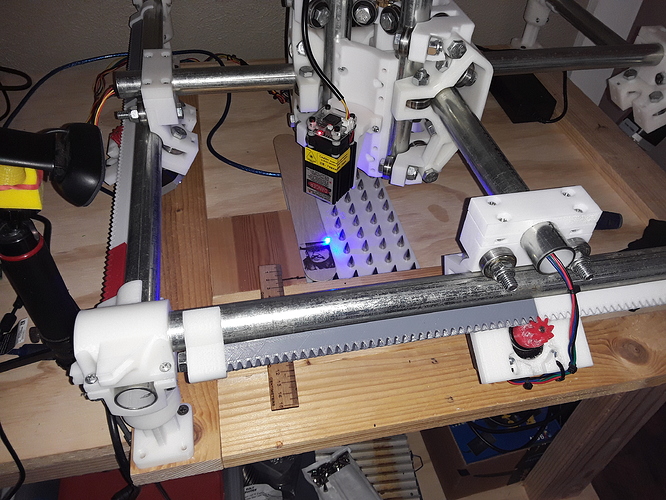 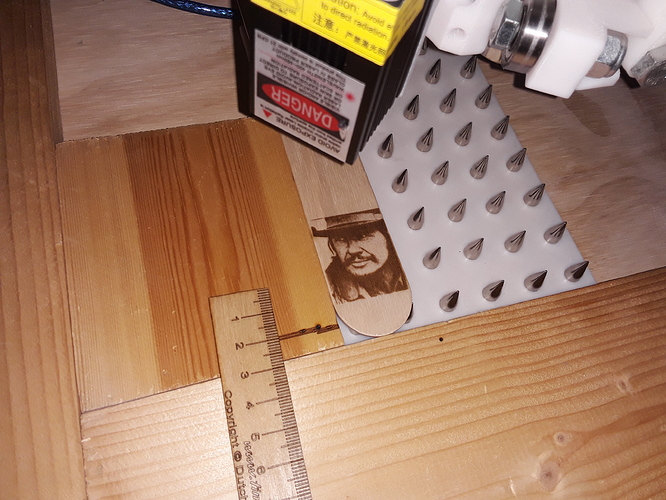 These are all dithered (mostly Jarvis) images from Lightburn generated gcode, engraved on cereal-box chipboard, craft-sticks (birch?), and water-color board with a 2.5 watt Eleksmaker laser. I’m still playing around with this stuff and trying to move on to different materials… eventually hoping to try my hand a the ceramic tile stuff @Bulldog is doing. Hopefully soon I’ll be able to get out and get the supplies I need to give that a shot…

Playing with a bunch of Lightburn’s settings and various photos and materials, we (Tux, the dog, and I) are starting to see some interesting effects… 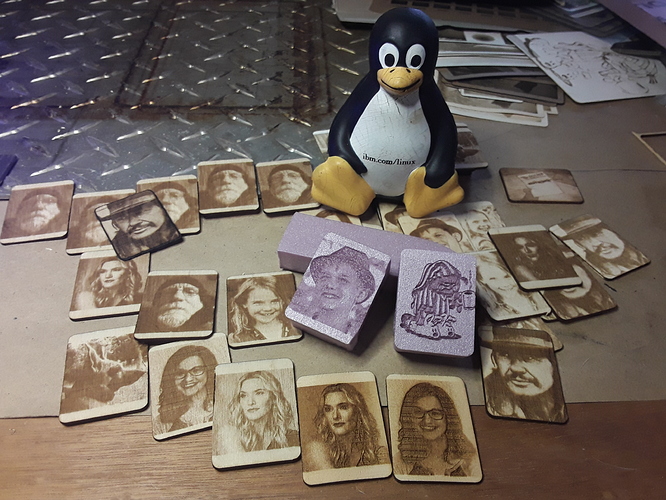 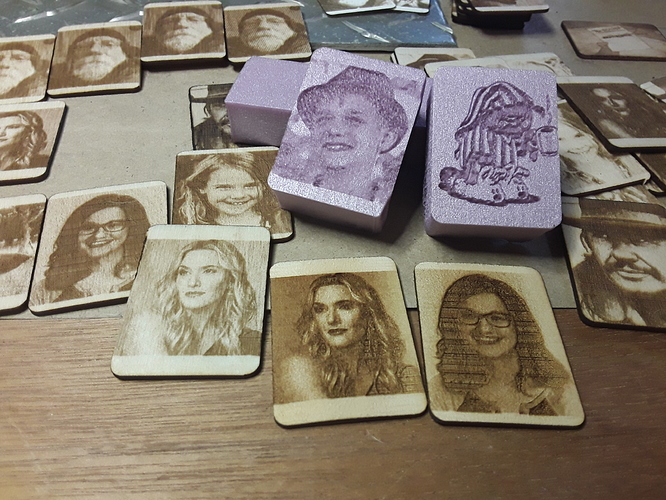 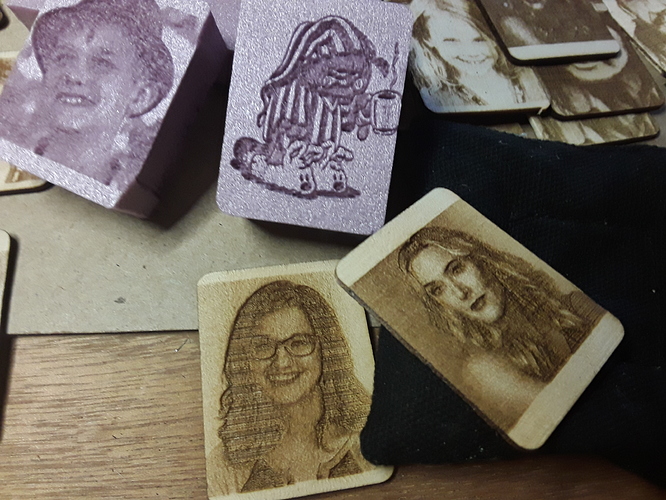 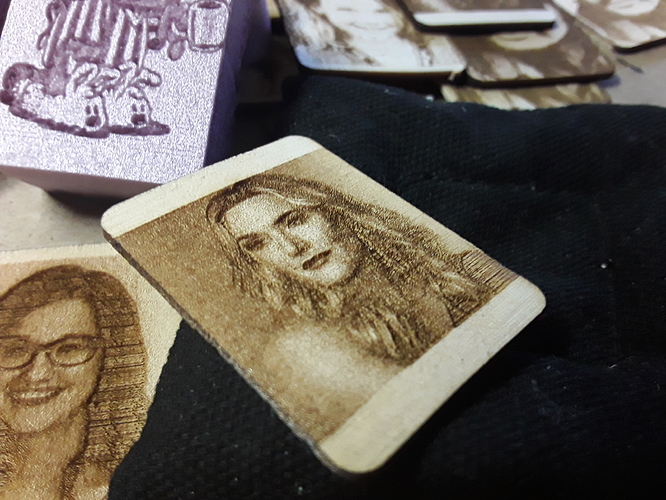 Oh, in case I haven’t mentioned it before… Kate (I call her “Kate”) and I… we’re just like

Oh, in case I haven’t mentioned it before… Kate (I call her “Kate”) and I… we’re just like

I dunno… I’m thinking you may have some sort of… “Death Wish”.

Just playin’. Fun with some construction foam… lots of scraps left over from hot-wire project for SIL… 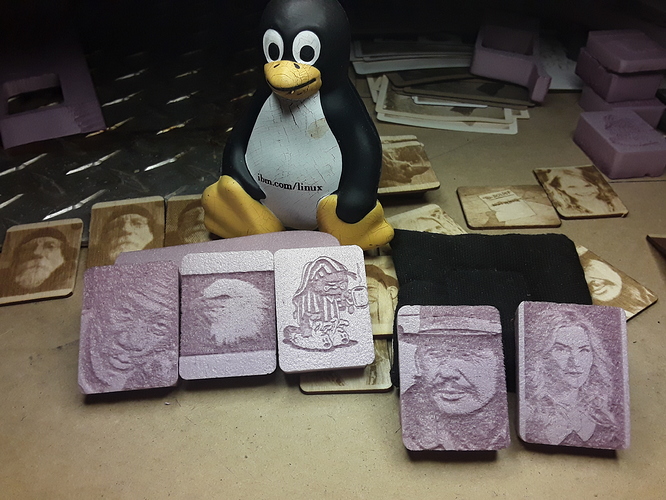 I need to get my laser going!! That looks really good!
Thank you for sharing.

I’m just finishing up my laser setup, I’m looking forward to starting testing. Your work inspires and encourages me.

Greetings to you, too! And thank you for the kind words. I look forward to seeing your progress.

Great jobs, David! Quick question… are you still running Marlin on your MPCNC that you’re using with Lightburn? Or is it using grbl?

Hey, Heath! I’ve come to really appreciate Grbl… especially its ease of use, changing settings on the fly, and the dynamic laser mode of versions 1.1f and later. And Lightburn is a powerful, multi-platform, piece of software that is well worth the $40 and pretty much replaces most of the Inkscape/Jtech laser plugin functionality I’ve used in the past… not all, but most. I don’t use Lightburn for machine control, however… only to process artwork and generate gcode (it can do both Grbl and Marlin). For machine control, I’ve grown fond of using the Pi/V1Pi/CNC.js combo… from my Chromebook/Linux(beta) laptops and recliner. Nothing fancy… but I find this workable for most of the work I do; i.e. mostly laser, some light CNC, and even a little hot-wire. For 3d printing, I don’t do anything special at all… I simply use the front-panel LCD interface on my Prusa MK3S.

I gave Lighburn a trial about a year ago, but while it generated compatible gcode for Marlin, the results just weren’t as good as Estlcam and image2gcode. The developer said at the time that Marlin was the least recommended controller option. Despite those issues, I loved the program, but put off buying it either until I switched to grbl or it offered more support for Marlin. I haven’t switched to grbl yet so I was just curious how it’s Marlin support had come along.

I was able to start the tests. I thought this would be a piece of cake, but it wasn’t.

My first test was… well, see for yourself: 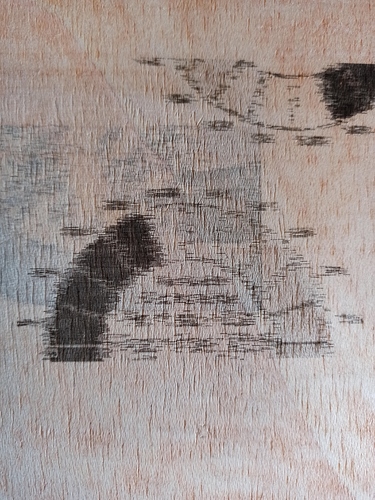 Doing a little research on the forum seems to be a common firmware problem. I made a modification to the “Marlin.cpp” file, following this thread:

I do not know if this modification will negatively affect any aspect when my machine does not work with the laser, but well, now the result is quite better. 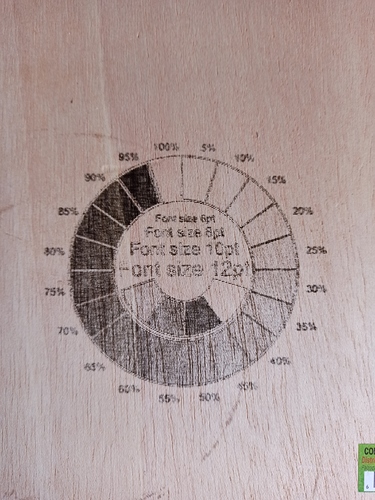 The software I use is “Image2Gcode”. 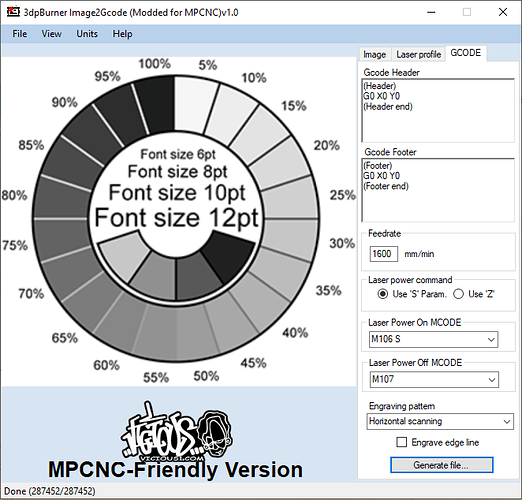 Any suggestions are welcome. Add that my machine is an LR2, with this firmware. My electronics is Ramps, and I use pin 44 with the M106 and M107 commands to control the laser.

Here is a lengthy thread from a year or two ago, that will give you some history behind the firmware mods (that I think you’ve applied) that had to be applied to get good engravings from the later versions of Marlin. In that same thread, I also discovered Victor’s ImageToGcode program, which seemed to give me better results at the time than the Image2Gcode program I had been using… and which you are using now. It’s confusing but, though similarly named, these are NOT the same program.

TBH I don’t remember much about all the testing and discussion we did (probably an age thing…I’d have to re-read the thread) and don’t know whether those mods actually made it into the current Marlin build (Ryan and Jeff should know…). Since then I’ve come to prefer Grbl for my stable of machines (I don’t currently have any set up with Marlin…) and discovered Lightburn. Grbl just seems better suited for laser use with its “laser mode” (M4 power adjustment with feedrate), ubiquity, and ease of use. And Lightburn runs beautifully in Linux and is very powerful/versatile while both Image2Gcode and ImageToGcode are Windows programs… so Lightburn has become my preference and I’m happy to pay the $40 for a license.

In short, all I can suggest is to read through the referenced threads and hope that someone who is currently and successfully using a laser with Marlin will speak up. I’ll also suggest that it’s hard to beat chipboard (cereal-box cardboard) when testing your laser setup… it’s cheaper and more uniform/consistent than real wood, which varies greatly from piece to piece, even of the same species. Finally, I must admit I NEVER got the results I’m seeing now (with Grbl/Lightburn) with any of my Marlin-based machines. Maybe sufficient progress has been made in Marlin that it’s now possible to get the same results… just saying, I never saw it when I was actively using it.

Sorry I can’t be of more help. Good luck!

I will read the thread carefully, I had seen it and read some of it, but not all of it because it was quite long. I like this topic of the use of the laser very much and I am going to dedicate time to see if I can get good results.

I am going to try the software you recommended.

I’m looking at the software you mentioned, Lightburn, it looks very complete. Before I start any work I try to do a configuration according to my machine. I’ve been struck by the default speeds and accelerations that come with it. 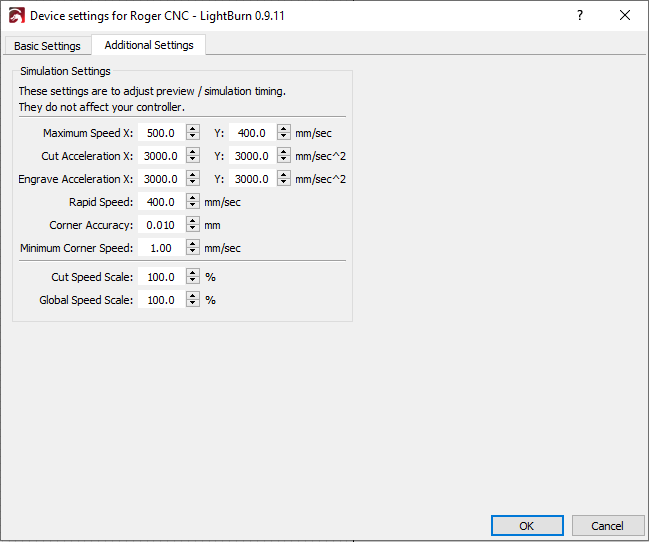 Could you recommend some more conservative values? I think they are too high for a Lowrider2.

Lightburn is laser-centric software that targets a very large contingent of CO2 laser owners… and I think the defaults are very much aligned to the settings for that class of machine. The particular window capture you show is primarily “simulation settings” – designed to adjust preview and simulation timings and DOES NOT affect your controller. I pretty much ignore that panel… and I don’t feel I’m missing anything.

That said, the LB forum is a high-quality hangout and many of us “lesser” DIODE laser folks attend and receive very good support and respect… though there are many more Grbl users than Marlin users. I didn’t find it difficult at all to adjust/save/load the feeds and speeds/power for each layer’s cuts for my DIY machines… and there is a wealth of setting to adjust your LINE, LINE+FILL, and IMAGE settings for each layer. I find it especially nice that vector/raster images, profile/vector cuts, and filled shapes can all be readily prioritized, placed, and exported in an integrated gcode file and then fed to CNC.js, UGS, Repetier, etc… rather than run as several separate jobs, as I used to do with Inkscape/Jtech laser plugins.

I’d suggest downloading the trial version (it’s fully functional) and verify it works with your hardware… you get 30-days to put it through its paces. It runs on Linux, Mac, and Windows… and I use it daily on my Chromebook w/ Linux(beta) and it runs beautifully. I’ve depended heavily on Inkscape/Jtech laser plugin in the past… and I find that Lightburn does virtually everything – and more – than I did with Inkscape. If it works as nicely for you as it has for me… I think you’ll be happy to spend the $40, which allows installation on two machines.

Once again, thank you very much for your help and advice. I think I’m all set to start doing some initial testing with Lightburn. I have the machine working on a portrait that I prepared with the other software that recommended “ImageToGcode”, it takes 4 hours because it has 300x200mm dimensions, but it is almost finished, I will share the result.

I will stop by the LB forum to have a look.

Finally, my first engraving is over. I’m happy with the result,

maybe a little clearer would have been better. 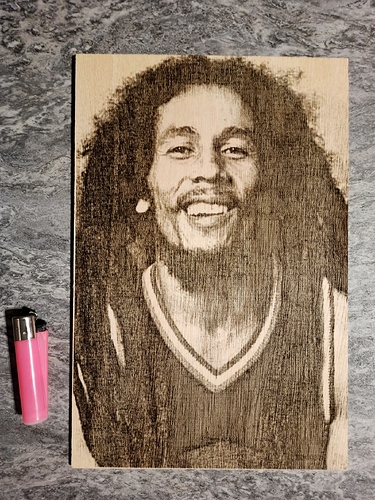 Wow! That is outstanding…

If you don’t mind… what feedrate, power (min/max?), and resolution (vert/horiz?) did you use on this engraving? 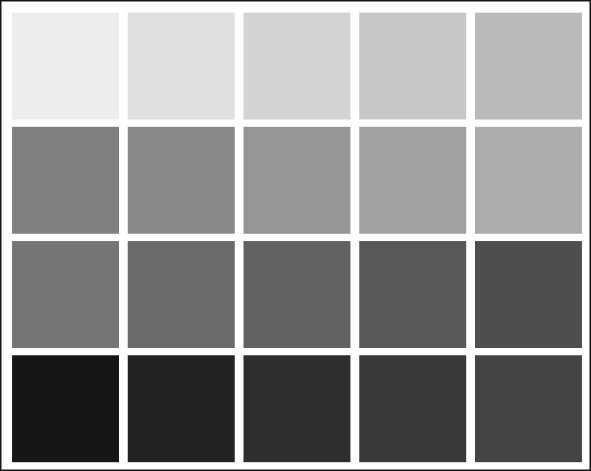