Here are some plant marker signs a family member ordered. I think they turned out well. They were burned with a wood burner in the pen mount then milled with a 1/8 end-mill 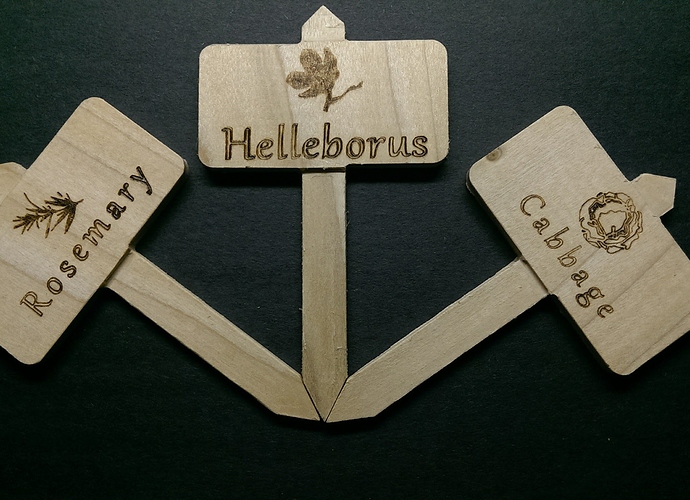 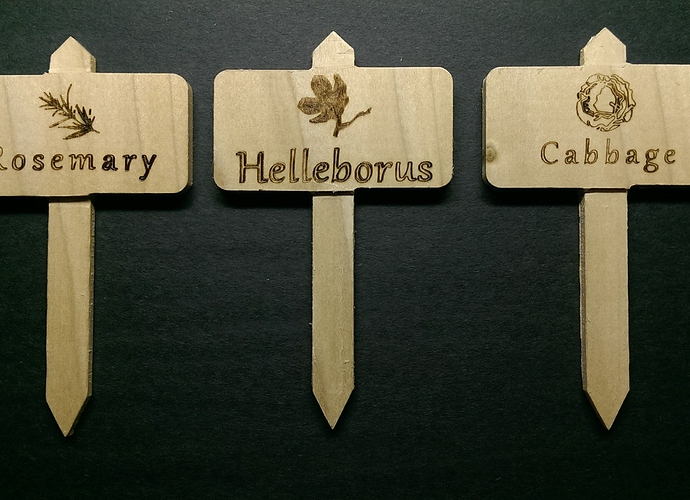 It works for me as an equivalent for a poor mans laser engraver. I want to get a laser eventually, but it is lower on the list than a print head. I have been wanting to try using the pen mount for the wood burner since I built the machine, but I have been focused on some other projects.

You can control even the cheapo “non-adjustable” $10 wood burners or soldering irons with a standard dimmer switch or router control no liability if you burn your house down obviously haha. It adjusts the temperature and therefore the burn darkness, but the time the tip is on the wood is a big factor also.

I got my tool speeds from taking a pre-measured section of scrap wood and running the burner tip across it at different speeds and seeing what I liked. I usually run mine at ~1/3 through the high setting on one of the harbor freight router control boxes (sorry it is non-quantitative). I want to try turning it lower and doing multiple passes for shading. Adjusting the knob during the cut doesn’t really help with that because it doesn’t catch up on temperature quickly enough to shade it during the cut (unless you were to include some sort of pause or tool change type code). Either way I can get some really good detail with it. The little signs are 1.5 inches tall (the sign portion, not the stake) so you can see that cabbage has some legit details, and that isn’t with my finest wood burner tip.

That is an awesome idea. Never thought about trying that. Hmmmmmm

Using the dinner switch to control the darkness, and then using it to do like scan drawings. That would be awesome.

First, you need to control the dimmer with the Arduino. You could go the route of the servo and two years, there are some youtube vids with that.

But the hard part is the time latency between changing it and having it get to the temp. The other likely problem is that the temp change is likely open loop, so you won’t get consistent temps…

You could add temp feedback, and then you could add a control loop. If the speed you moved the pen is way way slower than the temp change, then a PID would work. But it’s probably not. Better would be to predict what temp you want in the future and then set the setting early (I can’t remember, is that a lead-lag?). You’d have to have your controller see the gcode before the Marlin did. Then there’s the problem of accurately determining the model for the pen, which is probably simple.

The other thing you could do is in the CAM software. Instead of just driving at a single speed trying to vary the intensity, you could drive at different speeds, and vary the speed… That would be a pretty simple solution, actually. You’d just have to find Leo, and bring a six pack.

Those look great! Does your wood burning device pivot like a drag knife?

@Jeffeb3 -All, good ideas. I would really like to add at very least a temperature monitor to know where I’m at, because right now I just have to wait a few minutes to be sure it has gotten to a consistent temperature. I am sure I could add a servo controlled knob with the arduino or even just directly control it with a PWM motor controller, but the latency between adjustment and temperature change would still be an issue. I think the simpler solution that I would like to try for now would be to run the tool-paths multiple times to get darker results. So, I could run it once on a lower setting to cover all areas I want at the minimum darkness then go over the areas I want darker 2 or 3 times to control shading.

@Jim Hildebrandt - Thank you! no it does not pivot, but the burner comes to about a 45 degree “V” type point and because it does actually burn away a small amount of material as it goes through it moves along fine as long as you don’t move it too fast or deep.

I found a wood burner on Amazon for $0.10, plus a bit less than $5.00 in shipping (I’m guessing someone didn’t notice where the decimal point was), so I’ll give this a try later in the week.

My feed&speed/tool settings are from Fusion360 if you want to try them with your burner. I use cutting feedrate of 152 mm/min (don’t forget to convert to units if you are switching it to estlcam and your tools are in mm/s) I use the same rate for lead-in and lead-out and Ramp. Plunge rate is 200 mm/min.

I have used pockets to shade in areas and contours to trace the lines I am also about to try fusion’s engrave for one of my complex shapes that had a bunch of outlines. I’ll post results later.

So, because of how fusion’s engrave works, which I personally really like normally, it did not quite do what I wanted with the burner so I ended up just converting the engrave path back to a contour, but I finished up this order, and I think they turned out well.

Here are the new ones and the finished set. 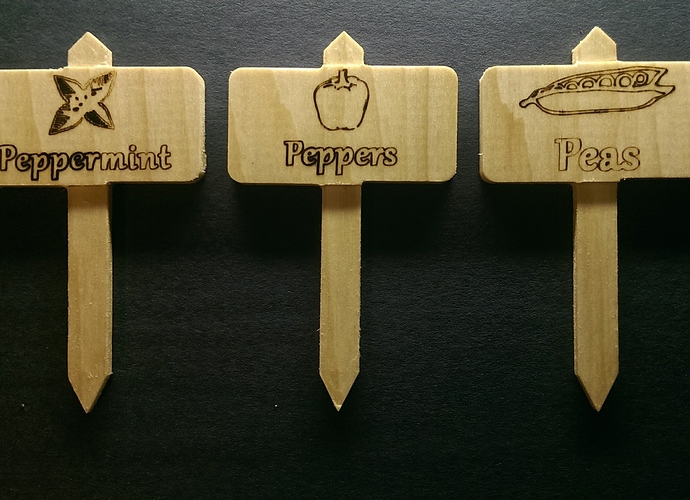 When you get a chance can you get a pic of the wood burner on there. I would love to put a link to this thread in the how to page. I get pretty excited by new ways to use the MPCNC.

I would be glad to get some better pictures of it mounted up or even a video of it burning. I have a couple of pictures from running this batch, but the next time I hook it up to run I’ll get some better ones. 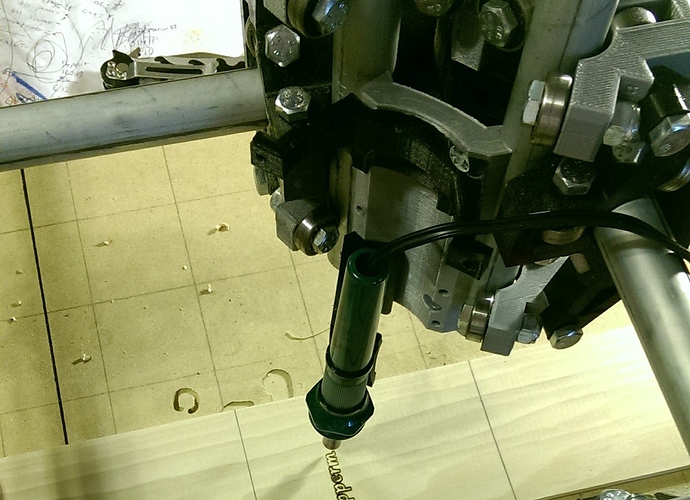 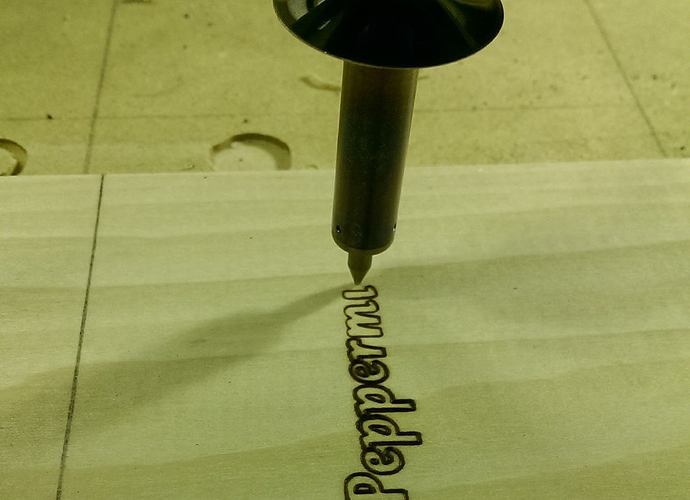 Cool idea… what type of wood are the markers made from ?

That is just superb.

So standard conical bit and 152mm/min - might give that a try with an old soldering iron.

I am using 1/4 in poplar currently. I used fusion to create a path for the wood burner first. Then I ran that, swapped tools and ran my endmill. The “post” is created by making 2 pockets to recess that section from the sign part.

I would be glad to get some better pictures of it mounted up or even a video of it burning. I have a couple of pictures from running this batch, but the next time I hook it up to run I’ll get some better ones.

Really like this idea, and I’m going to try it - but I needed a mount that’s compatible with the flat faced universal tool mount I’m using:

Compatibility I created it for F525 but it should work for most models. Please let me know. 1. august - v2 model m4 mount holes are spaced evenly along the length, so doesn't matter how you fasten it to your MPCNC. (top and bottom are the...

Attached (hopefully) is the zipped .stl of a holder I made for the Harbor Freight Woodburner. 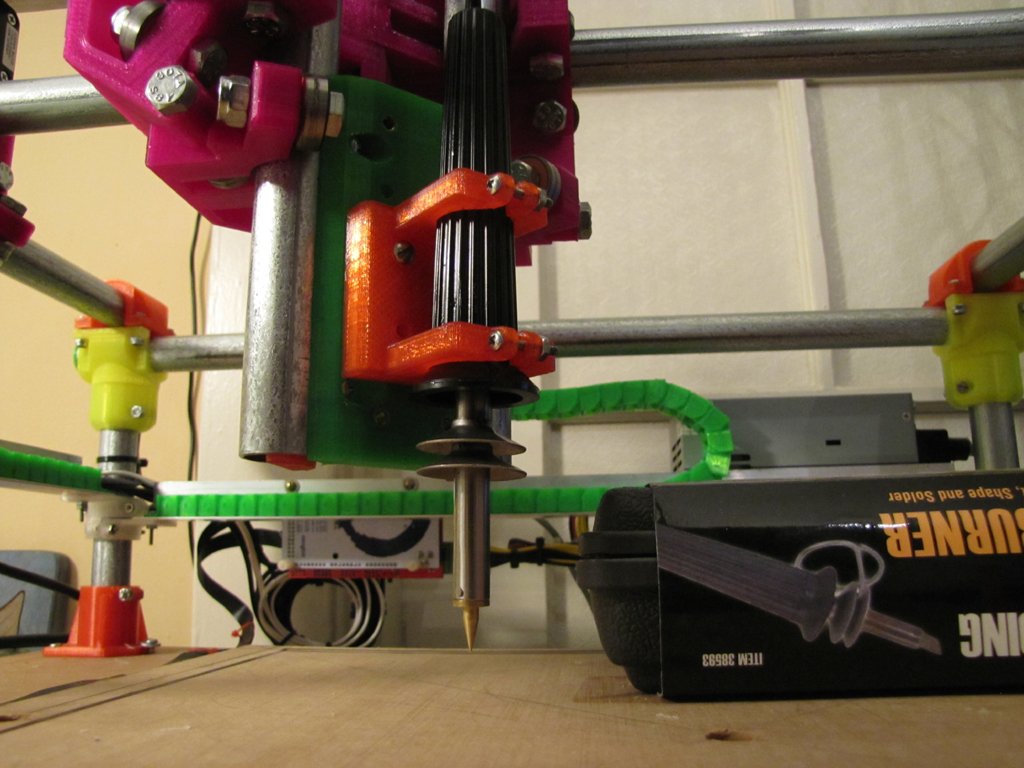 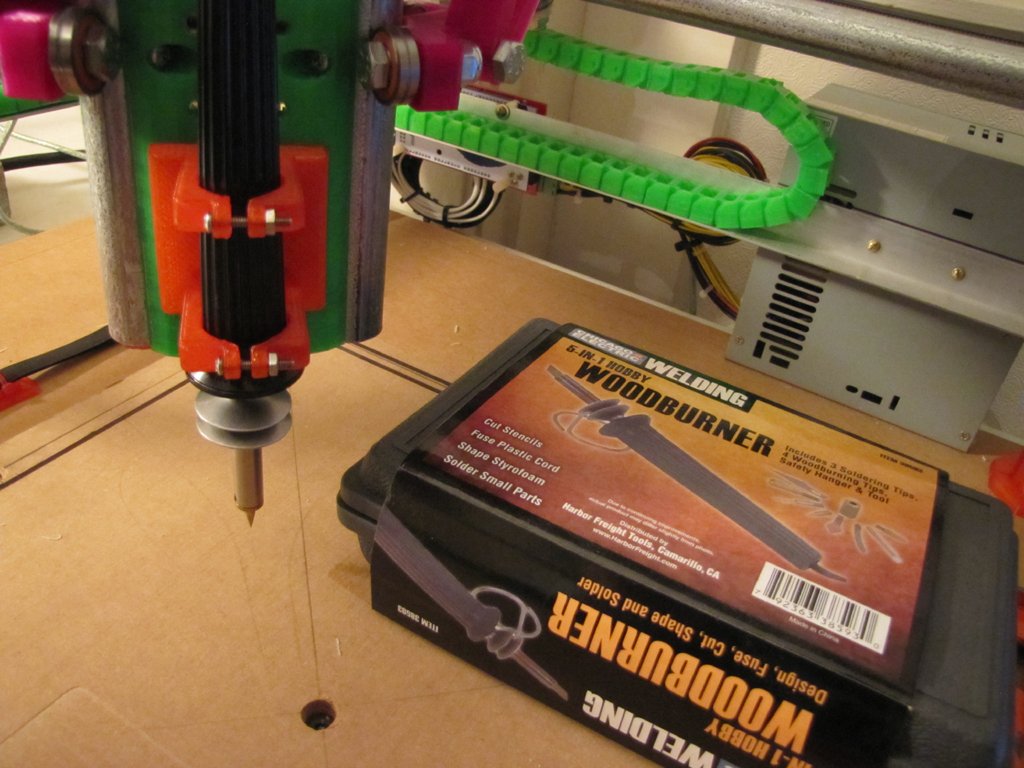 Can’t wait to see some more woodburning projects, the gallery desperately needs them and as a kit I had a woodburning kit so it has a special place in my making career.