OK, at Paul’s request I’m starting this thread. Just to elaborate from my other “Build” thread:

I’ve been an active pilot for 35 years and a Flight Instructor for 27 of those years. I was also a Designated Pilot examiner for 4 years, now retired. I have 6250 hours in airplanes, 5170 of that is dual instruction given (in 47 different airplane types). For the gliders I have 835 total hours with 314 of instruction given, in 27 different glider models.

So, here again is my current glider panel: 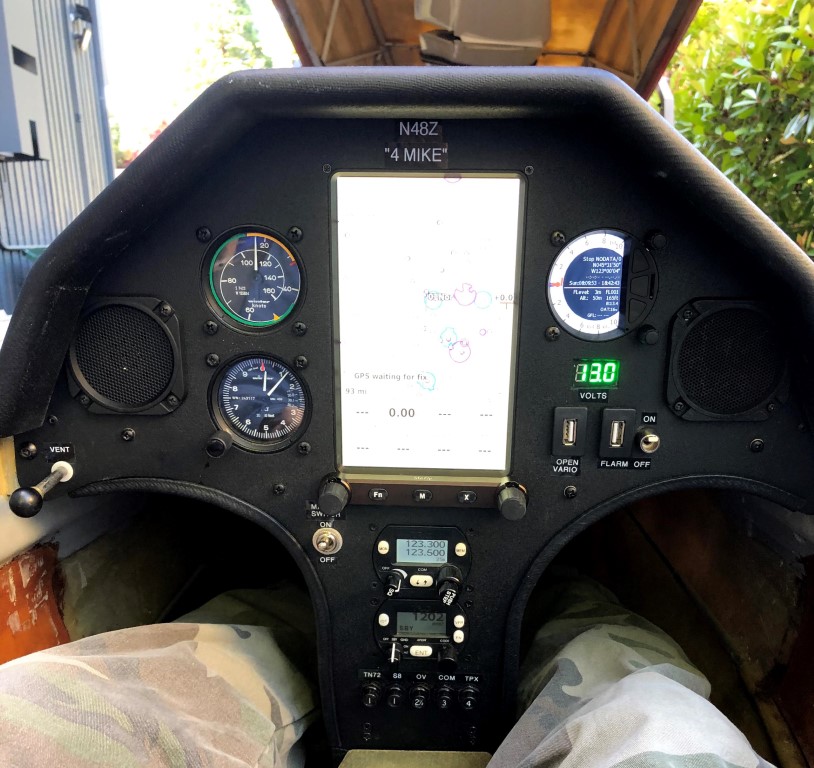 It is installed in a Schempp-Hirth Mini Nimbus, 15M span, fiberglass glider, manufactured in 1979. I have owned it for 4 years and have done a bunch of upgrades, including the panel.

The panel is made of a multi-layer fiberglass panel that I layed up on plate glass using vacuum bagging to get a high glass-to-resin ratio. The panel was then cut on a CNC machine and has been modified by hand several time since. This is the current incarnation.

On each far side of the panel is an audio speaker: one for the radio and one for an audio Variometer (sensitive vertical speed indicator). On the left side of the large display are the standard Airspeed indicator and Altimeter, in 57mm size holes. On the right of the display is a digital air data computer with a graphic screen (brand LXNav, S8) that displays various pages of data, including the Variometer data. It is also the source for the audio Variometer output.

Below the large display are two radio instruments: the top one is a radio communications transceiver and the lower is a Transponder with ADS-B positional data transmission (traffic awareness output).

Behind the panel are various electronic black boxes to support the radios and displays. One is called FLARM, which is a specialized system for glider traffic collision avoidance. It also has input for the ADS-B from airplanes in the vicinity. That data is displayed on both the S8 and the large display.

Now, about the BIG display: it is an OpenVario Flight computer system with a Linux OS running a open-source soaring navigation program called XCSoar.

It’s all open source from the hardware up to the main display program. I built the hardware from a kit and have interfaced all the various bits together with help from the OpenVario community.

Alright, that’s probably more than enough for a first posting

What else do you want to know?

What else do you want to know?

Just because I’m curious, total loss electrical or some means of charging? If total, how much time on a charge running the whole show? Just amazes me how far beyond steam gauges things have come in GA aircraft.

When I first started using the panel, I installed two LiFePo 12 Ah batteries, switchable one , either, or both at a time. I rarely needed to use the second one and only if I flew for more than 4 hours. I have since set the system up for only one and so far have not needed the second. As you can see on the panel, I also have an LED voltmeter so I can monitor and reduce the load if I need to.

As you can see on the panel, I also have an LED voltmeter

That’s what prompted the question.

I usually only had a NavCom and Xponder and maybe an ADF at my disposal so all these avionics are strangers to me.

Are you in an area with mostly thermals, ridge lift, or? 4 hours possible on one tow on a good day or?

I live near Portland Oregon. My local club is mostly flat-land and coastal mountain thermals. One hour east is the Hood River valley, with ridge, and wave activity in the Cascades. If I want to drive 5 hours NE or S I can be at locations that are some of the best for flat-land and mountain thermals respectively (Ephrata, WA, and Montague, CA).

There is an international soaring website called the OnLine Contest (OLC) where most of the soaring pilots post digital GPS records of their flights. Here are some of mine, you can change the year in the upper left to look back through previous years:

The scoring year starts near the end of September, so my most recent flights are scored for 2021.

Click on the “i” on the right side to see details of the flight.

Click on the “i” on the right side to see details of the flight.

Amazing amount of info and I like the ground track and altitude charts. I see a co-pilot listed yet the info I found lists the MiniNimbus as single seat? And I saw the name VanGrunsven

I had the pleasure of making my (so far) only trip to Kitty Hawk in an RV-7 and getting a little stick time. Amazing combination of rock solid stability along with great responsiveness, easy to understand why RVs are so popular. Thanks for posting that web site, I’m sure the more I look the more info I’ll find.

Dick lives about 3 miles from me and we have been friends for over 30 years. We flew in his Arcus in the regional about two years ago and took first place. We also fly locally together. If you saw a copilot entry, check the glider type: it shouldn’t be the Mini. It’s probably his Arcus.

If you saw a copilot entry, check the glider type: it shouldn’t be the Mini. It’s probably his Arcus.

Yeah, I was looking at 2018 flights and failed to notice clicking on copilot changed the aircraft type.

Very nice. I’m currently building up a Glastar. Not much need for the CNC yet… Rivets!! Yuk. 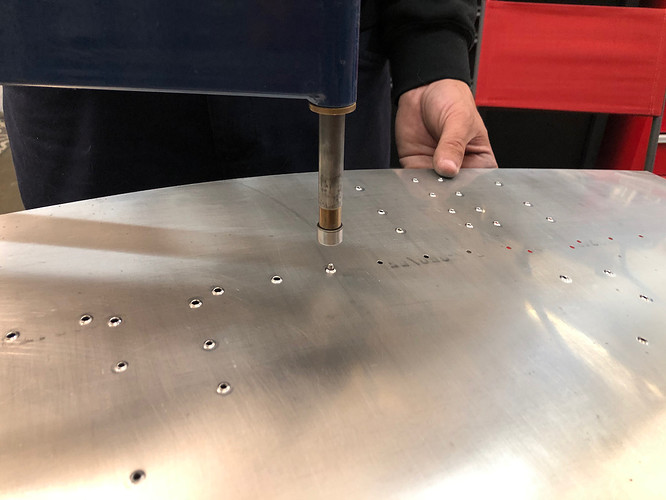 Can’t wait to get the instrument panel.

I still have the Mini Nimbus, but recently purchased a Schleicher ASH-26E self-launch glider (motor glider).

I’ll get some panel pictures the next time I take it out of the “box” (trailer).

I hope to be flying it sometime in the next two weeks, if the weather would only cooperate. We currently have 1/2 inch of ice on the ground over 3 inches of snow. A rare condition for the Portland Oregon area.

We’ve got more like a foot here in The Dalles, supposed to get another 4" yet today before it tapers off. Do you fly out of that glider port in North Plains? I used to live on the airport the other side of the freeway.

Yes I fly from the North Plains glider port, when it’s open. I hope this year we can open before the end of March.

I also fly nearer to you , at Hood River. I had some great wave flights there last October and November.