Grand plans for an update... not so much. *LR2 Released*

I have been sketching and compiling things I have wanted to change about the LowRider CNC since I first used it (as I do with anything I touch).

A few weeks ago I had what I thought was a comprehensive sketch of everything I could tweak to my liking. I then took the parts out of the store, thinking this will be easy and ready to go in no time. Well dang it, as I started to make changes and test parts separately it was looking good. As I started to put it together as a full assembly I started running into issues. I design function first, and as I tried to “fix” some things I didn’t like about the OG design, turns out I did them all initially for a reason. This attempt has much longer than the original designs did, such a bummer.

I started changing to make parts work well together…I ended up with an extremely similar design. So I am announcing my defeat of a game changing update. I need to start over and just optimize what we already have with a few things thrown in.

Apologies for the delay, just an update. Doing my best to get this done before the PID parts get here.

Sad to hear it hasn’t worked out, what particular problems were you trying to eliminate?

I was just going for a full design change. Same thing happened with the MP3DP, I am happy how that turned out, so hopefully the LRCNC goes the same way. Just improve everything a little bit. I worked on it all day on and off, so far so good.

I’ve refactored a lot of code. There are a couple of times where I’m not sure it was really better afterwards. Thinking about it still stings a little.

I’ve refactored a lot of code. There are a couple of times where I’m not sure it was really better afterwards. Thinking about it still stings a little.

Me too. There are some times where “working” is good enough.

There was some code that detected lane markers from a mono camera that I worked on 10 years ago. It had a long section for detection on the left side, and then the right side, and I was sure it would be easier if it just looped, and had an is_left flag on the left side. Man, it was a mess afterwards. There were so many subtle changes for the left that it was just really a pain to read after. Before wasn’t great either, and there were a few bugs in one side and not the other, but it’s weird that I still remember that refactor with such detail.

That is what it feels like. So the “new” parts will be slightly optimized for production and rigidity, lighter, less parts, optional 10mm belt, optional vacuum boot (different style). Makes it a little tough to get back in it and finish…

Okay. Hard to get the motivation to finish but it is getting there, Maybe I just wrap it up, test it, and keep sketching other revisions. Instead of banging my head on the desk. Biggest difference is single side plate, makes less total bolt length and less printed parts, in turn a little lighter.

I haven’t used the original, but the optional vacuum boot sounds interesting, has that worked out?

(and I hope hope I don’t come across rude by asking!)

Th original has worked fine for me but others have had issues. So know I will have an option. The new one looks promising, but I have not assembled the entire machine yet.

Well, there’s more than a good chance the original will work well for me too

When do you think you will have lowrider kits available again ? I am visiting the US in 7 weeks so thinking of bringing a kit back to New Zealand.

Sorry to hassle - but are you intending to put Low Rider parts back into your store (current or new design) ?

I am in the US in 5 weeks and keen to order a full kit - I need everything as don’t have an existing cnc or 3d printer.

Sorry, doing my best. I had a set back and need to redo a few things.

+1 for looking to order a new full low rider kit…

hopefully inspires you ever so slightly to keep pushing forward!

looking forward to seeing it!

Thanks. I actually am working on it. I have a new vacuum port I need to try but don’t have a LowRider right now. So I have to finish this thing up ASAP.

Maybe I went too far. 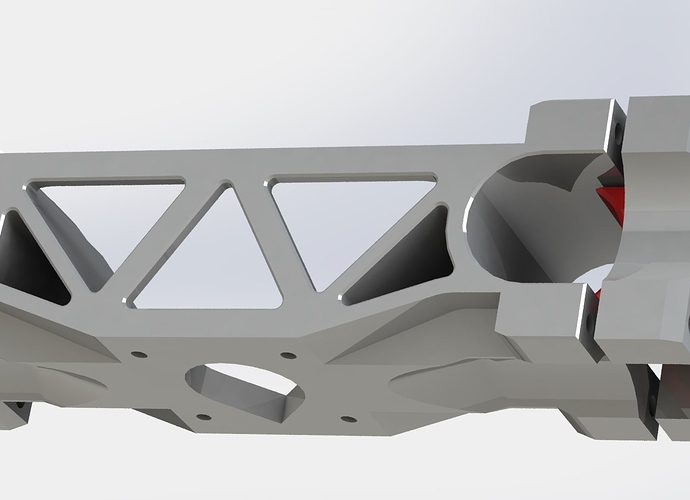 Just imagine it with the transformers sounds.

It hasn’t finished printing yet, so I am not sure if it is strong enough but I spent way, way, way to long thinking about it for it not to work.