Hi, does anyone tryied to run grblHAL on SKR pro 1.2 yet ?

Thus, soft TMC2209 UART are not supported yet for that driver but support exists for other board.

I’ve created a feature request for it and i had a positive response of the developper for adding that support soon.
He will not be able to test as he doesn’t own that hardware, but maybe some of us would be please to give it a try…

Dual axis for X and Y and auto squaring on SKR PRO 1.2

Hi, I have an MPCN running on SKR pro 1.2, motors runs onto 5 TMC2209 in UART…. CNC is using a Neje PWM diode laser mounted on it My machine has dual axis on X and Y, using respectively E0 and E1, and has 2 endstop on X and 2 on Y for auto squaring homing. I'm currently using Marlin 2 but i would like to migrate to grblHAL. The thing is that i'm completly lost and i have no clue of where to get start to make corresponding setup in configuration files before to go to compile. Any a good soul here to help me on it ?

I’ll let you know when any progress will be made on this.

I am using grblHAL on the Teensy 4.1 platform using Phil Barrett’s breakout board (on Tindie). This works great for auto squaring with independently driven X1, X2, Y1, and Y2 steppers.

Yes i saw that board and your big speed up topic, its very interressing but i already own a skr pro with TMC2209 and i wish i could reuse it at no cost.
Right now i only use a Neje laser but i’m not glad with engraving on Marlin(but perfect for cutting), goings and comings engrave more deeper on borders as Marlin doesn’t reduce pwm near movement changes.
I think GRBL doesn’t suffer of that.

External TB6600 would be a huge change on my setup…but i’m curious, are they quiet ? i cannot not support anymore loudy drivers.

Also would you mind to share your my_machine.h and other .h you might adapted for your machine ?

I know nothing on grbl and if by any chance support for skr pro Tmc2209 uart would be added soon i would be quite totally lost on what config to apply before build it for testing.

Marlin does have that, maybe it needs to be enabled again. The laser stuff just got reworked by thinkyhead and gang, so now we need to do another round of testing to see if the changes still work.

External TB6600 would be a huge change on my setup…but i’m curious, are they quiet ?

I have not noticed any loud sounds from the steppers and no sound from the TB6600 drivers themselves. These are cheap drivers, though, and I am sure there are more expensive ones that make stepping quieter.

Also would you mind to share your my_machine.h and other .h you might adapted for your machine ?

Terjeio of GrblHAL has just added support for TMC2209 uart, that was quick !!

I will try to test it this week. In the meantime if other people, more skilled than me, also want to give it a try do not hesitate

An update as grblHAL finally loads well on my board, TMC2209 uart are not working yet but grblHAL on SKR Pro is already a great news !

Getting TMC2209 working on SKR PRO

Hello everybody. I have a SKR PRO board that I wanted to use for a small CNC …router project. I've been trying to get the trinamic TMC2209 drivers working for the past few days to no avail. The first thing to fix is the if statement in the interrupt file in the software uart timer interrupt (the handler is not included for SKR PRO, just SKR 2). Secondly, I'm not sure if I am somehow special, but my board has an 8MHz crystal on it, yet the firmware forces HSE to be set to 25MHz. Ok, those two things are easy enough to fix and that is not a problem. However: The firmware does appear to be able to communicate with the drivers through UART. I'm getting the message: Warning: Could not communicate with stepper driver! Removing the requirement of the attempt succeeding in the trinamic_drivers_init() while loop, therefore causing it to attempt to communicate with all the stepper drivers, not just the first one, I see that all of them fail, outputting the same message 3 times. Tracing it further I noticed that in tmc_uart_read() it sometimes passes and reads the data properly, sometimes times out. Looking at the UART line on a scope confirms this, I can see 5ms gaps in the data transfer (reffering to the 5ms timeout period). I can also see that since the connection on the microcontroller side of things is through a 1K resistor and there is a 20k pulldown resistor on the TMC2209 module itself, the high voltage level when the microcontroller is in control of the UART line is lower than when the TMC2209 takes control of the line. I can use this to differentiate when one or the other device controls the UART line and this is apparent on the scope as well. However, it seems that the driver is not always responding, sometimes I can see communication from just the MCU. I haven't delved deep enough into the code just yet to know what data to expect to read going in either direction (or exactly how the single-wire UART on the TMC2209 works), so decoding the UART signals doesn't provide all that much value at this point in time. In the TMC2209_Init() function it returns true (1) if exactly 7 registers have been read (as far as I can tell). Placing a breakpoint at the end of this function, I can see that sometimes it fails the status register check, sometimes it passes and gets to the end of the function where it has managed to read a random number of registers (0-7). That is about as far as I've gotten. To rule out a hardware failure, I quickly flashed klipper (a 3D printer firmware for those unaware) and managed to confirm that klipper is able to comunicate with the drivers just fine with no hardware adjustments. I did use the direct path to the GPIO pins of the microcontroller (not through 1k resistor) for the klipper firmware, however I did also try that on GRBLHAL with no success. Anyone has any ideas on what the cause might be and where to look? Tracing all of the trinamic code to figure out what does what and how would take days for me and at that point it makes more sense for to just use the drivers in standalone more. Might be able to figure out what is going on with some pointers though. Also, if there is something that needs testing on the SKR Pro, I would be happy to help. 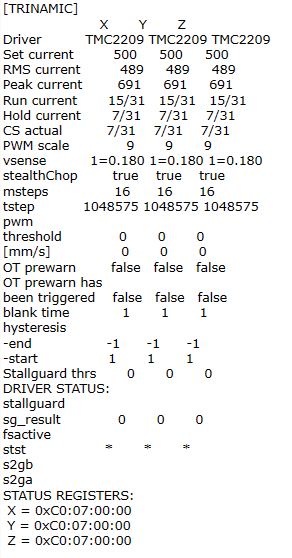 I did “my best” last 15 days in testing/reporting grblHAL terjeio’s live modifications for that board but now it’s here i feel like an idiot.
I am a real newbe on grbl, so much to learn to get start(current, step/mm settings…), so any more skilled tester would be more than welcome …