So, I’ve stepped up the ambition level and modeled a couple of guitars (a Gibson SG and a Fender Telecaster to start). I grabbed some top choice 2x12 from Lowes for some practice runs and below is how far I’ve gotten. 2x12 is not wide enough for a full size SG so I scaled it down on just that axis so you understand why it’s a little disproportional in the pictures.

Anyway, the first tool paths came out like a charm (the holes for the control knobs, tail stop, bridge, pickups and neck pocket) but about half way through the first pass on the body outline it started hick-upping and then got worse (ultimately the spindle assembly dropped into the wood, it wiggled loose under the Z-Motor mount).

I’ve since put a M3 screw through the Z-Motor mount into each of the upright pieces of conduit so that shouldn’t be an issue again but it doesn’t address the cause for the hick-upping in the first place. I assume it’s because I was being a bit over aggressive in either/both my speed and/or depth per pass (400mm per inch (should be good in soft pine) and 11mm depth per pass (this one was probably over aggressive)). To offset the 11mm depth, I was using the trochodial method in ESTLcam and in the tool-tips Christian said that 2-3 times tool width can used in metal so I figured with a 1/4" (6.35mm) tool, 11mm depth would be OK. Looks like I was mistaken.

Does anyone suggest I change anything else besides depth per pass before my next test? 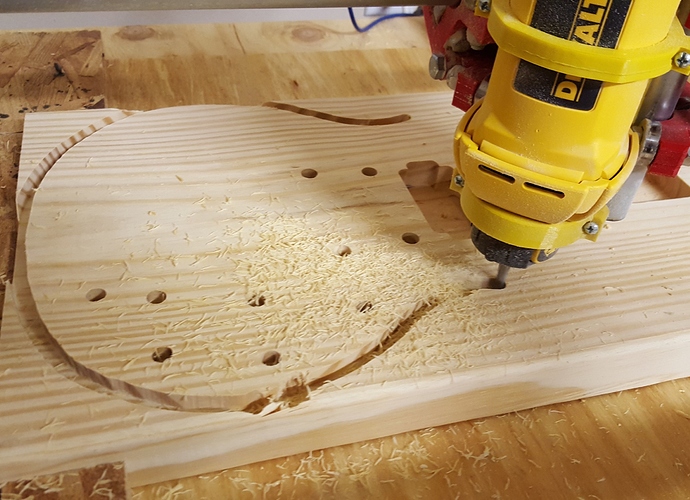 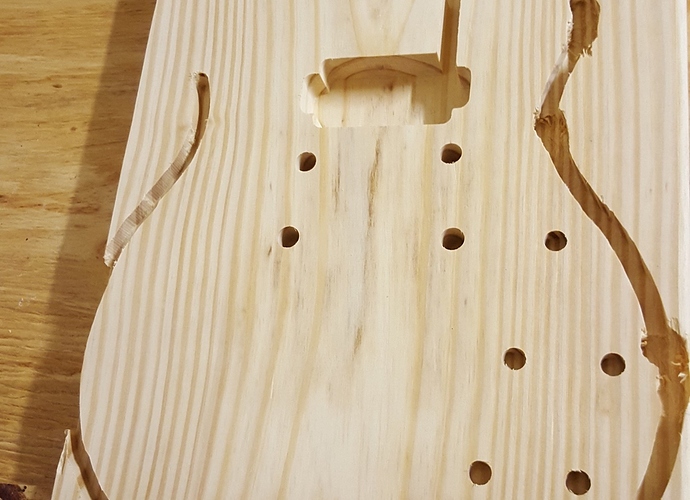 1/8" bit has a much lower load on the gantry. You should get better results compared to a 1/4 bit.

Trichoidal might be a waste of time on wood. Probably faster just to make a few more shallower passes. A really deep pass put a high load on the bit because it is trying to push the chips/waste out at the same time it causes it to get cut again. So you end up re-cutting chips. I just did a 1" deep walnut block and used a 1/8" at 3-4mm per pass 15mm/s no issues with a 2.5" zaxis.

Your z axis is also hanging really far out. You will gain a ton of rigidity moving the block up on some spacers or shortening the legs on the machine.