Has anyone tried this on a lowrider?

I presume you are talking about the mount and dust boot? I’ve seen a few similar and am trying to track them down - the last one required a wider plate.

I hope to be sketching a few solutions for discussion over the next few months - but I am very reluctant to suggest “improvements” until I’ve actually got my machine running and discover whether they are needed!

I’d go as far as to say that despite my misgivings from first appearances, there is obviously not a long wrong with the standard setup as it’s been in use for quite some time and I don’t see any threads devoted to improving it.

I guess the first question one should ask (and it’s been asked before but I haven’t seen a reply) is: Why not just use the factory Makita connection? It’s simple and straightforward but dissapointingly requires no printed parts.

I’m happy to blindly “follow the plan” for now, but the deWalt that it was designed for didn’t have a factory connection, so I can’t help but wonder if it’s at all necessary for the Makita?

It would be nice to hear from someone with a few hundred hours of Lowrider time!

Apologies about the delay , i was referring to the overhead vac hose , I should have been more descriptive in my initial post , apologies for that.

Sort of. My vac hose drops down from the ceiling. I have a shop vac at one side of the shop that plumbs into 3" PVC that goes along the ceiling to the other side and then has a drop above my CNC. It’s crude but effective

I bring mine from overhead but its suspended from a strut hung from my garage door tracks. I like not having the vac hose running on my gantry. In the example you referenced you dont have a choice anyway.

It’s hard to tell if the arm is designed to swing or the pipe is fixed in the center of the machine.

The trick with swing arms and cables is when you move straight in the direction of the arm it takes more force to make them pivot. As long as there is enough slack in the hose this shouldn’t be an issue.

If it’s fixed you might want to consider completing the bridge by replacing the elbow with a T. and running the pipe all the way across and back down the other side with a cap on the end. Theres all kinds of useful stuff you could attach to the pipe if its stable (Control Panels, Emergency Stop Buttons, Router Wrenches etc) You could also use it as a tent ridge beam if you want to keep the dust contained even more. If you wanted to get really fancy you could set up a couple of blast gates and hook up the other end to an Aux hose for post job cleanup.

could you send a picture of what it looks like connecting to the router plate? Im looking for the best way to do it that puts the least amount of strain on the router plate and x motor

I have an aluminum x plate and just epoxied on some pvc that the vac hose connects to. The hose makes an S shape as it comes down from the ceiling and then I go the lowrider so there is very little load on the router carriage itself. You can see the interface on this image. I can send a picture of the other end later if you want. 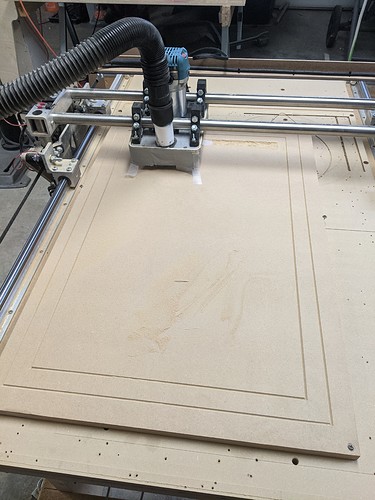 thanks for this , this is exactly what im looking for , if you wouldn’t mind i would love to see the other side.

Excuse the mess, I’ve been trying to get 80 pumpkins cut for a local school and a coffee cabinet for my wife at the same time

You can see the shop vac at the far end, through a dust separator and into 3" pipe along the ceiling. The small rope on the drop hose just stops it from wanting to pull off the coupler. I swap hoses when using a track saw on the ground 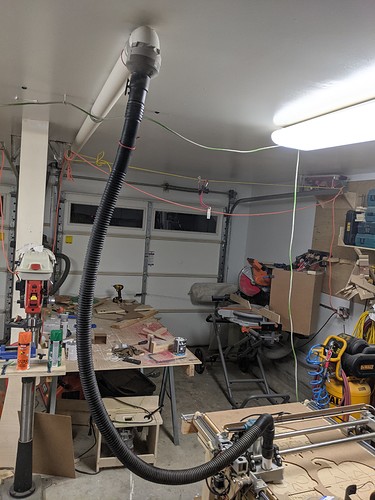 @RobP , what size is your dust extractor, and how effective is this set up as far as the LowRider goes?

I am trying not to think too much about this until it becomes a problem, and am planning a stock set up with what I think is a 1 1/2" hose for starters, I will definitely swap that out for a 2" in short time, but it also wouldn’t be a problem setting up like you have.

Thank you for this , it is very helpful!

It works very well, I don’t use the dust shield that Ryan has in his kit, it’s literally just a hole straight through the x plate. There is a bit of dust left on the table but it’s easy to clean up afterwards. I never ran the stock setup so I’m not sure if it’s better but this works plenty good for me.

I use this shop vac

And then a cyclone prior to it. When cutting MDF the really fine dust still makes it to the shop vac but I just clean the filter every few months.

The pipe along the ceiling is 3" sewer pipe because it’s the cheapest around here. I would keep the hose to the machine relatively small to keep the air velocity high.

An exhaust muffler on the shop vac is also a game changer in terms of noise.

Thanks @RobP - that’s another rabbit hole I don’t have to run down!

What muffler did you use, and how much noise does it reduce 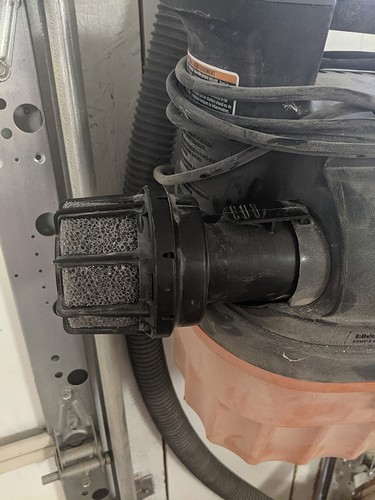 Looks like this, knocks off 2db more importantly the pitch is reduced. I still wear earmuffs but its more pleasant to be around