Heat a bolt if the tube is too tight

In a recent post @markal, from S. Africa, only got 25.4mm OD tube, and the plastic is in ‘suffering’.

Idea:
1 - After the XY axes are built
2 - With these tools http://www.thingiverse.com/thing:1563870
3 - I guess if is possible to heat specific bolts with a soldering iron, in order relieve the stress from the bearing/plastic/tube?
Is a risky operation

My build is totally in ABS (a challenge to print), and all OK for now with XY. Steppers wired in series and can go up to full 2A: Higher torque until 10-15 rps and then looses to parallel, but that means speeds in excess of 380 mm/s with a 16T pulley!

Bye and thanks the community for making it real!

I would imagine that if you just touched the end of a bolt with a soldering iron the heat might stay near that end of the bolt. You might not get the whole thing to shift down evenly. Thinking about it, that shouldn’t matter much with any of the older part styles. No clue about the new center though.

What is the stock pulley for MPCNC? Whatever it is, I have no trouble running at 825mm/min with a single flute 1/4in router bit with step downs of 3mm.

380mm/s comes out to 22,800mm/min which seems far too fast for any cnc machine, let alone the MPCNC.

Yep, even using two soldering irons would be a risk; if it was the only chance, i.e. 25.4mm OD maybe wold take the risk… slowly.

Steppers at these speeds are torquier in series or parallel?

The center assembly is great. Maybe because ABS, the bearings secured by the main vertical bolt tight a little bit the tubes, but don’t’justify at all the iron method

Thanks for the feedback.

The centre assembly I have printed is the new latest one which is very comprehensive and well designed. Went together like a dream, but it does not, however have any ‘give’ to bluff the oversized stainless steel. While the Z axis can be ‘forced’ into accepting the oversized steel, the X & Y portion does not have any give. Forcing the steel in is what I think Allted refers to when the alignment is out. It is surprising how much deflection there is for a mere 0.4mm extra diameter. You do not feel like you are forcing it, but you can see the bearing arms physically and visibly deflect, so you know there has to be a consequence for that deflection.

I am gambling on there being no nasty “side effect” from tolerances, and hoping to track down a 8.4mm drill bit which will then give the 0.2mm extra clearance per hole if I assemble and tighten with the steel in place.

I found a company here in Cape Town that does a vast range of HSS drill bits, I needed one to drill out the heat-sink for the 2.8 Watt Laser (L-Cheapo - The assembly stated it needs a 7/32" or 15/64" drill bit which is only 6.4mm which is WAY too small.) and ended up buying an 11.7mm HSS drill bit (9/16"). Horridly expensive (as much as a 6m length of 308 25mm stainless steel), but did the job. I will go through tomorrow and see if they have anything to allow me to drill out these bolts holes, and hope that the PLA is forgiving as I know it does not like to be drilled.

If that works, then I will try and sand out the leg brackets which I see in another post that someone made there own sanding drum to do this. Other wise reprint at a scaled up size.

Thought it was time to take photos. Sorry, I do not know how to put them in order with the text.

Here is a true thing of beauty. The center assembly loosely put together. Printed in eSun PLA+

I measured with my vernier to see the amount of deflection on the Z tubes and as you can see, almost a mm deflection of the arm.

Back view also shows how the arm deflects as it is not yet tightened down. This is the same deflection as with the Motor brackets.

The top view shows how robust the XY holes are, so no room for deflection here. 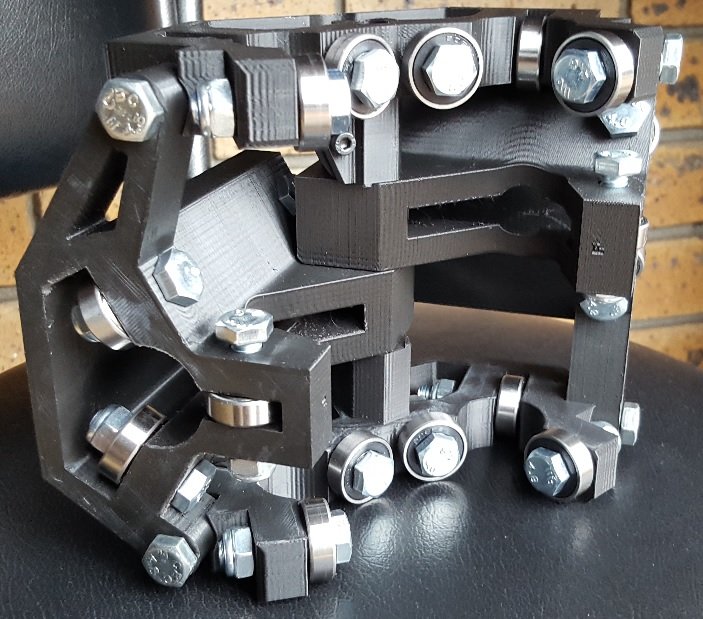 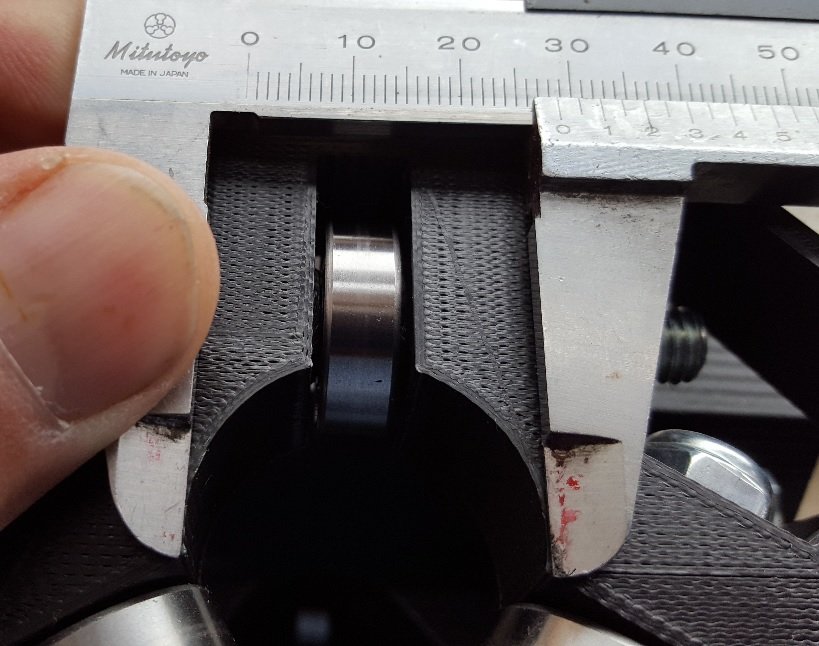 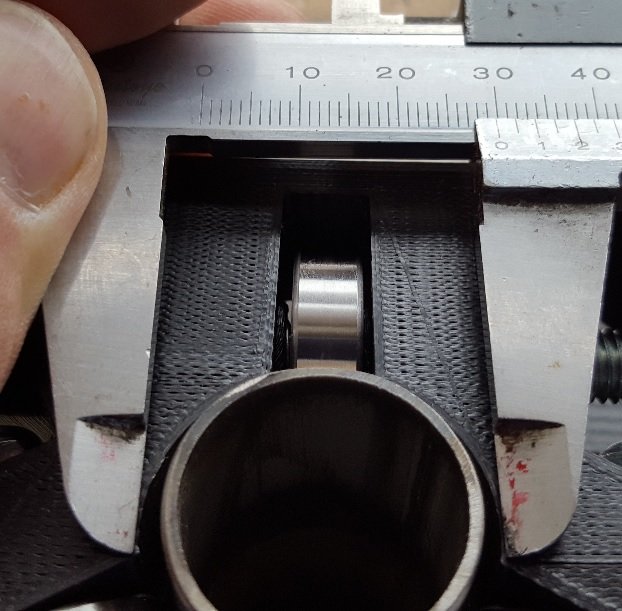 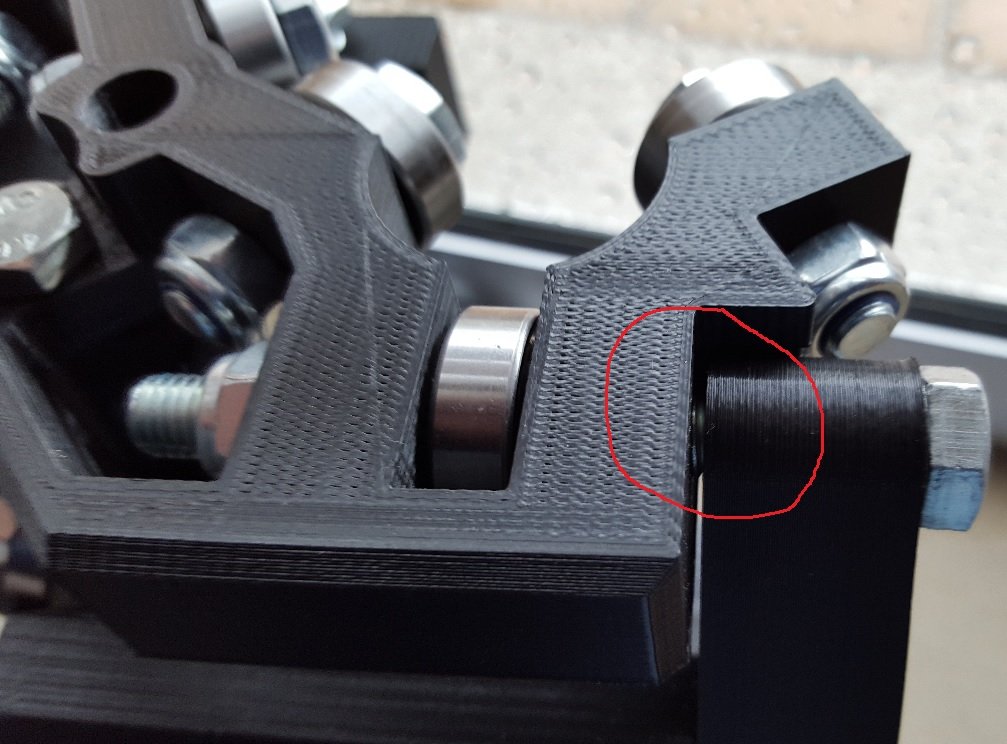 Here are the feet and corners. Again, the PLA is not happy, look at the deflection of the slot and I cannot get the steel in to full depth. (Obviously)

The corner brackets you can get away with as they are a snug fit, but the bolt holes all line up. (Used the short lengths of steel just to mock up for the photo.)

I did not think that 0.4mm would make so much difference 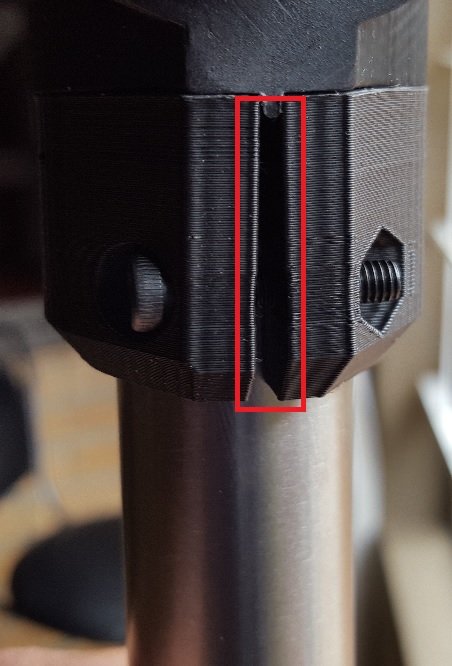 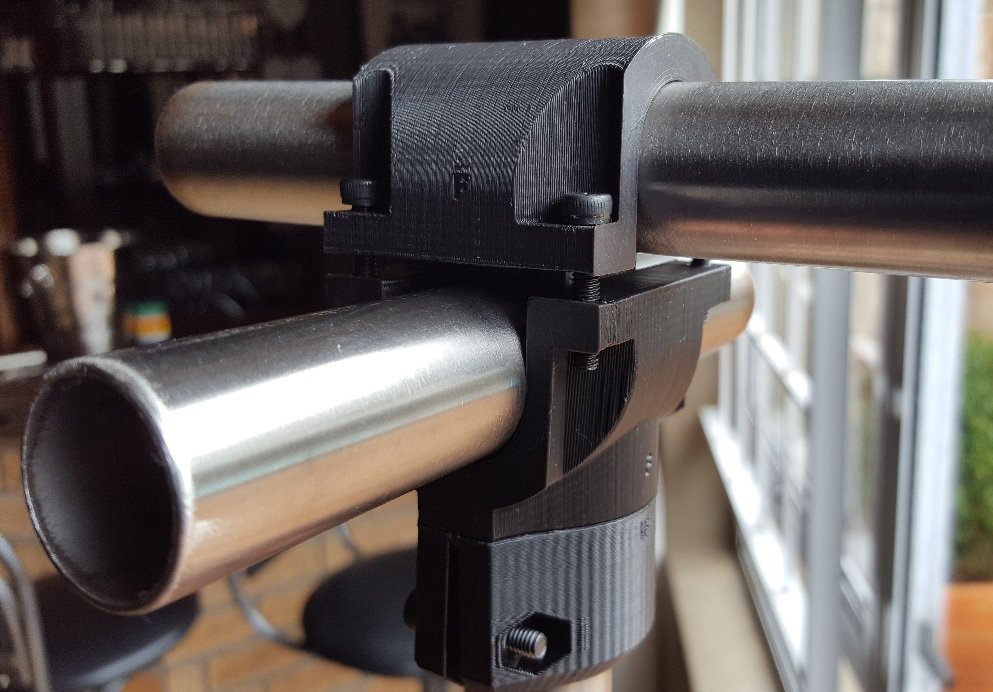 Things like the feet and corner brackets shouldn’t be too hard to sand for a slightly larger diameter. But parts like the roller f and the center assembly were designed with a specific diameter in mind. It might be easier and more accurate to find a way to bring your pipe closer to the intended diameter.

Looks like U have a big problem markal. Is pratical have the tubes from Angola? I’m sure they deal with metric system. Pls keep us updated. Tks!

The problem with heating the bolts is you’ll not be able to keep everything aligned.

Yes Barry. It was an idea I had because printed in ABS and looked tight (it was just fine tune needed). I thought, if heated slowly, the most stressed plastic would go first. But maybe should be better drill bigger holes.

South Africa is also metric Rui. Try find any one here who knows what an inch is. Quote them any imperial dimension and you will be met with a blank look.

nerdyrcdriver I have scoured the length and breadth of the land and have had no joy on getting anything closer to 25.00mm. The suppliers are generally too busy (lazy?) to go and find a vernier to measure exactly. The one largest stainless supplier allowed me to walk around their vast yard with my printed parts to try and find something it would fit. Felt a bit like Cinderella and the glass slipper. The same for one of the larger steel suppliers who were quite helpful.

The Aluminium guys are less helpful as they say their range is too huge and the dies belong to specific clients etc.etc. I tried several 25mm aluminium tubes from various sources and all were less than 25mm as the parts rattled around and there would have been no accuracy. As the wear factor on aluminium is in doubt, I choose not to pursue that avenue anyway.

I am banking that there is enough tolerance in the MPCNC design to accommodate the 0.4mm diameter increase in the bolt holes. As I now already have the stainless cut to size and neatly filed down, I have nothing to lose by drilling one of the brackets to see if it makes any difference. If it works, then situation sorted for now, if it goes pear shaped, hey, I get to print another and hopefully, fingers crossed, Allted will take pity on me and release the new international 25.4mm version. He will hear an audible cheer from most of the Southern Hemisphere I am sure.

I will let you all know how it goes later today. Hold Thumbs.

Well, I decided to try a 8.5mm drill bit rather than hint down a 8.4 as I guessed that if one would work, so would the other.

I have drilled out all the holes of the center assembly to 8.5mm and so far it seems to have worked. Still a little tight but the stainless will now at least work in the X & Y channels where as before it would not.

I tried with the pedestal drill but found the drill bit tended to grab the PLA when pulling the bit out and skewing, so I switched to my faithful cordless and on low speed, drilled each hole out, carefully reversing the drill to take the bit out. The PLA and the PLA+ both seemed to tolerate this and a small amount of tidying up with a needle file was required. (I printed the parts with 3 outer layers if that makes a difference to the success of the drilling.)

There were 4 holes in the assembly that were drilled, but when putting things back together I realized would not make any difference as the bracket coupling up to it would need drilling as well which I have not. I am hoping the other 2 bearing holes being drilled will be enough. Still some deflection but have not measured it yet.

Not Ideal I know, but hey, what have I got to lose.

I will try taking the assembly to the next stage now with regards to alignment squaring up etc. and report back.

Markal, I’ve just squared mine. I advise U to square it with the tower mounted (don’t need the lead screw) and 4 of these : http://www.thingiverse.com/thing:1563870.

The tower squares a lot the machine, at lest for me.

Thanks Rui, yes I like those alignment guides and will print myself 4.

I have found one of my Roller assemblies has split, for no reason I think than the print failed for a line. I was experimenting the concept of a little wipe of oil to lube the nozzle, but think I ended up contaminating everything. Thought it was only the outside, but when drilling the holes out, I found the whole layer had pretty much given up so my nice solid piece became two smaller nice solid pieces. Will reprint in PLA+

I tried to print a 25.4mm foot http://www.thingiverse.com/thing:1083038 from technomastermind as this was supposed to be for 25.4mm but I found it also too tight, as tight as the original feet I printed, so wandering if I need to re-calibrate my printer. Will print a quick calibration cube and check before I reprint the roller.

Markal: I redid the foots… taller. Hope thre’s no problem to send you a 25,6mm hole file. If you need any change say.

Nope. I have printed the calibration tester in PLA+ perfectly. (http://www.thingiverse.com/thing:1363023) I measure 100mm across the points as it should be, and 5mm hole is 5mm. All the shapes and everything else printed perfectly. I also printed a 40mm cube, and this too is perfect in all dimensions.

I am going to reprint the roller that failed, drill out the holes again to 8.5mm then try scaling the feet to fit the tubing.

Whoops, Sorry Rui, in posting the last message, the page updated and I see your message and file for the 25.6mm foot you posted. Thanks, I am down loading it and will try it out and report back.

First prize. Thanks Rui your 25.6mm foot fits the tubing perfectly, like a sock on a chickens lip.

Now need to address the opposite end, the lock corner. Do you think that adjusting the scale and reprinting is the best way to go, or should I rather sand the old ones out? (Do not cherish making a plan and that extra labour to be honest and leaning towards re-scaling) I am guessing they will protrude slightly below the bottom corner piece. Going to try one at 1.02 scale.

Cool Markal. I guess you could file/sand some parts and scale others. Roller and center no sanding possible.Good luck mate!

Thanks, once I have the feet sorted I can test assemble and see if the mod to the centre assembly has worked or not. I have the replacement roller on the printer now, will drill that out when its ready and then print the other 2 of your feet.