Can anyone recommend a good bit for cutting 5mm carbon fibre sheet? I’ve found a few old threads but they link to ebay items that no longer exist, so there’s not even a photo or description.

What speed and DOC is recommended? I’d guess I should try for a full depth cut, to spread the wear over more of the tool and not just use the end - is that possible?

I’ve been using the machine for a while, cutting foam board and balsa model planes, wooden signs and lately 2mm glass fibre sheet for quad-copter frames (with a 0.8mm single flute bit, at 3mm/s, full DOC). They all came out nicely.

Now I’m trying to cut the arms for a quad-copter frame, from 5mm carbon (actually a carbon/glass/carbon sandwich, thanks to a slightly dodgy ebay seller). I’d read about the danger of carbon dust and set up a water bath, using an old oven dish. 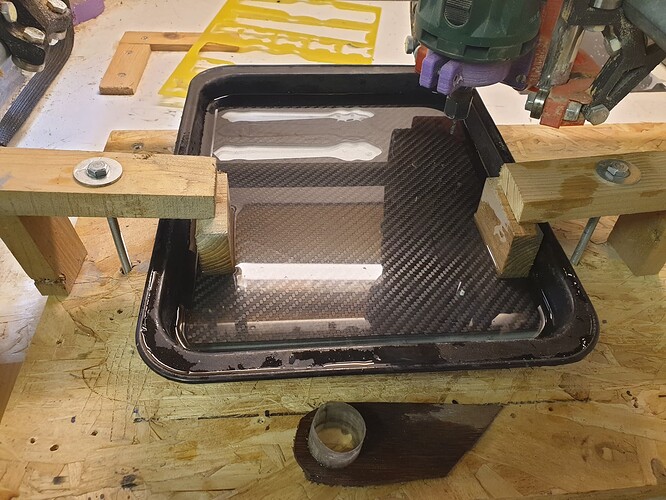 The first problem I hit here was clearance - the Z-assembly would hit the side of the bath before the bit would reach the carbon - so I packed the carbon up on a second layer of 6mm Depron foam (I had been planning to use one as a spoil board). I still have to wind the router right up to get it in or out of the bath, but it can now reach the work. The next problem was clamping. As you can see, the clamps have to reach over edges the bath and down to the work. This makes them very tall, and restricts where I can put them. I should probably cut the bolts down a bit, but I still can’t get them anywhere near where I’m working. I’m not sure what a ‘good’ setup looks like - any advice?

At the bottom of the picture you can see my anti-splash device. I was worried that the router would spray water everywhere like a sprinkler, but it was little more than a mist - however after 10 minutes of cutting everything was covered in droplets of dirty water. I struggled to think of how to prevent splashing, as most solutions were too large and would hit the sides of the bath if I wanted to cut anywhere near the edges of the carbon sheet.

I cut some clear plastic from a bottle, taped it into a tube and cut a plywood holder. This clears the collect with a few mm on each side. I was a little worried that it would rub and melt, or grab and be spun around, but if I hold it lightly, the collet just pushes it around. It’s a bit of hassle to move it around, but not much worse than following the bit with a vacuum, and it does contain the water. I’m sure that could be improved, but it’s good enough for now.

At the top of the picture is the left over glass fibre from cutting other bits of frame, nearly all of which worked first time.

The main problem I’m having is the machine missing steps.

I didn’t think the 0.8mm bit would be strong enough to do a full depth cut, and I’ve read that carbon blunts buts quickly, and that burr bits were recommended, so I bought a pack of PCB Engraving Milling Cutter Carbide Bits 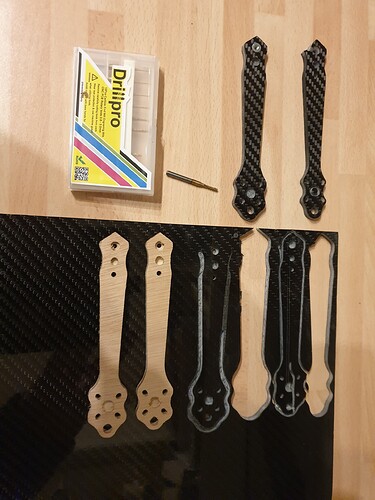 The cuts are in order, starting from the top, or right, as the photo is rotated.

Starting with a 2mm bit, at 2mm/s, 6mm DOC. It made it all the way around, with a lovely clean cut, but was quite undersized, and skipped a step near the end. I finished the cut manually.

I tried again, this time at 1mm/s with a 3mm DOC. It started OK, but skipped lots of steps on the second layer so I stopped it.

At that point, I guessed I either had the wrong bit, or it was blunt already (it still feels OK, but I’m not sure what I’m expecting) so I changed to a 3mm single flute bit that I’d been using for wood. I did a couple of practice runs in plywood that were fine. My first cut at 2mm/s and 3mm DOC went OK but the next one started OK, but dived deeper and started skipping steps when it was about 4mm deep. I’m not really sure what happened here, as there’s a very shallow cut after it stopped that doesn’t quite reach back to the start. That implies that it actually started the second layer, but either the work or the router moved vertically. Of course, the water is too murky to see what’s going on after the first couple of seconds. Oh and on inspection, the larger holes aren’t very circular.

Any idea what’s happening?
Is it reasonable for a carbide bit to be blunt after a single piece?
Are my bits or speeds wrong?

BTW, frame design is here, if anyone wants it:

Sign in to Onshape, the #1 fastest growing CAD system in the world with over 2 million users.

Based on the ImpulseRC Apex, with small tweaks to most parts.

I cut both glass fiber reinforced laminate and some with carbon.

I’m not too worried about the carbon dust as I keep the vacuum running, close to the cutter the whole time. I just don’t get that much carbon dust floating about. I haven’t felt the need for a water bath.

I use a 1/16 inch,single flute, upcut bit, with a plunge of only 1mm per pass, standard speed that is shown in the EstlCAM documentation. I use a Dewalt 660 so I only have the 29000 RPM for the bit.

Try a shallower cut first and make sure the EstlCAM tool description has the same diameter as the installed bit. I would think that an incorrect diameter is possibly the cause for the incorrect dimensions.

Another reason for the cutting difficulty is that the resin used in the carbon laminate may be much harder than that used in the glass one.

Thanks, I’ll try a shallower cut tomorrow, and removing the water bath should fix whatever strange clamping issue caused the last bad cut. A 1/16 bit sounds like a good idea too, less material to remove and it fills a gap between my 1/8 and 1/32 bits.

I also have a single speed router, 27,000rpm. I probably should have mentioned that.

How long do your bits last?

I mostly do glass laminates, but I haven’t changed the bit since I broke/burned the last one on some MDF (don’t ask). So, that is about 20-30 linear feet of cuts in 3 steps to 3mm.

I broke/burned the last one on some MDF (don’t ask).

Thanks Mike, a 1.5mm single flute bit cutting at 4mm/s and 1mm DOC did a nice job, especially after I added a finishing pass to the holes where the diameter is important. Just clamping it to the spoil board and vacuuming was much easier and I can’t see any dust escaping the vacuum, unlike with a bigger tool.

I went for a tool with DLC (Diamond Like Carbon) coating because it was a cool blue colour. In real life it’s so small that it doesn’t look quite as cool as in the photo, but it hopefully it’ll stay sharp longer. 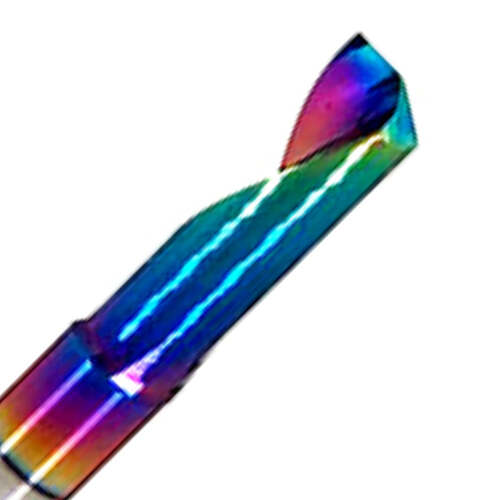 Our DLC coated single flute endmills will give a mirror finish on aluminium and similar materials Also for use on Brass, Copper, Gold, Magnesium, Alloy, Plastic, Acrylic, PVC and other Non-ferrous Metals.. Made from wear resistant Carbide for...

OK, The answer is: I hit a screw first and then the bit tried to keep on cutting. The bit lost.

I did that once with a 1/8" bit, and it just chewed through the screw!

Only thing I have to add is if you stick with the water bath and you are worried about your electronics.
This is a great lil video of a cheap tested way to help. But then all your dust would stick on and pile up. At the shop here we have a down draft table setup for cutting and grinding. Idk if that a option if you could setup a window fan exit and some ducting.

Here’s the first prototype frame, and the second one is in progress. 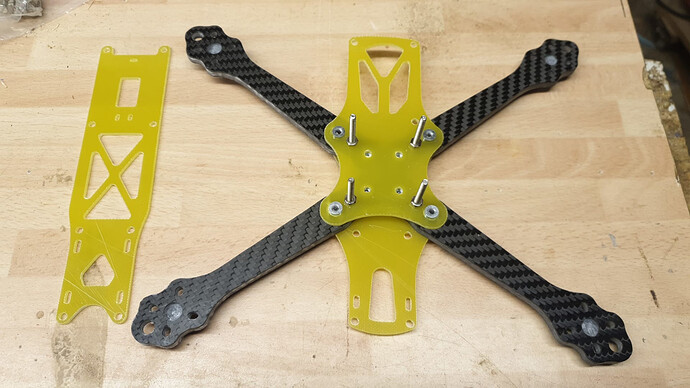 I don’t think the electronics of the router need waterproofing. I was more worried about the fine mist of dirty water over the metal parts of the MPCNC. The router didn’t really get wet, except for the collet.

FWIW, That video had a huge impact on the hobby when it came out. Crashing quadcopters in wet grass or puddles is always a hazard here in the UK. All our electronics get a layer of silicone conformal coating. Next we need tiny windscreen wipers for flying in the rain…