How to build a simple web page?

Now I want to make a simple site for my little business, nothing much, just contact info and a simple gallery. Usually I would set up a wordpress install, but right now I feel like making something simple - but with a decent enough layout. Googling these terms is not a good idea, the “build your own homepage-jungle” is messy…

Does anyone have any experience or good advice here? I don’t want to use a commercial service like squarespace or wix, I just want to make something simple that I can store on my current provider.

For me, wordpress was awesome. You can get a plugin for everything. That is also the issue. Trying to keep up with updates and fixing issues that pop up was insane. Something as simple as a gallery is a pain to maintain. After a while more breaks and more often. Then I got locked into my themes ecosystem and that made it even worse.

For me If I did not have a shop attached I would use squarespace or wix. It seems expensive until you figure in troubleshooting and updating time.

Another huge time suck is multiple server locations and web optimizations, new versions of php, server migrations…for me, squarespace and wix have another vote. They are blazing fast.

If it is really basic I think you can use something like google pages if you bought a domain through them.

I guess as a “homepage powered by vi” person, I guess I’m not the one to ask…

You could do a simple, static site (no Wordpress, Javascript, PHP, etc.). You just need some HTML and CSS knowledge which can be acquired in a day or so.
Here’s a great resources that has basically everything to get you started: HTML tips - Thomasorus

Hosting-wise, I’d get a domain and VPS (virtual private server, $3 to $5/month ) that runs Debian.

WAS awsome is exactly my experience as well. The plugin-bloat, theme-mania, and the update mess, like you describe, is exactly my history too.

Yeah! That’s my thought. But - I’m not confident enough to make sure the layout works well in all sorts of viewports. Something like a Google page would actually work out fine, but I just want to keep it on my own domain, I’m not sure if Google gives out any usable code at all.

But - I’m not confident enough to make sure the layout works well in all sorts of viewports.

Do you mean computer monitors, tablets, smartphone, etc.? If so that’s really no concern, when you do a simple site. Things will rearrange as needed for different screens, if you make a floating, flexible, non-fix layout with CSS.

but I just want to keep it on my own domain

The more I think about this, the more it’s obvious that it’ll probably end up with yet another wordpress install. No additional costs (if I manage to stay away from the theme-mayhem) and very easy for me to set up and maintain. I just have to do all I can to limit the plugins! I like the idea of doing things from the ground up - but it’s not easy to have enough time for everything…

Most basic page ever and very very static

I would stick with WP, even for a simple site.
I currently run WP and yes update & plugin conflicts happen but it’s getting better. I swear

I thought Jekyl was the new wordpress?

Sandify was made in react, using “create-react-app”. I have to install nom and node on my working computer. Then you install create-react-app and run it. Then “npm start” makes a version running locally, and updates as soon as I save any files. If you haven’t played with it, you should.

After a little configuration, “npm build deploy” builds the minified versions and pushes it to a gh-pages branch in github. The github pages hosts my page (which is static, there is no server code running). I also paid for a domain and hooked that up, but I pay nothing for a server and it is as reliable as github.

I am pretty sure you can set up a github repo to run jekyl and host it on github. As long as you don’t get a ton of traffic, it will be free.

It has been a long time since I messed with wordpress, but it needs server side code (php, sql?). Things like jekyl (there are others, we use mkdocs for the docs) don’t. They use the source to build fancy static pages that get copied and are always a static page.

You can do all of that in html and css. But I can’t. Or at least, I’m not willing to. I am also not willing to host any webpage from my house. I just don’t think it is worth the time costs.

Yeah, that’s true. For a VPS, it would probably take you about half a day to setup Debian (Linux), configure everything (i.e. users, security, firewall, ssh, etc.) and setup nginx or apache, as web server that broadcasts your site. You have to be comfortable with the Unix/Linux shell though, since there’ll be no GUI to do all this. There are tutorials that literally walk you through the whole thing.

The more I think about this, the more it’s obvious that it’ll probably end up with yet another wordpress install. No additional costs (if I manage to stay away from the theme-mayhem) and very easy for me to set up and maintain.

You could also setup Wordpress on your VPS and much more (cloud hosting, instant messaging, email server, etc.).

I think $3 per month for a small VPS is not a bad investment for a small business, especially since the free, pre-hosted Wordpress sites are only superficially free. In the end, they collect your traffic data and serve adds on your site, which could potentially distract your clients and steer them to some other product.

Most basic page ever and very very static

I have to take a look at Jekyll! Looks interesting indeed. edit: Well - my provider doesn’t suppord Ruby… I guess I could get a VPS, the digitalocean ones offer hundreds of dollars of credit for returning customers.

But then again: I remember I enjoyed concrete5. A CMS using the regular php+mysql combo, but all the editing was done right in the front end, in a WYSIWYG editor. You simple edited the pages on the go, and it was supposed to have that uniform look across platforms and devices.

Hmm - perhaps I’m going to go for concrete5 then? Ah - all the choices!

If you decide to go the VPS route, I’d recomment Linode or Vultr. Both are very good and have fair pricing. This referral link gives you $100 of credit on Linode for 3 months. You can test and try everything, and won’t get billed. Remember to cancel on time, if you don’t want to continue to use the service.

I really like the concept of VPS, and I’ve had different services running earlier - but I already have the domain on a regular webhost, and have to keep it there for various reasons. I know I can forward the url to a VPS, but that’s more expenses that I don’t need. But it’s a fun thing - running your own virtual computer online!

If you’re using jekyll, why not do github and skip VBS? This is a legit question. I am not familiar with the details. 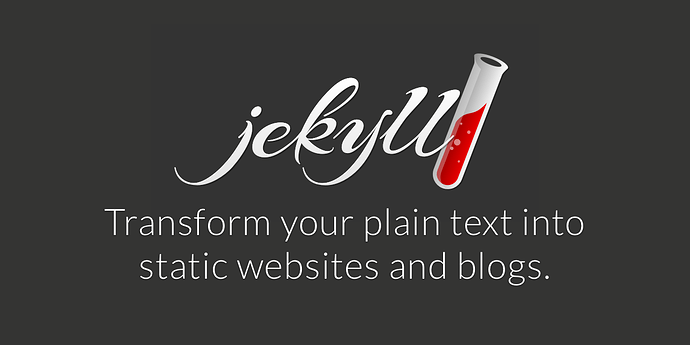 GitHub Pages are public web pages for users, organizations, and repositories, that are freely hosted on GitHub’s github.io domain or on a custom domain name of your choice. GitHub Pages are powered by Jekyll behind the scenes, so they’re a great way...

But it’s a fun thing - running your own virtual computer online!

It sure is, especially if you have services running 24/7 and don’t want to keep your home computer on overnight or when you’re away. It’s also super neat that you can pretty much install whatever you want (i.e. Ruby, Python, OpenVPN, rsync, Plex, etc.), which is usually not the case for standard web hosting plans. You’re limited to uploading files and maybe create one or two databases.

I have to take a look at Jekyll! Looks interesting indeed. edit: Well - my provider doesn’t suppord Ruby

Jekyll is nice if you want to do some sort of static site generator (requires programming knowledge). How these usually work is, that you write articles for a blog, wiki, or whatever in Markdown and a script converts the Markdown to HTML and inserts it into predefined site templates. The position where variables get inserted into these templates can be defined by Jekyll or other templating engines.
The static site generator then renders your website project and you can upload it to your hosting service. There’s no need to “install” the generator on the server. You can do the rendering locally and simply upload the resulting HTML files.

Thanks a lot for insightful responses, helping me to decide! Nice getting updated on recent trends. Google is not very helpful when it comes to googling keywords like webpage, static, tool, and so on…

I finally landed on wordpress. I feel like saying sorry, since it’s obviously what I didn’t intend to in the first place

Buut, old habits die hard - and installing is easier than ever, and just running it as a static page works like a breeze. Thanks again!

Edit: hmm, I already have to say that I like the newer WP back-end! The editor is simplified a lot, and to me it’s a positive change. The whole experience seems less bloated then earlier, but I still think I should be careful with too many plugins!

Yet another edit: came across Bootstrap. Seems like a great tool! Perhaps a little overkill, as with Jekyll, but it seems a little more amateur friendly

I finally landed on wordpress. I feel like saying sorry, since it’s obviously what I didn’t intend to in the first place

I have not updated my site in a while, but I use Piwigo - Manage your photo collection for my photo collection & it was fairly easy to use. Before that I used jAlbum - Photo Gallery Website Software

I also use Adobe Dreamweaver CS6 for my website building. I got the last version before they went cloud based software.