I love and hate this machine

Not a clue why this happened 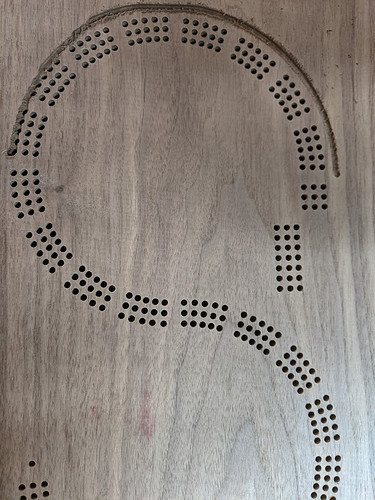 I don’t think so, but which ones specifically are those (Burly)

the screws in the connector affixing the stepper motor to the leadscrew.
i would also check the screws that attach the pullies to the steppers while i’m at it

Calling for the wizards, @jamiek and the forensic team

This looks like a single event that cause a massive loss of steps…router hit the clamps, truck got hung up on something, bit slipped down and got stuck in the hole, something caught in the timing belt, etc. This is not the behavior I see with loose grub screws though it wouldn’t hurt to check them.

it didn’t hit the clamps…and the cut didn’t get deeper, so it shouldn’t have been the bit slipping…

As I look closer there is a weirdness here. I though originally it happened between sets of holes, but it happened during a set of holes. And I assume that the offset block was to be another 5x3 block, not 7x3. Another possibility is that you have overheating drivers. I’m grasping at straws here. Can you attach the g-code file for me to take a look at?

It looks to me like it just lost steps on the cross grain cut.

In my opinion the feedrate is probably too high.

I think it is better to use a lower feedrate and deeper cut. I commonly use 10mm/s and 5-6mm doc. Ryan is fond of pointing out that every build is different, and I have a Lowrider not MPCNC, but these settings have been reliable for me. If I try to cut any faster I’ll get lost steps every once in a while.

I think the slower, but deeper cut is better for a couple of reasons. First, the steppers loose torque at higher speeds, making missed steps more likely. Second, cutting deeper spreads the cutting load over a larger portiong of the bit, reducing wear on just the tip.

It happened on the external cut, not on a cut of holes.

I can try that. This is already slower than what was working fine in the past.

My experience was that a little faster (maybe 12mm/s) would work most of the time, but would lose steps occasionally. I backed off to 11mm/s and only had issues on rare occasions. The 10mm/s rate has been very reliable for me though.

I think the cross grain is a higher load cut. Also, when the cut is parallel to one axis, then only one axis steppers are engaged. A diagonal cut runs at the same feedrate, but with the load on the steppers for 2 axis the individual steppers are both moving slower and under less load. A knot or harder bit of grain is sometimes just that tiny bit too much load. I think that is why it may work fine at the higher feedrate most of the time, but loose steps every once in a great while.

The material is a factor too, of course. Oak, Ash, etc are going to be harder to cut than pine or poplar, but I’ve just settled on the one feedrate/DOC combination that has been consistently reliable for me.

If you’re doing a through cut, a 10mm/s X 5mm DOC is actually going to get done faster than 15mm/s at 2.5mm DOC, as it will require half as many passes.

Like Ryan says, every build is different. You might try just dropping the Feedrate 1 or 2 mm/s and see if that’s better. You’ll probably have the occassional failure until, eventually you’ll find a reliable feedrate / DOC combination for your machine.

I missed the whole point. Sorry. Lost steps for whatever reason…grub screws or feedrate too fast, etc. are the most likely cause. I saw the last set of holes with a different array and offset and assumed that was the start of the problem. Obviously I don’t play cribbage.

Are you using the firmware/gcode that includes Arcs ? Do you notice if the machine pauses during the curvy part at any time?

Not sure, though I haven’t updated firmware since this was working… made about a dozen of these over the holidays.

It’s also possible that a stepper driver might be overheating. It looks to me like the X axis is cutting out very briefly but repeatedly, causing a diagonal stair-step shape. If the room is warmer than it was for the other dozen copies, or if the controller is now covered in dust, that might explain why it succeeded before and fails now.

The good part about that you might be able to confirm the issue by running the job up in the air and seeing if it sounds and feels intermittent near the end, without ruining more wood. But if it doesn’t replicate the issue then you might be back to trial and error with feedrates.

Run the job in foam. That’ll help remove the hardness of the material from the equation.

I don’t know. There was a lot of work done recently on Marlin to get arcs working more fluidly/better.

I’m still running an older firmware. if I turn Arcs on, the machine pauses in the middle of each arc to calculate the next batch of steps. I’ve had this cause issues with arcs not cutting correctly. If I disable it, then the CAM will produce gcode with little bitty movements through the curve instead. It seems to cut more fluidly.

I haven’t noticed that. My Marlin firmware is likely a bit old, I ordered the parts from Ryan in
Apr, 2019, and haven’t flashed it. It’s running whatever it came with back then.