Sneak peak, I am about to plug it in and start running some test parts. So far I only need to revise 2 parts just a tiny bit. I will go through the changes in a few days, but it is just changing some things about the first release I wasn’t super happy with, and a few that you guys found. 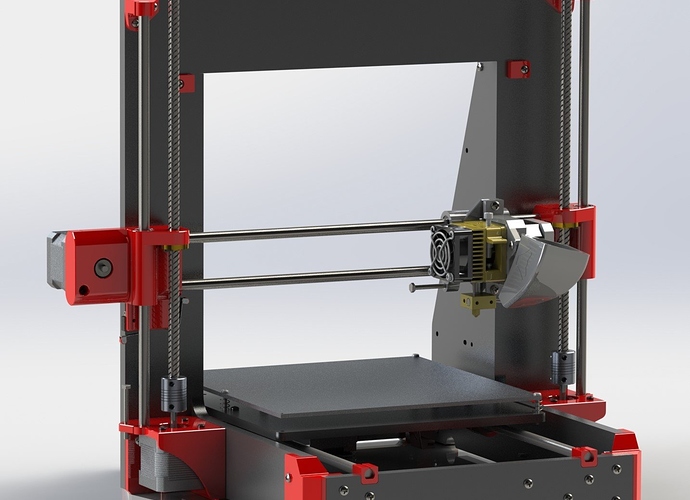 Awesome. Can’t wait to see how it works out.

Those screws on the front are so ugly! JK.

That looks stout! You should carve out a logo or the name on the front. Something with the MP3DP letters, with lines coming off them like this: OK, it’s your printer, you can do what you want with it. I hope it works out. Do you have a mount for the MK8 extruder? I was thinking about trying to find some 3/8" high-quality plywood for a new MP3DP, and I think it would be useful for projects in general. Either BB or Luan, or maybe something with a nice veneer, like walnut. I feel like I’ve been saying that for a year now.

That mount works for the MK8 as well! I just had this one laying around so it is too expensive to not be earning it’s keep.

If you can find some 3/8" it is ideal but can easily handle 1/2" or less. I was looking for aluminum/fiberglass honeycomb panels. (still am) 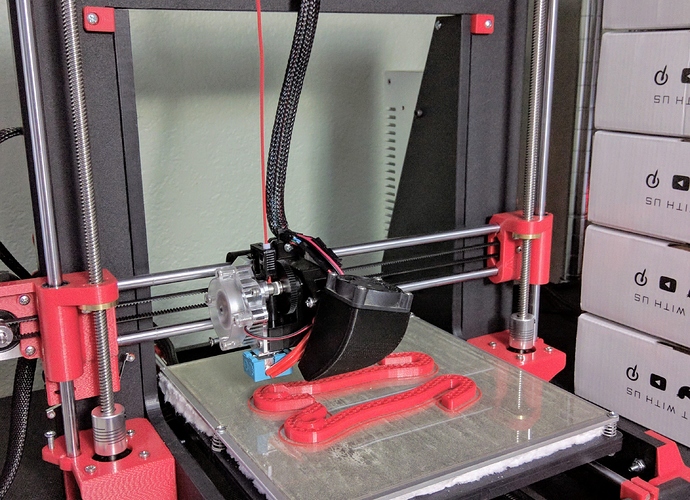 Only five boxed of PLA to go before you’re sure.

I need a physical storefront, I have 52 boxes on hand but it isn’t worth the price of shipping to offer them on the site.

I am putting the printer to work right away, torture testing. Using it to catch up a little on MPCNC/LowRider prints, then print the revised set and release them.

If only there was a solution to the traveling salesman problem…

Or the Uber of Shipping, some sort of distributed networking for packages. Or just cheap rent.

If only there was a solution to the traveling salesman problem…

There is a show on Netflix called “The Secret Rules of Modern Living: Algorithms”. One segment of the show, they used bees to solve that traveling salesman problem. They put out a course for the bees to see how they solved the problem of collecting nectar with the shortest route. The bees found a more direct route after several tries, but did not get the perfect answer. It is a pretty interesting show.

Are you still using three linear bearings under the bed? I see the Y axis belt has moved quite a bit to the side. Any issues with side load torquing? I like the new placement for the X and Z screws and using a flat head instead of pan head. It also looks like you’ve sourced different springs for the bed leveling, how are they working? Did you go for the 200W bed or stick with the 130W? I’m guessing the latter since you have the insulation under it, which really isn’t needed with the higher wattage version. I can’t see the electronics, are you using the miniRambo? Is there enough room on the top to inset the display by doing a cutout or would that adversely affect the rigidity by enough to make a difference?

My next build is planned for a Rumba / Diamond head combo and I have a set of the old parts printed, but I might just reprint with these instead. PLA or PETG? Do you have an ‘all routed parts’ layout to do them in one (or two) sheet(s) on an MPCNC? I haven’t yet cut pieces for the next printer so I’m free to do whatever’s best.

GeoDave, That is the kind of thing I love to watch. I just watched a scishow on designs inspired by nature, and they mentioned whale fins as an inspiration for fan blades, something we never thought to engineer is bumps on the trailing edge but have been on whales forever. Interesting that they didn’t get to the perfect solution though. I need to watch that.

Are you still using three linear bearings under the bed?

Yup, those seem to be good but I find 4 is better in the X slider. You can always add a double long one in the side with the single bearing, there should be room.

I see the Y axis belt has moved quite a bit to the side. Any issues with side load torquing?

Doesn’t seem to be the belt is very close to inline with the bearings and I have the heaviest bed assembly ever made on there right now to see if there are any issues.

I like the new placement for the X and Z screws and using a flat head instead of pan head.

New placement is cool but I am going to buy some hex head today, screw heads get the little bur on them and don’t work well after that, and the axis has to be moved to far to make good adjustments. Hex heads will have a nice large surface or socket heads would work as well and be much better to adjust.

It also looks like you’ve sourced different springs for the bed leveling, how are they working?

Same ones as the ones in the shop, I did actually buy a metric crap ton of some other ones and regret it now, when they get here I will put them in the shop as I know some of you don;t like the little guys I use.

I am not sure the import MK3 how would I test this, resistance? I guess that also explains why I have one older bed that I stopped using because it was the Ramps mosfet murderer…

I’m guessing the latter since you have the insulation under it, which really isn’t needed with the higher wattage version.

Since I am using an HDPE bed support on this one I wanted to keep the heat down, as well as energy consumption as mine run 24/7. I got my hands on a little rockwool, It seems to transmit heat pretty well…dang it. I am going to suggest the bed support be made out of 1/4" mdf for heat resistance and weight, and you will gain a few extra mm of Z travel.

I can’t see the electronics, are you using the miniRambo?

I am but there are holes for the ramps, Rambo and Archim as well. I can say the mini is pretty slick just for the fact that I can hook up the cooling fans to the fan2 port and they come on and go off when the hotend is above a certain temp, and I have them running at 50% speed as they normally run too fast. Freaking awesome. I am so over the ramps boards these things feel like alien tech, digipots and more control.

Is there enough room on the top to inset the display by doing a cutout or would that adversely affect the rigidity by enough to make a difference?

You can always add on to the top if you wanted. I usually don’t as I try not to touch the printer to try and keep it nice and tight and I love my little LCD cases. I do want to try some of the OLED screen that are now natively supported by Marlin 2.0. Before they needed to many firmware edits but I can see some will not like the tiny screen. While I am on this subject It is a bit crazy to me no one embellishes the flat parts, I made the first one super square thinking people would go nuts with the shape, no one has. Not even me…I always want to but never do.

My next build is planned for a Rumba / Diamond head combo and I have a set of the old parts printed, but I might just reprint with these instead.

I would skip that giant thing and just use the Prusa style mixing tube, SeeMe CNC sells them if making one doesn’t interest you and the code is already in Marlin. I am sure using the Prusa edition slicer would really keep it simple.

For this I don’t think it matters, I used PLA but anything should work here, no stacked parts so tolerances are pretty wide.

Do you have an ‘all routed parts’ layout to do them in one (or two) sheet(s) on an MPCNC? I haven’t yet cut pieces for the next printer so I’m free to do whatever’s best.

They easily fit on a 2’ x 4’ sheet, probably even 2 sets. I don’t have a full layout as I was cutting and tweaking individual parts as I went. When I make another I could do a layout I guess.

I am going to include some screw holes on the bottom of the parts that touch the table and a matching flat piece. That way Heffe’s style bottom support will be really easy to do any shape you want with 6 countersunk holes and this thing will be a rigid monster.

The Rumba/Diamond isn’t really all that much larger, it fits pretty cleanly into the 200x200x200 envelope, moving the extruders up to the top edge means the hot end is essentially the same size (or possibly slightly smaller) than the stock MK8. I haven’t looked at the other fan yet though, and it and it’s ducting might balloon things some.

The bed leveling springs look like they’re tapered, the ones you sent with my original order weren’t, hence my question.

I really like to watch the numbers on the display as the print runs, but then I also have a VM showing me power next to the display. 12.3V no load, 11.8V with both the bed and hot end lit. I don’t print from SD so don’t need to touch the display often, so mounting it in the header would be perfect for my use…

Merry Christmas! So, you’ve had a number of days for testing, ready to release parts and layout? I’m still in Skilled Nursing, but expect to be able to head home tomorrow or the next day. I can then get my MP3DP to start on the Mp3DP2 parts. I also have some high density cutting boards ready for milling to make the routed pieces and MDF to fall back on if that’s too thick.

Good to here it, glad the recovery is progressing quickly.

The parts are good, the printer has been amazing, I had both small idlers die though. I replaced them with the same brand just oiled them well and will keep running it 24/7 if they fail again I have to go back to 608’s. I can start releasing parts I guess if I just make that part clear (could be changes and idlers need lube).

If I haven’t released them by the time you are ready, let me know and I will get on it. I have been dealing with web/logo stuff lately while torture testing that printer. I think tonight I will switch from v1engineering.com to V1Engineering.com if that shakes out well I will be on track to start releasing and making some instructions this time.

I was using those exact ones.

or just call it the same thing like I have done with the MPCNC?