It's alive! MPCNC build from Luxembourg

This is my first dive into the world of CNC milling. Super happy with the MPCNC so far, but still lots of things to learn and tweak. 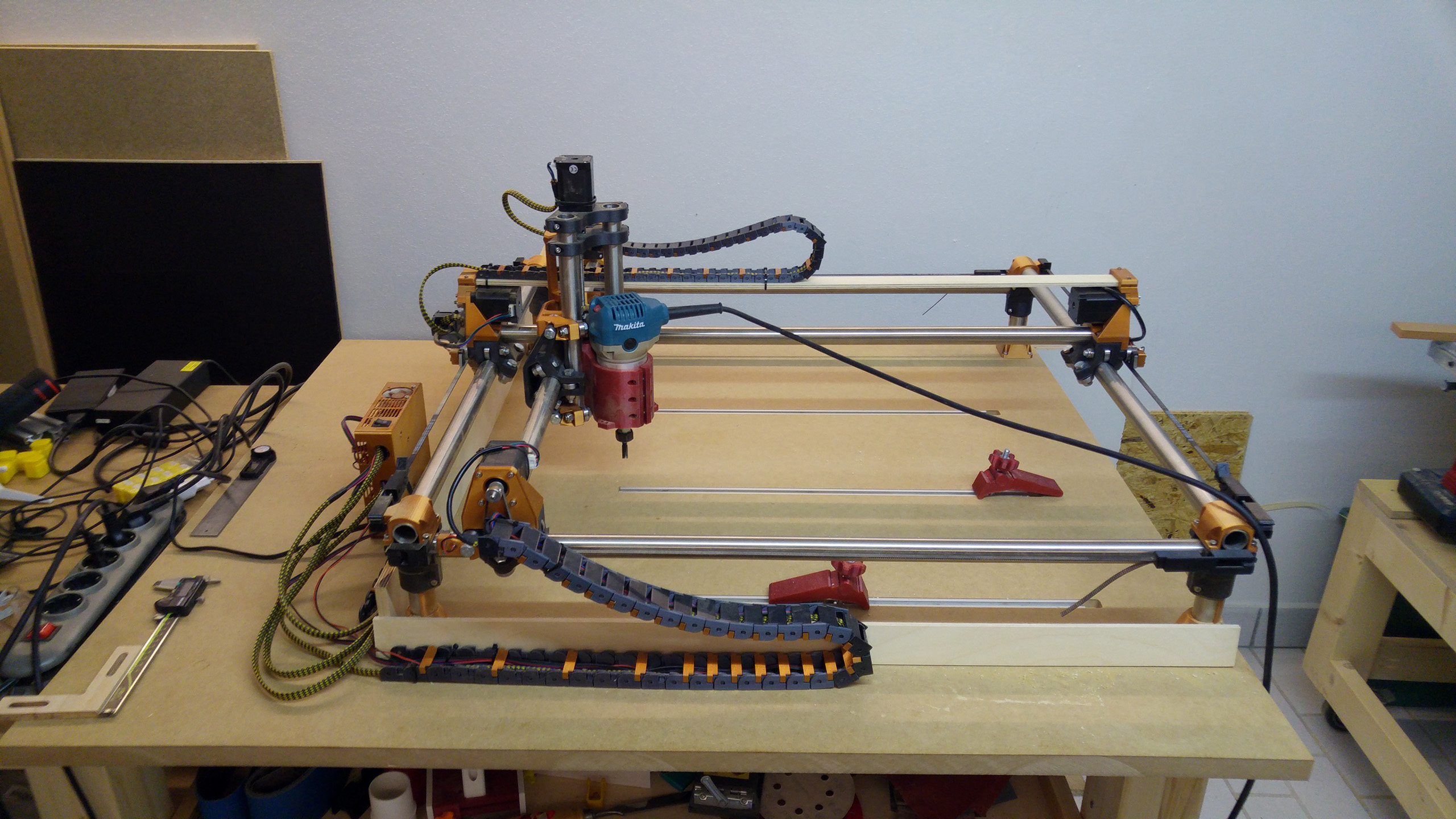 I currently have a working area of 600x600mm. I’m thinking about shortening the y axis to something like 450mm though. This is also the reason why I haven’t cut the MDF base to size yet. I’m still undecided on final dimensions. 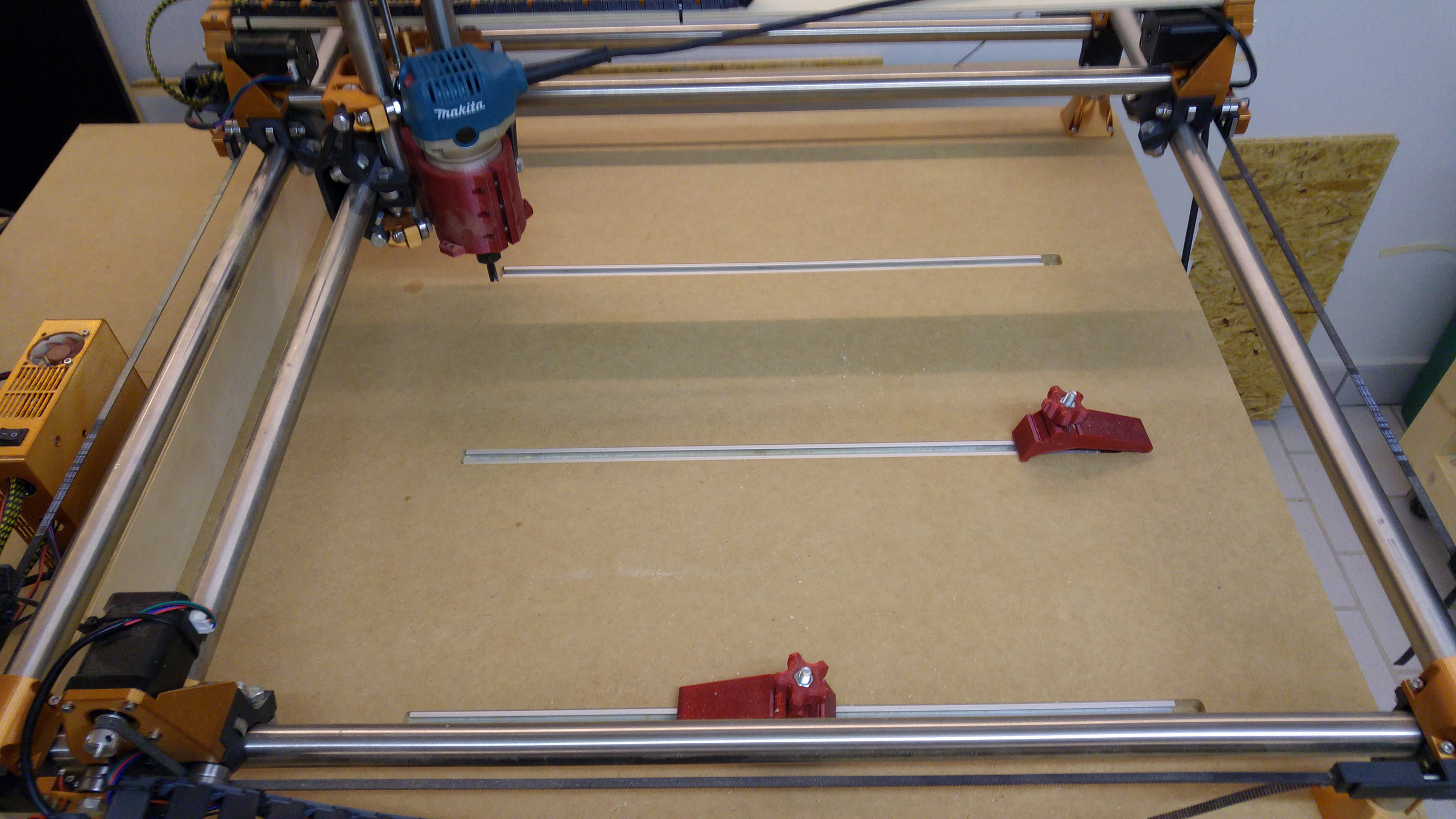 I use M8 t-track slots to clamp down my stock. I’m going to add a couple more tracks so I can more easily reach smaller stock with the clamps. 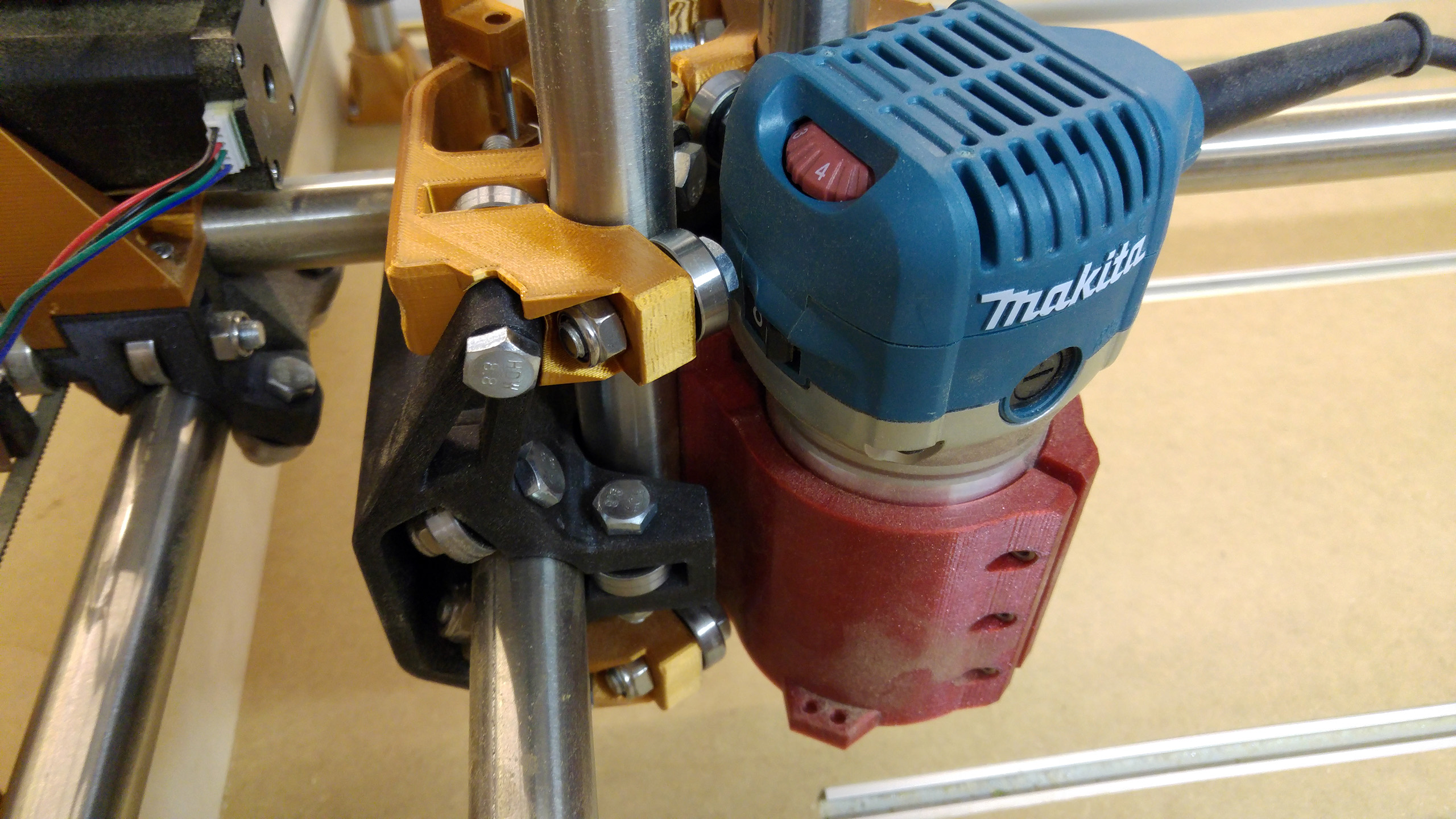 I mounted my router directly to the z-axis tubes, without using the tool mount. 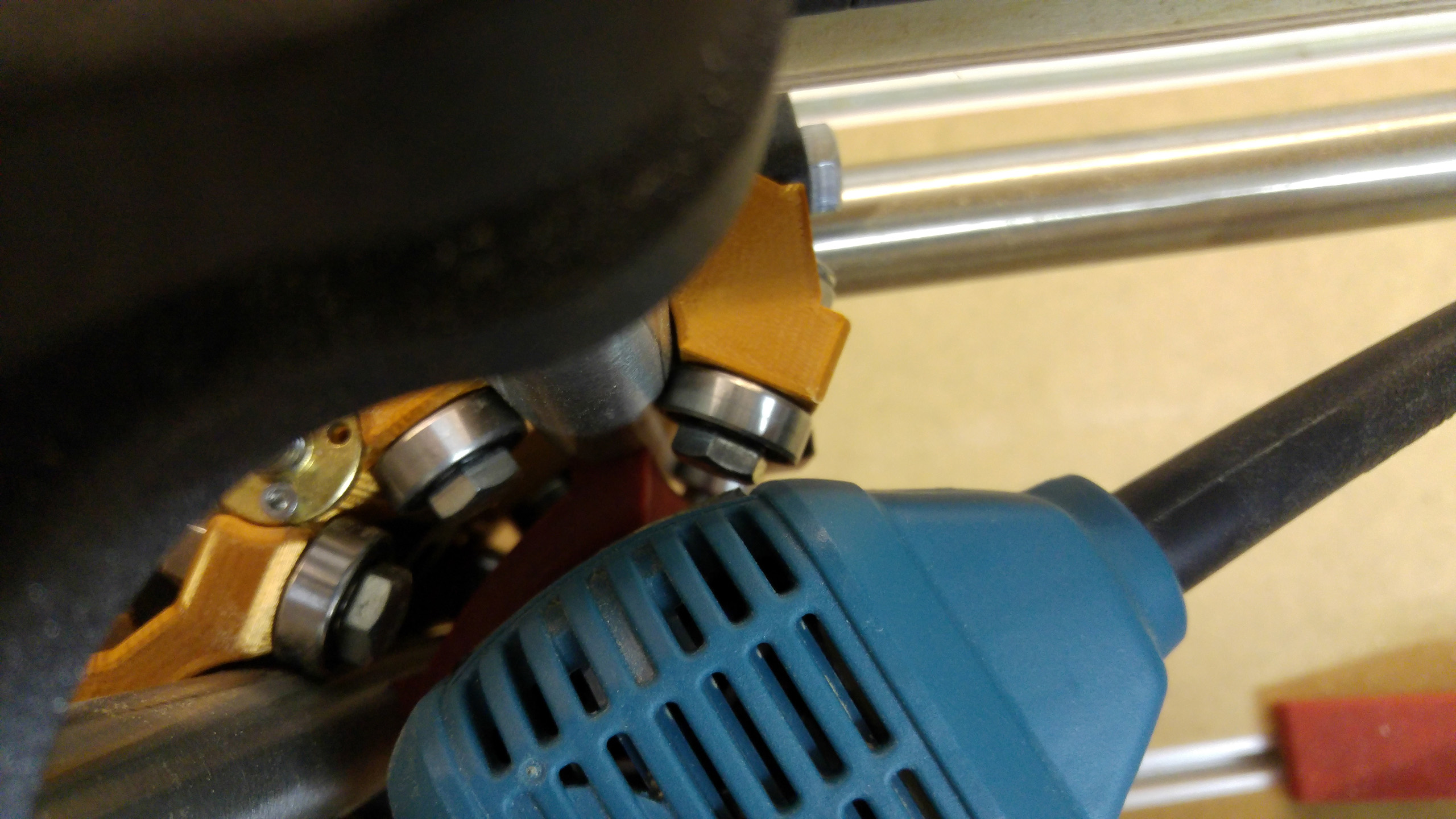 This allowed me to push it a little closer to the gantry.
To be honest, the difference in distance is so low that I wouldn’t do it again. It seemed like a good idea at the time, but I doubt there’s any benefit. 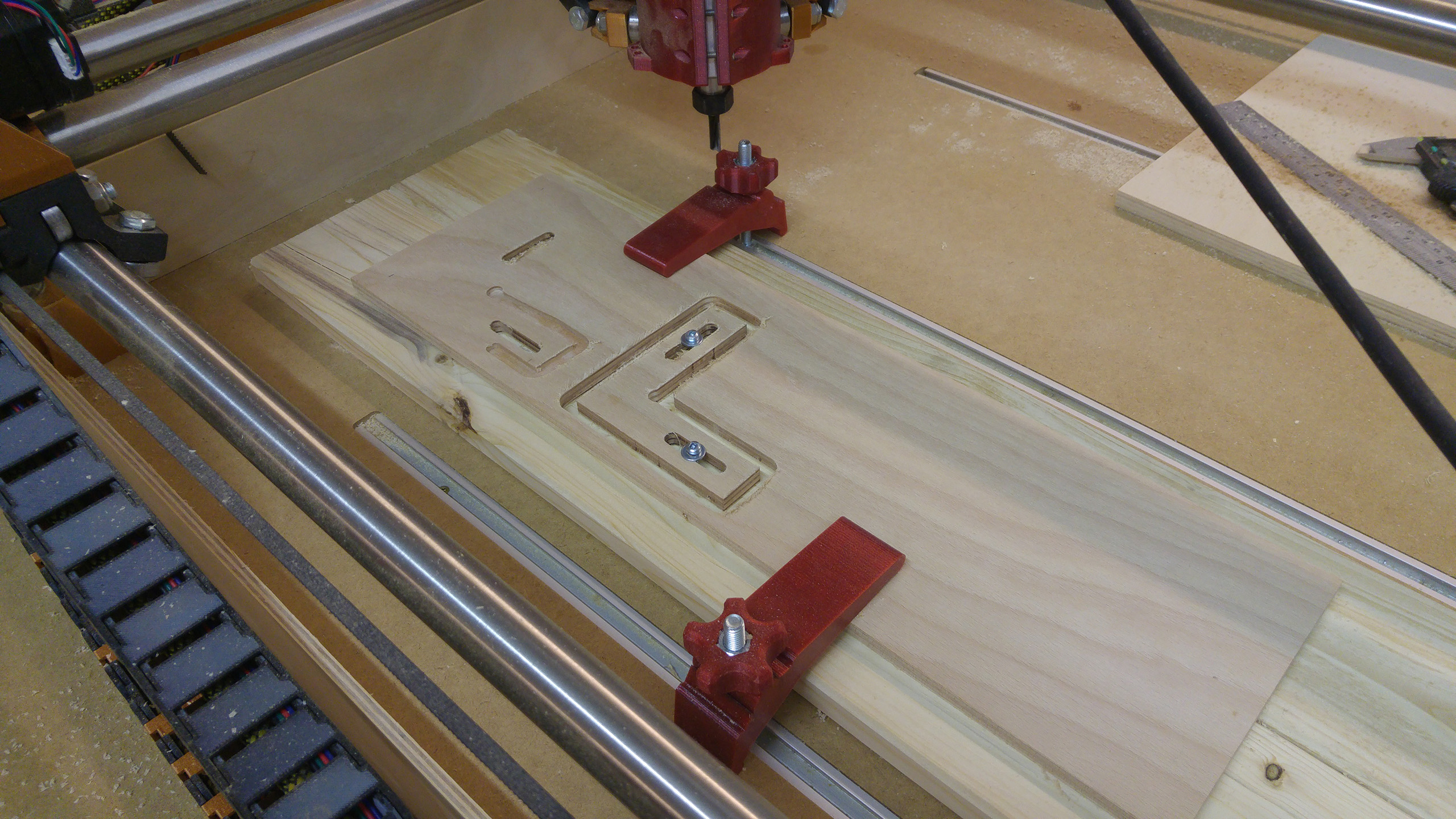 I had to stop the first cut (on the left) due to chatter and the y axis drifting. After further inspection I noticed that I had forgotten to tighten down some of the bolts on the underside of the gantry…

The second cut worked much better!

There was some tear out, presumably because I was using an 8mm router bit. Unfortunately that’s the smallest router bit I own. 1/8’’ end mills are still on the way.

Auto squaring rocks! 90° right off the bat.
X and Y axis steps/mm need some minor tweaking, but this a superb starting point. 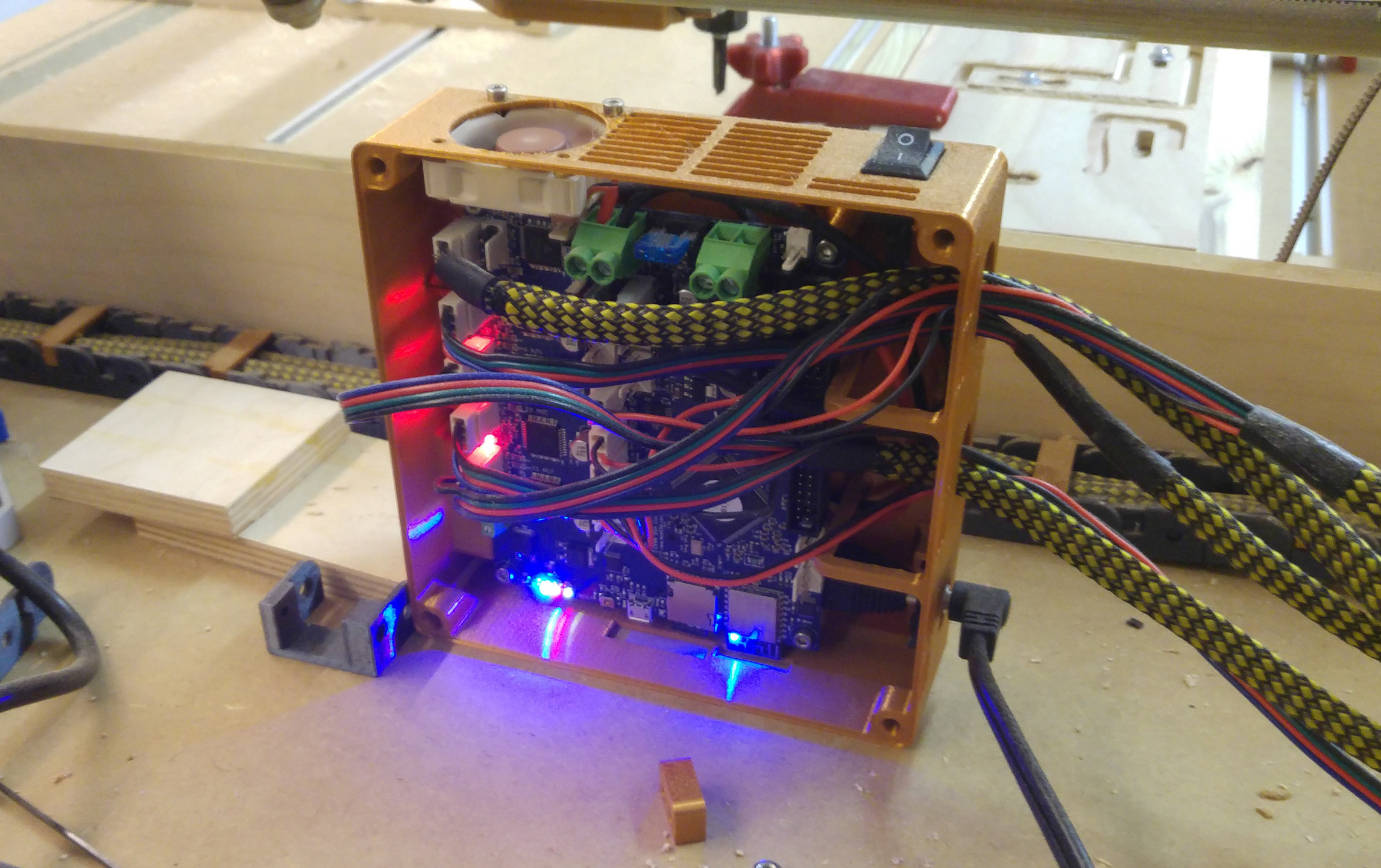 The brains. I’m using a Duet 2 Wifi board. I love how you can reconfigure everything without the need of recompiling / uploading firmware. Everything is configured through gcode.

Some minor issues I ran into during my build:

Since I already owned the duet and the makita router, this was a very inexpensive build. This is such an awesome yet cheap design.

Your setup seems pretty well thought out and you are already get some seriously decent results. Welcome to the Crew.

Congrats ! I also live in Luxembourg and I am considering this build, may I ask you where you bought the pipes and other components ?!?

I got the pipes from here: https://www.metall-kunststoffhandel.de/produkt/edelstahl-rundrohr-25x2-mm-geschliffen-k320/

Unfortunately, they won’t cut them shorter than 100mm, and I’m using 64mm on the Z axis.
I ended up just buying a 300mm piece and cutting it myself using an angle grinder.
Also be aware that they do not come deburred. You’ll have to clean up the edges yourself.

I also made this list back when I was sourcing components: https://docs.google.com/spreadsheets/d/1WyeRwhXcceGOW3yzdSXogg8eyuihRfj_-DrPQ3mrsNg/edit?usp=sharing
Hopefully that should give you some options.

If you go through with the build, feel free to bug me if you have questions.

That’s a much better deal. I wonder how I missed that when I was sourcing my parts.

Found them by accident, ordered a week ago.

I think it’s the cheapest there is for Belgium.

Thank you, very kind of you! I was hoping to find the pipes at some local store, I guess shipping from Germany of a 3 meter pipe costs more than the pipe itself !?!?

Don’t buy a single 3m long pipe. Have them cut it to size for you, it’s free.

I stopped pushing it further because I started to notice some flexing… no chatter though.

Some thoughts on the flexing issue: