What a great journey… first things first: Thanks Ryan for an awesome contribution to the universe of tinkerers and builders.

Then onto the specifics:

My build was “print-it-yourself” on MakerBot Replicator 2 using 3D Solutech Filament. Generally great success, less the inner diameters for holes as entertained elsewhere on the forum. For bolt holes, a reverse rotating 5/16 drill made the difference without materially removing PLA, so I’ve got a snug fit throughout. For the parts like the bottom feet where the outer dimensions aren’t critical, I scaled to 102% and got perfect conduit fit. The first print was using the original corners and resize wasn’t a good option there so I had quite a struggle getting conduit in place. Fortunately this isn’t a problem with the new corners that got out just in time for me to use.

A couple of the more exotic things came from the shop here - the spring, wiring harness, speed washers. Other parts were sourced from boltdepot.com as I had other things to order from there. Coupler nut and threaded rod was picked up at Lowes (<$5), the Arduino was revived from a previous project and a Ramps board with DRV8825s was added. With a 10A power supply, I tuned drivers to 400mV for Z and 800mV for X and Y. This is on the cool side as I’ve got 2A motors. I have a fan ready for active cooling, if that becomes necessary.

The build is a 30’‘x30’’ with 4.5’’ legs as recommended and the conduit was cut to length using a standard tube cutter and cleaned up accordingly. When all components came together practically perfect, it was almost too good to be true.
Motors mounted, I figured that putting the 16T pulley on with the base facing outwards gave two met benefits: I don’t need to remove the motors from the mounts to tighten/adjust the screws and there’s a nice range available to adjust for the perfect flow of the belt.
Wiring up the beast was nothing as I’d gotten the wiring harness. Plug and Play. Before putting the belts on, I fired up Repetier, connected and spun the motor controls. They all do exactly as planned. What!? No way! Yes way!

On with the belts – used GeoDave’s belt clips. When tightening the belts, the clip is drawn a bit sideways as the new corners makes them flow freely instead of aligned to the side of the corner. I’ll probably mix up a version that provides more centered mount for a more direct pull. Anyhow – these clips are already great, so that’s not really important. Now ready for real movement, back into Repetier. Left, right, up, down. It’s alive!!!

I’ve opted for the universal tool mount and started with a pen-holder for it (shout-out to HicWic and karltinsly for those). First print had to be the Vicious logo, so I loaded the provided demo .nc file, jogged the axis to the starting position with the pen just touching the paper. [I haven’t found the best way to reset coordinates, so I hit “emergency stop” in Repetier, which pulls the power from the motors and resets the coordinates.] Then clicked print and voila! One practically perfect logo! For the second attempt, the pen was a bit close to the paper and a little off from the original zero, so the first and only casualty so far is that ultra-fine point sharpie. 

I’ve now made a couple of end to end trials, starting in FreeCAD, then rendered in ESTLCAM and send using Repetier, just to get the hang of it and check out how everything plays together. Lots of moving parts, but it all works. Measurements of a 4cm x 10cm test object showed good dimension accuracy and angles are as close to 90 degrees as I could hope.

While I’ve taken the time throughout to make sure that I knew what was going on, I am so amazed that I’ve not seen any smoke clouds, broken parts, burning wires or cut and bruised fingers so far. Controlling the urge to rush to the finish line has been the biggest problem but the project has been made so easy by you all and your big and small contributions.

What a great start. Thank you all. 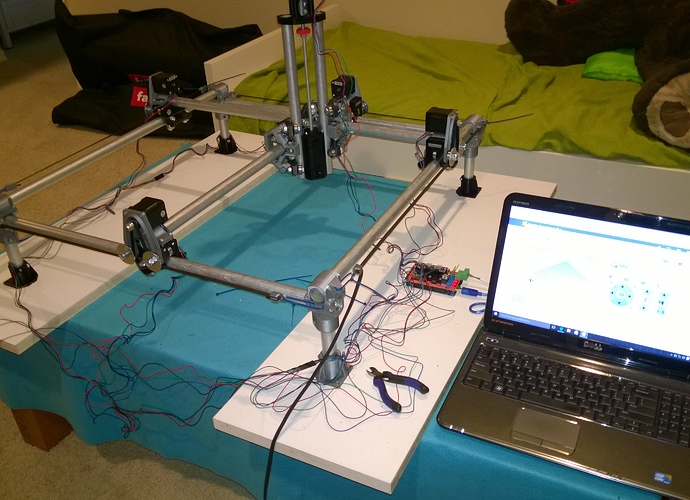 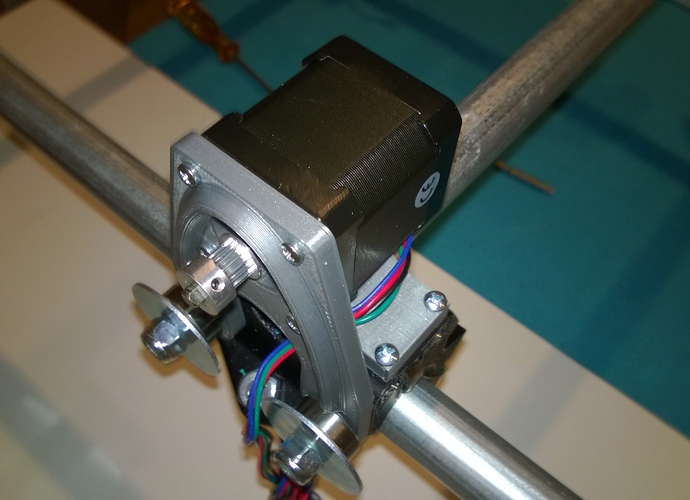 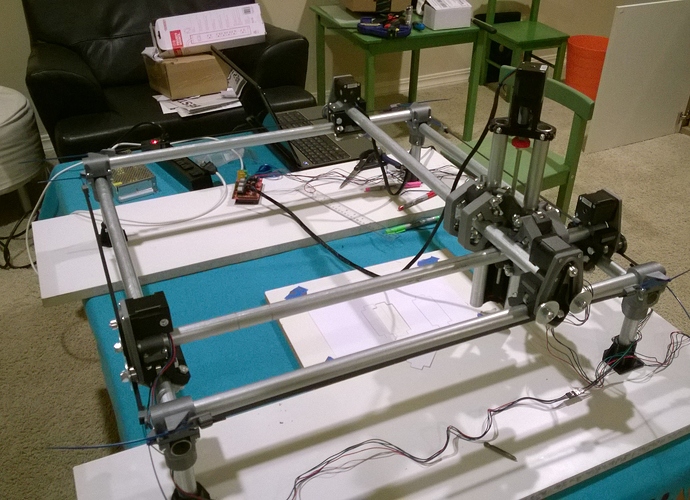 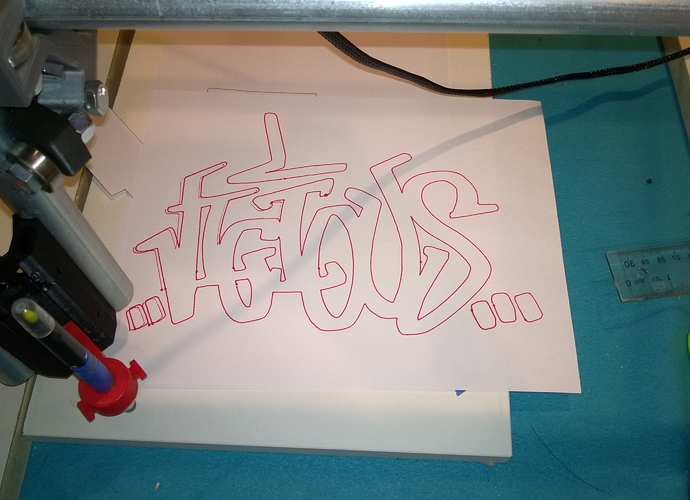 The best part is you can’t really screw up too bad from this point on. Now that it moves you really can’t smoke the electronics and if you break a plastic part somehow, just print another.

Now get it dirty!

First few cuts done with Dremel 4000 and an 1/8th carbide end mill… so now dirty it is. Saw dust all over the table, computer and everything else. Awesome!!!

Given no further calibration, I’ve got some nice, straight cuts within ~1% of the specified size. Depth is a little off - I’ll see if I can come up with some calibration pattern to cut to ensure that electronics and everything are set correctly. Unless someone has some to share already…?

Will have to ensure my rig is reasonably level too. 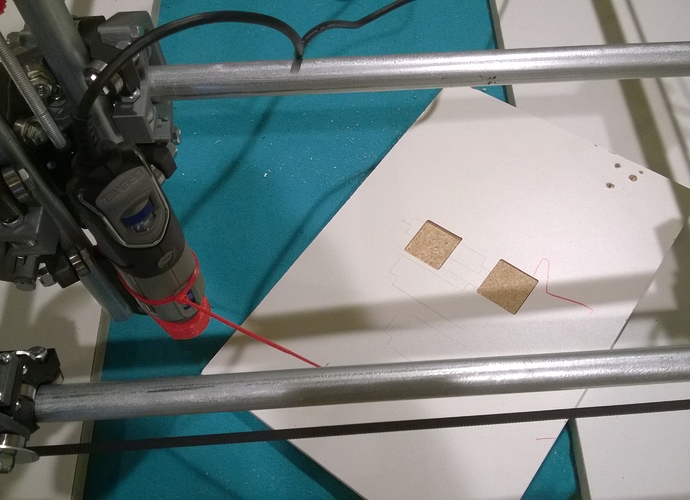 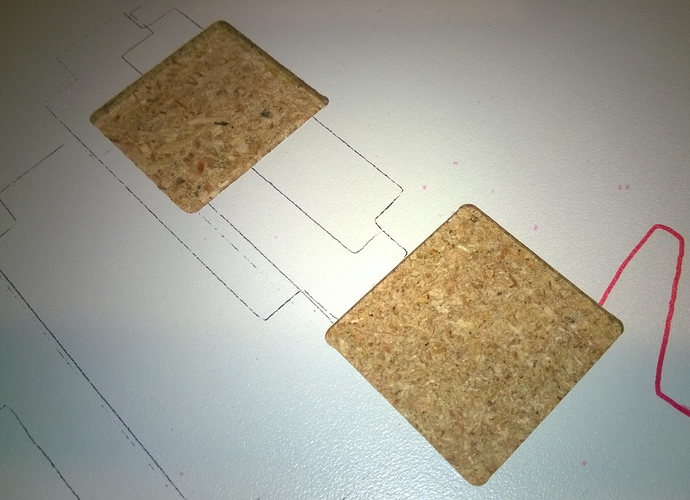