I want to document the build for my next 3D printer, and I took over another topic for a while, but as the parts are rolling in, I want to make my own clean topic. @stewart, I’ve moved over here

I have been following the BOM, and I have a lot of the stuff already. I ended up ordering the screws from bolt depot, and getting a lot of boxes of 100 instead of the 20 I would need. No sense in paying someone to count them when they can just send me extra. I didn’t see the hammer nuts in the BOM, and some of the screw sizes weren’t perfect, so I ordered one size longer for those. I suspect I can make them work. The flanged LM8UU bearings were supposed to take weeks, but they are here already. The only 8mm rod I found was 500mm, so I have to cut those down. It looks like I need it between 444mm-447mm, and I think I can hit that range. I’m going to shoot for 446mm.

I haven’t found any 1/2" square tube yet. Hobby king has been out of stock, and unless there are a bunch on a boat to their US warehouse, my guess is it would take at least a month to get them from there. So I may design the bed mount around another sized tubing, cut it from one plate, or maybe the local metal super market will have something I can fit.

I haven’t used a bowden before, but I ordered a trainglelabs BMG bowden extruder. I’m not sure the dual gears matters with a bowden more or less than a direct drive :). I ordered the V6 hot end from the BOM. I have a similar one and it works great.

I’m going to convert my CNC to the grbl_esp32 board I have, and use the skr with this printer. Hopefully I will be cruising at such high speeds, the 32 bit will matter (but probably not).

I ordered the 450mm 2020 from misumi, as per the BOM, and they were pretty cheap, and I’m happy with the straightness and squareness of the cuts. I doubt I could have cut them this cleanly. 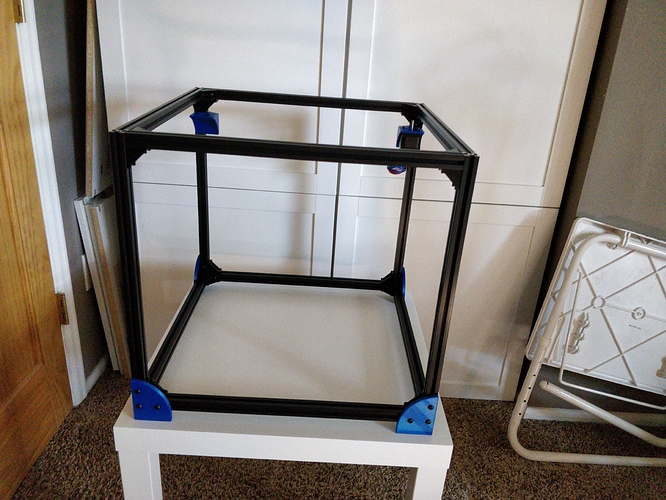 Here is another picture. Wanhao for reference. Going from an 8" bed to a 12" bed, but not much more desk space. 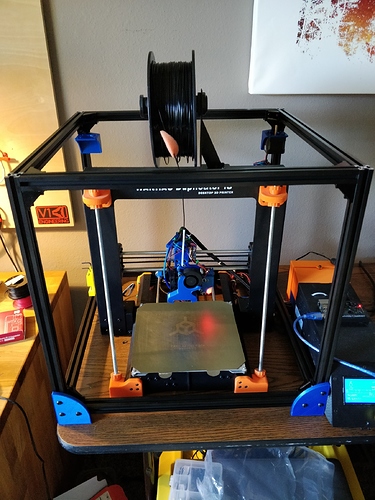 I’m using Joel’s High Five HTPLA from Proto-pasta, but I ran out yesterday. I love the look, and maybe the HT will benefit it for one or two parts. I should have some more coming today.

Obviously, these dedicated shippers are quickly making me look bad. I will have almost all the bought parts, and weeks of making my own parts left.

Image from the CAD drawings: 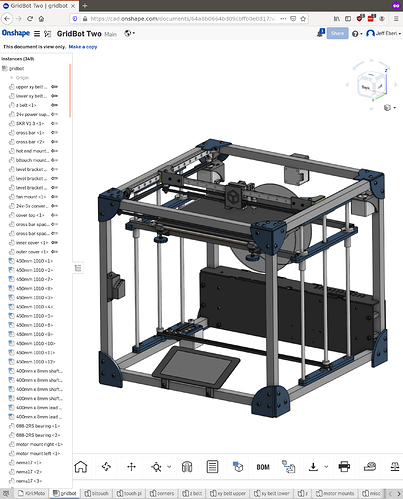 Off topic printer help Random or Off Topic

this is the last 24v bed I purchased. finding a reliable supply of heated beds turns out to be difficult. I have many bed configurations. Mirror tile (pack of 6) with BuildTak on them works great. The Anycubic tempered glass plate, also good. Just recently got a WhamBam flexible magnetic detachable plate. So far so good. In all cases, I have a cork tile under the heated bed. Really helps it heat faster and retain heat. I elected to laser cut most parts from acrylic after getting a Glowforge. T…

@jeffeb3 awesome. I’ll check my lab for 1/2" square tube. if I have any extra lying around, I can send it to you.

But if you hit any snags, don’t worry about it. There is a metal supermarket about 20 mins away, and it would probably cost about $20. It wouldn’t have exactly the same inside profile, but I’m sure it would work. I’m not sure exactly how they dimension the thickness of the tubing, but it says 0.065in, which is thicker than the HK, including the little rib.

I’m really liking this onshape CAD drawing you’ve made available. My Onshape has been limited to one part studio at a time. I need to learn how to make stuff like this. All the information I’ve needed has been right there so far. I’ve been exporting the STLs from the assembled drawing, since some of them have configurations already set.

I feel like I should say this on every post. But I’m not sure I have even once. A huge thank you for making this and providing it to the rest of us. And also a huge thanks for kiri:moto. You’re a scholar and a gentleman.

This will be exciting to watch. I still haven’t decided If I will make one myself or not.

PS: You may want to add links to all the BOM, Onshape etc. to your first post.

I’ve been considering building a CoreXY printer but haven’t done much research on different builds. What made you decide on the grid.bot vs others like the hypercube?

There are a few things I like about this one. But I haven’t finished it, or built other corexy printers, so I’m not sure how helpful it will be. But, here’s what I like about it:

I wanted to build a corexy and use aluminum extrusion. I am intrigued by the Z belt loop and the bowden extruder. I haven’t used those before.

I was looking at the seckit go. But there are several parts that are not open source (the flat parts) and it hasn’t been in stock. I was also considering the blv mgn cube. It was comparable, but there were a lot of parts to that, and it didn’t seem as easy to edit.

Wonder why they don’t put the extruder on the hot end? Pancake steppers are pretty light.

It seems easy enough to add if I feel strongly about it. I think the motivation is that any weight slows things down, so why not use a bowden? I’ve never used one, so I’m excited to use it as is.

I didn’t want to carry the weight on the x axis. more mass, more potential for ringing at speed. also, less mass = greater speed. so far, I’ve really liked the bowden system. all my previous printers were direct drive. it’s not without downsides, like inability to print things like ninjaflex. but I only ever did that once and wasn’t that impressed. you also need to tune your k-factor (linear advance) more carefully to get clean corners.

It’s easy enough to adapt the head for direct drive, if that is desired.

Cool. The railcore has a bondtech attached to the hot end. I have the parts for a flex3drive, but haven’t purchased the hardware yet. I’m zipping along at a max of 100mm/s now, and sometimes hear the extruder skip because it can’t melt fast enough. My rostock max had a bowden and was kind of a pain to get the retractions right.

I routinely print around 120mm/s with non-printing moves around 160mm/s to 180mm/s. Obviously this works better with larger parts because acceleration is a factor.

Which hot end are you using?

e3d v6 https://e3d-online.com/products/v6-all-metal-hotend (24v) … for faster printing you have to crank the temp to 230+ depending on the material. also, for the last 3 years I’ve been printing almost exclusively in Ziro Carbon fiber . It is hands-down the best filament I’ve used in 7+ years of printing.

Does the carbon fiber filament tear up your nozzle?

it’s not that aggressive. it shows little to no warping or oozing with excellent layer bonding and strength. basically, it’s just incredibly reliable. i start and run prints and almost never check on them.

Does the carbon fiber filament tear up your nozzle?

Never used it myself but here is a CNC Kitchen test result of 300 g of carbon fiber filament. Link takes you directly to results in the video.

the carbon filament in that test is high temp petg-based so quite abrasive. the ziro CF is PLA and much less aggressive. I think the CF in the filament serves more to give it admirable reliability characteristics than super strength. it’s just not that brittle compared to others i’ve tested (and largely disliked). one exception is that I tried super expensive ($150/kg) markforged CF (true CF filament) which requires a temp of 280C just to get started. prints beautifully but will destroy a non-hardened nozzle. 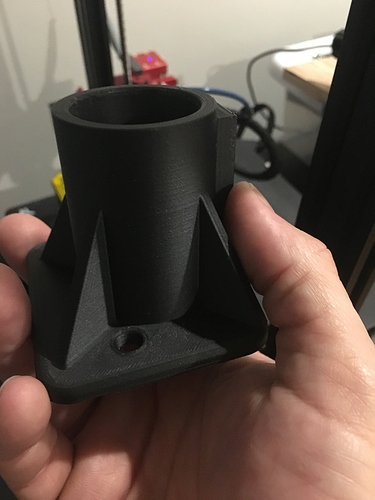 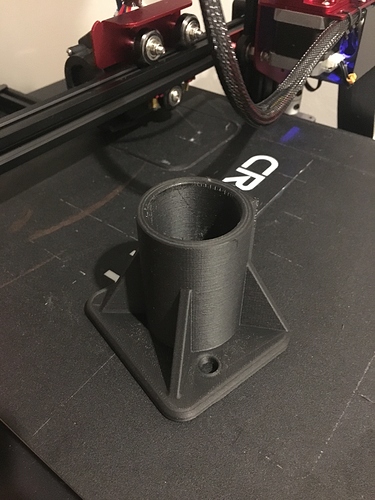 Jeff I will be watching your build very close. I love the design…Thank you @stewart.
Once I’m done with my basement I will start a build. I can use another printer…(don’t tell my wife)…