Just a refresher, I have this for a CNC:

Previously, I had a 2.5W laser, but I never made it very far on the progress bar.

Previously, I had designed a mount. I am using David’s air assist mount (but my air pump is puny, I hope it is enough).

Here’s what I did today:

I would like to introduce my fakser (fake laser). It is an LED (white) with an inline resistor and some Dupont cables crimped to the end. I used this today to debug WTF was going on and I will leave it in the CNC drawer for future use. 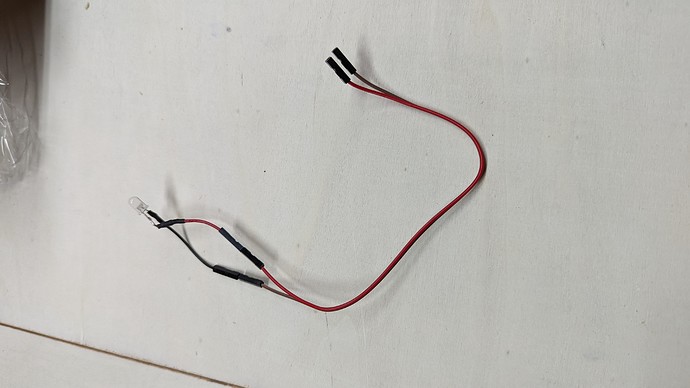 At the end of that, I have a scorch mark in some scrap plywood: 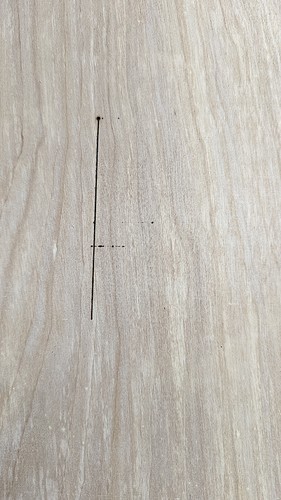 I am already impressed and terrified by this thing. That was 40% power and 1000mm/min, with random focus.

What are my next steps? Run the focus gcode script to get a good Z. Then install light burn and cut some shapes? I need to find some dinosaur shapes. I need more dinosaurs in scrap wood.

There are some nebulous warnings about running this laser module at full power for longer periods of time, so I usually scale back the power and speed for longer cuts (over 30 minutes).

I look forward to seeing your creations.

Robert, you are a gentleman and a scholar. Thanks for the tips.

Welcome to the club. Lasers are great.

Anyway, hopefully your Neje kit included a little PWM module… I’ve gotten several of them with my several orders from Neje [20211103_185220] I lay the laser module down flat on the worksurface, connected to the PWM module (it reads 001, photo timing drops one digit), and +12V power… that’s all that’s needed. I use a wooden block and ruler and slide the laser module…

Once you find the best focus, measure the distance from bottom of housing to target block. Then go print a plastic gauge block, or cut a length of dowel with your miter saw, and you can quickly set focus for any thickness of material.

Welcome to the club. Lasers are great.

Thanks. I need to make something at least 2D before I feel comfortable joining your club

That seems like a nice way, but I have all these motors and stuff. I will definitely be trying to make a setup block as soon as I can. I might reference the bottom of the LR plate, because everything is rigid from that, and it will be easier to measure from.

To unleash your Neje laser power for cutting, and make your engraving cleaner, do not forget to add air assist, it makes a huge difference.
@dkj4linux have made a nice design you can 3D print, If you already own a real workshop air compressor then Neje’s official air assist kit is also very good.

That seems like a nice way, but I have all these motors and stu

I still have all the parts to add a z to my engraver so I can touch off the material for z height. I need to get around to that project one day.

Yeah, thanks. I have that print hooked up to an aquarium air pump. My pump is just an old one though. I will see if it is enough.

Nice! Any chance you could post a pic of the gantry with the laser mounted? I’m jealous…
A laser on my Lowrider is on the wishlist.

I will next time I am in the shop.

This is the mount though: 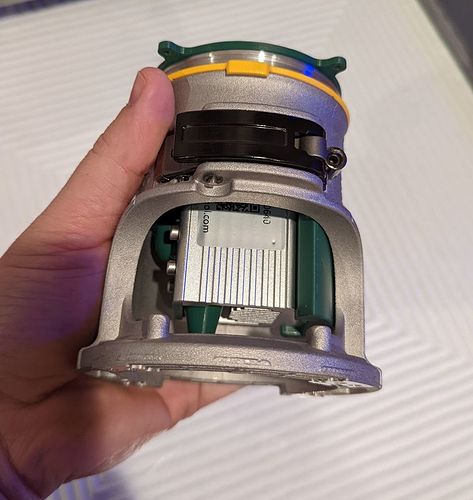 That’s brilliant. I was always thinking of hanging the laser off the side of the baseplate. Swapping it out of the mount makes a ton of sense.
Hmmm…I’ve run the router power cord through a sleeve so I’d have to reorganize all that. And print a version for the makita sleeve…but still. So much cleaner!

I am pretty proud of it. I spent a good few hours measuring with calipers.

I cut my router cord and installed a plug on both cut ends so I could use the router elsewhere with an extension cord, so I leave the cord in place.

I could just bolt on another router base

. Then I could do the same with dual routers!

That takes the ATC to a whole nother level.

I hope I’m wrong, but if what I’m seeing is your router base with your printed laser mount bottomed-out in the base and my air-assist nozzle on a Neje A40640 laser module… and that’s all gonna be bolted down to your LR tool plate of some several millimeters thickness… I don’t think you’ll be able to get close enough to the workpiece to obtain focus, with everything positioned as shown.

I made the nozzle to extend about 15mm IIRC below the module’s housing skirt and with the fixed focus distance on the A40640 at 20-22mm, that would put the actual focus point at just 5-7mm below the tip of the nozzle… and I don’t think you can get there from here. 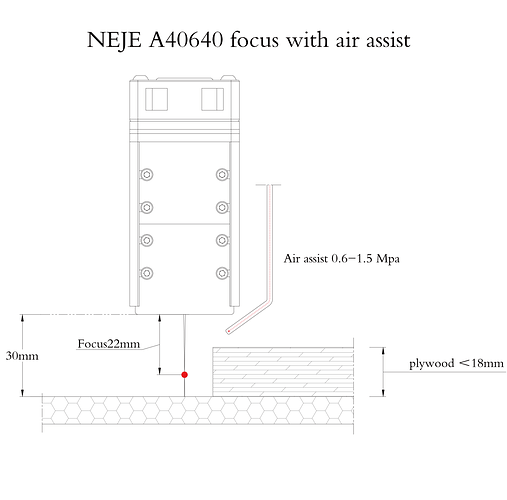 I don’t have any idea how much up/down adjustment you have in the mount… but you’d have to get the nozzle’s tip even with or below the underside of your LR toolplate just to get 5-7mm from the workpiece surface. Do you have that much adjustment? Maybe in the router base itself?

Again, I sincerely hope I’m just a senile old man… speaking with no understanding. If so, please forgive me.

That’s close to what I’ve been thinking of making for my makita mount! I hope that one day I’ll go from thinking to actually MAKE it

print a version for the makita sleeve…

I printed up @robertbu 's mount last week. I don’t have the NEJE laser yet though. I did shorten it a bit, so it’s only 60mm tall, but it goes into the mount perfectly.

Don’t worry about it. I can always print another one. I don’t think extra reach will take any time to CAD.

That pic is very helpful. I saw no movers like 17-22mm, but I wasn’t sure where those were measured from.

I still think I am going to be ok. But if not, then this prototype is enough to get the correct measurement. I want to shoot for nothing sticking out past the bottom of the gantry, because the LR has a tendency to sit down when I unpower it.

I will go check it out when I get a break today.