First time posting here, and just wanted to thank everyone for sharing their build experiences and knowledge. I learned a ton here!

Here’s by build. I started with an old table base that had been sitting in my basement for about 15 years. Steel, welded 2" square tubing. I also had a 3D printer I wasn’t using much - a Velleman K8200 - that I “repurposed.” The table is using the Velleman board (Marlin) and a Raspberry Pi zero with OctoPrint for a wireless connection. Table dimensions are 48" x 28" and the “drawing” area is 990mm x 495mm.

The belt is polyurethane steel corded and the pulleys are T5. Even with all touch points using standard 608 bearings, it takes quite a bit of torque to push things around. I think a rubber glass corded belt and GT2 2mm pitch pulleys will help this a bit, and hopefully allow it to run a bit faster with skipping steps (currently maxing at about 6,750mm/min reliably). I plan to upgrade those soon.

It is noisy, and most of the noise is coming from the motors. Any suggestions on how to quiet things up a bit? My preference would be to do what I can by tweaking the settings, if there’s something I can do there. I’d prefer to not replace the controller at this point.

Thanks again for all the help here!

*Since I’m new here, I’m limited to one picture and no links (I tried linking to my album). So, here’s my one picture… 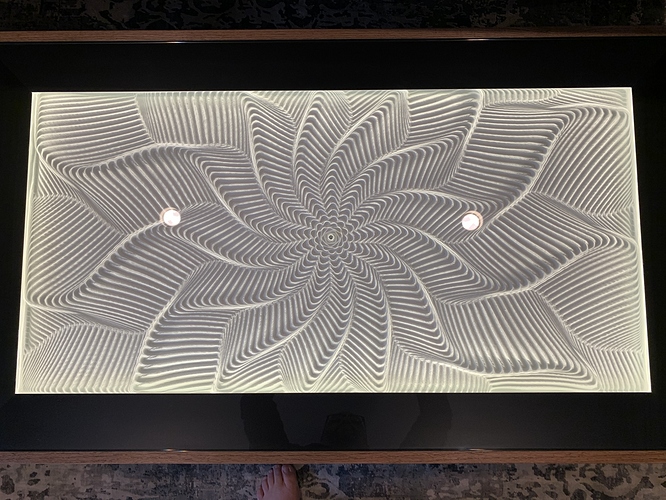 And one more picture… 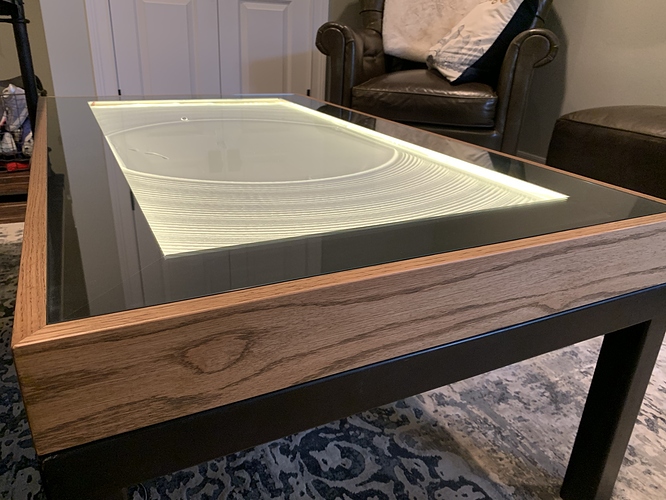 I noticed a remarkable improvement of motor noise when I went to TMC 2130 drivers. I have seen some diode boards that go between the drivers and motors. I haven’t tried them.

Thanks! I’ll look into the diode boards.

Wow that looks great! I am hoping to build a whole dining table out of the Zen soon, I would be happy if it looks half as good as yours.

Bonus points if you figure out how to get it to “print” the menu and name tags for your guests (or place setting help for your little waitstaff).

That may be closer than you think…

Thanks! Really appreciate it.

There are also rubber/metal spacers that can go between the motor and it’s mount that help a bunch with noise.

Well, I decided to go with “all of the above.” I bit the bullet and installed TMC2130s. I installed rubber / foam spacers vetween the motor and the frame. I dampened the metal frame with some Dynamat strips and installed a bottom cover with a foam pad tucked inside. What a difference! 95% improvement, at least. Sometimes I have to look at it to be sure it’s running because it’s barely audible, although I had to reduce the speed materially. I can live with that though - it’s more zen that way!

I also found some 1" heat shrink tubing from the amazon and I wrapped the two static tubes. That also helped with my noise.

These tips will come in super handy! I am using the DRV8825 with my steppers and am experiencing quite a bit of noise. Nothing like when I used an adafruit stepper hat that used PWM at 1.6kHz, but still kind of annoying… So I’ll look into all of the above as well

That looks like a nice build. I hope one day to have the final design of my table looking as nice.

I have a few bits of advice based on my own build and 3D printer experience.

This may not be an issue at low speeds, but at anything over 200 mm/sec, the belt teeth will make a zipping noise as they hit the smooth pulleys. I put twists in the belts to ensure that the only pulleys that the belt teeth contact are the drive pulleys. The smooth back sides of the belts contact all other pulleys. I’m finding that even just hitting the drive pulleys makes a zipping noise.

I am now experimenting with iHSV42-40-07-24 servomotors that don’t cog like steppers so they tend to run smoother and quieter. The torque spec on the 75W motors I am using is low (0.186 Nm), but it’s constant all the way up to 3000 rpm. I was a little skeptical that 0.186 Nm would be sufficient to drive the mechanism, but it turned out to be plenty. Here’s a test video of the mechanism set to run with acceleration at an insanely high 10,000 mm/sec^2 and speed set to a ridiculous 2000 mm/sec. It actually hits the 2000 mm/sec speed on some of the longer runs.

It can never run like that when drawing in sand, but I’m looking at other uses such as attaching an air brush to spray paint on paper or a wall. At the “normal” 500 mm/sec I usually run the sand table, the servo motors seem quieter than the steppers. My testing isn’t done yet, but at this point I’m certain that the servomotors will not limit the performance of the table for drawing in sand.

My table uses a corexy mechanism that has 8 pulleys. I’m finding that the pulleys make a clattering noise as they spin, so I’m considering changing the mechanism to something simpler that won’t use as many pulleys and hopefully reduce or eliminate that noise. I’m also going to add some sort of vibration dampers to the motor mounts to keep motor vibrations from being transferred to and amplified by the machine’s frame.

Thanks, Mark. I referenced your build a few times as I was putting mine together. I really appreciate the advice. I happened to have already made some of these improvements over the last few weeks. The steel polyurethane belts are gone. I swapped out the pulleys for some GT2 2mm pitch pulleys and a glass core rubber belt. It’s so much more flexible. I also changes out the board for a Duet 2 Wifi with 256:1 microstepping. My motors are NEMA 17s but have quite a bit of torque (4800g-cm, 2.5A) so I’m running them at 1.0A and I haven’t had a missed step yet. I’m currently staying under 150mm/sec and the only sound is coming from my linear bearings. I had been oiling the rods with lightweight machine oil, but decided to use grease to help prevent the bearings from rattling. That helped a bit. I’m not hearing much of the zipping you referenced - perhaps because of my relatively slower speed.

The pulley idea is a good one. Unfortunately, my setup won’t allow it. If I started another project from scratch, I’d probably work this into the design.

The Dynamat actually did wonders dampening the metal frame. I initially applied it to only 1/2 of the table to see if it made a difference - and it was very noticeable. Worth it, IMO, if you have a metal frame.

I’m pretty well satisfied with the table as-is. It’s quiet and running reliably. And I like the Duet interface - much better than octaprint.

Thanks again for the advice - very much appreciated!

What are you using for lighting? Is 3 1/2" enough room for the steppers up to the glass?

I’m interested in the lighting too. If it’s too close, it will be bright to the observer. Too deep, and I worry it would make lots of shadows. Or at least how I am thinking of doing it.

Would not shadows show off the patterns better? How about a row of LEDs and a stip of translucent acrylic in front to stop the shining in eyes across the table? Mirrored channel and back facing lighting

That was my thought, it would be like the late afternoon low-angle sun that really highlights the topography.

I’d like to hear about @khgrap’s lighting arrangement. The image in the first post looks awesome to my eyes. It looks like it’s lit from all 4 edges of the table?

I think the edge lit shadowy effect is almost unavoidable…Where else could you put lights?

Back lit is the only other option I can see if one is integrating lighting into the table. I’d be interested to know if / how that works. Seems like the machinery might get in the way and cast shadows…